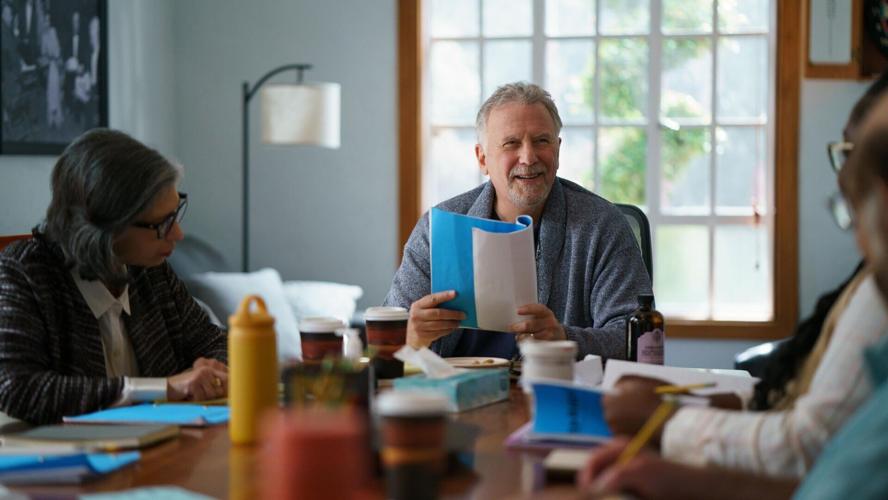 Paul Resier plays the head writer of a TV show that's getting another chance in "Reboot." 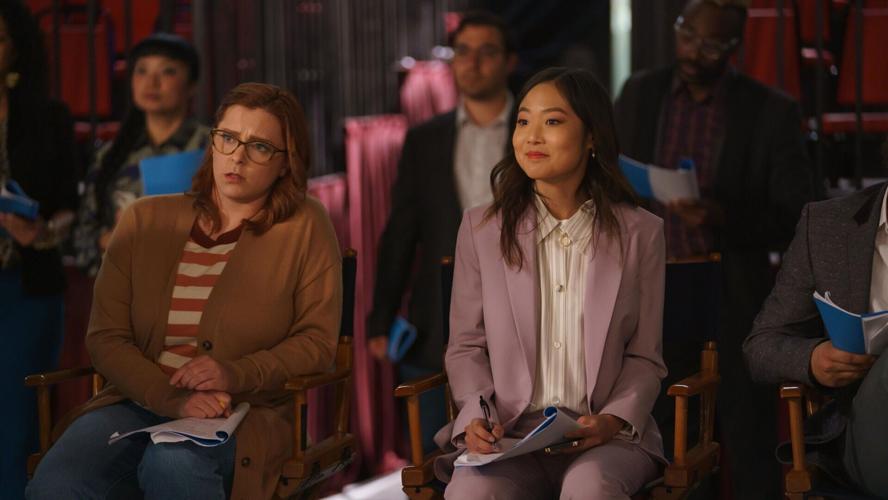 Hannah (Rachel Bloom) and Elaine (Krista Marie Yu) get a look at what the reunited cast is doing in "Reboot." 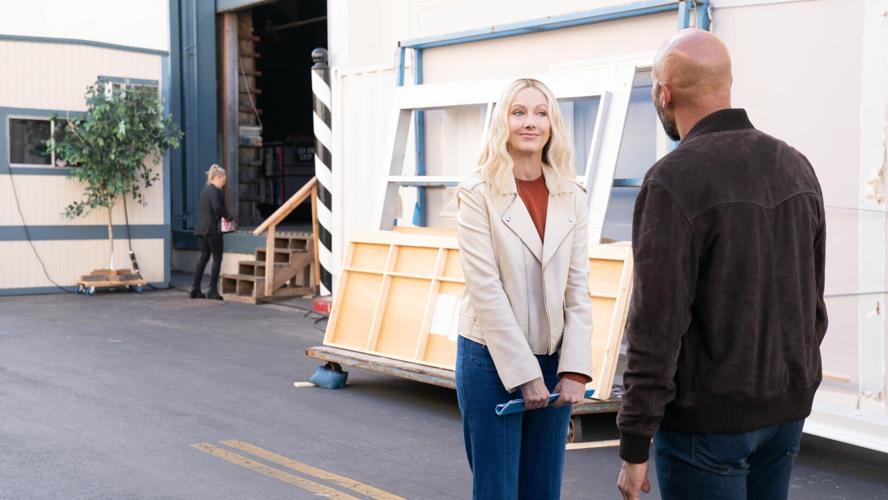 Bree (Judy Greer), and Reed (Keegan-Michael Key) once had a relationship. Now, they're back working together in "Reboot." 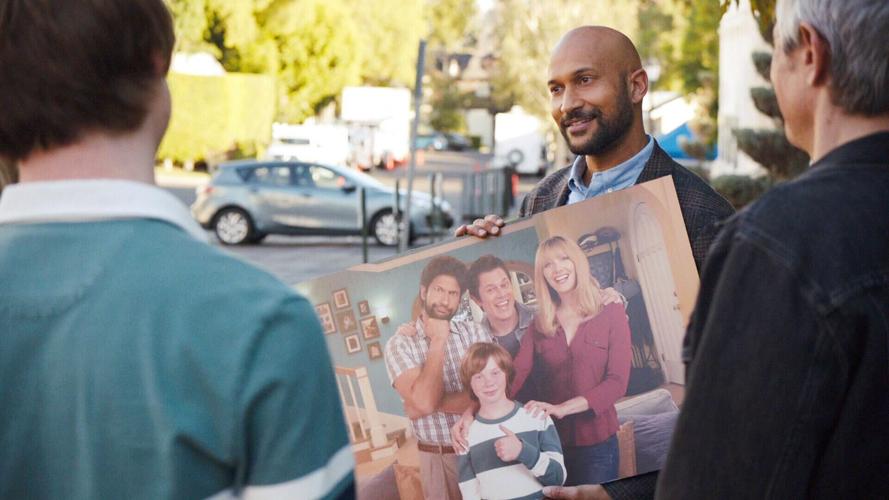 Reed (Keegan-Michael Key) shows others what the cast looked like in "Reboot." 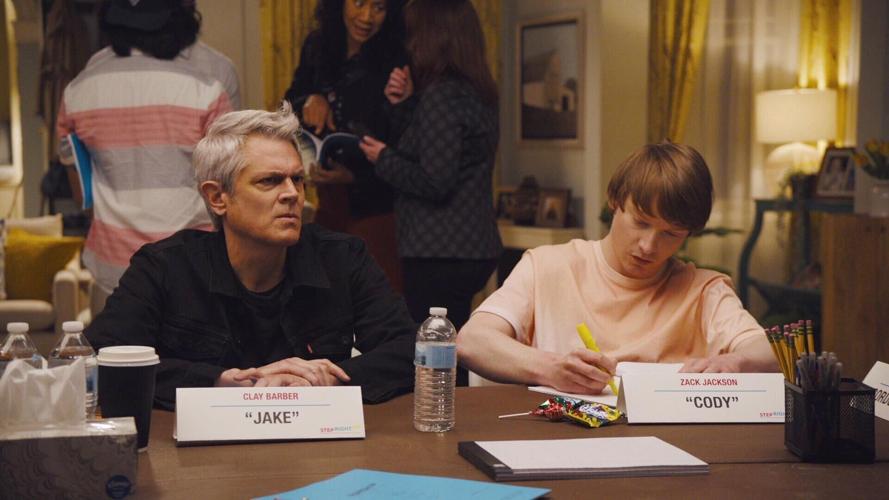 Clay (Johnny Knoxville), and Zach (Calum Worthy) are back at the cast's table in "Reboot."

When the “Roseanne” reboot abruptly ended (and returned as “The Conners”), writer/producer Steve Levitan was curious about life on the set – the show you didn’t see.

That prompted him to write his own “what if?” comedy and drop in enough inside information to make viewers curious.

His take, called “Reboot,” shows what could happen when a network decides to bring back a series that was a hit decades earlier.

“These people are getting a second chance to reboot their lives,” Levitan, the Emmy-winning producer behind “Modern Family,” says. “One of the themes of the show is ‘When life hands you one of those rare second chances, try your best not to blow it.’”

The series: “Step Right Up,” a comedy from the early 2000s that didn’t exactly end in the best way.

The fallout: Reed Sterling left to film a movie; Bree Marie Jensen married (then divorced) a duke, Clay Barber returned to standup comedy (and substance abuse) and Zach, a child star who didn't really advanced much in the intervening years.

The goal: Give it a modern twist and address issues “Step Right Up” once sidestepped.

The only problem? The show’s original creator, Gordon, wants to return to the series and give it that old look.

As the pieces begin falling into place, Levitan pulls back the curtain on ill-prepared network executives, social media influencers and tense family relationships.

A veteran of countless series (including his own “Mad About You”), Reiser says he broke out laughing when the action takes place in the writers’ room and they start ordering lunch.

“It reflects the times we live in and, more to the point, work in,” Levitan says.

“We’d be remiss if we didn’t jump into that and show the contrast and the struggles everybody has,” Reiser says.

When he restarted “Mad About You,” Reiser was adamant it wasn’t a “reboot.” “Most reboots just give the audiences a chance to look at the screen and go, ‘Wow, they put on weight.’ ‘Geez, she had work done.’ ‘Wow, he let himself go.’ I never wanted to be on that side of the conversation. It was a continuation.”

“Reboot,” however, hits all of those notes, showing how contentious it can be when former castmates come back together.

While Levitan isn’t drawing from his own “Modern Family” experience, he has based a network executive on Elaine Ko, one of the writer/producers on his Emmy-winning series. “She read the stage directions for our very, very first ever table read,” says Krista Marie Yu, who plays the role. “So it’s been an honor.”

Worthy, who started acting as one of those kids on Disney Channel shows, says it has been therapeutic to play a former child star. “I know the experience of being a child actor and trying to be an adult, even though you don’t have experiences that lead you to becoming an adult,” he says. “You often miss high school. You missed out on the normal activities that normally lead you to becoming a normal adult. And Zach is frozen in time.”

“Reboot" shows how relationships thawed over the years and what lies ahead.

A sample? “There’s a line of Krista’s that killed me,” Reiser says. “She said, ‘I’m new to comedy.’ And I remember having a meeting at a major network and somebody just became head of comedy and two months earlier they were head of drama. Over the summer? What happened in July? That is, sadly, the way it works.”

It’s too bad the season premiere of “Dancing with the Stars” was limited to those with Disney+ subscriptions.

Betty White’s belongings up for auction: Here are some items you could own

Among the highlights of items from the estate of Betty White are scripts from notable TV episodes, including Part 1 of "The Golden Girls" finale.

Sheryl Lee Ralph: Good things come to those who wait

During the show's first year, creator Quinta Brunson had the luxury of crafting the episodes before any started airing. “This year, we will be in a different situation where we will still be filming and writing when the show starts airing,” she says.

Diego Luna goes back to the future with 'Andor,' a 'Rogue One' prequel

When Diego Luna read the script for “Rogue One,” he wondered what his character might have been doing before the “Star Wars” action began.

'Dancing with the Stars' new season to include Selma Blair, Wayne Brady and more

Paul Resier plays the head writer of a TV show that's getting another chance in "Reboot."

Hannah (Rachel Bloom) and Elaine (Krista Marie Yu) get a look at what the reunited cast is doing in "Reboot."

Bree (Judy Greer), and Reed (Keegan-Michael Key) once had a relationship. Now, they're back working together in "Reboot."

Reed (Keegan-Michael Key) shows others what the cast looked like in "Reboot."

Clay (Johnny Knoxville), and Zach (Calum Worthy) are back at the cast's table in "Reboot."