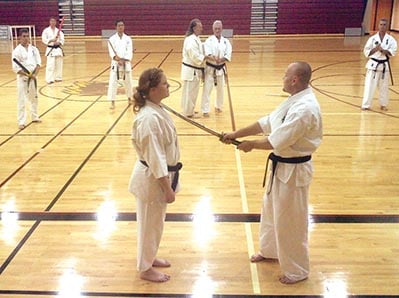 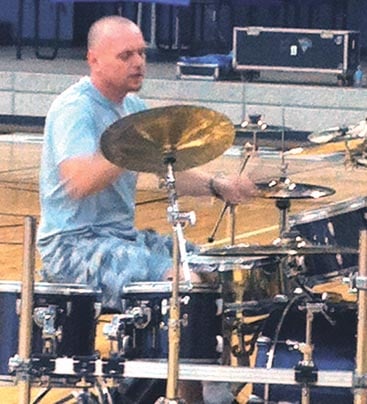 ELKO — Mike Armstrong sat on the edge of his bed in the Red Lion Hotel and felt for his iPhone.

He thumbed through the phone’s assorted menus with the aid of a VoiceOver application, which directs the user by way of an automated voice. After a few moments of exploring, Armstrong finally found the song he wanted to play in his iTunes. The music began and Armstrong closed his prosthetic eyes, while his feet tapped in rhythm on the carpeted floor.

The song was a single performed by Armstrong’s musical group, the Michael Paul Band. Two of the band members are blind. Armstrong is one of them.

He was visiting Elko to present a few workshops and a motivational speech at the Adobe Middle School on Aug. 25.

Armstrong was diagnosed with non-diabetic retinopathy after an injury as teenager affected his right retina. Doctors warned him that too much physical activity could be devastating to his eyesight, but Armstrong was already a second degree black belt in the martial arts.

“Martial arts was a passion and it really helped me grow through some rough teenage years,” he said. “It helped me become a man and changed my life. As I tried to give up martial arts, I found myself in a huge bout of depression. After three months, I decided that I couldn’t live my life like that.”

Three unsuccessful surgeries later, Armstrong was completely blind. His eyes were removed and replaced with prosthetic ones. Despite his inability to see, Armstrong continued to live an active lifestyle.

“I didn’t want to be that blind guy sitting in the room that just sits there and listens to audiobooks or TV and gives up on life,” he said.

Since his blindness, Armstrong has become a fifth-degree Blackbelt in Kyokushin karate, a second-degree black belt in Aiki Jujitsu, a first-degree black belt in Goshindo and Chanbara, and a brown belt in Judo. He teaches these martial art styles to about 50 students in his dojo, the Blind Tiger Martial Arts Academy in Phoenix.

Armstrong has climbed to the summit of Mt. Kilimanjaro, hiked through the Grand Canyon, and participated in the World Team Sports Adventure Challenge. He is also the only blind person to have hiked the entire 807-mile Arizona Trail, a journey that took 57 days, according to the Blind Tiger Academy website.

Armstrong is married with three children and is a drummer for three bands, including the Michael Paul band.

“I kinda joke around about this, but when I could see I would constantly wish for the ability to just do martial arts and music all the time,” he said. “I had to go blind for that to become a reality. I am extremely happy with my life and am in a much better place now than when I could see.”

Armstrong’s music career is about to take off. The Michael Paul Band was recently signed by Howard Rosen, the radio promoter for Bon Jovi, Buckcherry, Fall Out Boy and many other talented musicians.

“Shine,” the song Armstrong was listening to in the hotel room,” is being broadcast at radio stations across the country, he said.

“The biggest thing I want to do is really see my band go far and see if we can inspire people,” Armstrong said. “That’s what the Michael Paul Band is all about, inspiring people. You know, that’s what my life has kinda become: Inspiring my students to push beyond what they think they can do. It’s hard for someone to say, ‘I can’t do this,” when there’s a blind guy saying, “Come on, I’ll do it with you.’”

Historic brewery is making a case for reusable beer bottles

ELKO — One year ago, in the height of the shutdown, Bethany Headley and Neena Moore chose to inspire and encourage others by running the first…

This young man was found on 5th Street and brought to the shelter for safe keeping. He is a sweet... View on PetFinder

The cities spending the most on residential construction

One of the major housing market trends that has emerged from the COVID-19 pandemic is a preference for single-family housing, and this increased demand is driving a surge in new home construction.

Simple and adaptable strawberry-almond crumble bars great for breakfast, a snack or even dessert

Try these strawberry-almond crumble bars. They are incredibly easy to make and endlessly adaptable to whatever fruit is in season.

Busch will pay your pup $20,000 to be official dog brew taster

Busch is sniffing around for a "chief tasting officer" for its Dog Brew, a canine-friendly, alcohol-free bone broth. It comes with a $20,000 paycheck.

The best-paying cities for electricians

Electricians can enter the field without four-year degrees and can instead opt for a less expensive trade school education or an apprenticeship that allows them to earn while they hone their skills.

Professor Hanington's Speaking of Science: The science of ketchup or catsup

If I’m on the go and buy a fast food lunch, one of my favorite practices is to squeeze out a pile of ketchup from a few of those red and white…

Safety regulators warned people with kids and pets to immediately stop using a treadmill made by Peloton after one child died and others were injured.

Vertical Harvest is raising food and futures in Wyoming

The urban farm uses hydroponics to grow microgreens and commits to job-creation for adults with developmental and intellectual disabilities.