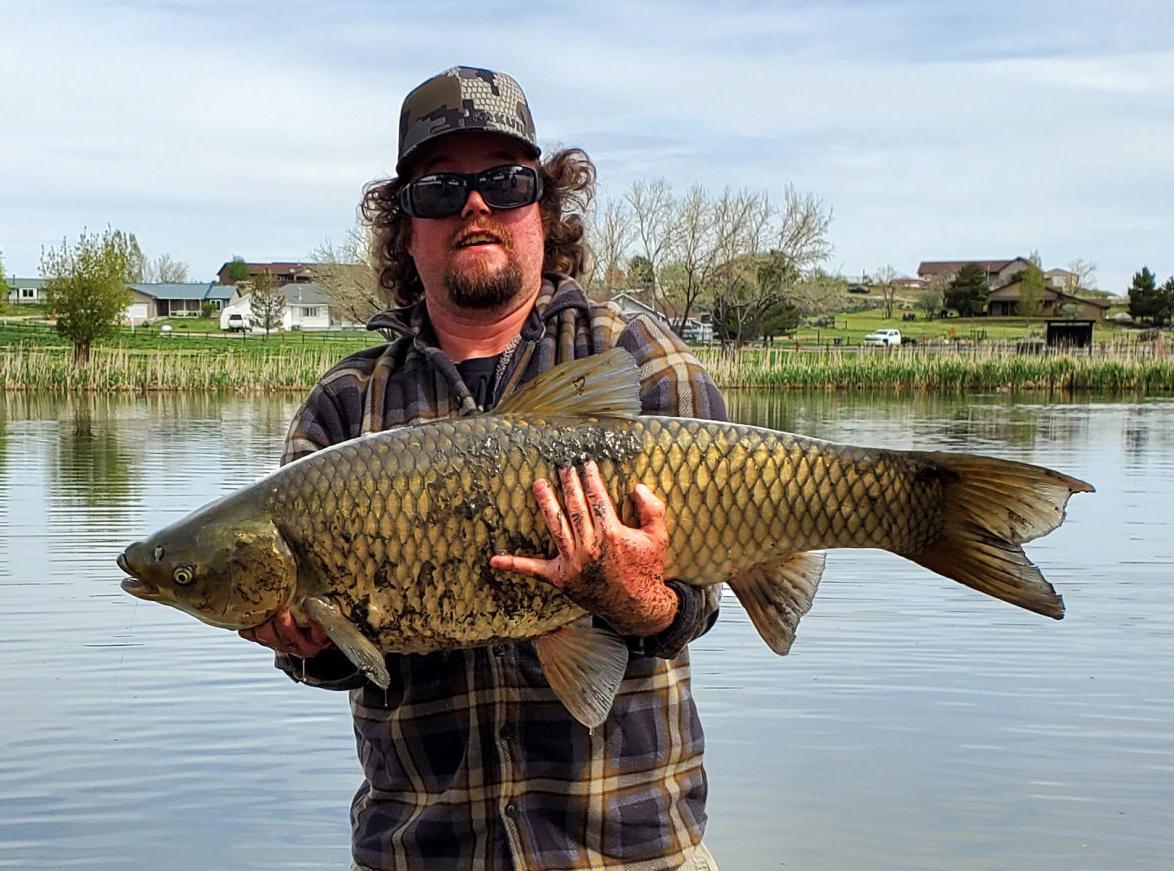 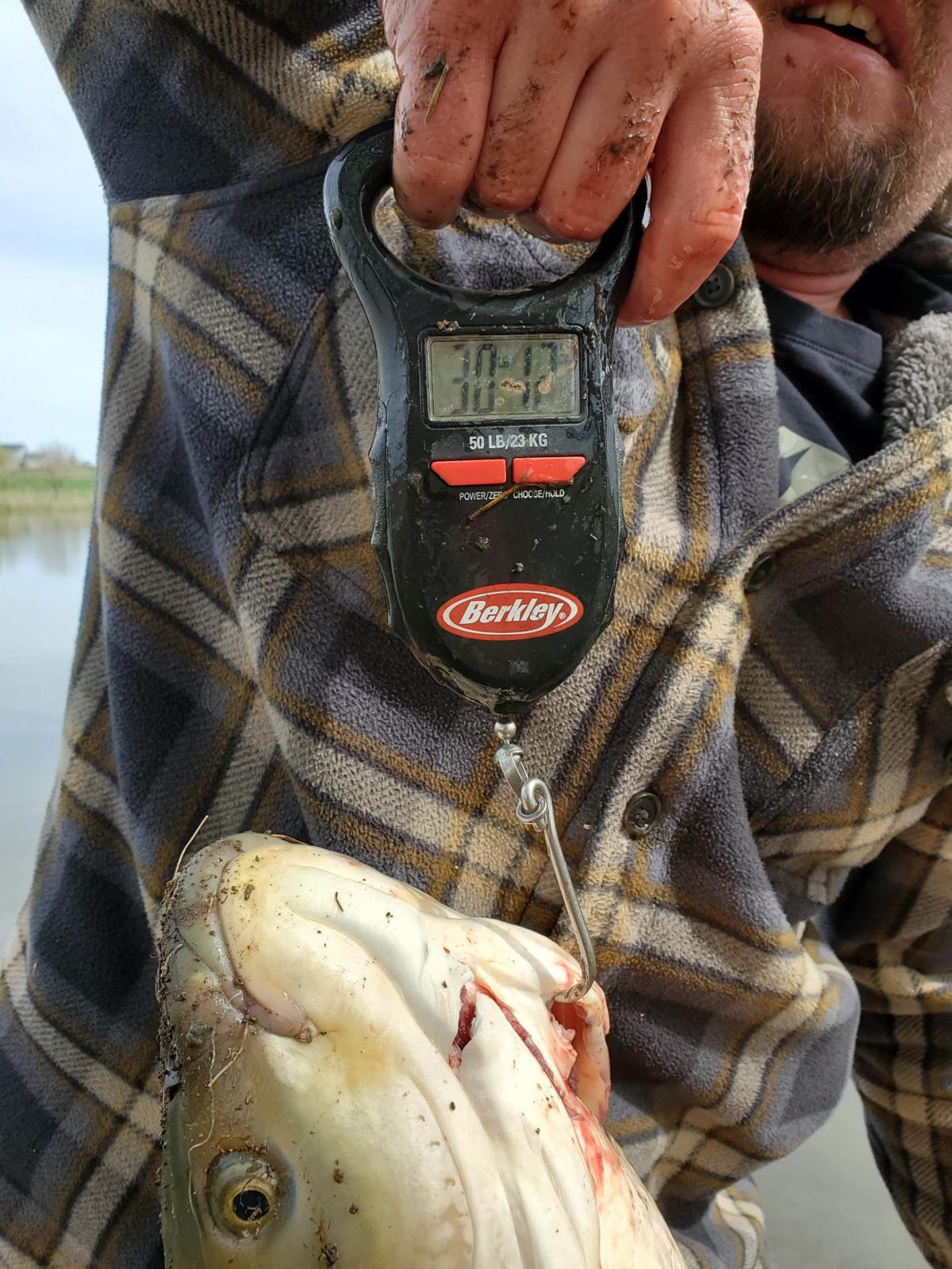 Cory Turner weighs in a big carp caught in the Spring Creek Marina. 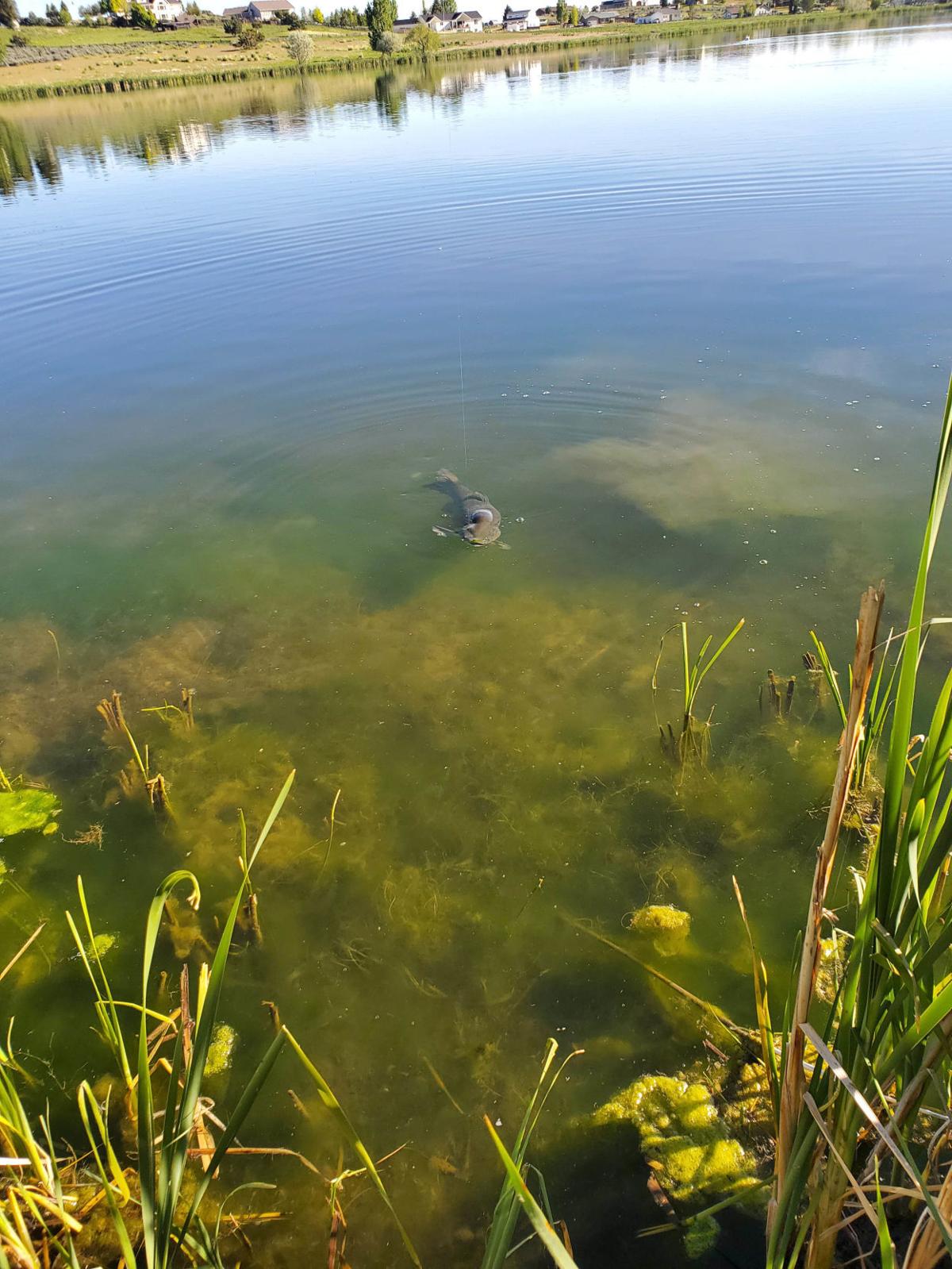 A grass carp on the line at the Spring Creek marina.

ELKO — A lot of people have seen a picture of Cory Turner holding a giant grass carp that he caught in the Spring Creek Marina a couple weeks ago, but Turner said he has caught two other grass carp in the marina that are probably bigger than the one in the photo.

The problem is that when he fishes for carp in the marina he is usually alone, and it is hard to take a selfie when you are holding a really big fish. He has taken pictures of the big fish lying in the grass, but that does not make for a very impressive photo.

Turner heads to the marina to fish early in the morning, and a couple of weeks ago when he started to reel in a big carp sometime before 7 a.m., he called up a buddy that lives right by the marina. The friend showed up a few minutes later, and Turner was still fighting the fish. When he got it reeled in, he waded into the water and held the fish in his arms for the photo.

When you get one of the big carp, trying to get it to the shore is “kind of a fiasco,” Turner said.

After getting the picture, Turner put the carp back in the water. He explained that the Spring Creek Association keeps the carp in the marina to help keep the aquatic vegetation down.

Since he has started fishing for carp in the marina he has caught about six or seven of them, and they are all big.

Turner has lived in Spring Creek for a year and half. He takes his children to the marina a lot, and he sometimes saw the carp in the water. He did some research and figured out what to use to catch the carp.

He has also caught a lot of trout and a few bass in the marina. When he is going to fish for carp, he usually goes on his own, because it can take a lot of patience to catch them.

“Those carp are pretty hard to catch,” Turner said.

When he gets a fish on the line, it usually takes about 10 minutes to reel it in.

In addition to fishing at the marina, Turner also goes fishing in a lot of other waters around the area, including South Fork, Wildhorse Reservoir, the CJ Strike Reservoir and Smith Lake.

“I’m a pretty avid fisherman,” Turner said. “Usually if I’m not at work I’m on the water somewhere.”

He is waiting to hear back from the Nevada Department of Wildlife on whether the carp he caught in the marina broke a record.

Have you wanted to try fly fishing but didn’t have the equipment or know where to start? NDOW will be holding a stream fly fishing clinic next…

Don’t you hate it when the person next to you is catching fish while everyone else isn’t? Sometimes it is location but often it has to do with…

A collection of news and features about Nevada's wild outback

Board seeks comments about shooting range and campground

SPRING CREEK – What does the future hold for the Spring Creek Association shooting range and campground?

Cory Turner weighs in a big carp caught in the Spring Creek Marina.

A grass carp on the line at the Spring Creek marina.