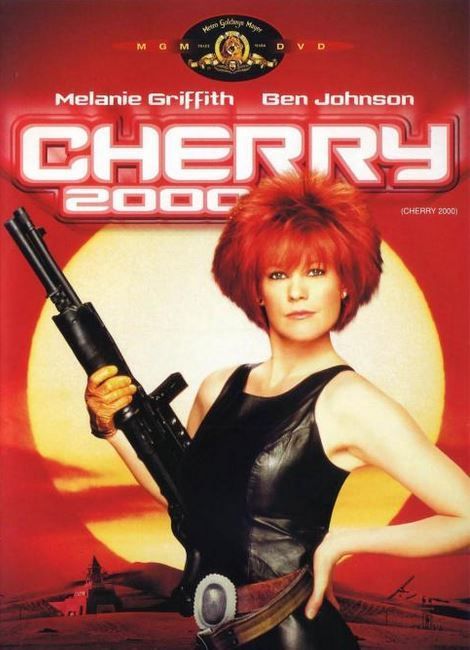 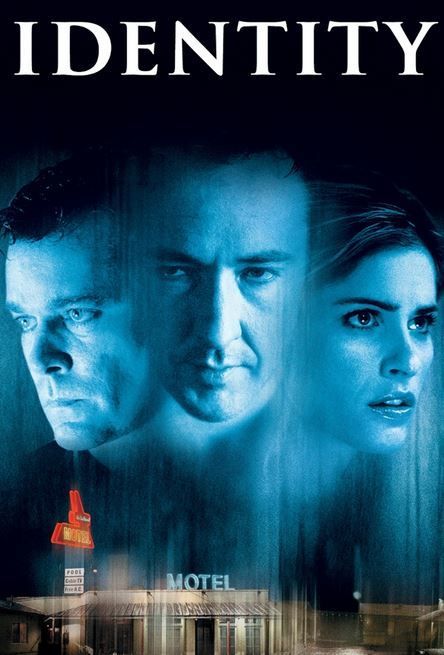 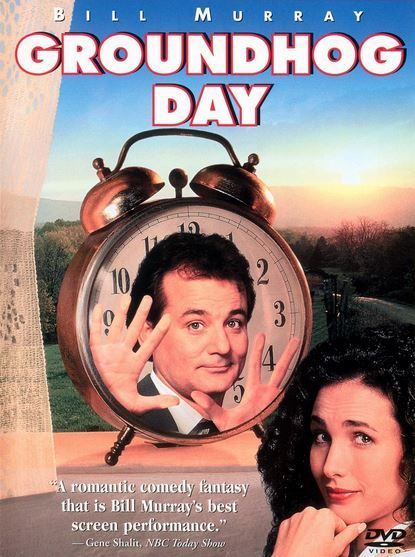 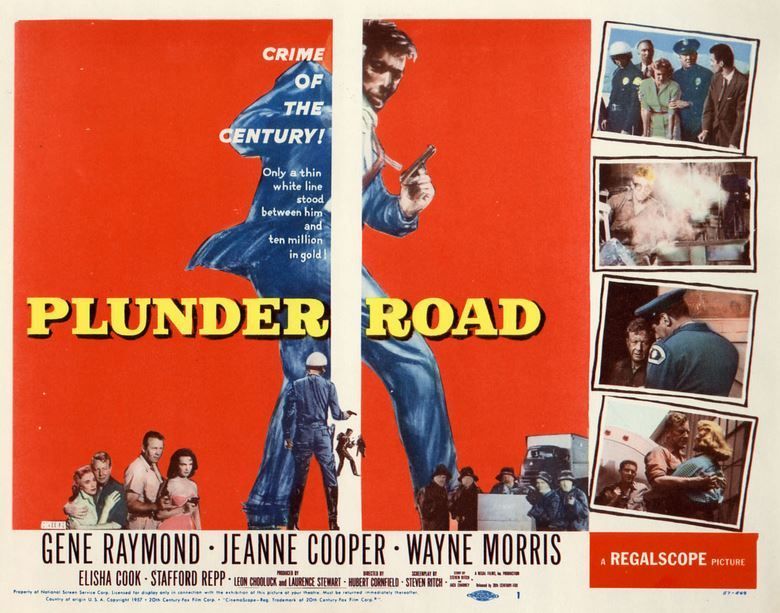 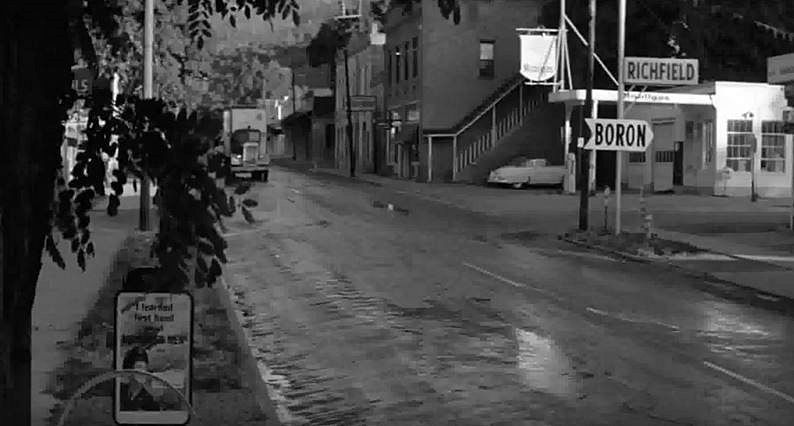 This scene from 1957's "Plunder Road" supposedly shows a truck driving through Montello. Does anyone know where it was really filmed?

Movies that mention Elko rarely describe our town accurately, and movies that were actually made here rarely show Elko in a true setting. This article will look at “Elko in the Movies,” to be followed by another article titled “The Movies in Elko.”

Probably the most successful film ever to mention Elko is the 1993 classic “Groundhog Day,” starring Bill Murray. The very first scene -- before the credits even stop rolling -- has Murray in front of a weather map saying:

“Somebody asked me today, ‘Phil, if you could be anywhere in the world, where would you like to be?’ And I said to him, probably right here (pointing to a blank blue screen) Elko, Nevada. Our nation’s high at 79 today.”

For anyone familiar with Elko it’s a distracting way to begin such an excellent film. Our town has never been anywhere near as warm as 79 degrees on Groundhog Day. February 2015 was the warmest in known history, hitting a record high of 60 degrees on Feb. 4.

Of course, 99.9 percent of the people who have seen the movie took no notice of the error. Still, it’s a pretty big goof for a Columbia Pictures production that grossed more than $70 million. The mistake was big enough to be mentioned on the Internet Movie Database website, along with a couple early-morning scenes showing daylight when it should have been dark at that time of year.

Then there’s the 1987 Orion Pictures sci-fi flop “Cherry 2000,” about a young man’s adventures as he tries to replace his Stepford-style android wife. It stars Melanie Griffith, who plays a gritty “tracker,” not the sexy title role.

About 54 minutes into the movie they introduce a geeky golfer character named Jim Skeet during a scene at the “Sky Ranch,” filmed in Valley of Fire State Park an hour northeast of Las Vegas.

“Said he was headed for Elko, but he got lost,” explains the villain Lester, played by Tim Thomerson.

But Skeet isn’t who he appears to be, and his cover unravels during further questioning that evening at the dinner table.

“I was on my way to Elko…” he says nervously, holding up a driver. “… Gonna play in the Elko Classic.”

Lester passes him a brown paper bag with a target drawn on it. Skeet is told to put it on his head. He’s chained to a wall and Lester fires an arrow into the center of the target. Everyone watching the execution cheers.

Meanwhile, Elkoans and other people familiar with our town are left scratching their heads about the “Elko Classic” reference, as if Ruby View Golf Course were on the PGA circuit.

Northeastern Nevada is also the apparent setting of Sony Pictures’ 2003 thriller “Identity,” starring John Cusack, Ray Liotta and Amanda Peet. The only way we know this is through the opening scenes showing a car driving through a rainstorm with the radio playing a weather forecast being read by none other than Elko’s own broadcast personality Lori Gilbert.

The movie starts with a motel clerk swilling booze as he watches “Wheel of Fortune.” A character played by John C. McGinley bursts through the door carrying a woman with blood on her clothes.

“Geez, what happened?” asks the clerk.

“An accident. We’ve had an accident,” he replies.

The scene cuts away to the couple back when they were still driving down the road, with the radio playing:

“… lightning is moving into Elko. Doppler radar is picking up a severe thunderstorm and dangerous lightning making its way from Pershing and Lander counties. We could get damaging winds along with flash floods. So, stay put …”

Gilbert has an unmistakable voice, which was a pleasant surprise but a bit of a distraction for Elko viewers who weren’t expecting it when they saw the movie for the first time at the Crystal Theater.

What follows is a very interesting murder mystery that was good enough to rate 7.3 stars on IMDb. It’s also a very soggy story, with more rain falling during the course of the film than our region generally gets all year long.

Most readers will be too young to remember the 1957 film noir from Regal pictures titled “Plunder Road,” but it is now available on Blu-Ray.

“On a dark night of pelting rain, five men stage a well-planned train robbery and get away with a $10 million, nine-ton gold shipment,” states the plot summary on IMDb.

Another movie about Nevada that includes a prolonged night of heavy rainfall. Doesn’t anyone in Hollywood know this is the driest state in the Union?

“Plunder Road” is one of those early heist capers that draws viewers deep into its intriguing scheme. But the movie uses footage of lush landscapes that sure don’t look like northeastern Nevada.

Dawn is breaking, and their trucks roll through a well-groomed business district, past plenty of shade trees and toward a tall church steeple.

“Now leaving the fair city of Montello,” declares the driver. “We got 35 minutes to make Wendover.”

As the movie progresses their trucks continue to drive along tree-lined streets, supposedly on a circuitous route through Baker and Alamo. The curbs along the highway are a giveaway, and one reviewer believes the scenes were really filmed in Los Angeles’ Griffith Park. Kind of disappointing, considering that the cinematographer, Ernest Haller, also filmed such classics as “Gone with the Wind” and “Rebel without a Cause.”

Oh well, Hollywood is all about make-believe. And for most film crews the real rural Nevada is too far away to scout for even the basic details. To be fair, there have been rare times when it rains all night long and you can play golf in February. Maybe the filmmakers are seeing the future and warning us of inevitable “climate change.”

Can you think of any other movies that mention Elko or towns in Elko County? If so, please comment below. If you liked this article, please send the following link to a friend: http://tinyurl.com/nj6pvk9

Coming up next: “The Movies in Elko,” films that were actually made here but still got it wrong.

Pandemic stress is here to stay

Americans spend too much time doing admin tasks they hate

Americans spend too much time doing admin tasks they hate

Ways to reduce anxiety during pregnancy

Ways to reduce anxiety during pregnancy

Editor's Web: The Movies in Elko

Movies that pretend to be set in Elko often have scenes bearing no resemblance to northeastern Nevada, as mentioned in my article titled “Elko…

Editor's Web: The legend of Thunderbird and Coyote

How has President Donald J. Trump survived more than a year in office despite having no political experience and being relentlessly attacked a…

By this point in the 21st century I had hoped there would be robots to do all of the work for us humans. Mine would be an android named “Frank…

Nevada’s senators have their eyes on the future, and it is quickly becoming the present.

This scene from 1957's "Plunder Road" supposedly shows a truck driving through Montello. Does anyone know where it was really filmed?