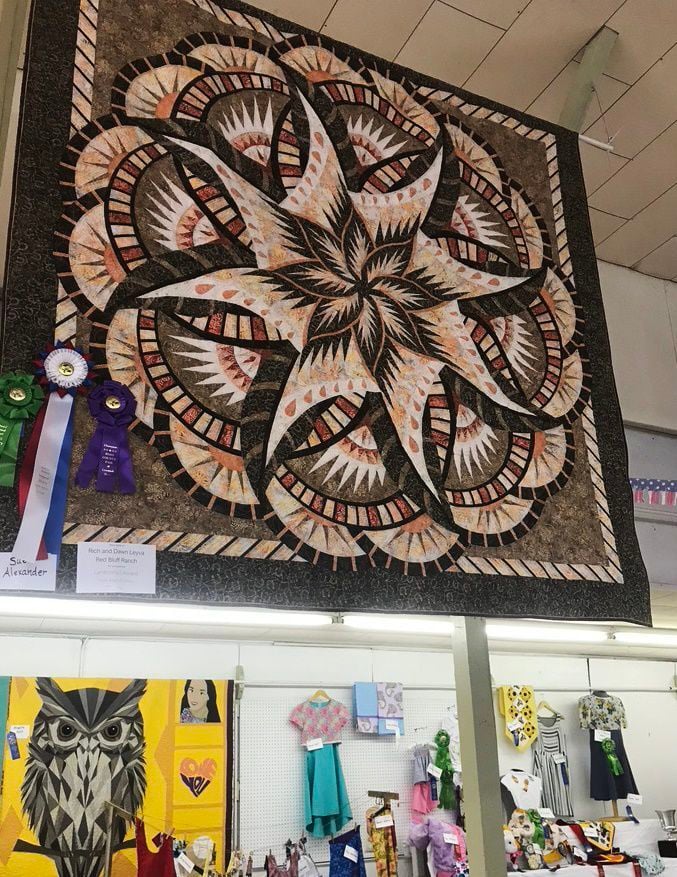 This award-winning quilt was stitched by Sue Alexander.

This sunflower grown by Avi and River Minter extended above the high windows of the Exhibit Building, the original building for the fair.

ELKO — Over the Labor Day weekend Elko Fair fans enjoyed all that the Elko County Fair has offered in the 100 years of its existence. The Fair has become a traditional event for family, friends and out of town folks, to meet.

The Elko County Fair began in 1920, and has continued yearly, except for three years. One year the Fair was cancelled because of hoof and mouth disease; the second year it was canceled there was not enough funding; and last year, 2020, the fair was canceled due to the Covid-19 pandemic.

The 2021 Fair began with the traditional parade at 11 a.m. Friday on Idaho Street. At 1 p.m. the activities at the fairgrounds opened with something for everyone; Horse Races, Stock Horse Competition, and Home Art exhibits for all ages that included sewing, quilting, hobbies & crafts, photography, flowers and garden produce.

The traditional 4-H animals raised by youths between 9 and 18 years old that compete in breeding stock and fat animal competition was organized by the Fair Board this year instead of the UNR Extension service. The animals, beef, sheep, poultry, and goats were judged on Saturday, and the market animals sold at auction on Sunday.

Attendance at the Fair was high, and most fairgoers commented on this fact based on the crowd numbers and hard-to-find parking.

Kim Johnson, in charge of selling tickets for the races and the arena events, said that over the four Fair days 8,407 tickets were sold, with the highest number of 3,703 on Saturday. In addition, there were many people that did not buy tickets but enjoyed the Home Arts and Flower/Produce exhibits as well as seeing the Youth Animals in the barns or in the show ring.

What began with the Fair Parade on Friday ended on Monday as the final horse race of the Fair. That race is named the Nevada Blackjack Challenge. The Blackjack Challenge has eight syndicates participating, each with several members. This year the winning horse was Dewey, running under the colors of Unable Stables. The colors associated with Unstable Stables will be painted on the horse picture that is above the Welcome Fair arch.

Giovanna Puccinelli of the Fair Board Racing Committee said that the pari-mutuel betting over the six days of horse racing was $235,145. That amount is down a little from the betting in 2019.

The 63rd Wells Businessmen’s Race was run on Monday, Sept. 6, this year with only two horses running after three were scratched. The winner of the 350-yard race was Freyght Boss. The Wells businesses have been sponsoring a race on Wells Day at the Fair since 1957.

How to exercise safely outdoors as the seasons change

How to exercise safely outdoors as the seasons change

Speaking of Science: Should we worry about long-term side effects from the Covid-19 vaccines?

Today most Dat-So-la-La-Lee baskets are in museums and are considered priceless.

Meet the birds and flowers of Alaska

ELKO -- Lois Ports of Bristlecone Audubon will give a presentation on a recent trip to Nome, Alaska, at 7 p.m. Friday.

This PowerPoint talk will feature photos of the scenery, wildlife, birds and flowers that she and her husband Mark saw on the trip. It will include range maps for the birds that were seen, and she will discuss how many of these birds that breed in the far northern tundra of Alaska migrate through our area in the spring, fall or both.

Ports will also include interesting facts from their life histories. "We hope you can join us virtually for this presentation," she said.

Due to the high positivity rate for Covid-19 in our area the officers and board members for Bristlecone Audubon have decided that it is best to hold virtual meetings for at least the next few months.

The group will be using Zoom as its platform. If you would like to be sent a link for this program, email bristleconeaudubon@gmail.com before Thursday.

ELKO — Riverton and The Star Hotel are presenting the Riverton Home Town Hero Award during the football season.

Ask the Builder: Roofing 101: Tips for an expert installation

I have no clue how many new roofs are installed in the USA each year, but it’s got to be in the hundreds of thousands. Perhaps a new roof is in your future or in the next few years. If so, you’d be wise to read up on the topic at AsktheBuilder.com before it’s time for you to meet with a roofer.

On the Edge of Common Sense: The Producer Meeting

When you take a seat in the waiting room of a veterinary clinic, a feedlot office or an animal health store, you occasionally notice a body si…

Pasta e fagioli is easy to make. This recipe scales down the work even more by recommending you use canned beans.

How to avoid paint color mistakes in your home

Thinking about painting your home? Make sure you choose your colors carefully.

This award-winning quilt was stitched by Sue Alexander.

This sunflower grown by Avi and River Minter extended above the high windows of the Exhibit Building, the original building for the fair.