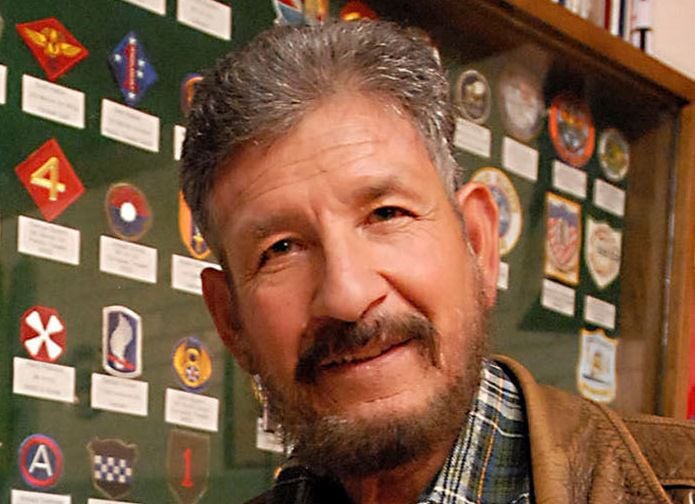 “I knew I wanted to do something for my country,” said Gil Hernandez of his thoughts when he enlisted in the Marines to serve in Vietnam. For more than four decades, Hernandez has served veterans at the local, state and national levels while simultaneously participating in community and civic affairs.

Gilbert Hernandez grew up in Montello and graduated Wells High School before enlisting in the Marines to serve a four-year tour of Vietnam in 1967. He was shipped to Okinawa, Japan for boot camp and special training before arriving in Vietnam.

Four months into his tour, Hernandez was sent on patrol in the demilitarized zone at Khe Sanh when his truck was hit by enemy fire. Brought to Dong Ha for treatment, he was pronounced dead three times and twice sent back from Graves Registration by morgue attendant Charles Roth to triage, before doctors began working to save Hernandez’ life. The two men were reunited at the Vietnam War Memorial in Washington, D.C., 42 years after the experience.

It took Hernandez a year to recuperate from his multiple injuries. He married Debbie Blackett and moved to Elko where he attended Northern Nevada Community College and earned an Associates of Applied Science Degree in corrections in 1973, and served as vice president of the Elko Jaycees.

To both help veterans and as a method to battle his own post-traumatic stress syndrome, Hernandez joined the Gaspar J. Salaz VFW Post 2350 and Disabled American Veterans.

“It’s my life. It keeps me sane,” Hernandez said in 2012 of his decades-long involvement in the VFW.

Gil began advocating for veterans’ benefits and speaking out on issues that impact veteran servicemen and women, notably funding for the Department of Veterans Affairs and services and support for veterans suffering from PTSD.

In addition to his service to veterans, Hernandez served as chairman of the Elko Convention and Visitors Authority board for four years and is a member of Elko Bighorns Unlimited and a founder of the Rocky Mountain Elk Foundation. Recently, he participated in a food drive for homeless vets.

Over the years, Hernandez has been recognized for his work including Veteran of the Month, All-American State Commander of the VFW, and was chosen to lead the Nevada VFW in 2007. He was honored with Great Basin College’s Distinguished Alumni Award in 2015.

Hernandez once said of his life after Vietnam and the opportunities to lead the VFW in several capacities, “Maybe that’s why I was given another chance – to lead this organization.”

ELKO 100: The full collection of 100 figures from the city's first century

How to prepare your home for cooler weather

On the Edge of Common Sense: Deer Hunting Cow Lick

I’ve got a mule deer hangin’ on my wall from northern New Mexico so I could relate to Rafael’s story.

How to protect yourself against adult bullies

Donation do's and don'ts — plus busting some Goodwill myths

Anything you donate needs to be reusable. Here are some more donation tips and some common misconceptions about Goodwill.

The chemical is in food storage containers, shampoo, makeup, perfume and children's toys. Here are tips to reduce your exposure.

What experts say about the best time to exercise

For everyone who hates setting their alarm an hour earlier to hit the gym, scientists may have some good news.

Kary Osmond: This pasta recipe needs only a few ingredients and is easy to master

If you’re looking for a pasta dish that’s comforting and easy to make, look no further.