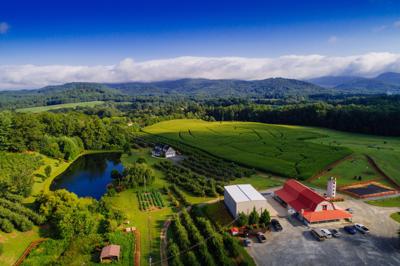 When Eve risked plucking that first apple, it didn't turn out so well. But when farmers in Henderson County, N.C., risked their livelihood on apples, they created a veritable Eden.

It was a calculated risk, based on intimate knowledge of the land developed over generations of working family farms. With its mountainous terrain, warm days and cool nights, the western side of North Carolina is ideal for growing apples. The climate provides just the right amount of chilling. Topography works in the farmers' favor, too. When cold air sinks into gullies at the bottom of hills, it protects the fruit trees above from frost. Combine that with good soil and you get consistently good flavor and production. This sparked an interest in resurrecting a craft beverage industry that harkens back to America's colonial era.

Appalachian farmers intuitively understood the value of apples in the 1800s when trees planted by settler William Mills flourished. Like the original Eden, things went well for a while. In the 1990s, however, North Carolina's apple industry fell from grace when commercial juice companies outsourced to China.

"Seventy-five percent of the processing market disappeared," says farmer Kenny Barnwell, who saw his agrarian way of life flash before his eyes. "Except for college, I've always lived within 100 yards of an orchard."

Farmers found an angel in agritourism. When the commercial market dwindled, many opened roadside stands.

"Families want to make memories and Henderson County is well-suited for that," Carden says.

That's evident on the Crest of the Blue Ridge Orchard Trail, where families frolic among 20 orchards offering U-pick produce, farm stands, hayrides, corn mazes and the chance to fire an apple "cannon."

Henderson County, about 20 miles south of the tourist hot spot of Asheville, accounts for 85% of the apple harvest in North Carolina, the seventh largest apple-producing state in the U.S. Nearly 300,000 people attended this year's Apple Festival over Labor Day weekend.

"Some farmers make their entire year on festival sales," Barnwell says. "Agritourism has been a godsend."

It's a sentiment shared by Mike Stepp, who's often found atop a John Deere tractor pulling wagonloads of visitors through acres of apples, pumpkins and sunflowers at Stepp's Hillcrest Orchard in Hendersonville. Three generations of Stepps work the farm their family has owned for 70 years.

"There's a real love for growing apples here and keeping that tradition alive," he says. "It would be difficult to make it without agritourism."

A closer look at apple country 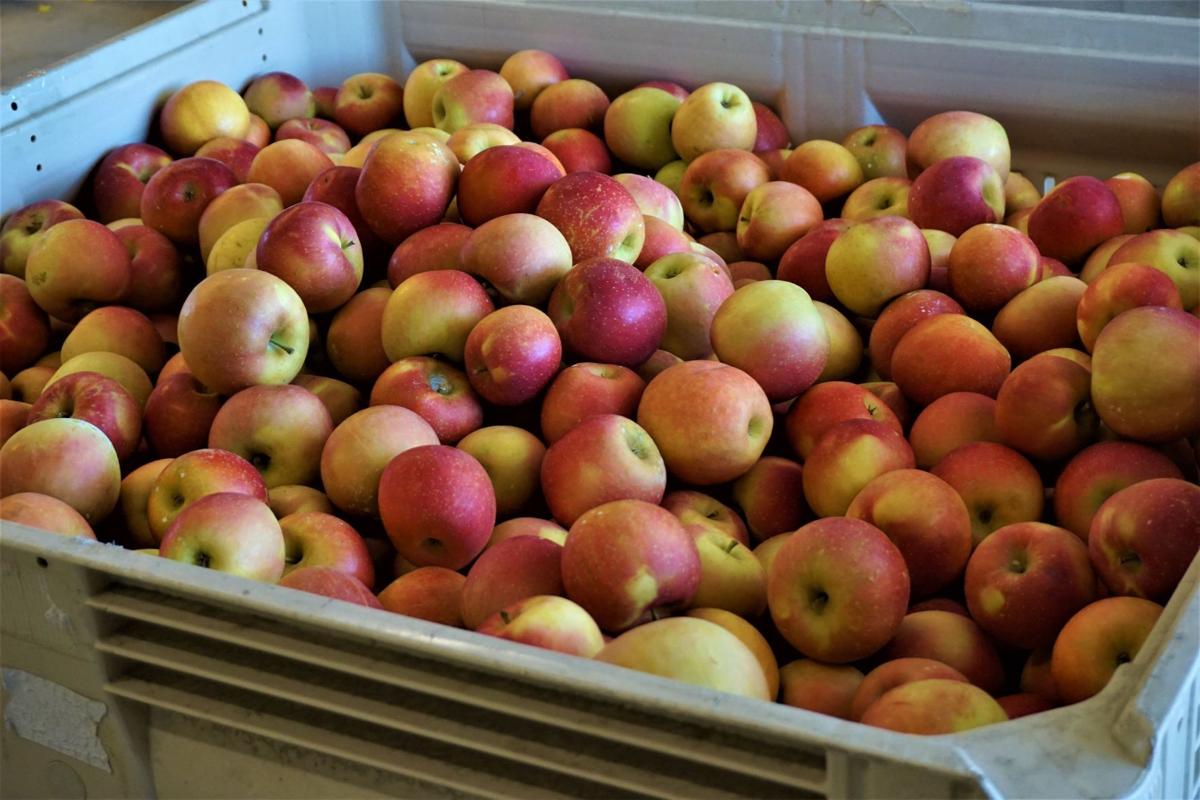 Stepp's Hillcrest Orchard in Hendersonville has been letting visitors pick their own apples for more than half a century. (Nancy Moreland/Chicago Tribune/TNS) 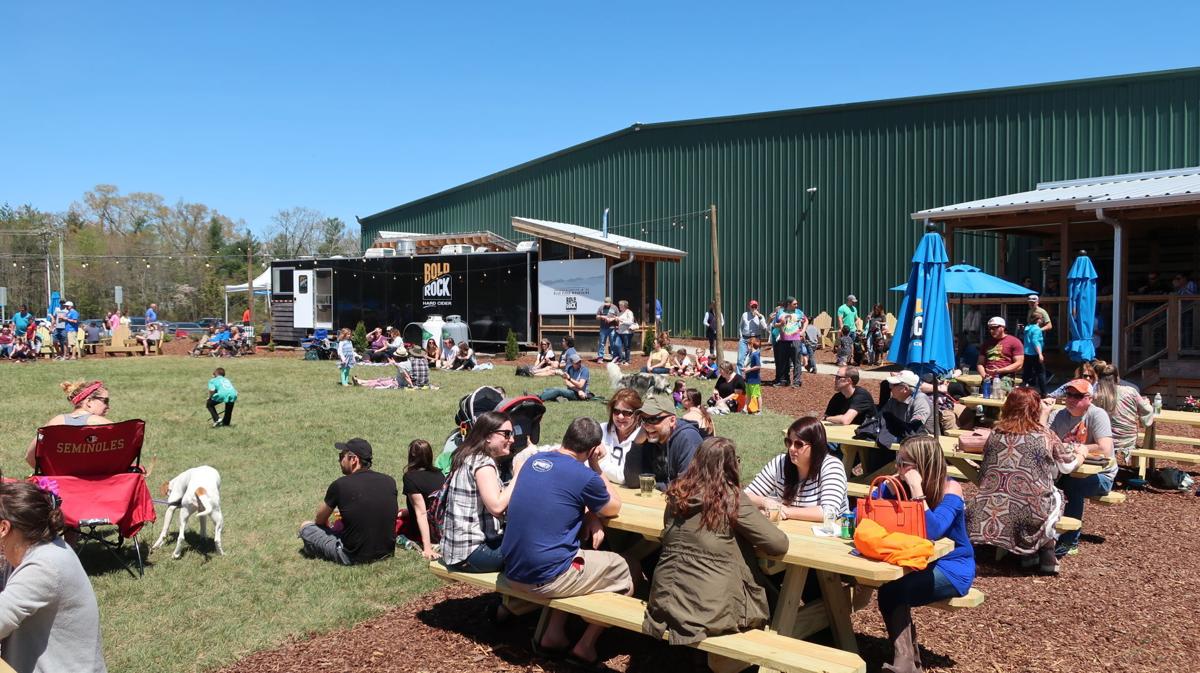 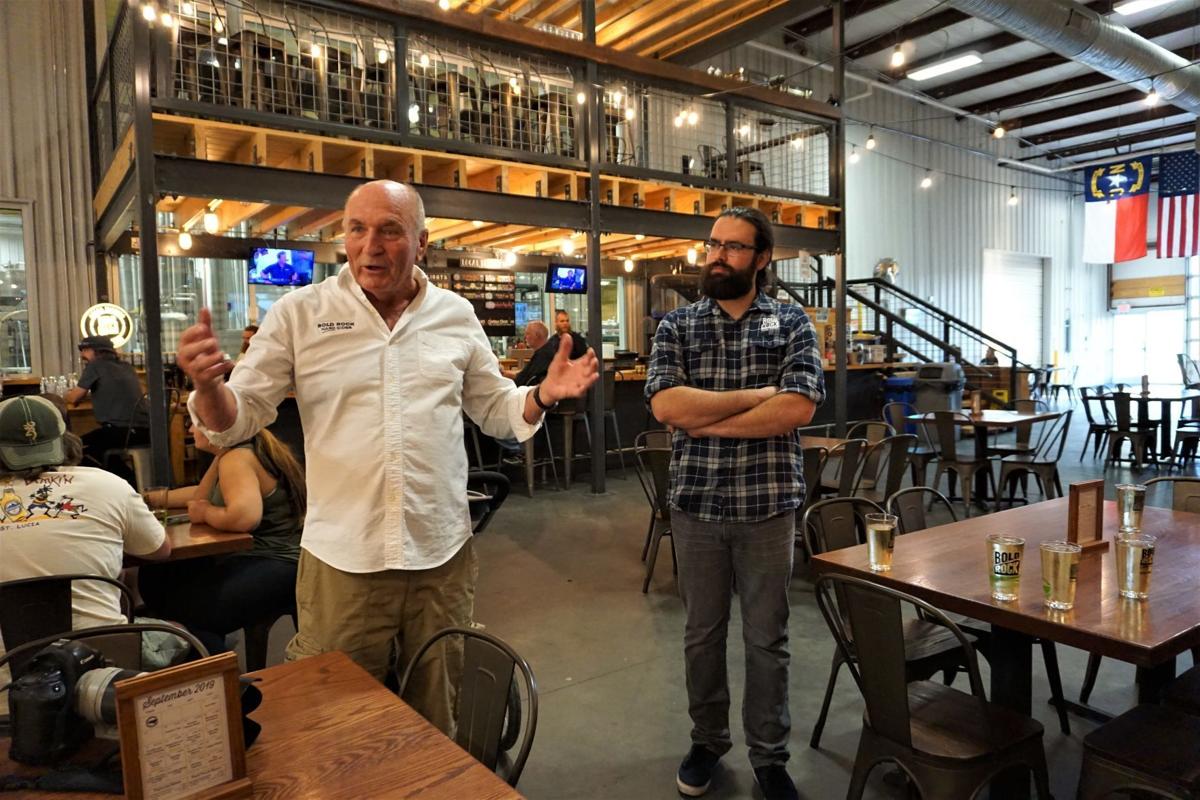 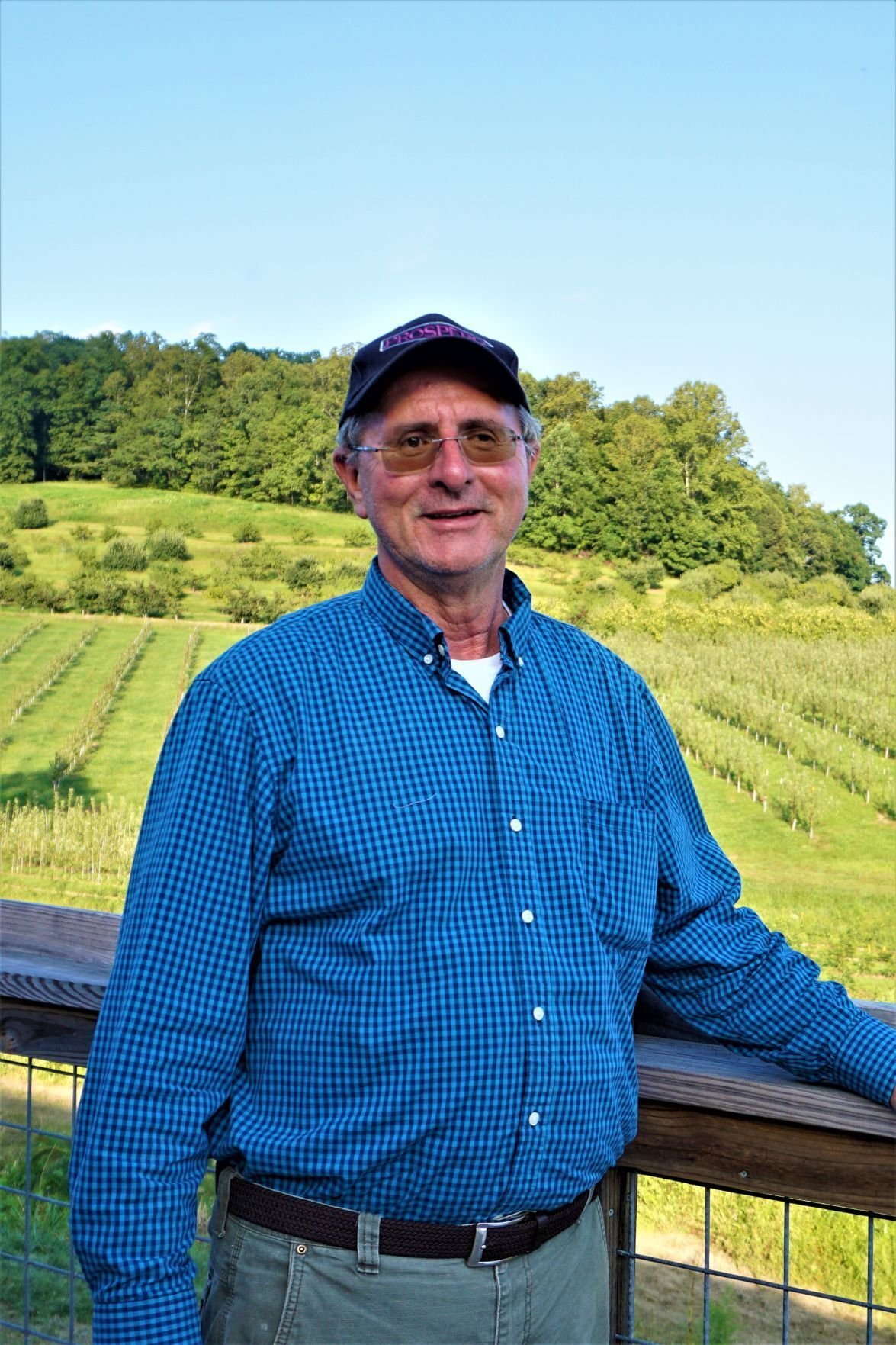 On the south end of the Henderson County, Alan Ward works 100 acres of land owned by his family for nine generations. He opened Saint Paul Mountain Vineyards in 2007. Appalachian Ridge Artisan Hard Cider followed in 2018 as the county's only orchard-based cidery. (Nancy Moreland/Chicago Tribune/TNS) 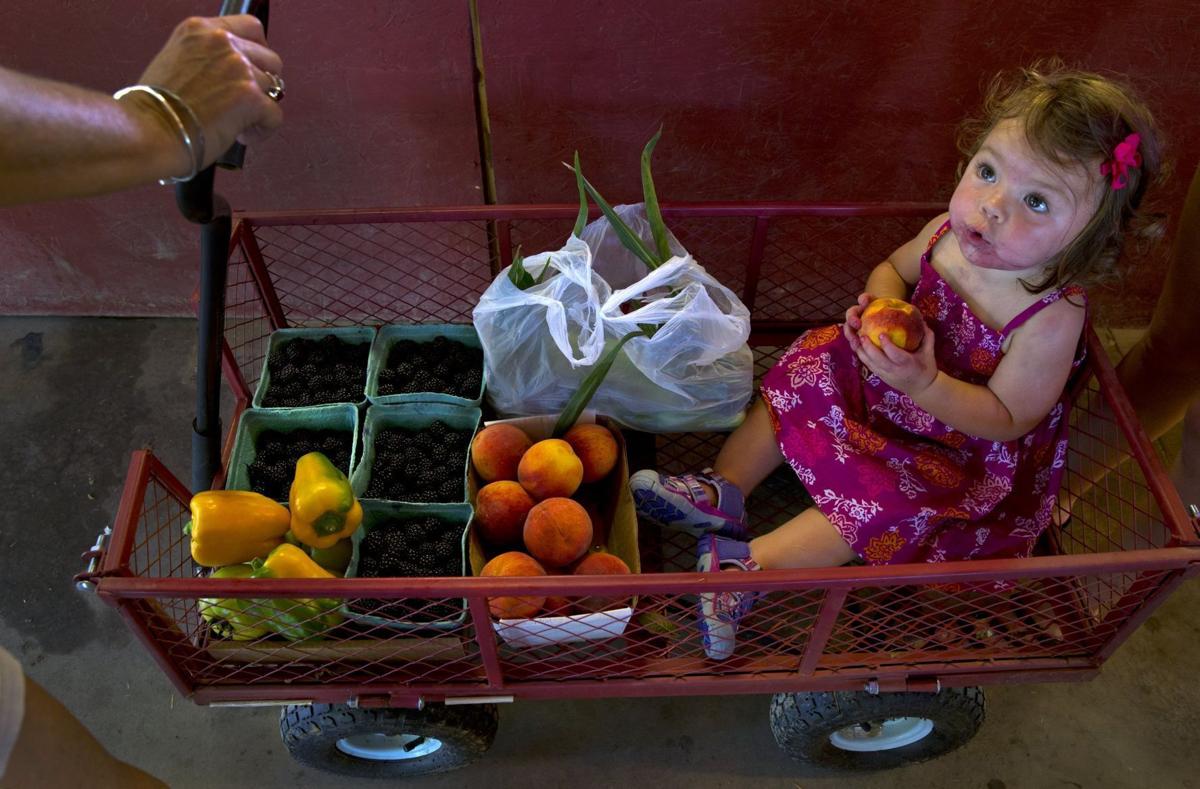 The blackberry smeared face of Hazel Walters, 19 months, looks to her grandmother Sally Walters of Ladue, as she pays for U-pick-fruit at Braeutigam Orchards in Belleville on Friday, July 28, 2017. The family spent the morning picking peaches, blueberries and peppers at the sixth-generation farm just off Hwy 15 east of Green Mount Road. Photo by Robert Cohen, rcohen@post-dispatch.com

As agritourism blossomed, another industry bubbled to the surface. Asheville's pristine watershed launched a booming microbrewery destination. Why couldn't Henderson County tap its terrain to develop a hard cider market?

Having grown apples on three continents, Brian Shanks, one of the world's top cider developers, knew it could be done.

"This pocket of North Carolina produces some of the best apples in the world," Shanks says.

Shanks helped Bold Rock Hard Cider become one of the largest hard cider producers in the U.S. When the company outgrew its Virginia facility, Shanks and co-founder John Washburn set their sights south.

Today, the company produces 10 year-round and four seasonal craft ciders from apples sourced within 35 miles of its Mills River, N.C., facility. From an upstairs dining deck overlooking the production room, patrons watch the pressing, fermenting, clarification, blending, chilling and canning process. Others tour the production room as Shanks or other staff explain how things work.

"Knowing you have a home for your apples makes a lot of difference to a farmer," he says.

The flavor profiles of local ciders vary, from dry and sparkling to pleasingly tart to full-bodied and fruity, but without cloying sweetness.

"Hard cider is gaining ground as a refreshing alternative to beer," Shanks says. "It's pleasant and approachable, with a low alcohol content suitable for drinking over a long afternoon."

Ward leaves apple cannons and fried pies to others, focusing instead on techniques learned from traditional cider makers in Normandy, France. With a purist's passion, he imported and planted more than 5,000 French heirloom apple trees, installed a French distiller and ages his product in French oak barrels. His six ciders range from crisp, clean and effervescent to a sweeter, tannin-rich flavor.

"Apples grown at 2,300 feet elevation taste different than those grown at 4,000 feet," he explains. "The soil and climate at different elevations affect flavor."

The county's recent recognition as a federally designated American Viticultural Area boosts the reputation of local vintners and makers of hard cider, which, like wine, is made of fermented fruit juice.

Embracing the French penchant for patina, Ward spent months converting a 1920s era barn into a tasting room and recently transformed an 1850s farmhouse into lodging where guests sleep within sight of the orchards. By next spring, a viewing area will allow visitors to watch cider being made the French way.

Following Ward on a farm tour, you might envision yourself in northwestern France. (Tours are held weekends during apple season; by appointment at other times.) Scanning the Blue Ridge Mountains, he reflects on what makes this area unique.

"Western North Carolina is home to one of the oldest mountain ranges in the world," he says. "It's an extremely biodiverse region."

If scenic vistas and favorable growing conditions launched the county's agritourism movement, the community is what's kept it going.

"You have an idea and the people around here help make it happen," says Shanks.

Like the streams running through these mountains, a collaborative spirit runs through the farms and towns tucked among ridges, peaks and valleys. Working together to preserve farming traditions, people of all ages and backgrounds made Henderson County a paradise in its own right.

The Waverly Inn and The Charleston Inn carry on Hendersonville's tradition of hospitality. Former boarding houses renovated into comfortable bed and breakfast lodging, both are walking distance to downtown. Waverly rates range from $129-$500 a night; Charleston, $149-$209.

Every year in late April, cider and wine makers celebrate apple blossom season with tastings, dinners and music at the Cider, Wine and Dine Weekend.

Sign up for our weekly updates and explore our in-depth coverage, from field to plate.

Here is intro copy talking about a week of content at some place, somewhere, eating some stuff. We'd want about 125 characters.

'Tis the season for picking out the perfect Christmas tree and creating lasting memories while you're at it.

Bringing one of Maryville's 'best-kept secrets' into view

With attention focused on unprecedented growth in the fastest-growing community in Madison County, one Maryville trustee has his eye on the past.

Wine-lovers' risotto: the perfect hot dish on a cold night

This creamy wine-absorbed rice with prosciutto​ is the perfect hot dish to warm you on cold winter's night.

This decadent dish is an easy make-ahead dish that is equally delicious served at home on your breakfast table or served as a rustic dessert.