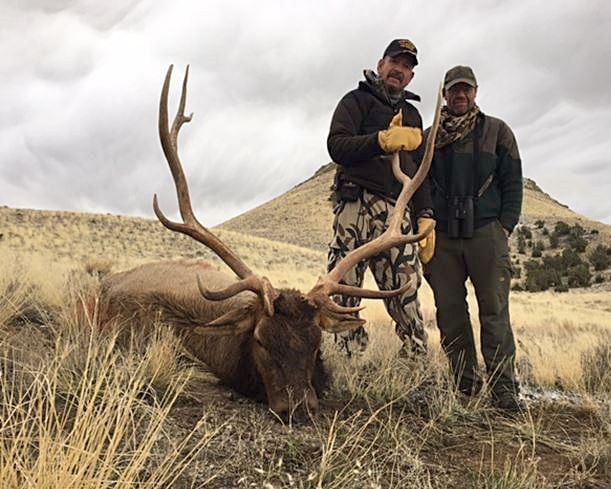 Gil Hernandez, left, with the elk he bagged during a Wounded Hero hunt sponsored by the Nevada Outfitters and Guides Association.

He received a free, once in a lifetime hunt, which included an elk tag, hunting equipment, lodging and guide service.

Gilbert Hernandez, is a Vietnam veteran, from Elko. Upon graduating from Wells High School he joined the Marines in 1967. He attended boot camp in San Diego, California, and was deployed in January of 1968. He was assigned upon arrival in Vietnam as a rifleman of the 2nd Battalion 3rd Marine Division, Golf Company.

When Hernandez was first contacted in early spring, about the Wounded Hero program, he remembered thinking, “I really need to suggest a veteran for that project.”

However when he finally talked to Mitch Buzzetti, the guide in charge, he figured out he was the recipient.

“I was surprised I was selected for the Wounded Hero elk hunt. I am very humbled and really appreciate it.”

Optics manufacturer Leupold Stevens and the Winecup Gamble Ranch, along with NOGA are the major sponsors. Leupold donated a rifle scope, and a range finder. The Winecup Gamble Ranch could have sold their land owner tag for thousands of dollars, instead they chose to donate to one of our wounded heroes. In addition, to the tag, they donated six days of lodging for the entire crew in their 5-star plus equivalent lodge, and provided Chef Melody Surdahl.

Ranch manager James Rogers said, “We have been excited about this and have been looking forward to this for several months.”

Gil held back the tears and said,” I have been like a little kid waiting to open a Christmas present, waiting for this hunt.”

The list of contributors is extensive and public support is massive. The Elko County Commission issued a supportive proclamation, many commissioners contributed individually, and Commissioners Rex Steninger and (wife)Dorothy, Cliff Eklund and (wife) Barbara, attended the first evening’s gathering meeting. Hernandez was presented with a Remington 7mm mag rifle donated by Elko Federal Credit Union and Gun World & Archery. The 7mm was mounted with a Leupold scope, which Gunwerks had accurized.

Hernandez shared his story during the first evening at the Winecup. It all began on the night of April 25, 1968, in the middle of combat, his tank, which he and several Marines were riding on top of, was hit by satchel charges and grenades. Hernandez was critically wounded in the back, both legs, his liver, and his arm. He received a punctured lung, had six feet of his small intestines removed and pulled shrapnel from his skin for years following the attack.

His story of survival is even more miraculous as he was pronounced dead following the attack. His body was taken to an area called Graves Registration, where fallen soldiers are ultimately taken and prepared to be sent home. The soldiers are first fingerprinted and then put in a body bag. It was then that a gentleman named Charles “Graves” Roth saw a twitch from the body of Hernandez who was to be fingerprinted next.

Roth immediately sent him to surgery, where the Doctor pronounced him dead. When he arrived back again at Graves Registration, Roth began hollering “this Marine is alive.” For a second time he sent him back to a surgeon, where they pronounced him dead again. Finally, for fear of the Marines, they continued to work on him and finally found a faint pulse.

For three days we left the lodge early ready to glass every day before daylight, but the weather didn’t cooperate, as rain turned to snow and the fog settled in over the Great Basin for long periods. We saw a few elk here and there but because they either spooked, or we were running out of daylight, or I wasn’t able to shoot, left us without an elk. We put in some long days but were fed well and the accommodations were awesome.

It wasn’t until the fourth day that we got into some cows and bulls, however some deer spooked them right away and we had to wait for them to bed down again. Buzzetti could see there were three nice bulls in the herd, so we waited and waited. While we were waiting a storm rolled in and it was blizzard like conditions. It made it difficult to see the elk and Hernandez’s trigger finger was closing up from the cold. Once they bedded down they moved in closer. Buzzetti used the range finder donated by Leupold to figure the distance.

“They are 415 yards out,” Buzzetti told Hernandez. “Shoot the biggest of the three bulls.”

Hernandez was very cold but had his gun resting on Buzzetti’s pack on a rock. When Hernandez got the bull he wanted in his sights, he squeezed the trigger and the first shot hit the elk. He fired two more shots all hitting him. However the elk was still moving a little, so they snuck up closer and shot again at 100 yards, which was fatal.

“I was really glad to get out of the cold, even though I was layered in the Sitka clothing, which had been donated. I was also so glad I was able to shoot the bull and I was really glad Mitch was there,” Gil said.

The meat cutting was donated by Northern Nevada SCI Chapter and Hernandez’s elk will be mounted by North Slope Taxidermy.

“I am honored to be able to take him out and make it a once in a lifetime hunt. We are proud to be able to support a life-long dream of his,” Buzzetti said.

Donations toward future Wounded Hero Elk Hunts can be sent to: Nevada Outfitters and Guides Association, and mailed to: P.O. Box 28-1251, Lamoille, NV 89828.

How to prepare your home for cooler weather

Gil Hernandez, left, with the elk he bagged during a Wounded Hero hunt sponsored by the Nevada Outfitters and Guides Association.