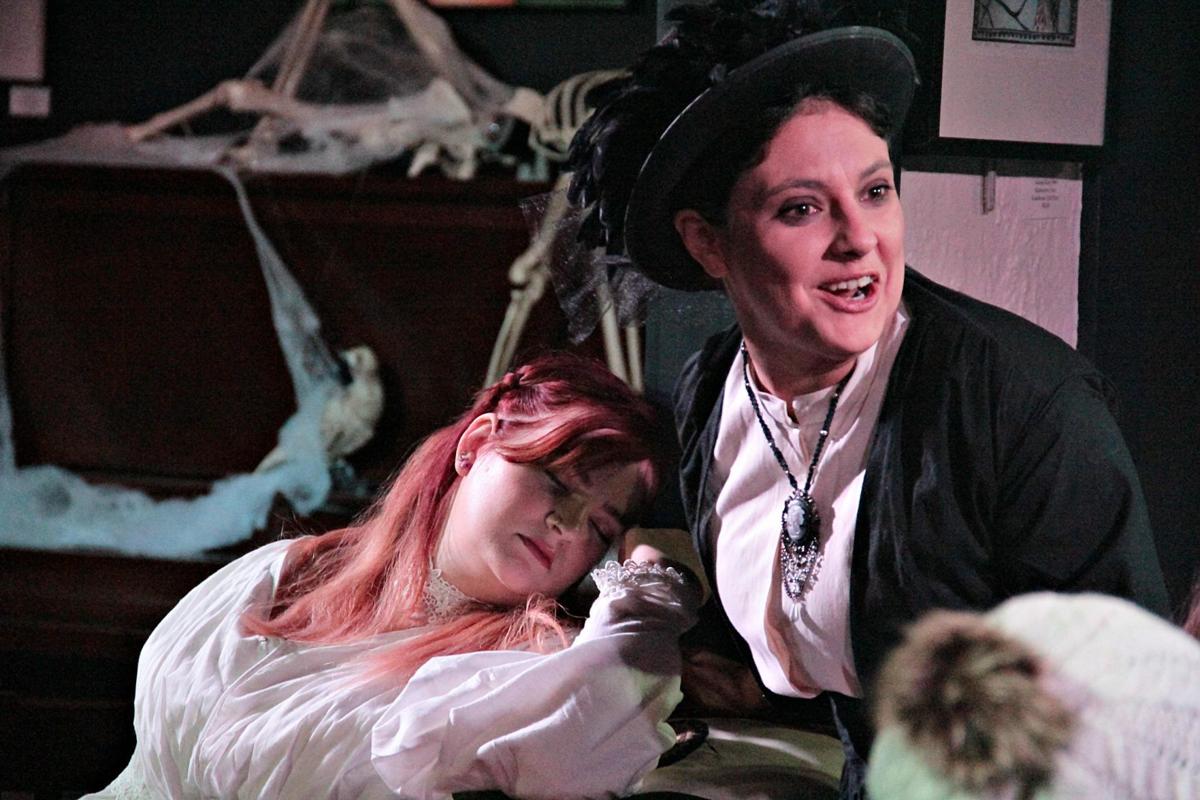 Lane Elizabeth as the narrator in Edgar Allan Poe’s “Lenore” turns to the audience following the death of Lenore, played by Kodi Goddard, during a dress rehearsal of “Poe & Pints” at Duncan LittleCreek Gallery. 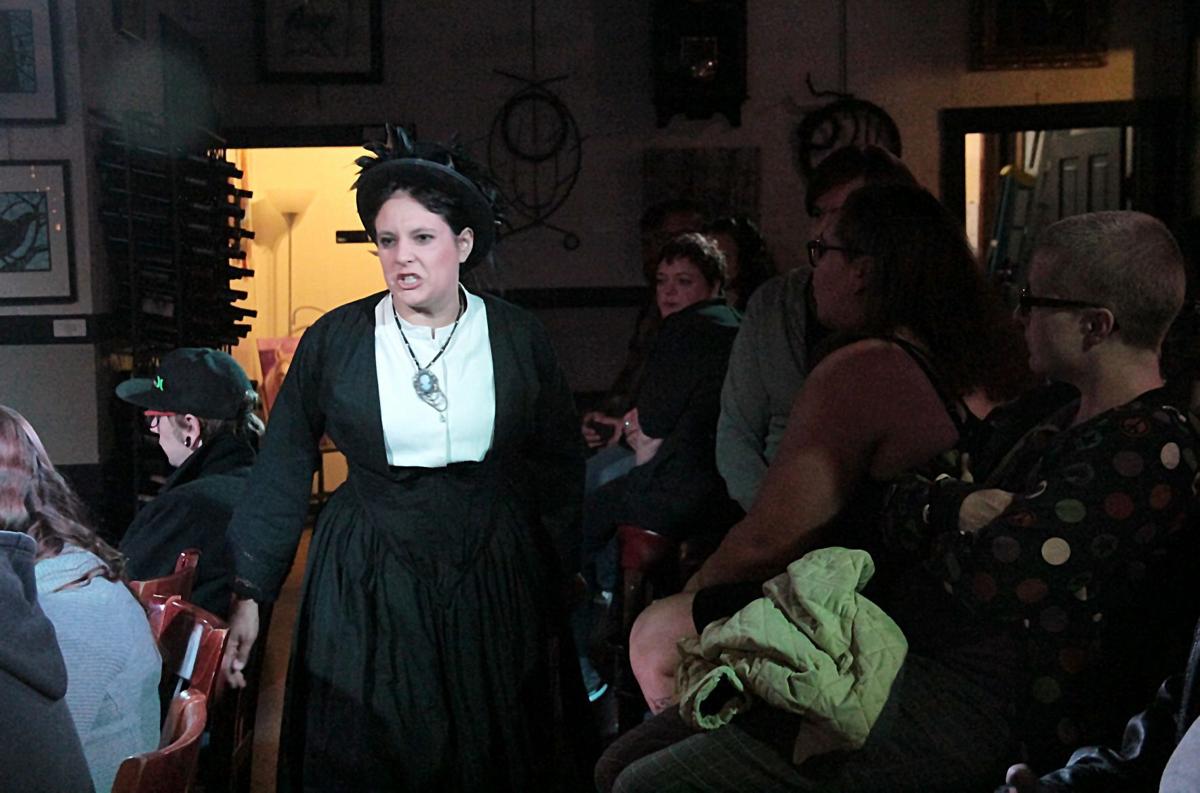 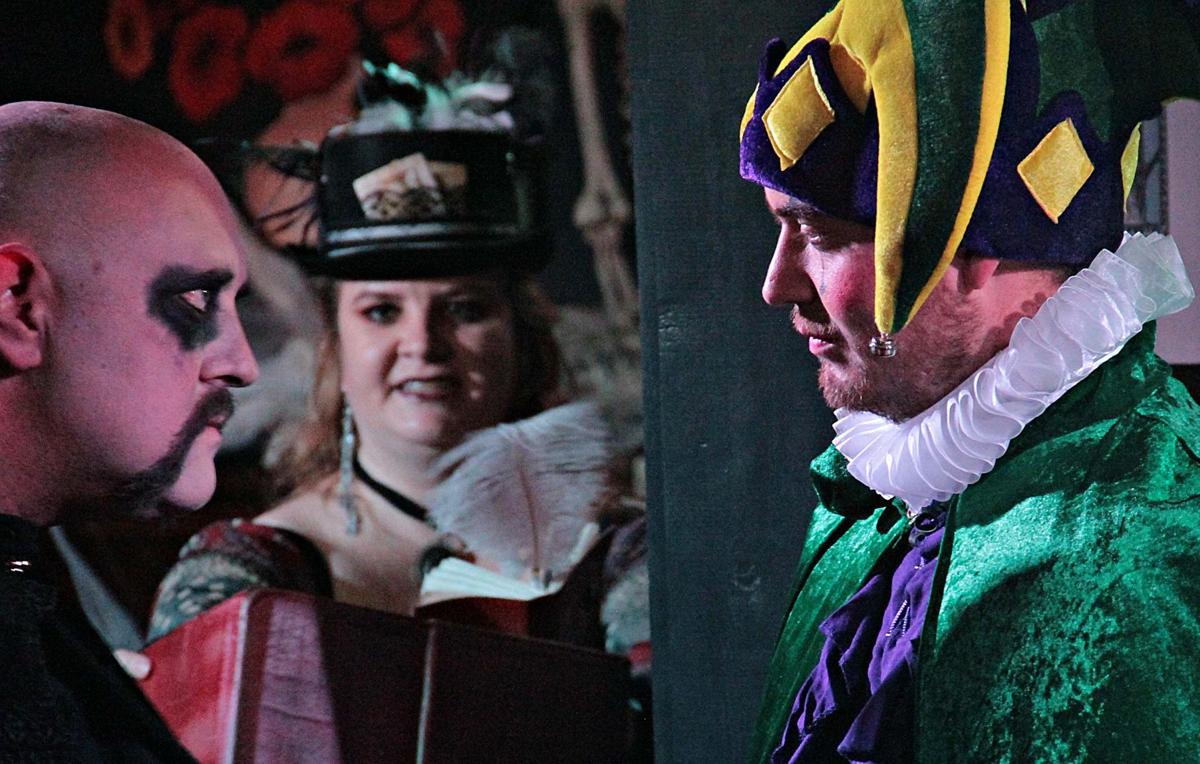 D.J. McCoy, Emily Anderson and Ryan Christensen rehearse "The Cask of Amontillado" at the Duncan LittleCreek Gallery for the fourth annual "Poe & Pints" in 2017. Tickets for the popular event go on sale Aug. 24.

ELKO – “All the world’s a stage, “Shakespeare wrote more than 400 years ago. For the actors in Poe & Pints, the quote rings true.

Taking over the DLC for the fourth year in a row, the sold-out Poe & Pints combines the suspenseful work of Poe with samples of ales, beers and ciders from western craft breweries for audiences of adults 21 and older.

For about a week, the DLC becomes a makeshift theater for rehearsals and performances. The seating area is the stage; the basement is the wardrobe and changing area; the kitchen is the makeup room; and a cozy spot near the bar is the sound and light booth.

Performing in a nontraditional space is known as “guerilla theater,” and the actors wouldn’t have it any other way, said Emily Anderson, actress, producer and costume designer.

It’s a good – and challenging – experience for new actors to perform in an unconventional theater, Anderson said.

Rhoswen has acted in local productions since she was 13 and said she is happy to see how the theater community has grown to hosts works not normally seen in the area.

Anderson agrees that the production is “different and fun,” adding that the interpretations of Poe’s classics, such as “The Cask of Amontillado,” are changed each year to keep them fresh.

This year, Poe’s story of revenge is told by two men and one woman who acts as the narrator. Last time, it was performed by two women and one man, Anderson said.

Because of the limited seating and the popularity of the production, Poe & Pints sold out two weeks after it was announced this year, said director and Poe fan Frank L. Sawyer.

Sawyer explained he merged dramatizing Poe with his idea of a tasting event that “focused on craft beer [from] small-production breweries that aren’t sold in town.”

Thanks to the “craft-beer explosion in the last four or five years,” people can now purchase some of those beverages featured at earlier Poe & Pints, including the Reno-based midsized brewpub, Brasserie Saint James that was served at the first Poe event, Sawyer said.

Poe & Pints’ last sold-out performance is Oct. 7 at the DLC. For information, visit www.poeandpints.org or call 934-3721.

Historic brewery is making a case for reusable beer bottles

ELKO — One year ago, in the height of the shutdown, Bethany Headley and Neena Moore chose to inspire and encourage others by running the first…

This young man was found on 5th Street and brought to the shelter for safe keeping. He is a sweet... View on PetFinder

Simple and adaptable strawberry-almond crumble bars great for breakfast, a snack or even dessert

Try these strawberry-almond crumble bars. They are incredibly easy to make and endlessly adaptable to whatever fruit is in season.

The best-paying cities for electricians

Electricians can enter the field without four-year degrees and can instead opt for a less expensive trade school education or an apprenticeship that allows them to earn while they hone their skills.

Safety regulators warned people with kids and pets to immediately stop using a treadmill made by Peloton after one child died and others were injured.

Professor Hanington's Speaking of Science: The science of ketchup or catsup

If I’m on the go and buy a fast food lunch, one of my favorite practices is to squeeze out a pile of ketchup from a few of those red and white…

Vertical Harvest is raising food and futures in Wyoming

The urban farm uses hydroponics to grow microgreens and commits to job-creation for adults with developmental and intellectual disabilities.

The cities spending the most on residential construction

One of the major housing market trends that has emerged from the COVID-19 pandemic is a preference for single-family housing, and this increased demand is driving a surge in new home construction.

Five of the most affordable new SUVs for 2021

Lane Elizabeth as the narrator in Edgar Allan Poe’s “Lenore” turns to the audience following the death of Lenore, played by Kodi Goddard, during a dress rehearsal of “Poe & Pints” at Duncan LittleCreek Gallery.

D.J. McCoy, Emily Anderson and Ryan Christensen rehearse "The Cask of Amontillado" at the Duncan LittleCreek Gallery for the fourth annual "Poe & Pints" in 2017. Tickets for the popular event go on sale Aug. 24.