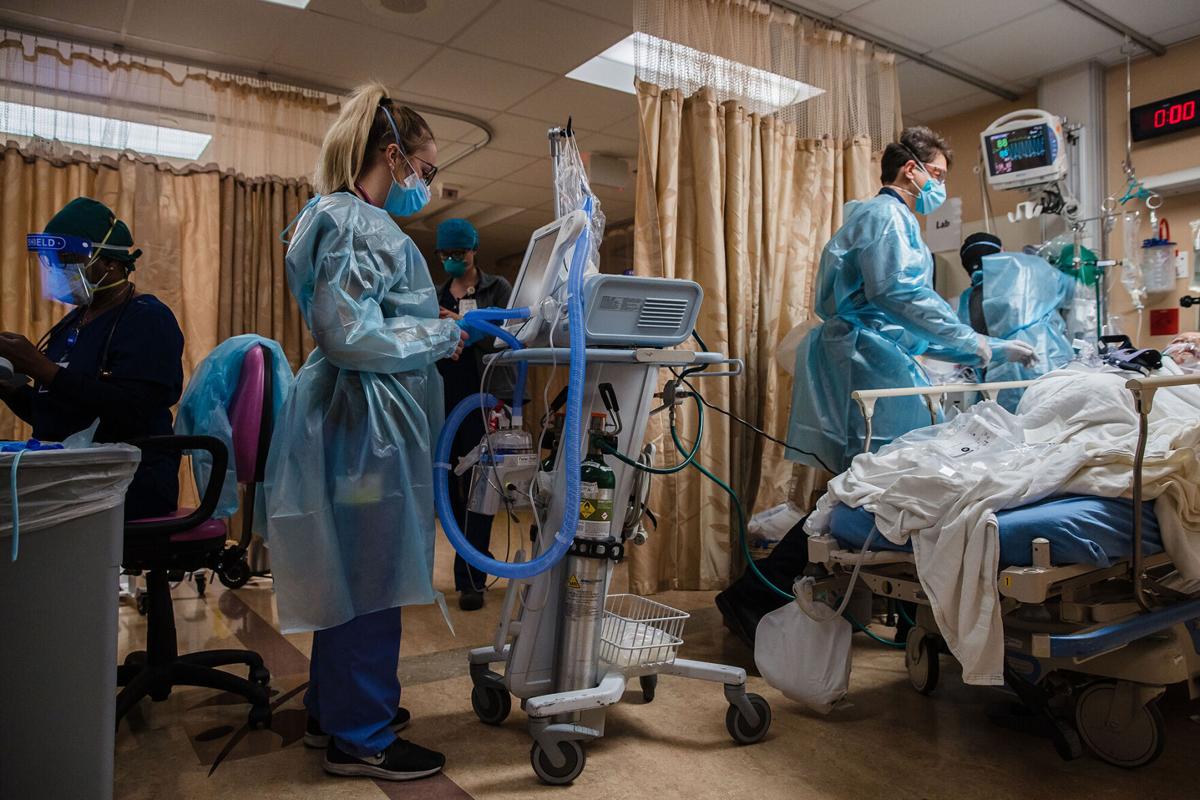 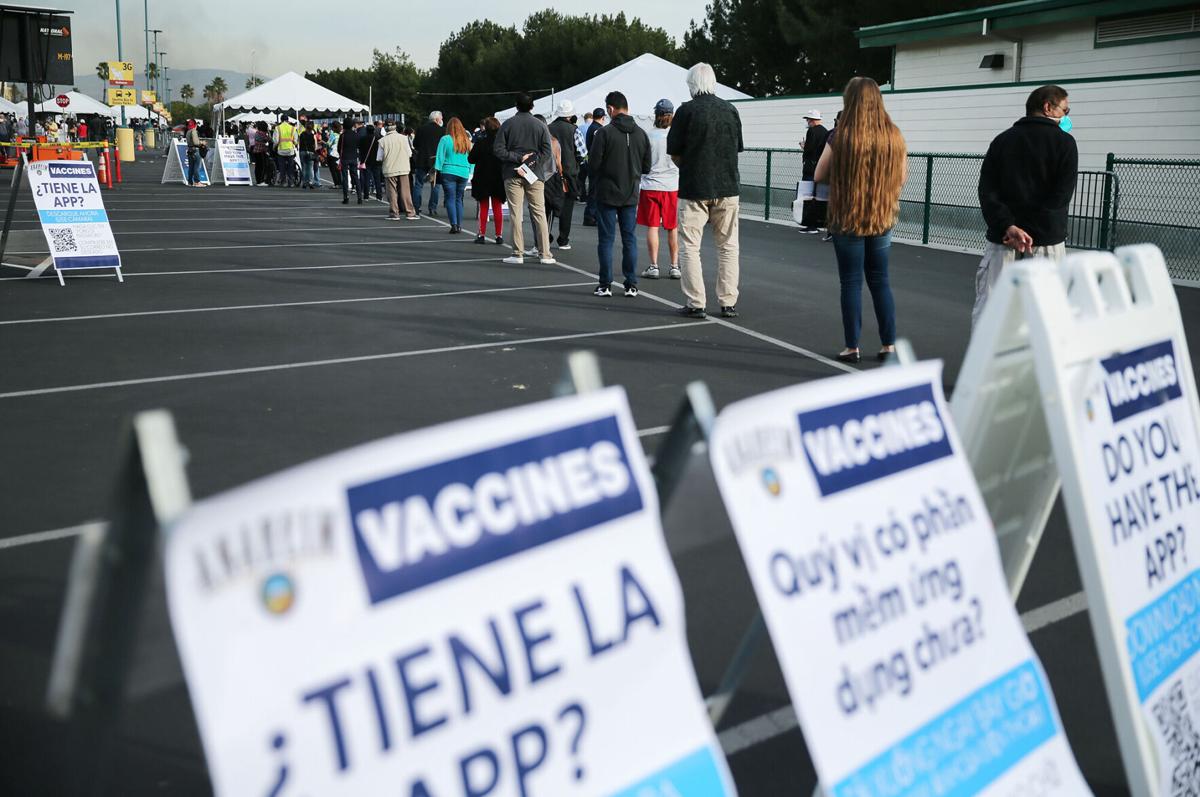 People wait in line to receive a Covid-19 vaccine at Disneyland Resort on January 13.

At the current rate of daily fatalities, the US death toll from the Covid-19 pandemic may surpass 400,000 before President-elect Joe Biden is sworn in on Wednesday.

Another 14,400 Americans are projected to die from the virus over the next six days, according to an ensemble forecast published by the Centers for Disease Control and Prevention.

This comes as the nation's health care system scrambles to keep up with the influx of new patients, with more than 128,000 people hospitalized across the country, according to the COVID Tracking Project.

The City of Laredo, Texas, tweeted an "emergency message" Thursday saying their medical professionals are overwhelmed with the surge in Covid-19 cases.

"Our medical professionals are overwhelmed with the surge in COVID-19 cases. Lives are at stake, and we are asking you to stay home unless it's absolutely necessary ... save a life," the tweet said.

Since the pandemic began, more than 388,000 people have died from Covid-19, according to Johns Hopkins University data. And on Thursday, the US recorded its 10th day in a row of more than 200,000 infections.

More than 9.6 million people have received their first dose of a Covid-19 vaccine, with more than 1.3 million of those having received their second dose, according to data published by the CDC.

It's far from the target of 20 million vaccinated by the end of 2020 set by officials with Operation Warp Speed. While the operation's chief adviser, Moncef Slaoui, told CNN the figure was a "hope" and not a promise, Biden has called the vaccine distribution rollout so far "a dismal failure."

At least one state, however, says its distribution is ahead of the game.

West Virginia Gov. Jim Justice told CNN that as of Monday, every vaccine dose received by the state had been administered or assigned to be given within a day or so. The state leads the nation in terms of first doses administered per capita, according to the CDC data, nearly doubling the national rate.

"We've absolutely not gone with the federal model," Justice told CNN's John King on Thursday. Instead of using chain drugstores to administer the vaccine, the governor said the state has relied on partnerships with local pharmacies as well as the state health department and National Guard to distribute the vaccines effectively.

"It's as simple as mud. If you can get shots in arms, you're going to save lives," Justice said. "We don't need to sit around trying to develop systems or meeting with committees or whatever. We needed to act. We needed to move."

Other states are not having the same success as West Virginia.

Texas Gov. Greg Abbott said Thursday that the state is leading the nation in total vaccine distribution, with 1 million vaccines administered according to CDC data.

The incoming Biden administration has been critical of the Trump administration's most recent vaccine distribution plan that calls for states to open vaccination access to all Americans ages 65 or older, as well as those with chronic conditions who are at higher risk of severe disease.

A member of Biden's coronavirus advisory board on Thursday cautioned against the new parameters. Although almost 180 million Americans would be eligible for the vaccine under the plan, he said, the supply necessary to handle this number would not be reached until summer at best.

While the vaccine rollout generally provides long-term hope for the country to overcome the pandemic, the situation nationwide still requires preventive measures.

In Missouri, lawmakers canceled next week's legislative session due to the rise in Covid-19 infections.

"Due to the rising number of COVID-19 cases in the building, we are exercising an abundance of caution to protect members, staff, and visitors by canceling session next week. Our goal is to return to work the following week," read the statement from Missouri House leadership.

Experts are hoping precautions can help turn the tide of debilitating case numbers, like those faced in California.

Available ICU beds have reached their lowest level, according to the California Department of Public Health. Less than 1,100 ICU beds remain throughout the state, a shrinking number from the beginning of the surge in November.

Los Angeles County has been particularly struck hard. The seven-day average of deaths in the county from Covid-19 is 1,644 people, according to JHU data. This averages to about one death every six minutes.

Watch Now: Tips to get the most out of your home security system

Watch Now: Tips to get the most out of your home security system

Things to avoid in the kitchen with toddlers

Things to avoid in the kitchen with toddlers

Student Loan Deferrals Can Impact Your Credit: Here’s How

Student Loan Deferrals Can Impact Your Credit: Here’s How

Sign up here to get the latest health & fitness updates in your inbox every week!

Doctors, personal trainers share the safe way to return to exercise after COVID-19

A study published in JAMA Cardiology in July found that 78 patients out of 100 who had contracted COVID-19 experienced cardiac irregularities, despite not having any preexisting heart conditions.

While tens of thousands of Americans are infected with the coronavirus each day and more research suggests variants threaten another surge, some state leaders are loosening Covid-19 restrictions against the recommendations of health experts.

8 ways to fall back asleep after waking in the night

Here are eight tips from sleep and anxiety experts on how to shut down that whirling dervish of a brain and coax your body back into much-needed sleep.

One Arizona county has so many vaccine doses, it's now able to offer them to anyone over 18

Concerned that there weren't enough people signing up to get vaccinated against Covid-19, officials in one small Arizona county changed the vaccine eligibility requirement to encourage more people to make appointments.

The risk of death from Covid-19 is about 10 times higher in countries where most of the population is overweight, according to a report released Wednesday by the World Obesity Forum.

Doctors sometimes recommend that people under 60 wait to get a knee replacement because these joints typically last only 15 to 20 years.

For weeks, public health leaders across the US have stressed that now is not the time to ease Covid-19 restrictions and let up on safety measures, warning that another potentially dangerous surge, fueled by variants, could come soon.

Flavanols give fruits and vegetables their bright colors and are found in tea and cocoa. Research shows they appear to improve blood flow to the brain.

As officials and health experts race to get Americans vaccinated against Covid-19, some Catholic bishops have weighed in to discourage Church members from getting the latest, single-shot vaccine from Johnson & Johnson when alternatives are available.

People wait in line to receive a Covid-19 vaccine at Disneyland Resort on January 13.