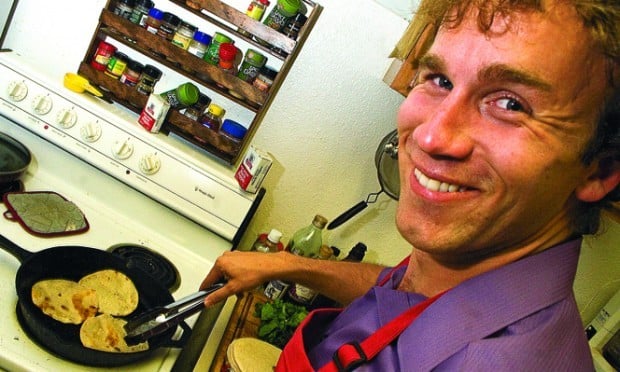 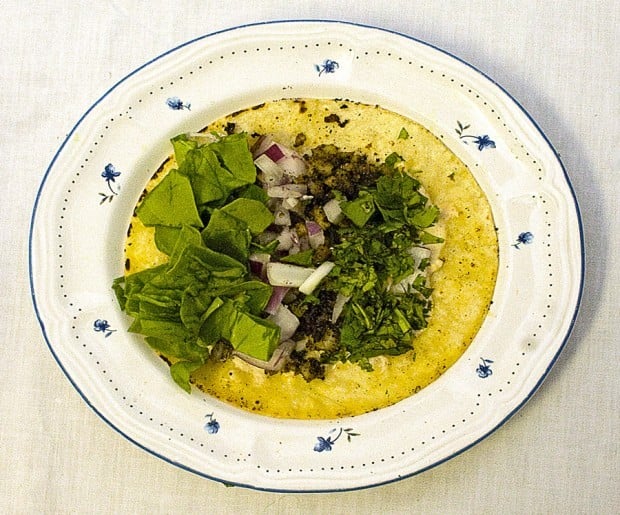 The finished fish taco with sauce spread over the bottom of the tortilla. 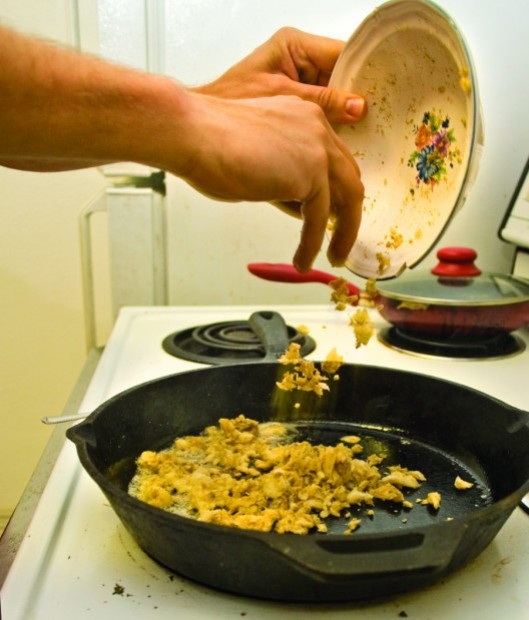 The herb-breaded fish is dropped into the skillet to brown. 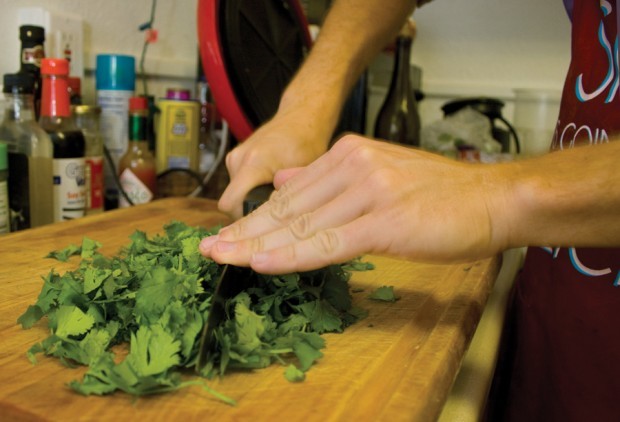 When I lived Reno, I had a bit of free time on my hands and access to interesting (read: cheap) meats of all tripes.

Among the other things I chose to do with that free time was to cook, to work on recipes and techniques I’d never tried before and otherwise to try my best to emulate Julia Child, or her otherworldly counterparts.

Breading the fish and pan-frying did not create a product I wanted to eat: much too much oil, too little flavor.

I moved on to heavily herbing them in cumin mixed with garlic powder and a bit of salt.

I then figured out which fish worked best, at least for me: catfish.

At the time, catfish was the cheapest of the fish, had the perfect taste (not too fishy but enough to tell one, “Hey, I’m a fish you’re eating. That is all.”) and most important, had the right consistency — it didn’t fall apart when being pan-fried or pan-cooked.

It is not a crumbly fish like pollock or sole, making it the perfect candidate.

And its texture, the one thing that scares so many picky eaters away from erstwhile delicious foods, is just right.

After I figured out what to do with the fish, the next step was to step up my fillings game. After all, a fish taco isn’t just the fish, its also the fixin’s.

I always use small corn tortillas that I’ve either heated up in a pan until they’re about to brown or otherwise warmed up. I prefer mine to be spotted brown, but still pliable, because I prefer the taste.

When it came to the fillings, I eventually realized I could substitute other leafed greens for cabbage. I chose the super-food spinach, baby or adult, and chopped it, just as I would for cabbage. I diced red onions and cilantro, to round out the vegetable fillings. Others also dice tomatoes; in fish tacos, they’re not my thing.

What makes a fish taco a fish taco is usually the sauce. I took a page out of the book of Mark Bittman and adopted a sauce he used for Mexican food cart grilled corn.

The sauce’s base is either mayonnaise, sour cream, yogurt or a combination of the three.

Add in a liberal dose of lime juice (to taste), chopped garlic (I’m lazy and buy huge jars of pre-chopped), garlic powder, salt, chili powder and some hot sauce (I use Tapatio and if that’s unavailable, Valentina.) Mix it up, add more of whichever ingredient to taste and (insert signature word,) you’ve got the sauce.

This recipe is, if nothing else: scalable, flexible ... fishy.

1/2 teaspoon salt or more as needed

1/2 cup mayonnaise, yogurt, sour cream or combination of the three

1 dash of salt to taste

1. Mix the cumin, garlic powder and salt in a bowl. Roll the fish in the mixture.

2. Mix the mayonnaise, yogurt or sour cream, the chili powder, garlic powder, garlic, lime juice and hot sauce and salt, all to taste.

3. Put a teaspoon of vegetable, canola or other high-temperature oil in a pan and put on medium high heat. When pan is hot, put the fish in the pan, without it being crowded. Pan-fry until cooked, brown is not lightly blackened. Put next batch of fish into pan and repeat process until all is cooked.

4. Prepare or heat up tortillas. Put a very small dollop of sauce on the tortilla and spread over the tortilla or put on top of other ingredients. Put fish, cilantro, onion, spinach in tortilla and enjoy. I suggest putting the fish, onion and cilantro on first, followed by the spinach.

NNYSA United operates many travel soccer programs for various age groups from U7 up.

The certified-organic farm is rooted in five generations of family farmers.

Struggling lingerie brand Victoria’s Secret, which has been closing stores in recent years, is getting rid of its scantily clad Angels.

Speaking of Science: To eradicate a virus

The past year and a half has been a dramatic demonstration of what a new virus can do to our world. Nearly 4 million people have died so far (…

Ford Maverick compact pickup starts under $20,000 with a hybrid powertain and gets 40MPG. A larger engine and four-wheel drive are available.

While most folks know how to protect themselves from the sun and heat, remembering to protect your pet while out and about is also important.

"He was our constant, cherished companion during the last 13 years and was adored by the entire Biden family," the Bidens said in a statement.

Who's your TV dad?

With Father's Day closing in, we wondered which TV dad most closely resembles your own. Take our quiz, and think about how your dad reacts, or would have reacted, to such situations.

While renters are typically prevented from “altering” a property, you still can spice up your space without upsetting the landlord. Here are some tips.

The finished fish taco with sauce spread over the bottom of the tortilla.

The herb-breaded fish is dropped into the skillet to brown.