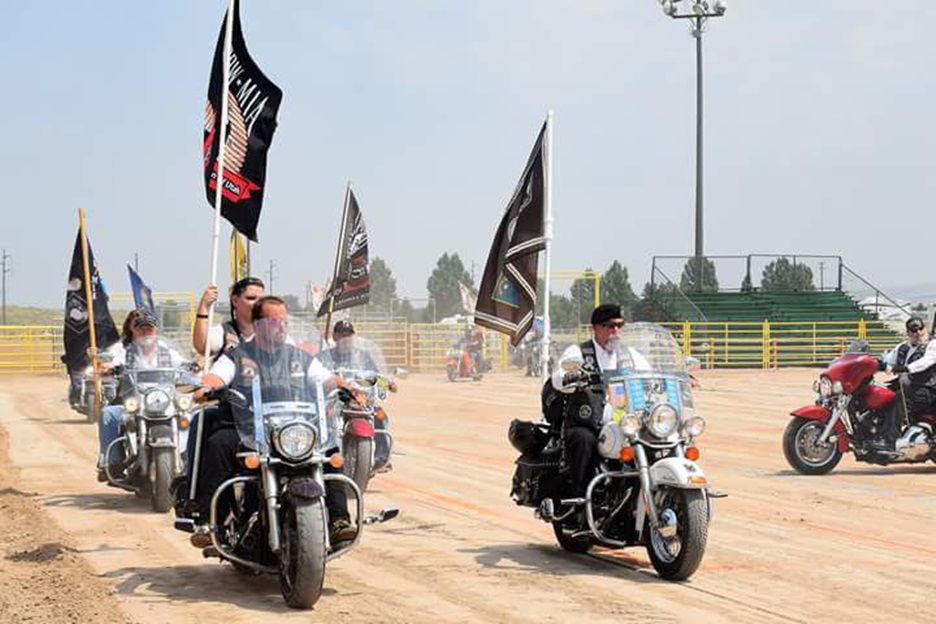 POW-MIA motorcycles display flags as they ride in support of finding POW/MIA and KIA/BNR from the Vietnam War. 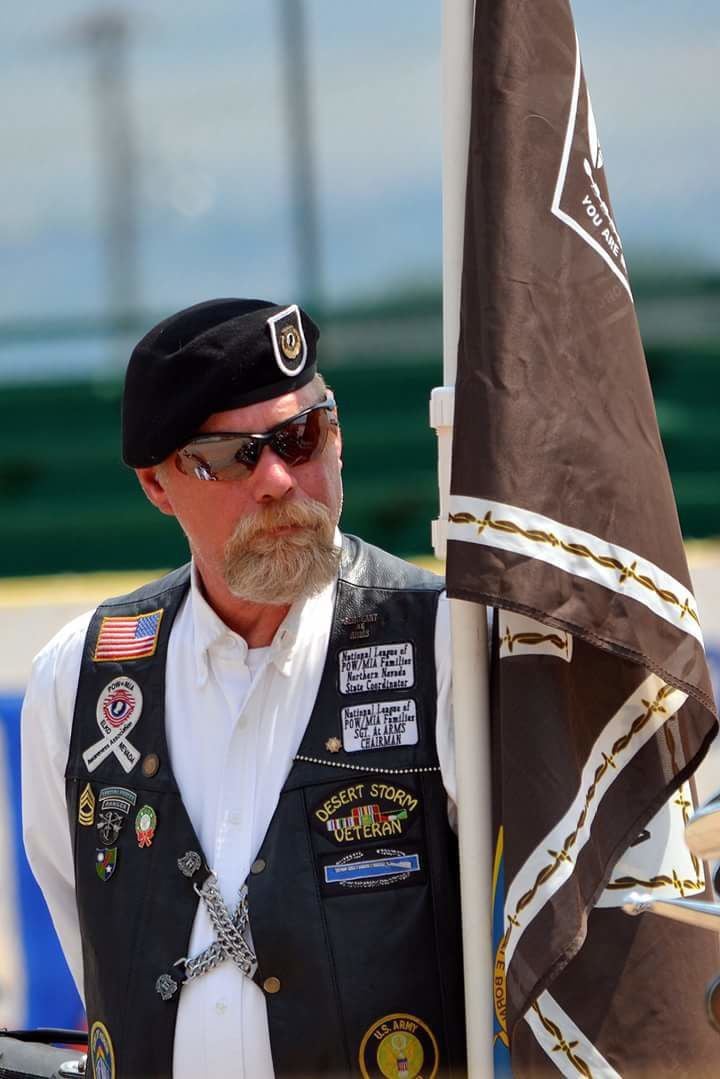 ELKO — Les Brown spent 20 years in the Army, retiring in 1998 as a master sergeant. Life out of the Army — away from his military family — was hard. He’d had a clear purpose in the service: Serve and protect. But in the civilian world, he didn’t have that until he discovered POW/MIA.

“I got involved in it in 2004. Right after I bought my white Harley,” he said. “I met two guys that were wearing the patch at the Red Lion and was like, ‘Guys, where did you get this big, beautiful patch? I want one.’ Come to find out one of them was the director and founder for Pocatello. The other one was the Ex-O at the time.

“They said, ‘You get ‘em from us.’ So we went outside and he gave me one. I went to the Jamboree with them. And talked to them. I spent the whole day talking to them.”

That encounter changed the course of his life.

In 2006, Les and his wife, Gracie, went to Pocatello to attend a POW/MIA rally.

“I sat through their ceremony, their opening ceremony, and I had big tears running down my face … ’cause I had this large hole.

“And I said, ‘I know what’s missing. I know what I need to do.’ So we talked about it all the way home. I said, ‘I want to start an organization.’”

When they got back to Elko he committed to this new task, becoming the founder and director of the POW/MIA Elko Awareness Association.

POW/MIA is an acronym for Prisoners of War/Missing in Action. The Elko Awareness Association is a satellite of the National League of POW/MIA Families. The league’s website defines its mission as “supporting our POW/MIA and KIA/BNR [killed in action/body not recovered] from the Vietnam War … to obtain the release and return of all prisoners, the fullest possible accounting for the missing, and the repatriation of remains of those not yet recovered who died while serving our nation.”

To Brown that means keeping “them on track. We keep them — our governors, senators, and congressmen — held to the fact that, ‘Hey, you made this promise, you gotta keep it.’ And locally, here, our job is to recognize, honor our military, and keep those names out there.”

To help accomplish its mission the association holds several events throughout the year. As director, it is Brown’s job to keep it all organized. He starts by filling in the dates, such as the annual National League of Families event in Washington, D.C., or the National POW/MIA Recognition Day in September. Then he fills in other related events for the association to participate in. One local favorite is the association’s chili feed in February.

One year Brown thought he would change the menu to spaghetti.

“That was bad. Everybody in the community complained. My phone blew up,” he said.

So the group stuck with chili.

Whether they are feeding the community, escorting recruits out of town, or setting the Missing Man Table, the goals are always the same: awareness and education.

“If you got a family, and your kids are into it, bring the kids. … We do stuff for the kids, too. Because who’s going to take over for us if we don’t teach the kids?

“If the kids believe in it then they can pick up where we left off and maybe they’ll do a better job than we’re doing. … Maybe the kids will pick it up and get the job done.”

Besides the cool motorcycles, two other tools are used to raise awareness are the POW/MIA flag and POW/MIA bracelets.

The POW/MIA flag and its imagery is not legally restricted because the League wants the symbol to be as widespread as possible. It is a visual reminder of those who have not yet returned home. Their flag is also the only flag to fly over the White House other than “Old Glory.” It is flown in honor of National POW/MIA Recognition Day, which is the third Friday of September.

The metal bracelets are simple, engraved with name, rank and date of loss. They are meant to be reminders of the many who never returned and expressions of the hope that one day they will be brought back.

The league’s efforts have not been in vain.

“They’ve brought home almost a thousand people since we started the organization. They’ve been identified and brought home to their families,” Brown said.

The massive recovery and identification process is supervised by DPAA (Defense POW/MIA Accounting Agency) stationed in Hawaii. The agency, which is part of the Department of Defense, was formed to consolidate the efforts of two other agencies, as well as the science.

“They find the remains and then they check the DNA,” Brown said, describing the process. “They started out with what they call mitochondrial DNA, which is traceable through the mother for generations. Now they’ve gone to mitochondrial DNA and two other types of DNA. They can get DNA from a tooth. … They can trace that and figure out who it is. Sometimes that’s all the family gets is, you know, a tooth.”

The work “takes them several months. They do that with eyewitnesses, with military reports. They literally go all over the place. And they research different areas, they talk to eyewitness who are now up in age.

“They have to compile all this information and then they start excavating. They have geologists and forensic scientists and all these people, and they hire local people to dig up the dirt. It’s neat to see what is going on … The whole science realm is just humongous. They are leading in the DNA recovery and DNA science.”

Once the remains are identified they are returned to the family. Some have even received the honor of burial at Arlington. Brown and his wife have attended several of these ceremonies and are planning to attend one this year.

“This will be my fourth funeral in Arlington National Cemetery,” he said. “Every one of them is different depending on their rank and what happened to them. Most people don’t want to go to funerals, but when you go to Arlington it is so over the top. It’s so honorable to be there and to see the honor that they receive, it’s just amazing.

“It kinda energizes me, going to all that stuff, to keep the rest of it going. Because there have been times I’ve wanted to – I’m done… [The most difficult thing is] getting people educated to what we are doing and how important it really is. It’s important to me, but it may not be important to somebody over here. Everybody has their own idea as to why it’s important.”

Whether that family is blood related or not doesn’t matter.

“One of my platoon sergeants years ago said that if we go into a combat zone these people that you’re with become your family. It didn’t make a whole lot of sense until we went into that combat zone and he was absolutely right …

“You have to count on each other to get home. We all build this bond to cover each other so that we can do what we need to do, and yet go home, because home is – home is where we all want to be.”

And in some way that is what Brown is still trying to do, help his brothers and sisters get home.

Do you know someone in the local area who has inspired you or others to become better people? Send their name and contact information to news@elkodaily.com to be considered for our "Local Inspirations" series.

Local Inspirations: People who are making a difference in Elko County

ELKO – Can a smile change a life?

Local head of POW/MIA under fire

ELKO – A U.S. Army veteran who started a local POW/MIA group 15 years ago is at war again, this time with “stolen valor” groups claiming he fa…

ELKO — When children are abused they express decreased self-esteem, feelings of guilt, loss of motivation and other negative behaviors. An emp…

POW-MIA motorcycles display flags as they ride in support of finding POW/MIA and KIA/BNR from the Vietnam War.