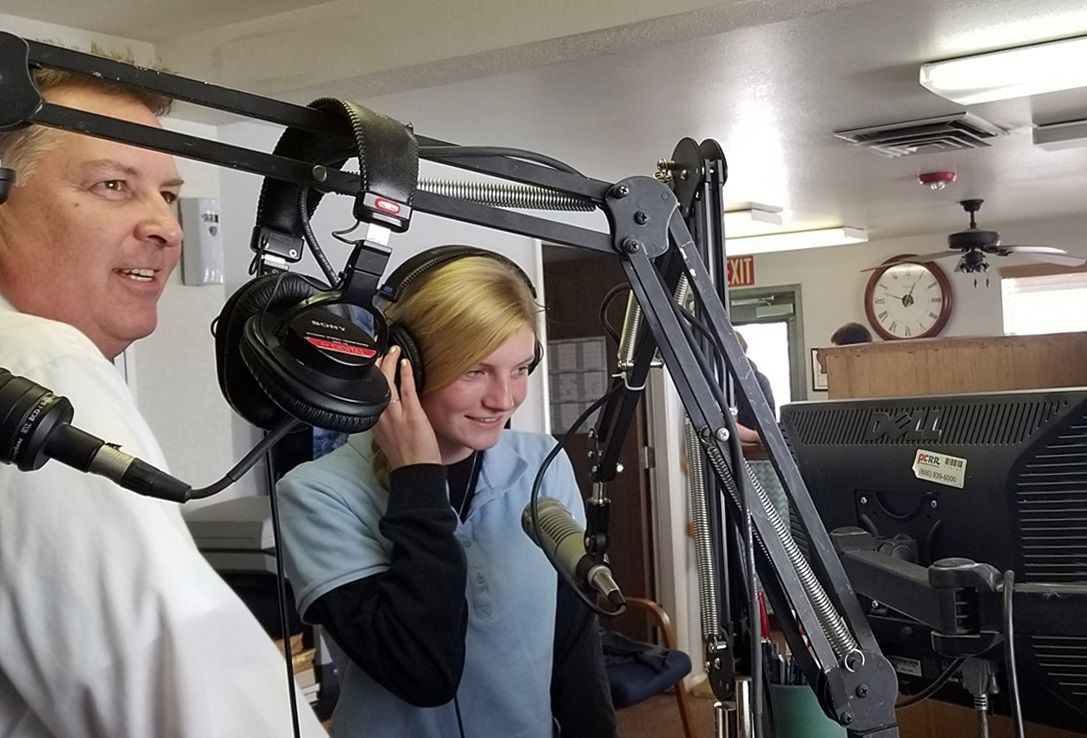 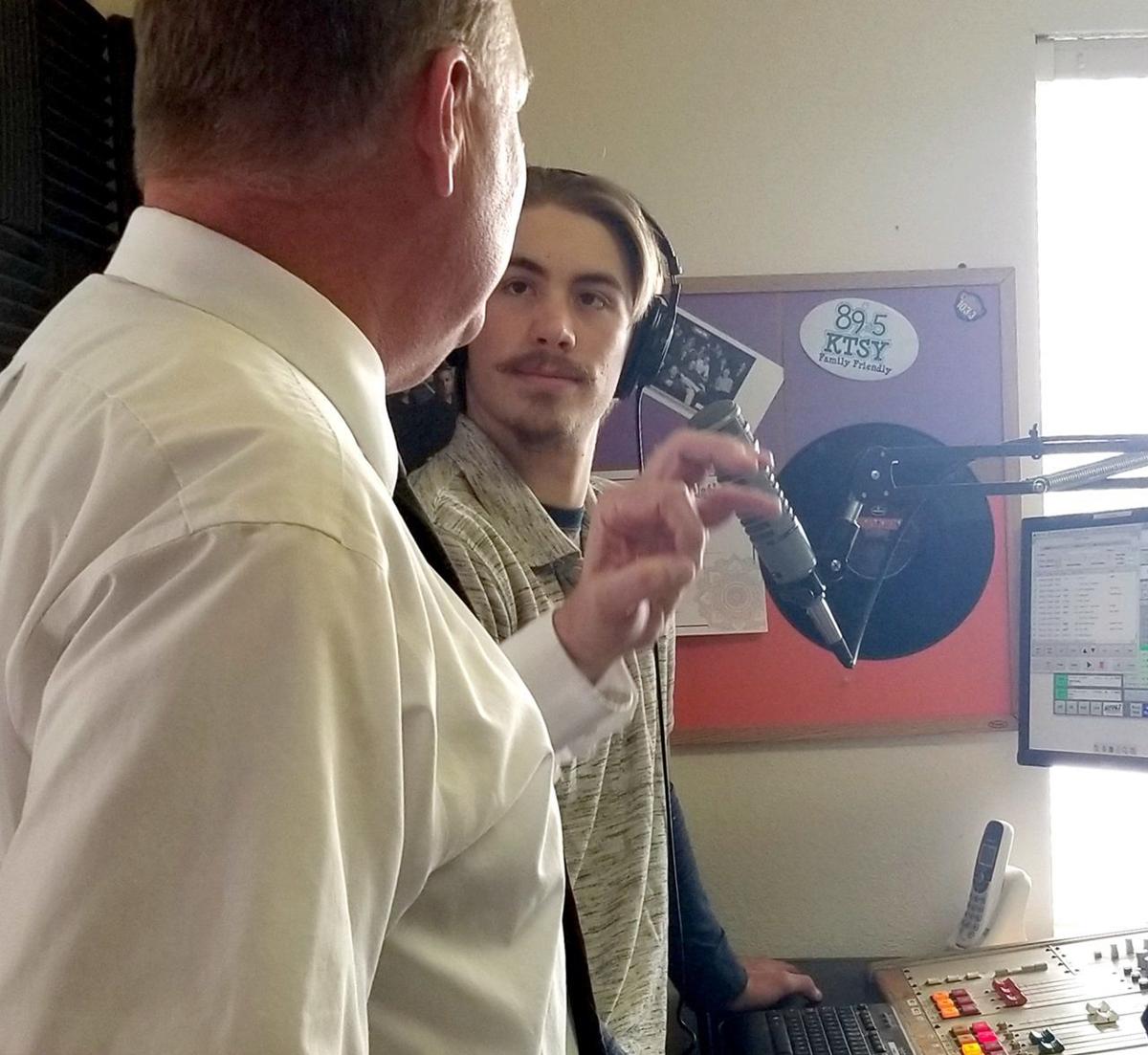 Herman talks with Daniel Johnson at the sound board.

“It’s a labor of love,” Herman said, “So I don’t know if I’d even call it a challenge. It’s so much fun to run both the school and the radio station. Would I do it for free? Probably. It’s one of those things where you’d do it even if you didn’t make any money.”

Herman began to hone his radio skills in Reno.

“I was actually a mortgage broker for many years, and it’s not very creative to be a mortgage broker. Lucrative, yes; creative, no. … I used to be in journalism in Channel 2 in Reno and Channel 8 in Las Vegas. And then I went back to college. … I became a mortgage broker which lasted 15 years but in the interim I was also a teacher at Reno Christian Academy.

“I remember going to my old professor in Reno from UNR and just asking, why do I feel this way? He says, ‘You know what you’re experiencing? This is a mid-life crisis.’” Even though he was only in his late 20s, Herman had to agree.

“I’m an art major and Spanish major. I did a lot of communications as well during college, but that wasn’t my major.”

The professor went on to tell him, “You need a creative outlet.”

While not as obvious an art media as painting, Herman chose radio to be his canvas. “I thought you know what, I’ve already done the media for the TV news so I thought I’d love to do radio, it’d be fun. So I went down to Pilgrim Radio. And they were like, sure, we’ll put you on in the mornings. … That has been a good creative outlet.”

But eventually it became clear that more of a change was needed.

“I was tired of doing mortgages. You can only get so creative with mortgages…. So I actually gave up my clientele… I gave it all up because I thought, I am losing my mind doing this.”

In 2005, with nothing to hold him in Reno, he moved his family to Spring Creek.

“This is beautiful. We thought we could raise our kids here. We sold our house … and I thought, No, we’re just going to invest, and live, and homeschool our kids.”

Life was going the way he had intended until the possibility of something bigger came into view.

“I was actually running the homeschool group here,” Herman said. “There were four other families. … And one of them at one of our meetings said, ‘Oh, yeah the little Christian school is closing.’

“I perked up because I was a teacher for so many years at a Christian school in Reno. I said, ‘Why what’s going on?’

The news that Ruby Mountain Christian School was closing “did not sit well with me. It was festering in my soul.”

The next day he called up the retiring administrator, Randy Wetmore, and set up a meeting. RMCS was run under the umbrella of Ruby Mountain Bible Church since 1980.

“I remember Randy having this perplexed look, and he said, ‘You would take this school over?’

When the school opened for the 2008-2009 school year it hadn’t just changed leadership it became a new school, Spring Creek Christian Academy.

“(SCCA) got its wings from Ruby Mountain Christian School. … They were the wind beneath our wings. … Randy, of course, loved education, and so he was completely in support of us. And guess what, so were all the members of the church. It was a wonderful year and a half.”

When it became necessary to leave the nest, Herman explored different options before accepting an offer from Don Decker to rent half of the old Spring Creek Utilities building.

“We came to look at this place and I said this will never work as a school. It’s all compartmentalized. It doesn’t work, but lo and behold it does.”

When Decker was diagnosed with cancer he gifted the building and surrounding property to the school.

“I would imagine,” Herman said, “somebody would start to gather in your wealth … but they didn’t do that, they started giving away properties ... It is unbelievable the amount of providence that has taken place –God’s providence – throughout the years to this little school. By all normal means it shouldn’t be open. It shouldn’t still be in existence. But here we are.”

The gift has really helped with the administration since the biggest challenge to running a small school is finances.

“It boils down to money and volunteers. It just always does,” Herman said.

He wasn’t sure if a school could exist without a mother church. Herman loves that now because the school isn’t the child of one church it has become common ground for many of them.

“Because of this one ministry the churches are united in one way or another. And I love to see them come together for our events and mingle,” he said. “I usually stand afar off and just watch because it is so neat to see all these congregations to come together … and oftentimes it is because of the school.”

In May 2015, Herman excitedly shared his creative outlet with the school. MY99.7, the school’s little radio station, began broadcasting. Not only does it give the students another opportunity for creativity, it also allows the students to show their personality.

Every student has been able to help with the station, from kindergarten through 12th.

“It’s very unusual that the personality for this age group comes out but it definitely does,” Herman said.

When starting the station Herman believed that since they were a Christian school, the radio should have all Christian music. But when he discovered that the kids weren’t listening to their own radio station, he took a step back.

“We started asking the kids: What are you listening to?”

“We thought that is our audience, it’s these kids … and that’s what we are still doing. We put in about a quarter Christian music that is fun-loving and upbeat … like these kids.”

Daniel Johnson, who used to be on the radio daily, wishes he had the time to do it again.

“At first, you definitely are stressed out about it, but then after a little bit you relax and have a conversation about dumb stuff, and laugh, and hopefully help other people laugh,” he said.

Local Inspirations: People who are making a difference in Elko County

ELKO — When Gail Mierins moved to Elko from New Hampshire with her husband and two small boys, she struggled to be content in a small town.

Herman talks with Daniel Johnson at the sound board.