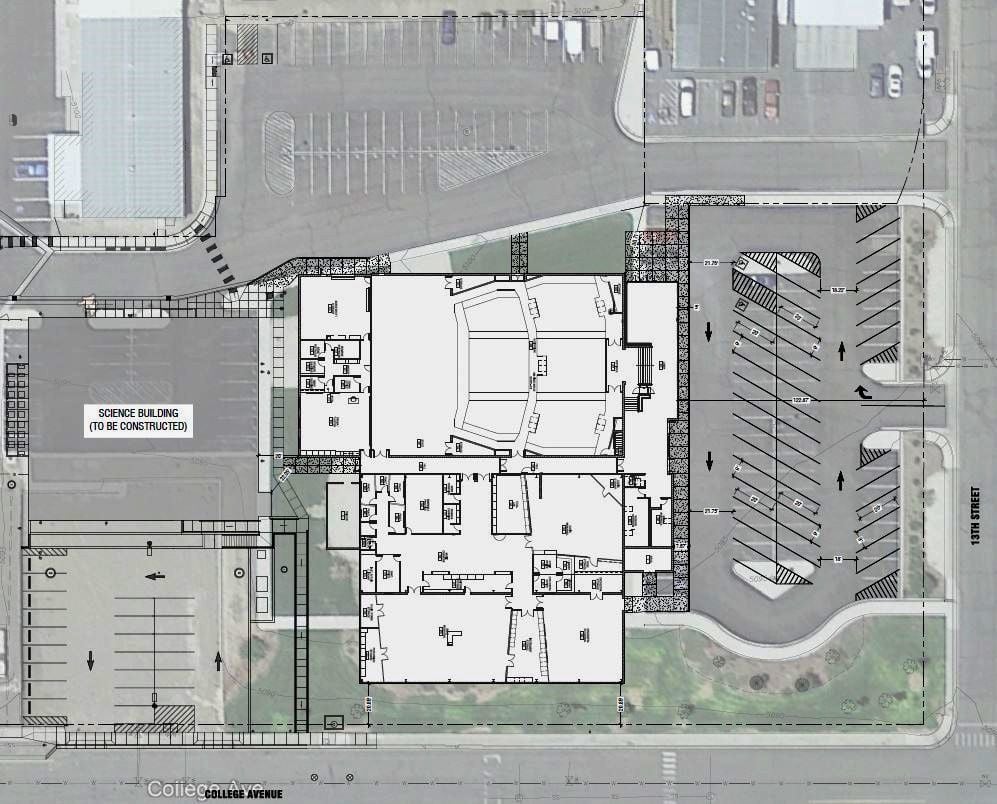 This diagram shows the location of a new performing arts building to be constructed next year at 13th Street and College Avenue. Work is already underway on a new science building at left.

A rendering of the Elko High School performing arts building from northeast perspective by Design West Architects. The building will house an auditorium and rehearsal space for band, choir and drama classes.

ELKO – Three school district capital improvement projects — including a $12 million performance arts building — will be going out to bid in January.

The Elko County School District board of trustees unanimously approved a request to seek bids on the building at Elko High School, a mechanical upgrade at Wells High School, and remodeling of two EHS buildings.

The projects were included in the district’s five-year capital investment plan that was approved by the board in June.

Funded through pay-as-you-go property tax, the budgeted cost for all three projects is approximately $17.5 million.

Work on the $12 million performing arts building could start this spring, while construction continues on the new science building next to it.

Designed to house practice and rehearsal space for the Elko High School Band of Indians, Choraliers and drama department, the structure includes an auditorium with seating for approximately 830 people.

The auditorium will require a special subcontractor to the general contractor for the acoustics, said Casey Kelly, director of building operations and construction for the district.

Having a dedicated space for performances will reduce costs to rent the Elko Convention Center’s Laurena Moren Theater, said Superintendent Todd Pehrson. For the 2018-2019 school year, the expense to rent the facility about 10 or 12 times was approximately $20,000.

“The district and convention authority have had a positive relationship for years, and we continue to appreciate the use of the theater,” Pehrson said.

The new auditorium could also boost the students’ confidence in annual concerts and productions.

“It makes the performances more meaningful for our kids when they can showcase [their talent] in such a nice theater,” Pehrson added.

Karen Rogers, Choraliers director, said since EHS’s old auditorium burned down in the 1970s, discussion has been ongoing about constructing a new performing arts building “but it was never the right time.”

Rogers, along with EHS band director Michael Broyles and drama teacher Kelly Moon, met with architects in Idaho and toured a school to develop a basis for building designs.

Having all performing arts classes under the same roof, Rogers said “there will be more opportunities for us all to work together” on productions.

“I am very excited about this new building,” Rogers said. “The community will love it.”

The performing arts building could be completed by November 2020, Kelly said.

The two-year upgrade is estimated at $4.5 million and work is expected to begin in June.

The approval came one month after faculty and students walked into the school Oct. 21 and discovered a heating element blew out.

Pehrson said Wells High School was among many schools in need of a heating system upgrade, but that budget constraints allowed one mechanical upgrade a year.

Going out to bid will allow materials to be shipped to the school by the end of the school year for work to begin on the first phase immediately after the last day of school, he said.

The installation project is spread out over two phases, during the summers of 2020 and 2021, so that classrooms will not need to relocate during construction, Pehrson said.

The third project approved by the trustees is a $1 million remodel of the Junior and Senior buildings on the Elko High School campus.

The remodel is part of the science building’s construction project, as biology, chemistry and physics classes will be moved out of their current locations to the new structure.

“It’s basically remodeling old science labs and turning them back into classrooms,” Kelly told the trustees.

He added that administration rooms inside the Junior Building will be consolidated at the same time.

The science building is expected to be completed in the fall of 2020.

WELLS – Heat was restored to Wells High School on Monday after an electrical unit exploded over the weekend.

Elko County voters may see the pay-as-you-go tax on their ballot this November.

Permit valuations are on the rise in the City of Elko

This diagram shows the location of a new performing arts building to be constructed next year at 13th Street and College Avenue. Work is already underway on a new science building at left.

A rendering of the Elko High School performing arts building from northeast perspective by Design West Architects. The building will house an auditorium and rehearsal space for band, choir and drama classes.

The southeast perspective of the Elko High School performing arts buiilding is shown in a rendering by Design West Architects.