Democratic contenders debate in South Carolina, days before their primary

Professor Hanington's Speaking of Science: All within one cell
0 comments
Share this
{{featured_button_text}}

Only a couple of months ago, Physarum polycephalum, better known in the media as “slime mold” or “the blob” was making headlines. Although technically a single-celled organism (unlike humans, which are made up of some 100,000 billion cells of various types), it turns out that these strange single celled organisms are highly sophisticated. Not actually a mold and now considered some sort of amoeba, over the last few years scientists have learned that not only can the organism heal itself if cut in half (or into many more pieces), it can also construct highly efficient transport networks with its body, solve mazes, and remember experience with previously harmful substances- all without any kind of central processing system like a brain.

Now this week, a different single-celled organism has made headlines for its surprising abilities. It seems Sentor roeselii, a protozoan found commonly in freshwater ponds, lakes, and even ditches, is capable of making complex decisions. Scientists at Harvard recently found that when provoked with microscopic plastic beads (an irritant), the organism statistically chose to try simple ways of avoiding the beads and only detached from the surface or contracted completely as a last resort. While plenty of living creatures, including most animals, would be capable of making a decision like this in the face of an irritating stimulus, there is no suggestion how a single cell, lacking any kind of neuronal network let alone a brain, is able to make this judgement call. And while slime molds and protozoa are almost undoubtedly different than the cells in the human body, both provide an important example of just how powerful even a single cell can be.

Understanding how single cells work is important because for the majority of the time life has existed on earth, there were no multicellular organisms. Even today, our bodies may owe many of their most important qualities- such as our immune system- to the way single-celled life originated. As pointed out by the pioneer of cell biology, E.B. Wilson, “the key to every biological problem must finally be sought in the cell; for every living organism is, or at some time has been, a cell.” So what can we learn about all types of life on earth, from algae, to dogs and cats, to the bacteria in our gut, from studying cells?

Even today, the estimated number of unicellular species on our planet outnumbers multicellular species by a huge margin. And while single celled organisms are often considered “basal” or “less evolved” than multicellular life such as ourselves, if sophistication is based on ability to survive and thrive, to adapt to environments, unicellular organisms beat us all. They can be found in almost any environment imaginable- from buried half a mile under the ice of Antarctica to surrounding 350C hydrothermal vents on the ocean floor. Many of these so called extremophiles belong to the group archaea- one of the three branches of the tree of life which describes our best idea at the evolutionary relationship between all living things on earth. The archaea and bacteria branches together make up the prokaryotes: single celled organisms that do not contain specific intracellular compartments such as a nucleus, mitochondria, or other organelles. Improvements in genetic sequencing in the 1990s made it clear that while bacteria and archaea share many similarities, archaea are more closely related to eukaryotes- in fact, there is some evidence that the first eukaryotic cell emerged from an ancient archaeal cell that formed a symbiotic relationship with an engulfed bacterium which became the mitochondria.

While eukaryotes include multicellular organisms (such as ourselves) the majority of eukaryotic organisms are single celled. Eukaryotes differ from the archaea and bacteria prokaryotes in a number of important ways, most notably in their much larger size and complex organization. While prokaryotes have no internal organization, with genetic information and various proteins all in what amounts to one large pool, due to their larger size, eukaryotes use compartmentalization in the form of organelles to organize cellular components, separate reactions from each other, and keep genetic material safe. But while eukaryotes share many of these organelles, such as a nucleus to store genetic information and a mitochondria for energy production, eukaryotic cells also show incredible diversity in morphology and way of life. For instance, plant cells not only contain an additional organelle that allows them to produce energy from sunlight (the chloroplast), but also have a rigid cell wall. In contrast, many of the cells in our body are more fluid and flexible. This is made possible by an elaborate cytoskeleton- a remarkably complex system of protein filaments that crisscrosses the cell much like a collection of motors, ropes, and pulleys in an elaborate rigging system. Without the hinderance of a cell wall and the protection to genetic material provided by the nucleus, this allows many solitary eukaryotic cells to act as predators, rapidly changing their shape to engulf other cells in a process called phagocytosis. In fact, there is compelling evidence that eukaryotes first evolved on the planet as hunters. This origin is something that many processes in our body still rely on today, from the way neutrophils in our immune system can engulf dead cells to the way the cells in our gut can rapidly take up nutrients.

All in all, the world of single cells is one full of incredible complexity, but also shocking similarities. From the complex behaviors of single celled slime molds to the key phagocytotic abilities of individual cells within our body, all life on earth is still connected by central processes, such as the genetic code, which suggest a common origin. Given that our bodies rely on sophisticated coordination between some 100,000 billion cells, studying the way in which single cells may make decisions make slime molds and protozoa like Sentor roeselii of fascinating importance.

Hannah Margolis is an Undergraduate Researcher Ragusa Lab, Dartmouth College She can be reached at: Hannah.K.Margolis.20@dartmouth.edu

Professor Hanington's Speaking of Science: The science of Cheetos

English teachers must be happy because just this week a new noun has entered our vocabulary. Before I mention it, you may recall some of the i… 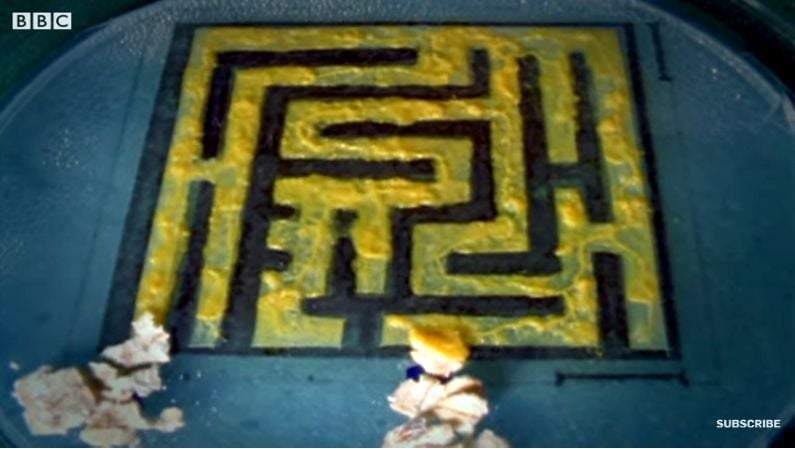 A screenshot of a slime mold maze