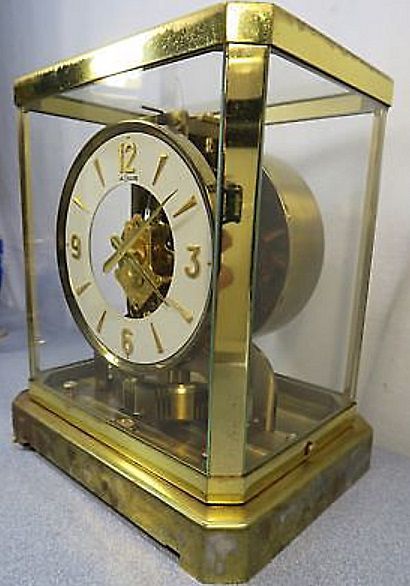 Atmos clock with pressure bellows in back

Production has begun on Amazon CEO Jeff Bezos’ $42 million Long Now Foundation project to build a mechanical clock that will last 10,000 years. Ticking just once every year, it will have a century hand and a cuckoo that comes out once every millennium.

The 500-foot-tall clock is being built deep in a mountain near Van Horn, Texas. In order to run independently of conventional utilities the all-mechanical clock will be powered by temperature differences between day and night. One prediction that Bezos made is that the clock will outlast the United States:

“Over the lifetime of this clock, the United States won’t exist. Whole civilizations will rise and fall. New systems of government will be invented. You can’t imagine the world — no one can — that we’re trying to get this clock to pass through.”

Once this prototype is functional, another will be constructed on the top of Mount Washington near Ely, Nevada. It will be housed in a series of rooms (the slowest mechanisms visible first) in the white limestone cliffs, approximately 10,000 feet up the Snake Range. The site’s aridity, remoteness and lack of economic value should protect the clock from corrosion, vandalism and development.

The lessons learned in the construction of this first full-scale 10,000-year clock will finalize the design of the clock in Nevada.

Can there be devices such as this that continue to work for enormous periods of time? Back in April of 2016 I wrote a column on the battery in the Clarendon laboratory at Oxford that has been continuously ringing a tiny bell since 1840. Known as the Zamboni pile, it is the oldest running battery in the world and has kept jingling through the days of Lincoln, WWI and WWII without taking a breath.

In our modern world of solid state electronics such longevity may be quite common. Scientists believe that transistors and integrated circuits such as micro-processors have extremely long lifetimes because the only thing flowing through their structures are streams of electrons which technically do no harm to the components. The HP-35 scientific calculator I bought in 1972 for $400 after sweating all summer in a dirty steel factory still functions despite being plugged in for over 40 years.

But what about mechanical clocks? As gears spin around they slowly wear patterns into their touching surfaces and will eventually fail. Any axle turning within a bearing will methodically grind itself smaller and smaller and shear its shaft away over time.

Looking online one finds the Salisbury Cathedral Clock in England to be the oldest working clock in the world. Dating back to 1386, it is a faceless device that only struck the hours in its bell tower and was powered by two large stone weights turning wooden barrels in their decent. Hardly a design that could last forever, the clock required human intervention to raise the weights every night.

Are there clocks that can just run on their own volition? Interestingly the answer is yes.

The Beverly Clock situated on the third floor of the Department of Physics at the University of Otago, Dunedin, New Zealand is still running from the day of its construction despite never having been manually wound. Completed in 1864 by Arthur Beverly, the clock’s mechanism is driven by variations in atmospheric pressure produced by daily temperature changes. Pressure changes cause the air in a one-cubic-foot airtight box to either expand or contract, which pushes on a diaphragm. A temperature variation of six degrees Fahrenheit over the course of each day creates approximately enough force to raise a one-pound weight by one inch, which continuously drives the clock mechanism.

Although the clock powers itself, it has stopped on a number of occasions, such as when its mechanism needed cleaning or there was a mechanical failure, or the time the Physics Department moved to new quarters. Likewise, when the ambient temperature has not fluctuated sufficiently to absorb the requisite amount of energy, the clock will not function and the time is thrown off schedule. Fortunately, after environmental parameters readjust, the clock begins keeping time again but must be re-adjusted to read properly.

Can you purchase such a clock that runs for a lifetime without winding or maintenance? Again the answer is yes. Manufactured by the Swiss watchmaker Jaeger-LeCoultre, the Atmos Clock is a timepiece of near-perpetual movement needing no human intervention and almost no energy to run. Invented by Swiss engineer Jean Reutter in 1928, the Atmos clock is driven by a mainspring which is wound by the expansion and contraction of liquid and gaseous ethyl chloride in an internal hermetically sealed bellows. The easily vaporized organic fills an expansion chamber as the temperature rises, compressing a spiral spring; with a fall in temperature the gas condenses and the spring slackens. This motion constantly winds the mainspring where a temperature variation of only one degree is sufficient for two days’ operation.

In order to run the clock on this small amount of energy, everything inside the Atmos has to work in as friction-free a manner as possible. For timekeeping it uses a torsion pendulum, which consumes less energy than an ordinary back and forth pendulum. The torsion pendulum executes only two circular oscillations per minute – much slower than the pendulum in a grandfather clock.

To date, over 500,000 Atmos clocks have been produced and have been the Swiss government’s official gift for important guests since 1950. You can easily buy one on eBay but don’t be shocked by their price.

The boss said to place exactly 9 gallons of water into the trough to water his prize goat but he only gave you 5 and 3 gallon buckets to do the job with. How do you accomplish this?

Make sure you're not hurting your skin with these bad habits

Make sure you're not hurting your skin with these bad habits

PennyWise Episode 24: 10 tips to keep your moving costs down

PennyWise Episode 24: 10 tips to keep your moving costs down

ELKO – Elko children were treated to a glimpse of the courts on Monday with Reading & Robes.

On the Edge of Common Sense: The Fairboard

It was every fairboard’s nightmare when the lightning hit the stage.

Why does white always go first in chess?

Ever since the late 1800s, it has been standard for white to go first in chess. Has the time come to get rid of that rule?

We use batteries every day. From cell phones that need to be charged every night to the heavy lead-acid types that start our cars, batteries a…

Pet of the Week

ELKO — The Elko Animal Shelter’s Pet of the Week, No. 48226117, is a large, mature, neutered Great Pyrenees/Australian Shepherd mix.

When I worked for the Nevada Department of Transportation in the 1970s, I spent many weeks working in the town of Wells. My duties at that tim…

Personal use of hair dyes is very common. But do they increase cancer risk? There have been many studies, with conflicting results.

Speaking of Science: Looking at the numbers: how to perform your own risk analysis

New photograph of Prince George for his 8th birthday

Keeping with tradition, the photo was snapped by his mother, Catherine, Duchess of Cambridge, who has a passion for photography.

EatingWell: An easy spin on a classic Cobb salad

This satisfying salad takes just 20 minutes to make, so it’s perfect for weeknight dinners, but it’s elegant enough to serve to guests.

Atmos clock with pressure bellows in back