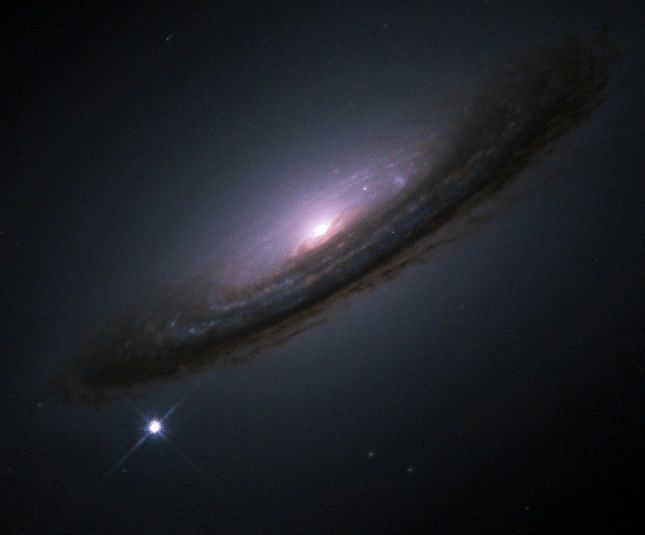 Supernova explosion in nearby galaxy

Astronomers at Louisiana State University announced last week that V Sagittae, a faint star in the Milky Way, is getting ready to blow up.

Located in the nearly overhead constellation Sagitta, the innocent double star system has been slowly gaining in brightness over the last century and is now in the final stages before the explosion occurs. The research team at LSU has given an approximate timetable for the event, saying that during the next several decades the star will brighten rapidly during the death-spiral, appearing as bright as Sirius or possibly even as bright as Venus. Depending on the magnitude of the blast it may even be visible during the daytime.

Speaking before the 235th American Astronomical Society meeting in Honolulu, Professor Bradley E. Schaefer of the Department of Physics and Astronomy announced the strong prediction for the future of V Sagittae, saying that sometime coming up, between now and the year 2083, a supernova will occur. If it does, it will be the first one visible from a star within our own galaxy in over 400 years.

The unlucky star in this process, V Sagittae, is categorized as a white dwarf. In 1902 astronomers discovered it was a variable star, and in 1963 a team of astronomers led by American George Herbig identified it as a binary, meaning it has an orbiting companion star. It’s also in a class of stars called cataclysmic variables (CVs), where an ordinary normal sized star, like our sun, orbits a white dwarf.

About 1,100 light years from Earth, this star system is in a heap of trouble. In a cataclysmic variable situation the two stars are close enough together such that the white dwarf’s intense gravity distorts the secondary star. Material from the secondary star, or donor star, is drawn into an accretion ring around the white dwarf. The material in the accretion disk emits strong UV and X-ray energy as it falls into the white dwarf and because mass is being added to the central star its gravitational pull is increasing. This causes more tugging on the outer star, reducing its radius of orbit. As this keeps happening there comes a point when the accretion rate will rise catastrophically, spilling mass at incredibly high rates onto the white dwarf. In the final days of this scenario, all of the mass from the outer star will fall onto the white dwarf, creating the supernova explosion.

The realization for this outcome came from routine analysis of V Sagittae’s brightness from old photos archived at the Harvard College Observatory that provided a detailed history going back to the year 1890. They found the star has been systematically gaining in intensity every year and has now increased by a factor of 10. This unprecedented behavior was confirmed with additional data collected from the American Association of Variable Star Observers that plotted an increase in magnitude by 2.4 units since 1907.

In the 1930s scientists proposed several mechanisms for supernovas to occur. Sometimes they are the last evolutionary stages of very massive stars. On the other hand, they can also happen when a white dwarf is triggered into runaway nuclear fusion. This is what will happen with V Sagittae when it either collapses to a neutron star or black hole, or it explodes completely. During a supernova the peak optical output can be comparable to the light output of an entire galaxy, before fading over several weeks or months.

Observations of supernovae in other nearby galaxies, such as Andromeda, suggest they occur on average about two times every century. If this is the case, we are long overdue for one in our neck of the woods because the last supernova seen was SN 1604 observed on October 9, 1604 by Johannes Kepler. Before that a supernova occurred in the constellation Cassiopeia and was well documented by astronomer Tyco Brahe in 1572.

Are supernova explosions bad? Not if you are far away from them. Supernovae are the major source of elements in the periodic table past iron that form due to intense neutron capture. The gold in a wedding ring was probably forged in the smithy of a supernova explosion; it cannot be made by simple fusion reactions within a star.

Can a local supernova affect our planet? The answer is yes but it has been calculated it would have to be closer than 26 light years to destroy half of the Earth’s ozone layer. The most troublesome types are the dim white binary systems (just like V Sagittae) because there may be many lurking nearby that have not been detected yet. As of the present time there are no such candidates closer than about 500 light years. So far the vastness of space protects our Earth from such a catastrophe.

Plotting the timetable to the V Sagittae supernova, the research team gave an uncertainty of plus or minus 16 years — a value arising mostly from not having a perfect measure of the doubling time scale due to the large intrinsic jitter of the brightness in the historical records. They said to look for the event somewhere between 2067 and 2099.

I wish I could be around to see it.

“How many people are in the audience?” the play director asked. “About one quarter of the seats are filled.” John said, adding “If we had lowered the price from $10 to only $5 we would have filled the entire theater and made $100 more.”. Assuming this to be true, how many seats are there?

Professor Hanington's Speaking of Science: The science of Cheetos

English teachers must be happy because just this week a new noun has entered our vocabulary. Before I mention it, you may recall some of the i…

Supernova explosion in nearby galaxy