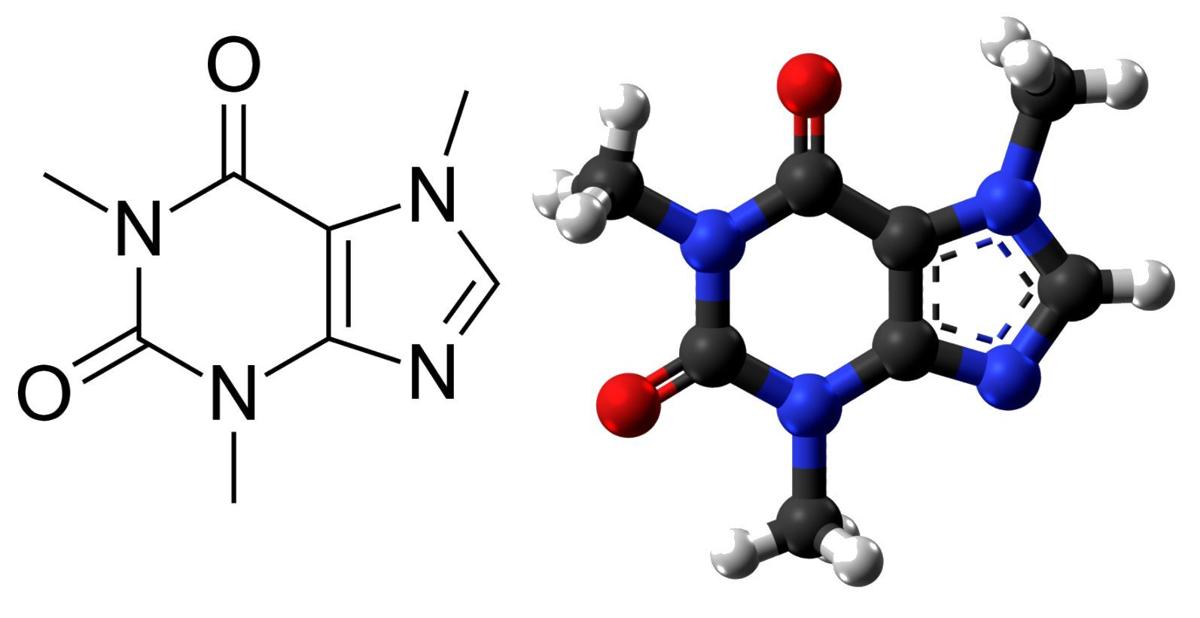 When I taught Organic Chemistry 220 at Great Basin College we would perform laboratory experiments every week, usually on Wednesday nights. It was a long three hour exercise that covered such things as melting point determination, dye making, the Tollens silver mirror procedure and polymer chemistry where we dissolved polystyrene coffee cups in xylene and used viscosity to find the molecular weight.

One of the most favorite lab experiments for students however was the extraction of pure caffeine from tea leaves. The lab was simple, always worked well, and the overall grades were usually high probably due to the fact that there was very little math involved in the subsequent report write-up.

It went like this: After brewing a cup of very strong tea we would mix in some methylene chloride, a strong solvent that is immiscible in water. Because the caffeine is more soluble in the methylene chloride, it accumulates there in a layer floating on top of the water and can be isolated using a cone shaped separatory funnel, letting the water drain out the bottom stopcock first and collecting the caffeine laden solvent next. After the solvent is evaporated under a vacuum, the tan-white crystals of pure caffeine are collected. The students tested the purity of the caffeine by observing its melting point.

Caffeine is what chemists call a plant alkaloid. All alkaloids contain nitrogen, usually taste bitter and often are physiologically active in humans. Some common compounds such as nicotine, morphine, strychnine, and cocaine are plant alkaloids. The roles these compounds play in the life of the plants in which they are found is not well understood but some alkaloids, such as the nicotine found in tobacco leaves, may act as its own plant pesticide.

Caffeine, the world’s most consumed psychoactive alkaloid, and the basis of the article today, is found in over thirty different plants species, including coffee and tea plants, the Theobroma cacao tree (from where we get chocolate), and kola nuts.

In most mammals, caffeine acts as a stimulant affecting the heart, respiration, and the central nervous system. It is also a diuretic — a substance that increases the production of urine in the body. Caffeine also helps most people who drink it to feel more alert and awake and it goes without saying that consuming too much before bedtime has been associated with symptoms of insomnia. As we all know, lack of sleep is never good for one’s health and studies reveal that sleep deprivation can impact the amount of gray matter you have in your brain.

A new analysis by researchers at the University of Basel, Switzerland, say regular caffeine consumption does not disrupt sleep quality, but it can alter the structure of the brain connected to memory. A research team led by Dr. Carolin Reichert and Professor Christian Cajochen, investigated this question in a paper published in the February issue of Cerebral Cortex — a scientific journal in the neuroscience area. The result was surprising: the caffeine consumed as part of the study did not result in poor sleep but led to changes in the quantity of gray matter — the information processing area of the brain. In their study, a group of 20 healthy young individuals, all of whom regularly drink coffee on a daily basis, were given tablets to take over two 10-day periods, and were asked not to consume any other caffeine during this time. During one study period, they received tablets with caffeine; in the other, tablets with no active ingredient (placebo). At the end of each 10-day period, the researchers examined the volume of the subjects’ gray matter by means of brain scans. They also investigated the participants’ sleep quality in the sleep laboratory by recording the electrical activity of the brain (EEG).

Data comparison revealed that the participants’ depth of sleep was equal, regardless of whether they had taken the caffeine or the placebo capsules. But they saw a significant difference in the gray matter, depending on whether the subject had received caffeine or not. After 10 days of placebo — i.e. “caffeine abstinence” — the volume of gray matter was greater than following the same period of time with caffeine capsules. According to the university website, the difference was particularly striking in the hippocampus, a region of the brain that is essential to memory consolidation. Although caffeine consumption appears to reduce the volume of gray matter, after just 10 days of coffee abstinence it had significantly regenerated in the test subjects.

According to Professor Reichert: “The changes in brain morphology seem to be temporary, but systematic comparisons between coffee drinkers and those who usually consume little or no caffeine have so far been lacking”.

Sounds like a request for more funding to me.

You have a dollar and a dime. With this, you buy a fishbowl and five goldfish from a friend.  If the bowl is a dollar more than the fish, how much are the fish each?

PennyWise Episode 5: How to Prioritize Your Debt Payments

What it's like to live on Italy's COVID-free islands

While the virus has struck far and wide, a lucky few remote locations remain coronavirus-free a year after the virus halted much of the world.

Speaking of Science: Perseverance and perception: important lessons from the search for life on Mars

On February 18th, at approximately 12:55 pm PST, the rover Perseverance touched down on the surface of Mars. Within moments, initial images of…

Pet of the Week

On the Edge of Common Sense: Mr. Washington

He’s got more towns and cities and counties and streets and states named after him than anyone else.

While consumer choice can be a good thing, not all insurance is as essential as the ads make it seem.

Is a shot of tequila actually good for you? And what's the deal with the worm? To celebrate National Tequila Day, a food historian explores some little-known aspects of the popular Mexican spirit.

Greg Kelly, a cable channel host, has been skewered online after disparaging President Biden’s dog Champ, saying he looks “from the junkyard.”

How to pick the best card games for your kids

Card games can help boost your children’s critical thinking skills while entertaining them at the same time. Here's a guide to finding the best ones.