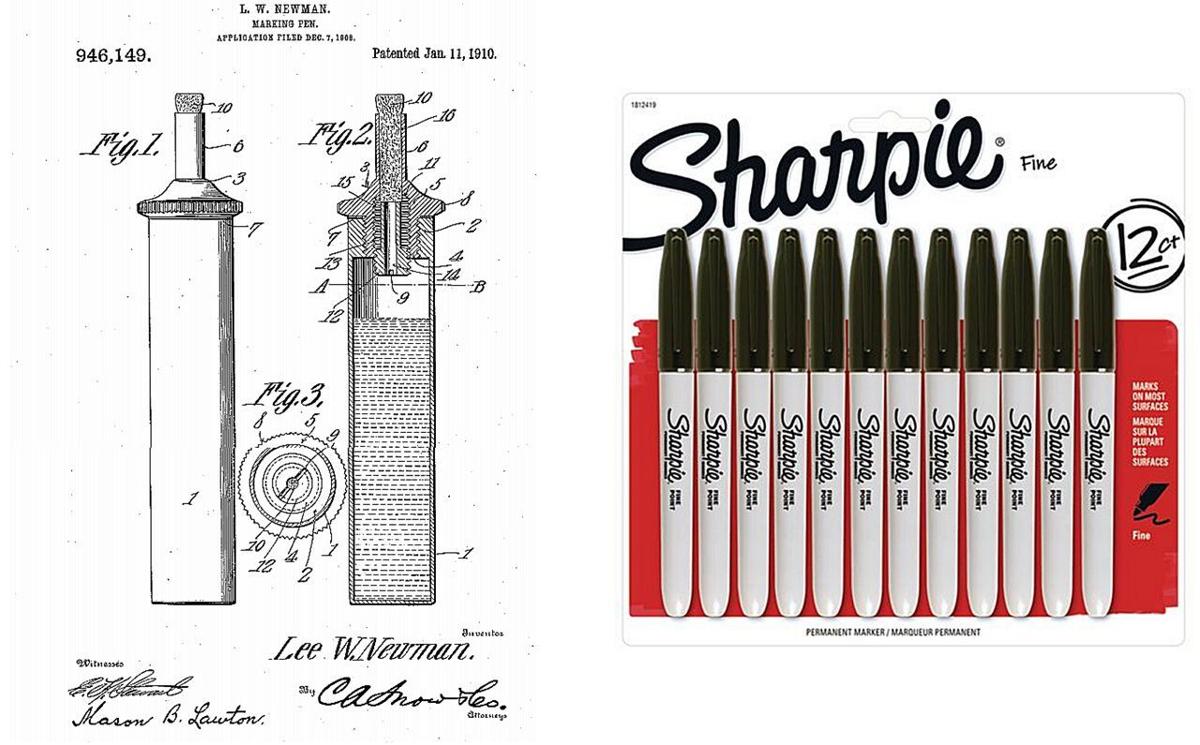 I looked all over my house for a Sharpie marker last week. I was putting in some PVC electrical conduit and needed to make a line on the pipe for cutting. Because it’s hard to see a pencil spot on the grey plastic, the bold line of a black Sharpie really stands out, especially when you are working in the dim light of a basement.

Twenty minutes later, after wasting my time going through all the kitchen drawers, I found a decades old dried up Sharpie that somewhat struggled to make a pitiful mark. I could have cut the pipe in half with the number of times I tried to draw the line darker.

If anyone wants proof that inanimate objects can actually walk away, just put a box of Sharpie markers on the counter and come back the next day. They will be gone.

Since I use so many Sharpie pens in a year, I thought I would take a look at their history and how they work.

The very first felt-tip marking pen was patented by Lee Newman in 1910. Because it was new, the design was a rather a primitive one. The patent shows a cylinder filled with liquid ink that was plugged in the end by a round piece of felt. With the ink unchecked from dripping out the nib, you could imagine what a mess the “pen” could make if not used properly.

Nevertheless, it was not successful and it took until 1926 for things to evolve in the marker-world. It was then that Benjamin Paskach of Omaha patented his “fountain paintbrush”. This was a long metal tube, almost like an aluminum drinking straw, filled with various colors of solvent based paint. The sponge tip at the end allowed the paint to flow out but it was certainly not something you could write your name with so it wasn’t a real pen.

Borrowing from the previous inventors, Rosenthal used a squat glass jar filled with more felt and some of his permanent ink. By connecting the felt pieces together and exploiting the process of capillary action, the ink flowed from inside the reservoir to the little felt-dispensing “nose” at the end. His marker could write on all kinds of surfaces, including plastic, metal, wood, cloth, and even leather.

Smelling a great opportunity, others got into the business and competition grew fierce. In 1958, Carter’s Inc. came out with a more slender marker housed in an aluminum tube that they called “Marks-A-Lot”. Angry at this interloper, Speedry sued Carter’s for patent infringement but lost on technical grounds.

Since Rosenthal’s invention required heavier paper to keep the solvent-based ink from soaking straight through to the underlying surface, others began selling pens containing water-soluble inks that could be used on normal-weight paper.

If you remember a Magic Marker, the wool wick at the end released a volatile scent reminiscent of an organic chemistry experiment. Despite its name becoming synonymous with its product, the Magic Marker Corporation continued to lose money and filed for bankruptcy in 1980. In 1989, Binney & Smith, now a subsidiary of Hallmark, purchased the rights to the Magic Marker name and now manufacturers a wide variety of these drawing pens.

What about Sharpies? As you can see, it’s good to be in the ink business if you want to go into production making marking pens and that is exactly how Sharpie got started. Way back in 1857, Frederick Redington and William Sanford, Jr. founded Sanford Manufacturing Company in Worcester, Massachusetts where they focused on producing and selling ink and glue. Wanting to expand, they moved the company to Chicago in 1866, a few years after the Civil War. In the decades that followed the company grew as a major ink manufacturer and even hired Norman Rockwell in the 1920s to create a painting for advertising use with the caption: “It’s lucky for you, child, your Gran’dad wrote this will with Sanford’s Ink!”

Quality products and strong distribution helped the company prosper, even through the Great Depression of the 1930s with the company changing its name to Sanford Ink during WWII. Seeing the success of Magic Markers, Sanford designed and produced the first Sharpie pen in 1964. This black marker became the first permanent marker that was easy to hold and write with. Just like a Magic Marker it wrote on almost any surface from glass, wood and stone, to plastic, metal and, of course, paper but was designed as a pen instead of an ink dispenser. NBC talk show host Johnny Carson officially gave the first celebrity endorsement of the instrument.

Until the early 1990s, the most common solvents that were used for the ink were toluene and xylene. Since these two substances are both harmful and characterized by a very strong smell they have been replaced with a safer alcohol-based ink. The Sharpie website says that as of 2002, it was calculated there were over 200 million Sharpies in the United States or approximately two for every American household.

Somebody, somewhere must have my two.

In 1895 Lord Howard Hertz was told that the elm tree in his neighbor’s yard was the tallest in England. Grabbing his father’s sextant he measured the angle to the top from horizontal as 26.794 degrees. Stepping back ten feet the angle dropped to 25.685 degrees. If we assume the sextant was used six feet above a flat ground, how high is the tree?

ELKO -- You don't need to look twice to spot a skeleton in this yard.

Pets of the Week

Are you washing your bedding often enough? Here's a cheat sheet for sheets

Here’s what experts have to say about washing bedding during the coronavirus pandemic.

The most expensive zip code in every state

Despite widespread economic declines brought on by the COVID-19 pandemic, the real estate market has remained surprisingly strong, with record-setting increases in existing home sales in every region of the United States.

As coronavirus surges across the US, only 2 states are trending in the right direction

There is nearly no place in America where Covid-19 case counts are trending in the right direction as the country heads into what health experts say will be the most challenging months of the pandemic so far.

US to sue Google in landmark antitrust case