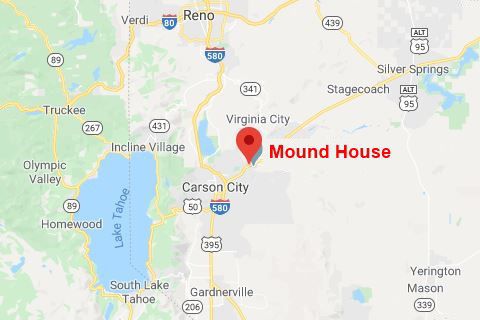 In the days when the Virginia and Truckee Railroad traveled between Virginia City and Carson City, there was one important station along the way known as Mound House.

Located about halfway between the two cities, Mound House was also the terminus point for the narrow-gauge Carson and Colorado Railroad. The Mound House Station was quite substantial, having numerous warehouses, loading and unloading areas, and an extensive train yard. It was situated just north of present U.S. Highway 50 and east of Redrock Road.

The railroad yard at Mound House was abandoned in 1939. The tracks were taken up and the buildings gradually disappeared. By the 1980s, commercial development completely covered the site. The shop and equipment yard for my family business, Cassinelli Landscaping and Construction, were once located on the site of the former Mound House Station. The business has now relocated to Dayton.

The Mound House area is one of Nevada’s most famous ranching districts, being located near the Moonlite Bunny Ranch, Sagebrush Ranch, Kit Kat Ranch and Bunny Ranch II. All of these beautiful ranches were visible from the windows of our offices.

Due to the extensive commercial development that has occurred in recent years, the rebuilt Virginia and Truckee Railroad is not routed where the original Mound House station once stood.

The new route is about a half mile west of the original site near where the Lyon County/Carson City line crosses U.S. Highway 50.

Being an amateur archaeologist, I have searched the area extensively looking for some remnants of the old Mound House Station. The area is so changed, there are just two things that mark the site today. One of these is a historical marker on the north side of U.S. Highway 50. The other thing is a marked grave Just across the driveway from our former office. There is a gnarled old pinion tree that has died and beneath the tree lies a grave surrounded by an ancient wooden picket fence. The fence was so old and fallen down that someone had enclosed the gravesite with a modern chain-link fence. A weathered wooden grave marker, though illegible, leans precariously against the pinion tree.

Fortunately, the person buried there shall not be forgotten. Years ago, someone used an old Highway Department marker to create a memorial of sorts to the person buried in the grave. Painted on the marker by hand is the following inscription:

“This marks the site of the Mound House Halfway station between Carson City and Virginia City, named after the grave of Maria A. Kennie Mclain, 1835–1871.”

A few years ago, I told the historian at the Nevada State Railroad Museum about the grave. She was able to locate some descendants of Ms. Mclain. The relatives lived out-of-state, so we took pictures of the gravesite to send to them.

My crew and I respectfully tended to the grave, and on dry years we used to drag a hose out and give the gnarled old pinion tree a drink. Hopefully, those who follow us will continue to preserve and protect this one last remnant of the original railroad station at Mound House.

Speaking of Science: Can herd-immunity protect us from Covid-19?

As I write this, Covid-19 cases continue to rise at record rates throughout the United States. Interestingly, I’ve seen many people arguing th…

Governor of Florida says if Walmart can open, so can schools

Governor of Florida says if Walmart can open, so can schools