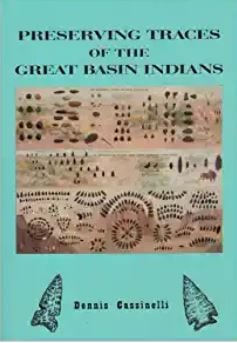 I want to thank all my readers who recently bought my book, “Preserving Traces of the Great Basin Indians.” These have been offered at $ 10 each and I will pay the postage.

The book is devoted to enabling people interested in American Indian artifacts to identify and date the many types of projectile points, beads, knives, pendants, scrapers and other stone artifacts that have been found in the Great Basin.

It is fully illustrated with drawings and photographs of hundreds of artifacts. The book is based on a collection of Indian artifacts I have donated to the Douglas County Museum in Gardnerville. It is on permanent display at the museum for all to see and enjoy.

Chapter 11 of “Preserving Traces” is a fictional prehistoric short story illustrating the difficulties involved in the seemingly simple task of making arrows. One of the most often asked questions I receive from people is: “How did the Indians make their arrows?”

Often the discussions concentrate on how the ancient people were able to make such beautiful chipped stone projectile points and tools with the limited resources available to them. The discussions dwell on how wooden arrow shafts were made, or how arrow points and feathers were attached to the shafts.

My idea for “Making Arrows” came from a special place south of Boomtown near Verdi, where I discovered a high mountain meadow while hunting blue grouse several years ago. A large pine tree had recently blown over and as I passed by the exposed roots of the huge tree, I saw some arrow points in the soil around the roots of the uprooted tree. I then realized the meadow had been the campsite of a group of American Indians hundreds or even thousands of years ago.

Think for a moment just how resourceful the people had to be in prehistoric times in order to make the objects or tools they needed for survival from only the things they could find in their natural environment. There were no pocket knives, hardware stores, supermarkets or any of the things we take for granted today.

I have hunted with the bow and arrow and I even tried my hand at flintknapping my own arrow points. Having crafted my own stone knives, and weapons from wood, feathers and stone, I have developed an appreciation for what it takes to manufacture simple prehistoric weapons.

Imagine walking out into the woods or the Nevada desert and attempting to make some hunting weapons without so much as a pocket knife in your possession. Today, we take for granted the ease of shopping for any conceivable item or gadget to make life easier for ourselves. Hunters today would be lost were it not for places like Scheels, Sportsman’s Warehouse or Cabela’s where they could buy whatever they needed to hunt or fish.

In the days of the Great Basin Indians, the people made everything they ate, used, smoked or wore from things they found in their natural environment. Some simple trading occurred, but most things people had, they made for themselves.

In my story about making arrows, I let a couple of young men from ancient western Nevada tell just how difficult it was in those days to perform the simple task of making arrows. The story takes place along the Truckee River Canyon at a place where I have hunted before and I know it was the site of an old summer hunting encampment. I know this from traces of items the Indians had left there for me to find.

I hope you will enjoy the humor, tragedy and the sobering experience of this prehistoric short story in Chapter 11 of “Preserving Traces of the Great Basin Indians.”

Around the year 1860, there was a series of events that shaped the history of Nevada for decades to follow.

Stories of Old Nevada: The California Trail through Nevada

I recently received an email from 91 year old Harold Harvell concerning an earlier article I wrote about the Operation Haylift of 1948-1949. M…

About 10 miles southeast of Fallon, on US Highway 50, there is a place known as the Grimes Point Archaeological Area. Over the last 10,000-21,…

Having visited many of Nevada’s State Parks, I want to share with my readers information about some of them. People often wonder where to visi…

It has been more than 60 years since I took my first hunting trip into the vast desert country of northwestern Nevada. This is the area of nor…