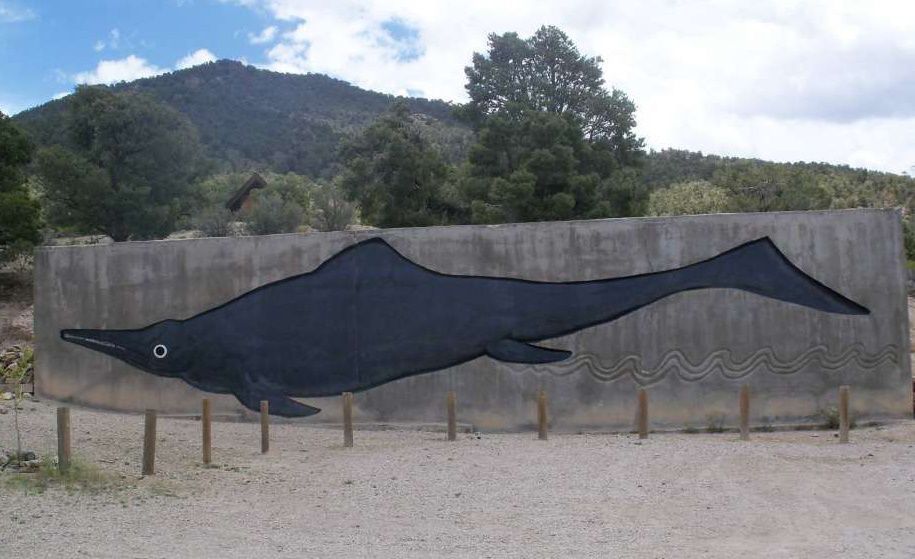 Having visited many of Nevada’s State Parks, I want to share with my readers information about some of them. People often wonder where to visit that would be fun and interesting for the whole family to see. One of these is the Berlin Ichthyosaur State Park near the geographic center of Nevada.

The park contains the ghost town of Berlin, built in the 1890s, that is preserved in a state of arrested decay. A true Nevada ghost town, many of Berlin’s original buildings, including the old mill, remain and some of the original residents are interred in the town’s cemetery. Trails throughout the townsite tell the story of Berlin, the mill and its mine. Another ghost town nearby is Ione, Nevada.

The main attraction of the park is the abundant concentration and the largest known remains of ichthyosaurs, an ancient marine reptile that swam in a warm ocean that covered central Nevada 225 million years ago. The actual fossils are displayed at the park’s covered fossil house.

The fossils displayed in the park’s fossil house are a concentration of several fossilized skeletons in a huge pile indicating that there was a catastrophic event 225 million years ago that caused the death of so many of these huge fish-like reptiles. The ancient marine fossils at the park give a new meaning to the saying “The ocean someday may a desert be.” This is amazing considering that today the park lies at an elevation of 7,000 feet. Just try to imagine the dramatic geologic events that caused this to happen.

The park has 14 well spaced camping units for RVs, fire pits, barbecue grills, drinking water and restrooms. There is an RV dump station and camping is limited to 14 days. The park has a day use picnic area with tables, grills and restrooms.

I want to thank all my readers who recently bought my book, “Preserving Traces of the Great Basin Indians.” These have been offered at $ 10 ea…

Dr. Birx: Masks can be a fashion statement

Dr. Birx: Masks can be a fashion statement