Become a Member
Read Today's E-edition
Share This
Stories of Old Nevada: The California Trail through Nevada
0 comments
Share this
1 of 2 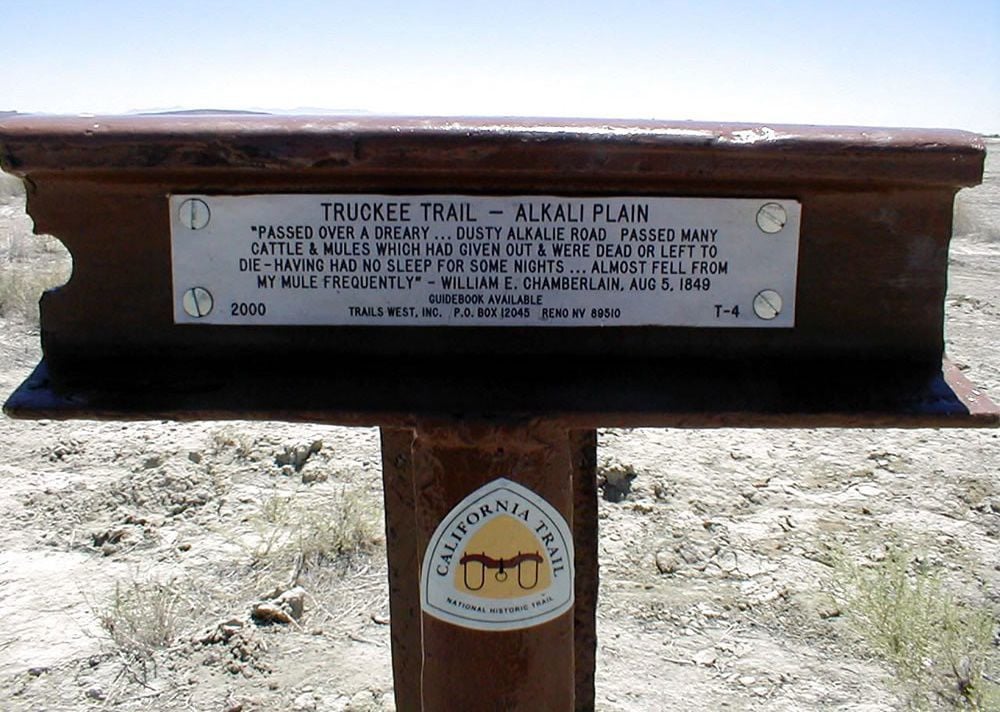 In the early days, Nevada was referred to as The Great American Desert. The pioneers who attempted to cross this area knew, or should have known, that any route selected must follow the route of the rivers in order to have water for people, horses, oxen and other livestock. It was also essential to have places where these animals could graze. The Donner party chose to take the Hastings Cutoff, which likely delayed them and caused their late attempt to cross over the Sierras.

The Humboldt River route was the most used route across northern Nevada and it provided water and grazing all the way to Lovelock. When the wagon trains reached Lovelock, the emigrants were faced with having to make another choice for the best way to cross the dreaded Forty Mile Desert. Just beyond Lovelock, the Humboldt River entered the Humboldt sink and disappeared into the sand. The pioneers complained the water of the Humboldt became increasingly alkaline each day.

Many of the wagon trains chose to take the Carson River Route, traveling southerly from Lovelock. Once they left the Humboldt Sink, it was 40 miles without any water until they arrived at the Carson River at Ragtown. After leaving Ragtown, the wagons followed the Carson River west to the area where Fort Churchill was later built. From there, the trail passed through Dayton and Carson Valley where various routes, including Spooner Summit and Kingsbury Grade, were then used to cross over the Sierra Nevada Mountains to California.

Those who decided to take the Truckee River Route traveled southwest from Lovelock 20 miles to Brady’s Hotsprings where 200-degree water was available. It had to be cooled before livestock or people could use it. When some emigrants arrived, their oxen smelled water and were scalded attempting to drink.

From Brady’s it was another 20 miles to the next water at the Truckee River near Wadsworth. Following the Truckee west they then reached the Truckee Meadows. Since the meadows were mostly a large marsh in those days, the wagons traveled south to near Rattlesnake Mountain where there was a spring that became known as Donner Springs. Here the emigrants and livestock rested for the final effort to cross over the Sierra Nevada Mountains to California.

The Truckee River Canyon was seldom used and, like the Donner Party, emigrants went north from Verdi and then southerly again to the Donner encampments at Alder Creek and Donner Lake.

It would take more than a single article to describe the many other alternative routes that were used by the emigrants to reach California. It is interesting to note that many of the most used trails are now marked with durable steel “T” shaped markers. Just west of Elko there is the California Trail Interpretive Center where visitors can see exhibits that tell more about the trails west.

Many emigrants started out ill-prepared for the 2,000 mile journey ahead of them after leaving Missouri. Some took way too many personal belongings with them and later had to abandon things along the trail. The routes often became lined with graves, pianos, excess furniture and the bones of oxen and other livestock that did not survive the journey.

It is estimated that about 250,000 emigrants used the various branches of the California Trail. About 93 percent of them made it to their destinations in California. Most of the people walked the entire route they had chosen.

I want to thank all my readers who recently bought my book, “Preserving Traces of the Great Basin Indians.” These have been offered at $ 10 ea…

ELKO — The California Trail Interpretive Center is reopening Thursday after being closed for more than 15 months because of the coronavirus pandemic.

Reasons you should consider a retirement coach

Reasons you should consider a retirement coach

Diabetes warning: The 'irreversible' signs you can spot in your mouth

Diabetes warning: The 'irreversible' signs you can spot in your mouth