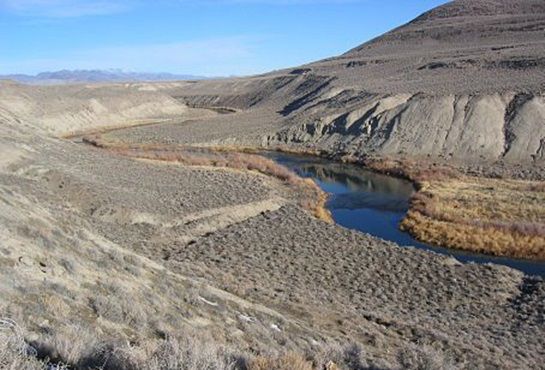 In a previous article, I told about the raid and destruction of Williams Station along the Carson River by a band of renegade Paiute Indians from the Pyramid Lake Indian Reservation on May 6th, 1860. The Comstock Lode had just recently been discovered and the hundreds of people pouring into the area to participate in Nevada’s new silver rush were terrified of the thought of a hostile Indian presence so near.

Once word of the attack reached Dayton, Silver City, Gold Hill and Virginia City, a major panic set in among the white population. Each community assembled a group of inexperienced volunteers to mount a swift retaliation for the massacre. They were poorly armed and ill-equipped to mount any successful campaign against the much larger army of Paiute, Shoshone and Bannock Indians numbering over 700 warriors assembled at Pyramid Lake.

On May 9th, 1860, the Comstock Volunteers led by Major William Ormsby of Carson City, Thomas F. Condon Jr. of Genoa, Richard Watkins of Silver City and Archie McDonald of Virginia City set out on their campaign against the hostile Indians. Very few of the members had any military experience and there was no clear chain of command or commanding officer.

On May 10 the group arrived at Williams Station and buried three of the victims of the recent massacre. After seeing first hand the gruesome seriousness of the situation, a vote was taken to determine whether to pursue the enemy or return home. All members agreed to continue the campaign.

On May 11, the small army arrived at the Truckee River where Wadsworth is now located. At a log cabin on the bank of the river they found five survivors of an earlier attack by the Paiutes. The Indians had claimed the men were hunting on tribal land. Three of their companions had been killed in the attack and the remaining five had found refuge and been besieged in the log cabin. These five joined forces with the volunteers from the Comstock, bringing the total number to 105.

On May 12th, the untrained militia continued on toward Pyramid Lake in an ill advised effort to retaliate for the Williams Station incident. The trail followed the Truckee River north to where the Indians were known to be holding a council to determine a course of action for grievances they had against the white settlers ravaging tribal lands.

As the militia approached Pyramid Lake, the trail entered a long, narrow gorge where the Truckee River flowed between increasingly widening steep slopes and cliffs on either side. Further on, it formed a long meadow with a forest of Fremont Cottonwoods and other vegetation lining the river. As the whites passed into this lowland, for about one and one half miles, they noticed a band of about one hundred Indians up on the rim of the narrow canyon ahead and to the right of them.

Major Ormsby sensed there was a battle eminent and gave the command for the group to stop and cinch up their saddles. The Indians were still out of gunshot range, but one of the group, A.K. Elliot, took several shots at them with a long range globe-sighted rifle with no apparent success. The company mounted up and someone gave the order to charge up a narrow wash just east of the assembled line of Indian warriors and mount an attack. About thirty of the group dashed up the wash in pursuit of the enemy. When they reached the top of the plateau where the Indians had been spotted, they found no one in sight. It was as if the savages had melted from view.

Confused and disoriented, the militia saw another line of mounted Indians ahead of them just out of rifle range. By that time the group realized they had made a grave mistake. Whether by design or accident, they found they had been lured into a trap from which there was no escape. As the mounted Indians ahead of them approached, suddenly there appeared from every sagebrush and rock around the militiamen a swarm of enemy combatants.

Instantly, the air was filled with bullets and the hissing sound of arrows. The whoops of the warriors and the screams of the terrified whites signaled the battle was hopelessly lost. Those not killed outright tried desperately to calm frightened horses and make a quick retreat back down the wash to the cover of the vegetation along the river. The seventy or more members of the militia who had remained behind, seeing what was happening on the ridge above, made a quick retreat toward the river and toward the southwest.

The escapees soon learned there was not to be an easy retreat. Chiquito Winnemucca and a sizable band of followers were soon joined by Numaga and his band to stop many of the whites from escaping the battlefield alive. Numaga briefly attempted to stand between the Winnemucca group and the whites to obtain a parley. Winnemucca and his yelling hoard ignored the request and pressed on, determined to kill as many of the whites as possible before they escaped toward the south.

Occasionally, a few of the retreating whites formed again to make a stand against the advancing Indians. One member stood out as exceptionally valiant and was called by the Indians the “White Brave.” This was William Headly, who despite his valor was ultimately killed. One by one, the retreating militiamen were slain as they dashed through the sagebrush and among the cottonwoods lining the river. A last stand of sorts was made where the trail rose up a steep bank exiting the meadows. The retreat became a wild, panic-stricken stampede.

The pursuing Indians soon learned it was much easier to kill the horses of the escapees than attack the men who no longer had a means to escape. The individual stories of each of the escaping militiamen killed that day were too numerous and tragic to tell with any detail in this article. The death of Major Ormsby is probably typical of many of those who lost their lives that day.

In his attempt to escape the hoard of Indians driving the whites from the narrow valley, Major Ormsby was riding a mule that had been shot through the flank and spurted blood with every step. The major had been shot in the mouth and wounded in both arms, yet he rode on. Others of the group wanted to rally another attack, but the major warned they should do what they could to save themselves.

As Ormsby was half way up the steep grade leaving the narrow valley, his saddle turned and threw him to the ground. The major then walked to the top of the grade and turned around to face his pursuers. He recognized some who he had met before and desperately tried to seek mercy from them based on the past friendship he had with them. This proved of no use and he was killed with arrows to the stomach and in the face.

The remaining escapees continued on toward where Wadsworth now stands until it became too dark for the Indians to see them any longer. In all, there were 76 militiamen killed that day in the most disastrous conflict to the whites in what is now the State of Nevada. Most of the survivors were wounded but the Indians suffered no loss of life and just a few wounded braves.

In my next article, I will relate the story of the Second Battle of Pyramid Lake which had a much different outcome from that just described.

“Preserving Traces of the Great Basin Indians” has always been my best selling publication. This book is the story of the Cassinelli/Perino ar…

A few years ago, I attended a program by Eugene Hattori at the Nevada State Museum about the incredibly old petroglyphs that were carved into …

If it’s outdoor recreation you are after, Dayton State Park is a great place to set up a campsite, fish from the Carson River, or enjoy a barb…

Several times in the past, I have written stories about my family when they owned a ranch across the Carson River from Dayton. My Great Grandf…

Stories of Old Nevada: Desert reclaims the town of Aurora

During the summer of 2012, I had the pleasure of working as a paving and concrete inspector in Hawthorne, Nevada, and along the shores of Walk…