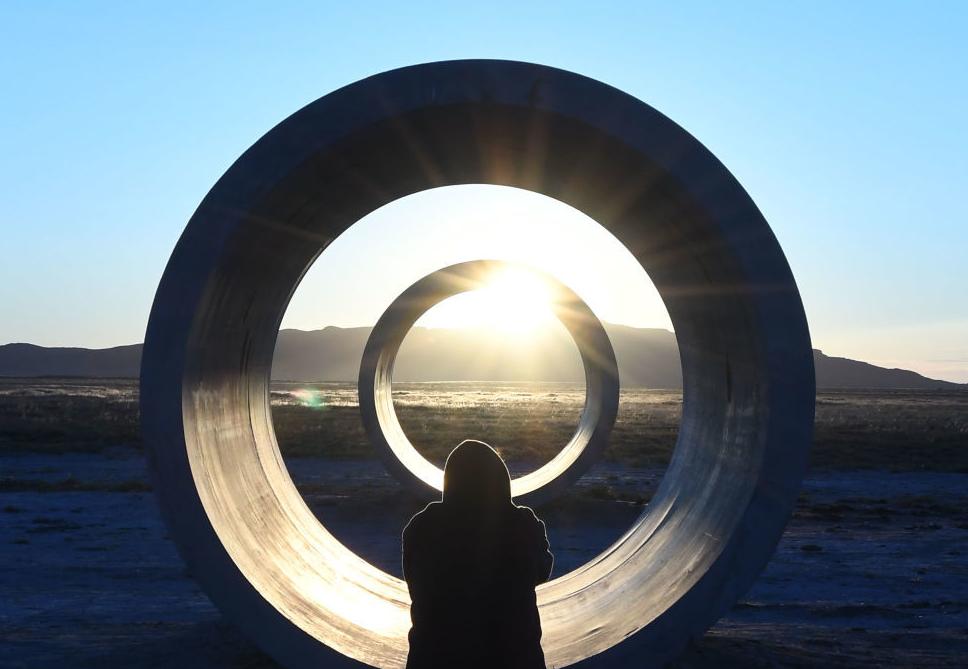 This story came out of a personnel journey I have been wanting to make for many years. Artist Nancy Holt completed this art installation in 1976. The "tunnels" consist of 22 tons of concrete aligned with the summer and winter solstices. Watching the sun rise through the tunnels was a mesmerizing experience for me. I hope my readers enjoyed seeing it through my eyes. 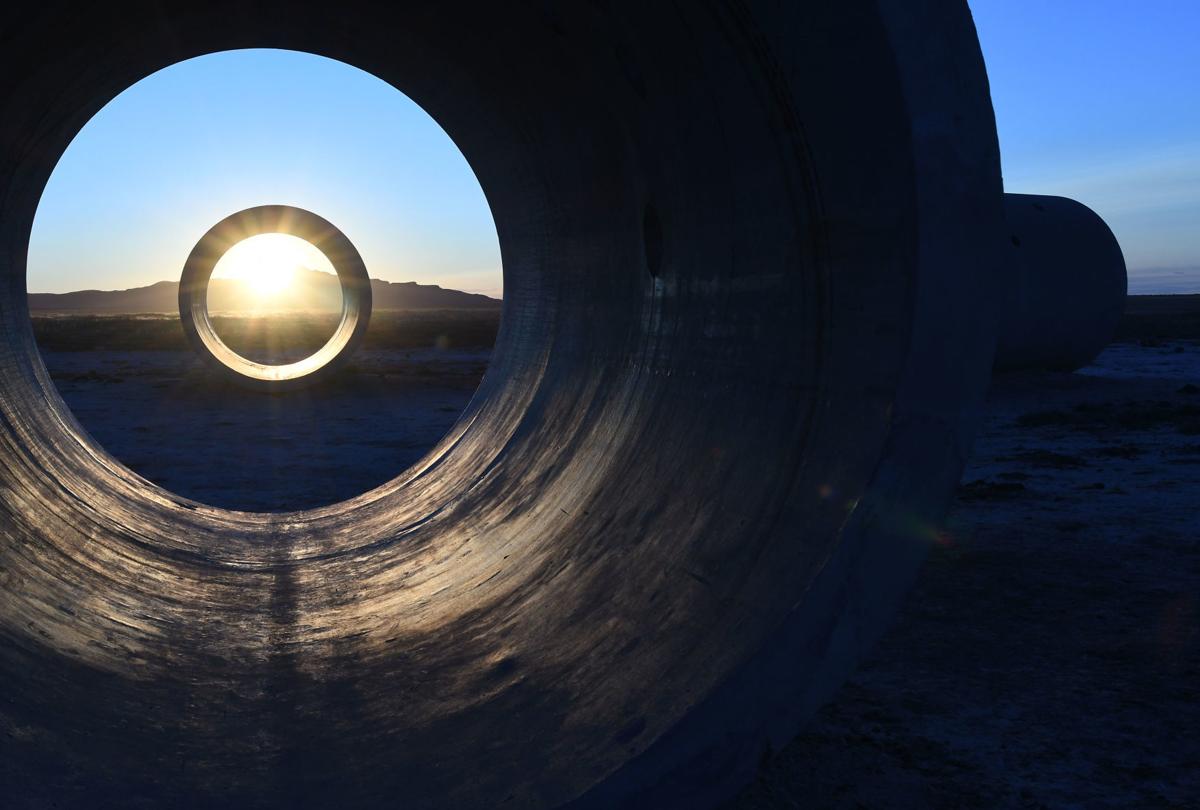 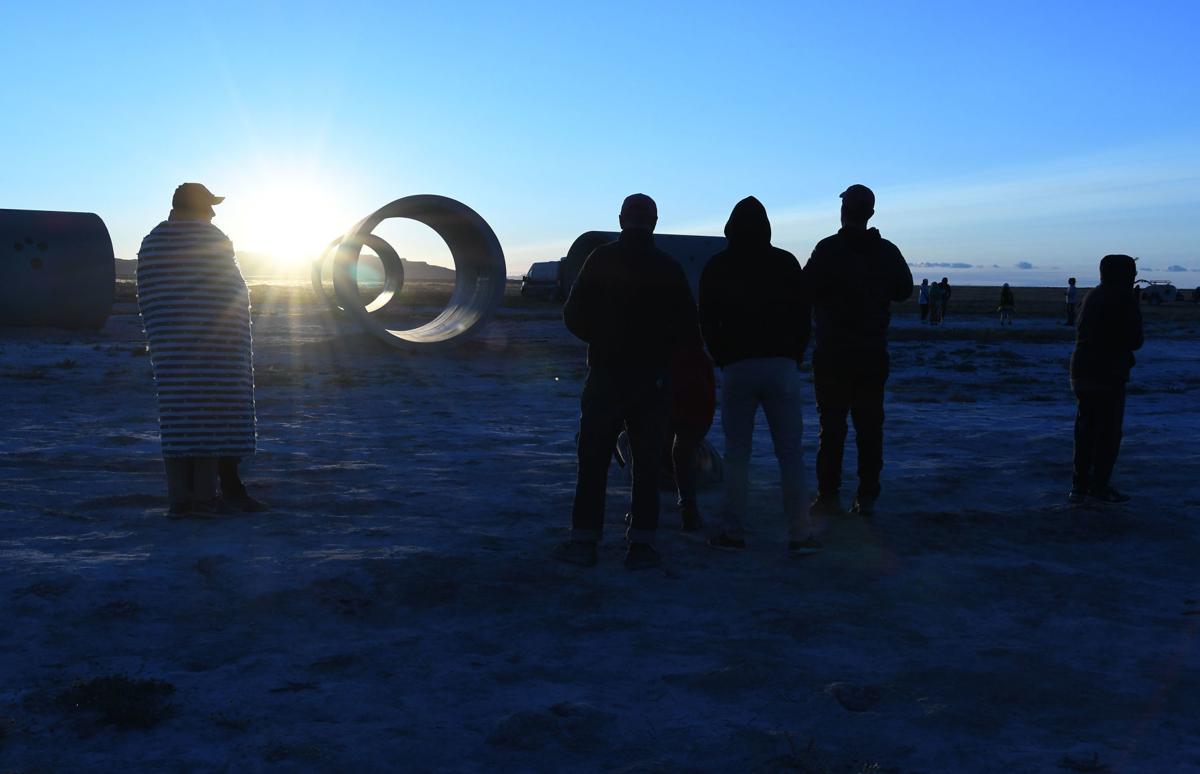 A small crowd gathers in front of the "Sun Tunnels" on June 21. 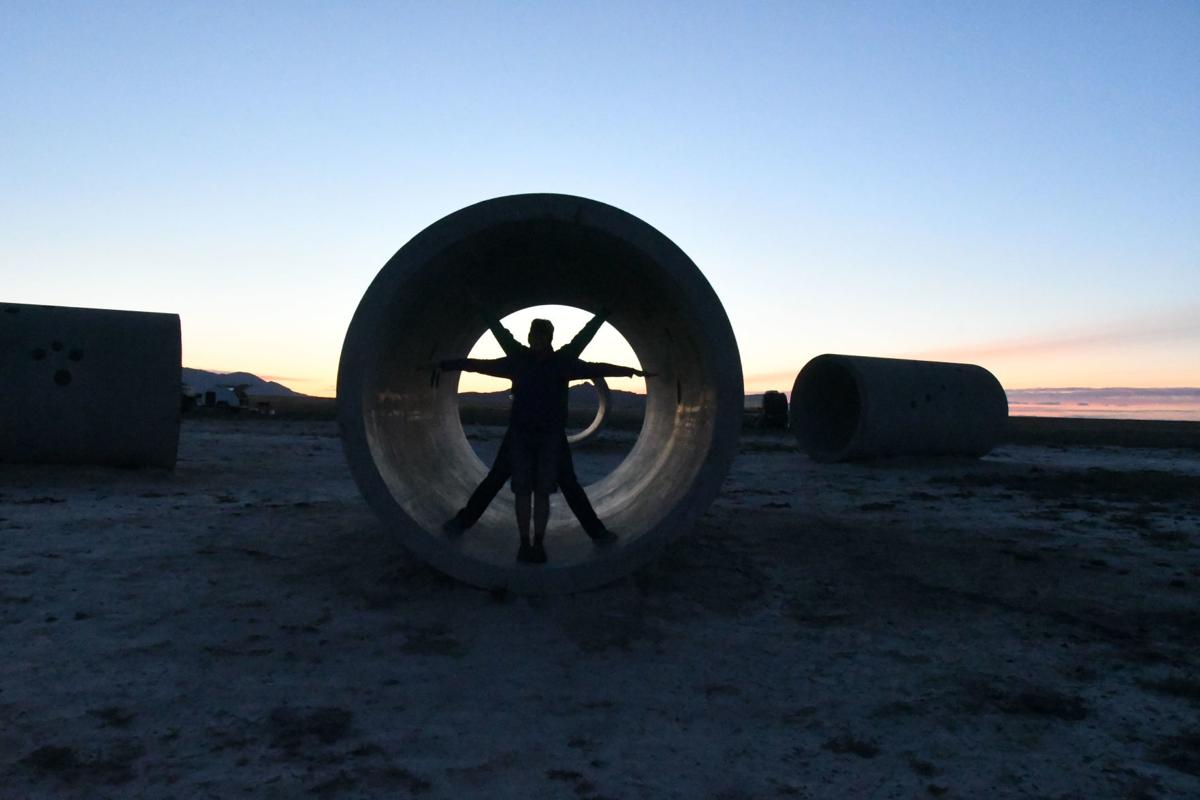 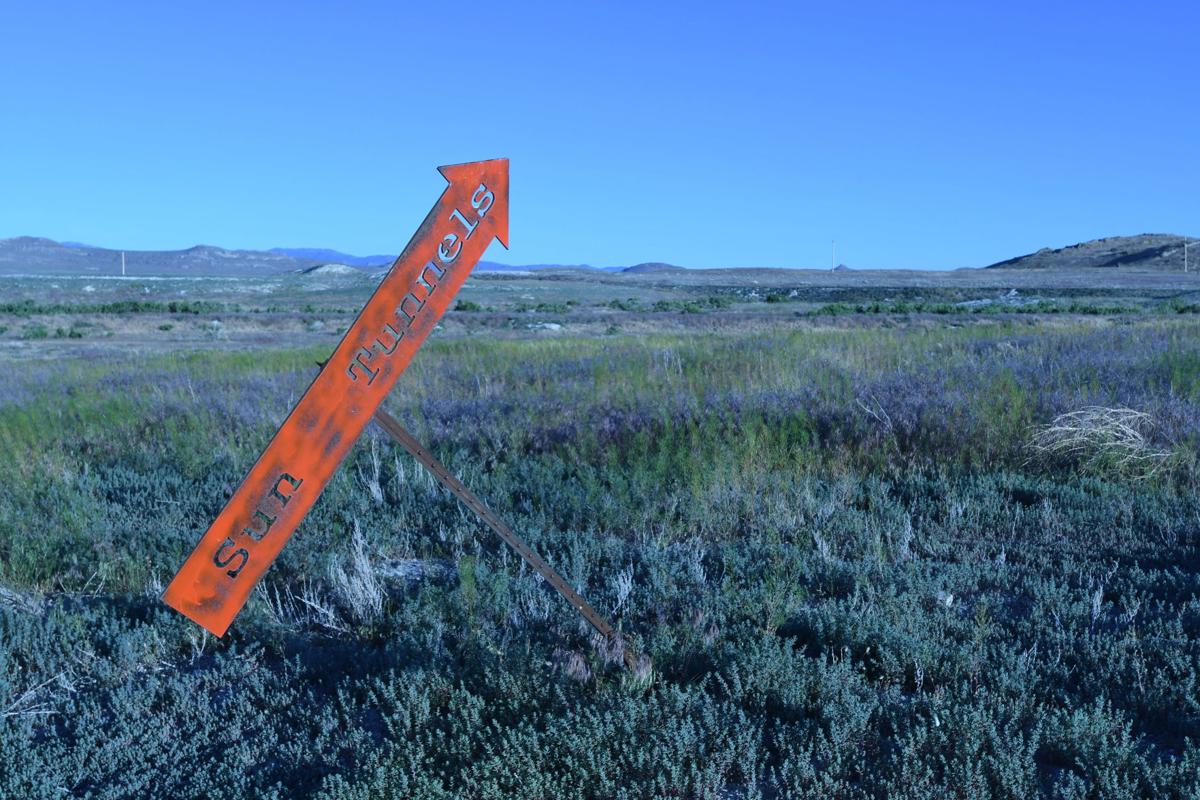 A back-country sign for the "Sun Tunnels" mysteriously points to the sky. 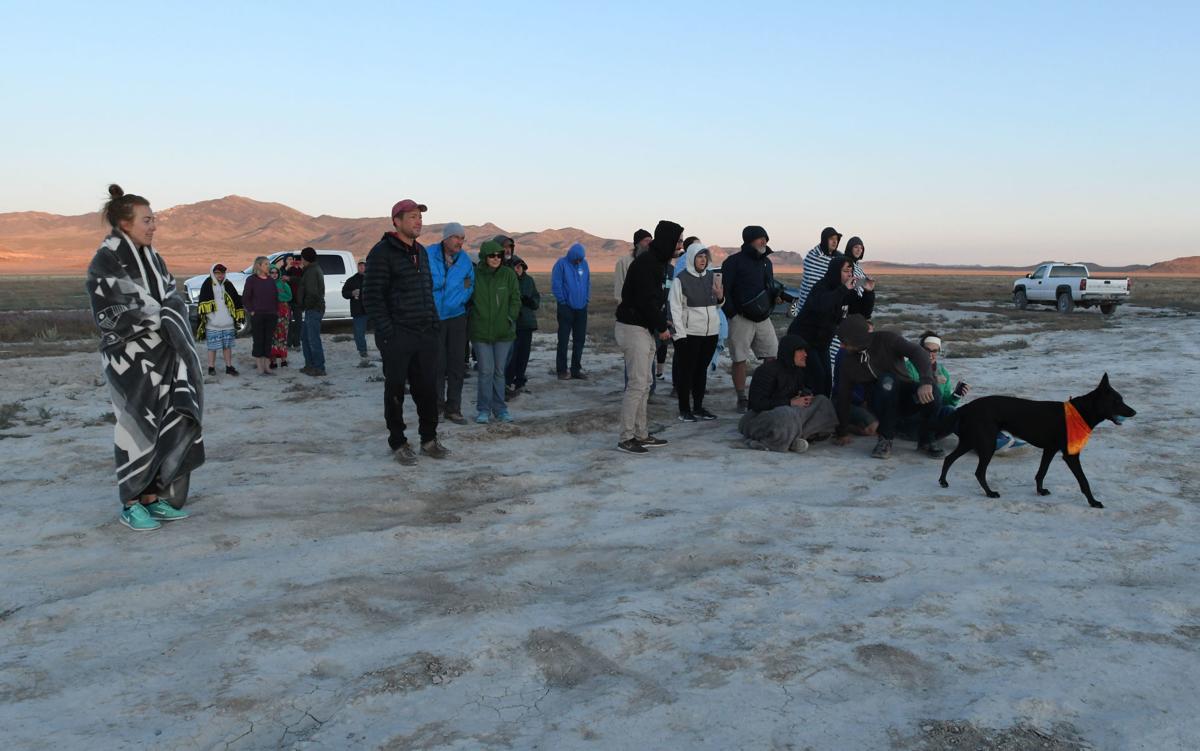 People gather around to watch the sun rise through the tunnels.

ELKO – The sun rose above a low mountain, its rays piercing the land. Light beamed directly into two large, concrete tunnels, blindingly bright. It was the first day of summer, the summer solstice.

A small group of sturdy individuals clustered in front of the tunnels watching the same view that thousands of people have come to the desert to see since the late 1970s: Nancy Holt’s land art installation west of Utah’s Bonneville Salt Flats.

Holt was married to Robert Smithson, who created “The Spiral Jetty,” a giant earthen formation that reaches out of the northeastern peninsula of the Great Salt Lake. Smithson’s work often overshadowed his wife’s. Smithson died in his 30s in a plane crash while surveying sites for his art forms. After his death, Holt kept working and gained a notoriety she had never before experienced.

Holt was fascinated with the desert and she searched for a piece of property where she could build her installation, “Sun Tunnels.” She purchased land in Utah near the Nevada border.

From 1973-76 Holt worked on her masterpiece with the help of engineers, astrologists, contractors and crane operators. Four 18-by-9 feet tunnels were placed in an open cross formation. Their openings orient with the sunrise during the summer and winter solstices.

Smaller holes in each tunnel represent the Draco, Perseus, Columba and Capricorn constellations. The tubes serve as viewfinders that, in Holt’s words, “bring the vast space of the desert back to human scale.”

Arising at midnight is not my normal routine. But, this red-eye activity was necessary for my friends and I to drive from Elko to the Sun Tunnels before dawn. It was 35 degrees outside when the three of us flung ourselves into a car and, with vague internet directions, headed to the remote site.

After reaching Montello things got dicey. There are no “real” destination markers for the Sun Tunnels. We missed our turn onto a dirt road because the sign for Lucin — a Utah ghost town — was scratched and illegible in the pitch-black darkness. We realized we were off course after about eight miles and turned around.

Somehow we managed to find our way off the paved road, headed in the right direction. We thought we were right on course, but after we crossed the railroad tracks things “went south” again. We overshot our turn and wound up on a path overgrown with brush. We backtracked until finally we saw a light in the distance. A right turn on a side road and, voila, we were there.

The tunnels loomed before us. Light barely graced the surface of the earth and we could see a number of vehicles and campsites. Apparently, we were not the only ones seeking adventure and a solstice surprise.

“I have read about this for the last 20 years,” said Richard Malatesta, a biology teacher from Salt Lake City. “It’s always been on my life list to see it. I’ve done a bit of research on the site.”

Malatesta had arrived the day before and camped out, an activity, in hindsight, I now recommend.

Unless you venture out every day you tend to forget how nippy it is at 4 a.m. in the northern Great Basin, even on the first day of summer. People wandered from their tents and campers donned in parkas, blankets and thick hoodies.

“The Sun Tunnels are remarkable for being one of the only human scale objects that you can see for miles around,” said Lee Butterman from San Francisco. “The mountains are enormous and beautiful but the tunnels are roughly one and a half times human scale and people interact with them and stand in them and dance around.”

Butterman described himself as a “general art enthusiast.” This was his third visit to the Sun Tunnels. He said he had even been there in winter when the wind was howling. I admired him.

While completing the work, Holt documented the process and produced a film of the same name.

“The workers seemed to care about the work they were doing for me,” she wrote in a notebook. “The filming in both 16mm and still photography gave them an increased consciousness of their acts.”

The light increased in intensity and people packed closely together with their cameras and cellphones. Everyone was waiting for the instant the sun would reach over the mountain. The mood was palpable.

One of the visitors played “Here Comes the Sun” by The Beatles. It was the right thing to do.

And then, the sun came up, as it always does. But, framed by the long tube, it seemed majestic and almost within reach. The sun was the sole entity that 35 people on a dusty patch of land eyed with awe.

It was as Holt intended.

Lower your cholesterol by eating these foods

Lower your cholesterol by eating these foods

These everyday items are about to get more expensive

These everyday items are about to get more expensive

You should buy these items at yard sales

You should buy these items at yard sales

This story came out of a personnel journey I have been wanting to make for many years. Artist Nancy Holt completed this art installation in 1976. The "tunnels" consist of 22 tons of concrete aligned with the summer and winter solstices. Watching the sun rise through the tunnels was a mesmerizing experience for me. I hope my readers enjoyed seeing it through my eyes.

A small crowd gathers in front of the "Sun Tunnels" on June 21.

A back-country sign for the "Sun Tunnels" mysteriously points to the sky.

People gather around to watch the sun rise through the tunnels.