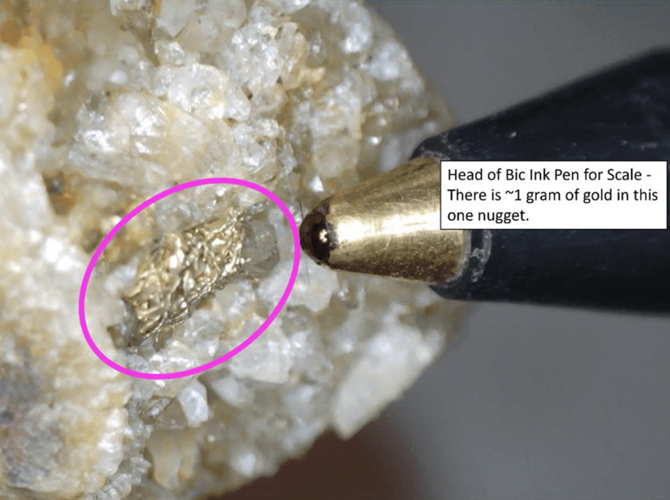 Gold nuggets have been found during American Pacific Mining’s exploration of the Modoc North Target area at the Tuscarora Project. 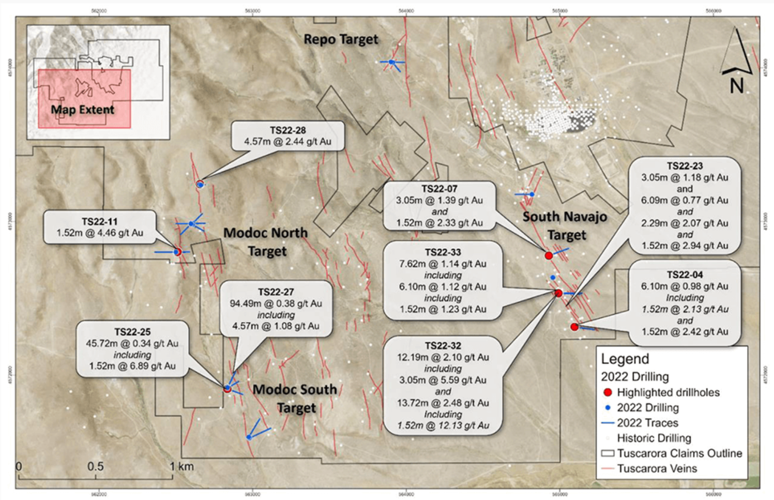 VANCOUVER, B.C. — American Pacific Mining Corp. has provided a project update and assay results from its Tuscarora Project in Elko County. The project is about 30 miles northwest of Elko and 12 miles southwest of the Jerritt Canyon Mine.

American Pacific optioned the Tuscarora Project from Novo Resources Corp. in November 2017 and became the 100% owner in February 2021. American Pacific has grown the size of the property since then. It now consists of 268 claims covering approximately 5,370 acres.

American Pacific has completed 33 shallow reverse circulation drill holes at Tuscarora for a total of 18,094 feet across several different target areas. The company said drilling at the South Navajo area defined a potential third gold zone below known mineralization, and drilling and sampling along the Modoc Vein swarm has highlighted the potential for a new gold-bearing sulfide system in an area that has very limited historical drilling.

“Defining a third gold zone at South Navajo and drilling into a new gold-bearing sulfide system at Modoc are both very encouraging developments from our modest drill program at Tuscarora,” said American Pacific President Eric Saderholm. “The relatively shallow sulfide mineralization at Modoc is particularly intriguing, as this area has very limited historical drilling and represents a new target type that we will pursue in subsequent drill campaigns.”

“The Valmy-aged rocks are the capping units above the stronger mineralization along both the Carlin Trend and the nearby Jerritt Canyon deposits,” American Pacific’s report said. “Below these ‘upper plate’ formations lay the favorable ‘lower plate’ carbonate-rich units, including the Rodeo Creek, Roberts Mountains, Popovic and Hanson Creek Formations. These regionally well-known formations host the bulk of the ore mineralization along these prolific trends and account for approximately 100 million ounces of historically mined and current gold reserves.

“The age of the Tuscarora volcanic rocks and mineralization is approximately 40 million years, making it roughly synchronous with the Carlin and Jerritt Canyon mineralization ages. The Mt. Blitzen caldera is the known source gold and silver mineralization at Tuscarora, and the contact of this strong metal system with the deeper ‘lower plate’ rocks provides for a very intriguing target.

“An entirely new, and unexpected, Carlin-style mineralization potential has emerged from this drilling campaign and a future, deeper drilling program is justified to test these newly emerging target concepts.”

“Tuscarora was historically a placer mining district, and the presence of visible and coarse free gold has been documented historically and recognized again by American Pacific during its recent exploration work in the district,” the company’s report said. “This ‘nugget-effect’ at projects like Tuscarora, that can contain valuable large gold particles, or ‘nuggets,’ can result in concentrations of gold that are challenging to accurately represent with traditional assay techniques.

“Based on visual observations in the field during the Tuscarora drill program and onsite sluice box sampling using material not caught in a standard RC sample, the company believes that in several cases the standard assaying process that was used for all reported assays herein did not adequately represent the coarse free gold that was observed within brecciated quartz samples at Tuscarora. As a result, the company has engaged with ALS Laboratories and plans to complete photon assays on select samples from the Tuscarora program.”

One of American Pacific’s projects is the Tuscarora Gold-Silver Project in Elko County, about 12 miles southwest of Jerritt Canyon and 22 miles northeast of the Carlin trend.

“It is the same age as Carlin. It’s part of our belief that’s why the grades are so high.”

Gold nuggets have been found during American Pacific Mining’s exploration of the Modoc North Target area at the Tuscarora Project.