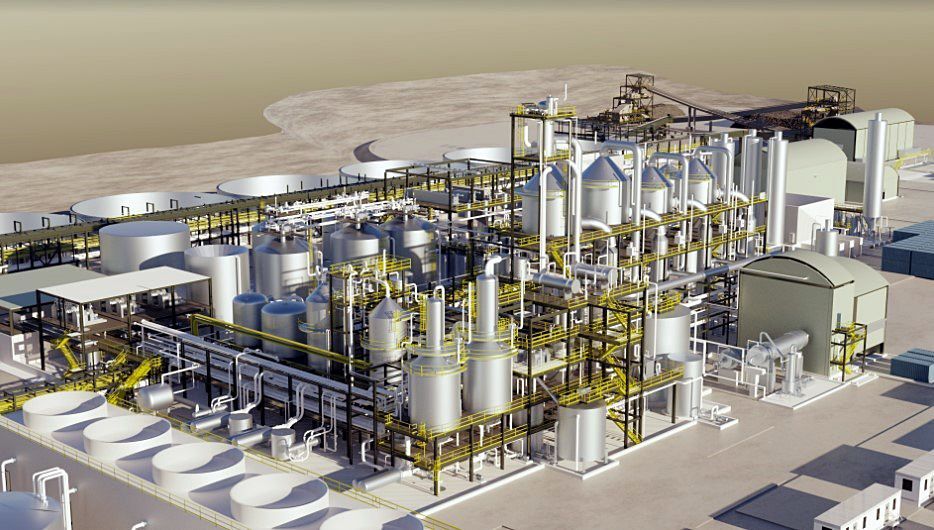 An artist's rendering of the Rhyolite Ridge lithium plant. 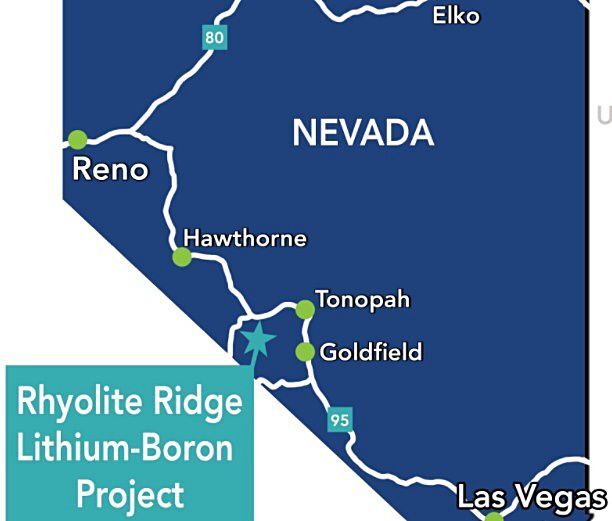 The Rhyolite Ridge lithium and boron project is in Esmeralda County in southeastern Nevada.

Construction of the large Rhyolite Ridge lithium project in Esmeralda County could begin in the second half of next year if the U.S. Bureau of Land Management issues a record of decision by then, said ioneer Ltd. Executive Chairman James Calaway, who is optimistic about ioneer’s joint venture with Sibyanye-Stillwater Ltd.

The joint venture is dependent upon permitting for Rhyolite Ridge, but the companies have a binding agreement so that “when we get the permits, the money starts to flow,” Calaway said. “Sibyane has very serious people with excellent work experience, and they put our project through extensive due diligence.”

Permitting from the BLM is on hold, however, until after the U.S. Fish and Wildlife Service “issues a final decision regarding the listing of Tiehm’s buckwheat for protection under the Endangered Species Act,” said Jess Harvey, public affairs specialist with the BLM’s Battle Mountain District.

Fish and Wildlife published the proposed rule listing the plant in the Federal Register on Oct. 7, opening a 60-day comment period. The agency then has up to a year to issue a decision.

The Center for Biological Diversity has been a major opponent of Rhyolite Ridge, and the Nevada director of the center, Patrick Donnelly, said USFW cannot use economic reasons to “pick between lithium or a wildflower.”

He said the buckwheat’s location is the only place the plant will grow, and “we’re very clear on our stance and will continue to pursue it in court,” if the BLM permits the project. “This mine is not moving forward anytime soon.”

The project operator will be ioneer, which is based in Australia.

Calaway said the total project cost is estimated at $800 million, including a “full-blown processing plant” that is expected to produce 175,000 tons of boric acid and 22,000 tons of lithium per day. And the project will involve 600 workers during construction and 250 to 300 jobs for regular operations.

“This will transform Esmeralda County,” he said in a phone interview. “It’s two years of construction and six months of commissioning.”

The biggest town near Rhyolite Ridge is Tonopah.

Calaway said Rhyolite Ridge will be mining lithium and boron ore, processing the ore with 10% sulfuric acid and 90% water, creating lithium and boric acid products. The lithium in clay on site will be stockpiled for potential production later if the production becomes economically viable.

The boric acid product will be a white powder used in housing insulation, cell phone covers, glass-top stoves, televisions and much more.

“There are 130 uses for the material,” Calaway said.

He said the processing will be a “very high-tech operation.”

There will be a “relatively small pit” for mining the deposit, Calaway also said, pointing out that there will be no tailings dam and the project already has state water permits.

His optimism about Rhyolite Ridge covers the company’s plans to nurture the Tiehm’s buckwheat on 10 acres of the project site after USFW’s decision to propose the endangered listing for the wildflower.

He said ioneer expects the agency to list the Tiehm Buckwheat at the edge of the roughly 2,000 acres of the project site, which he said would make the plant’s status clear to all.

“We supported it actually. It is better to declare it an endangered species,” said Calaway, who lives in Texas. “We’ve had to do a lot of work to develop the plan that allows us to save the mine without touching the plants, and we intend to move forward on that basis.”

The managing director of ioneer, Barnard Rowe, said in an Oct. 5 reaction to the Fish and Wildlife decision that ioneer “has invested considerable funds into undertaking the most comprehensive studies and efforts into Tiehm’s buckwheat management strategies to date to ensure the species is not only protected but that its populations are expanded in the years to come.”

Calaway said that ioneer is looking at increasing the size of the buckwheat’s habitat another 50 to 100 acres “within a half mile of the current population” of the plant and protecting the species against further animal attacks. Rodent attacks on the Tiehm’s buckwheat destroyed plants last year.

“Almost half of them were destroyed by drought and by animals,” he said, adding that in the five years ioneer has been working on the project we “never, ever hurt the plants. There was nothing suspicious about it. There was a bumper crop of rodents.”

An investigation showed animals were to blame, according to Calaway.

Donnelly said he disagrees with ioneer’s expectation that the wildflower can be established near the current growing site, and “attempts to propagate the plants failed. They all died, so ioneer doesn’t have a plan. Their plan is bunk and doesn’t reflect the consensus of the scientific community.”

He said the Center for Biological Diversity does not oppose lithium mining, and lithium is “all over the place” in Nevada, but ioneer wants the Rhyolite Ridge site because the boron makes it less costly to extract.

“There is no compromise. They cannot hurt the buckwheat,” Donnelly said in a phone interview.

Calaway said the only issue raised so far about Rhyolite Ridge has been focused on the 10 acres of Tiehm buckwheat, which the BLM already classifies as a sensitive species, and “we’re shovel ready. The last little bit of tweaks will be for avoidance of the Tiehm buckwheat, then we’re ready to go to public comment.”

He said Rhyolite Ridge is about climate change, and “we’re not building a coal mine or a gold mine. It’s a very important asset, with a strong environmental benefit. We plan to be excellent stewards.”

The lithium produced at Rhyolite Ridge would be used for batteries that power electric cars that would in turn reduce carbon emissions.

“We better get on it right now and build these facilities right now,” because electric cars are going to be a big part of this country’s future but without lithium production in the U.S. battery production will rely on foreign sources, Calaway said. “I think people are waking up to the need.”

He said he cannot understand why opponents of the Rhyolite Ridge lithium project seem to think the project could be relocated when the deposits are the only ones of that type – at least found so far.

“It is the only material like this on Earth,” he said, adding that the discovery came because of a “white hill that stuck out of the ground.”

Rowe is credited with realizing the potential of the site when he visited the deposit in 2016. He secured a 12-month option over the project to give the company time to assess the deposit, later named Rhyolite Ridge, according to the company’s website.

Along with the JV agreement, the companies entered into an agreement for the strategic placement of $70 million in ioneer shares with Sibanye-Stillwater, and the arrangement was completed on Oct. 28, after approval by shareholders of both companies on Oct. 21.

Sibanye-Stillwater stated that the company “is pleased to be joining the ioneer share register as a supportive strategic partner and looks forward to working together with ioneer as joint venture partners to develop the Rhyolite Ridge Lithium Boron Project into a leading U.S. lithium operation.”

The chief executive officer of Sibanye-Stillwater, Neal Froneman, had said when the JV was announced in September that the arrangement with ioneer is the second lithium transaction and the third transaction in the battery metals sector for the company. The company has the Keliber lithium site in Finland and the Sandouville nickel site in France.  

Lithium: A year of progress and protests

China’s Ganfeng Lithium is the largest shareholder in Lithium Americas, the company planning the Thacker Pass mine, according to the New York Times.

An artist's rendering of the Rhyolite Ridge lithium plant.

The Rhyolite Ridge lithium and boron project is in Esmeralda County in southeastern Nevada.