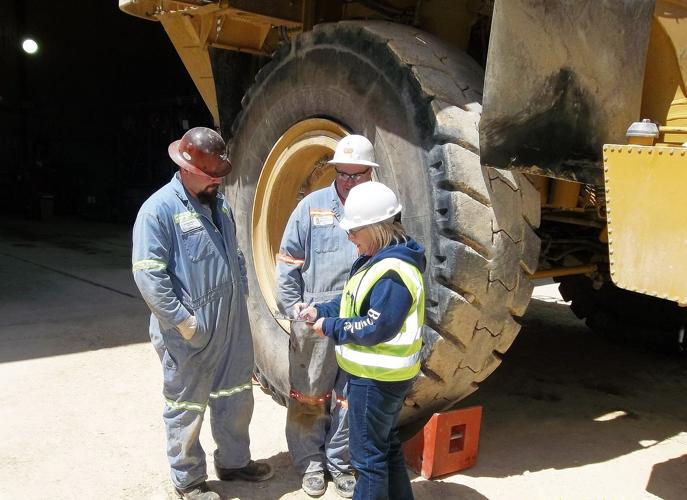 An observer has a follow-up conversation after employees worked on a piece of equipment. 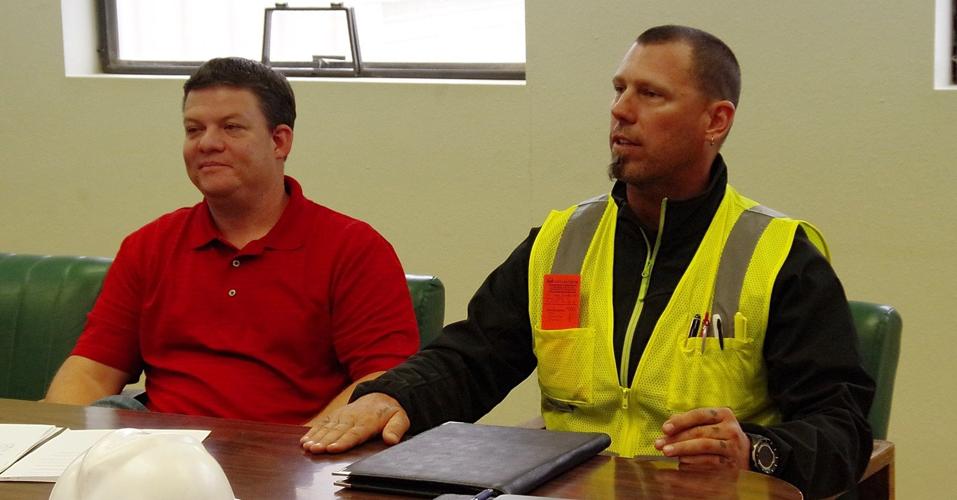 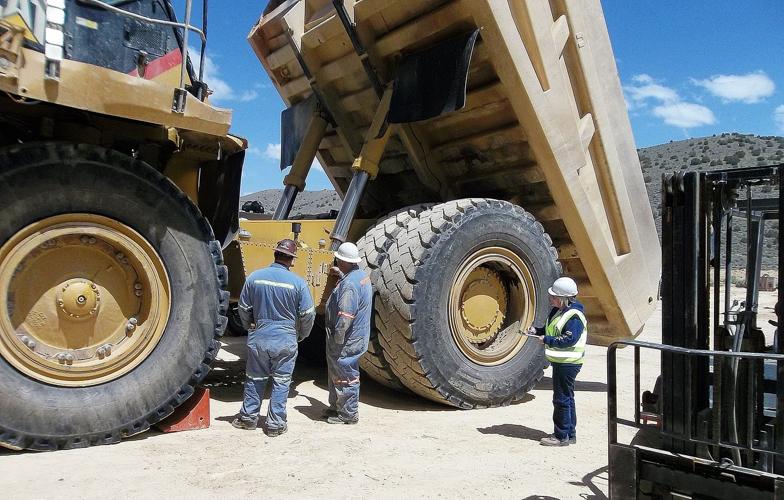 An observer watches as employees go about their tasks when working on a piece of equipment. 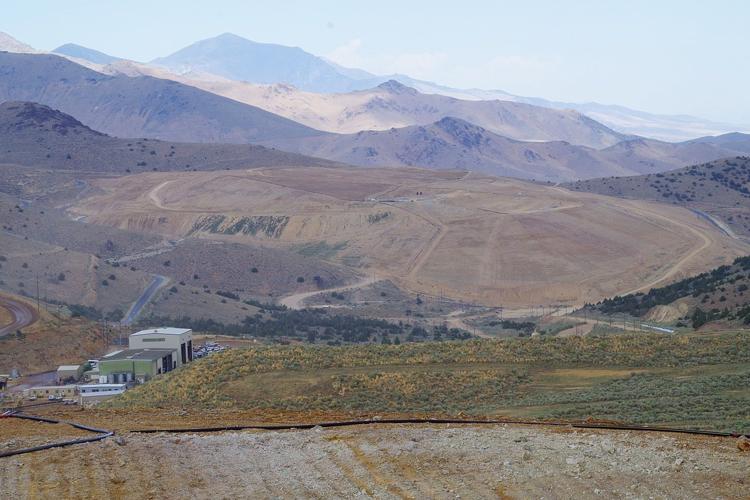 In other CRI news, Assistant GM Greg Robinson said the planned heap leach expansion is on track. Currently, the company is working through the EIS with the BLM, and the first draft will go out for public comment during summer 2015. Robinson said they still plan for full approval in 2016. 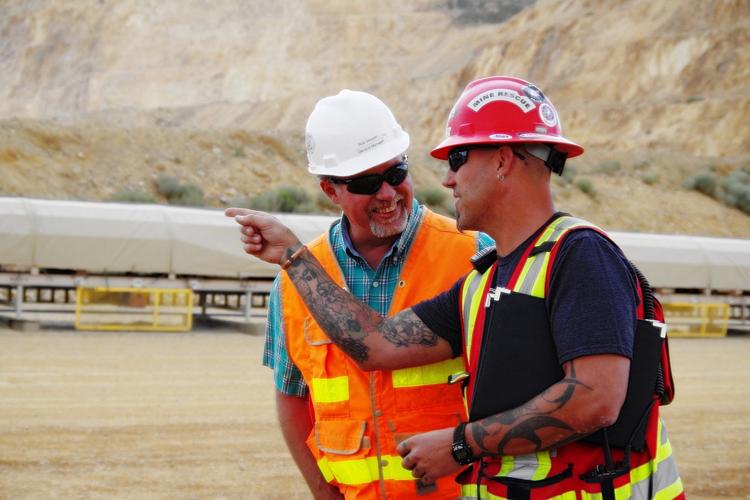 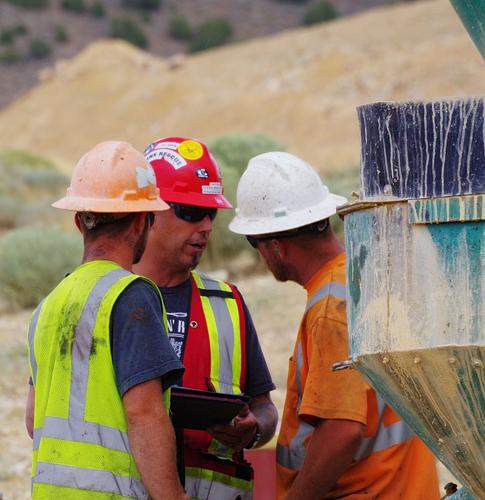 LOVELOCK – Safety programs – not just in mining but throughout industry -- have traditionally represented a contentious relationship between management and employees.

In that scenario, mistakes or damage to equipment may lead to loss of employment. Worse, since issues of safety are sometimes handled after incidents, mistakes in judgment have led to loss of life.

Over the course of the last 15 months, Coeur Rochester (CRI) employees have adopted a new method to address safety issues, called COEUR (Collecting Observations to Eliminate Risk), which focuses on observable behaviors and positive feedback.

COEUR has its foundations in BAPP, the Behavioral Accident Prevention Process, a registered trademark, but the process was tailored for the mine.

One of the points stressed by Wagner and Mastalka was the fact COEUR is not a program but rather a process – it had a start but never ends. The process is guided by a steering committee comprised of hourly employees, whose members rotate frequently to keep the perspective fresh.

The process – to use the correct term – is employee driven. Employees are trained to observe other employees on the mine site with a focus on critical behaviors, which may be either at-risk behaviors or those deemed safe behaviors.

In the field, the trained observers seek permission from employees to watch them go about their tasks. To date, there have been no reported refusals. While conducting the observations, the observers check off what they’ve seen on a critical behaviors checklist developed specifically for the mine site.

Following the observation, the observer has a conversation with the employee about some of the things he/she has seen.

Mastalka, who facilitates the program, made the point there is zero-confrontation between the observers and the person who was being observed during the conversation because the purpose is to promote safe behaviors and not "gotcha" moments. To that end, no names are attached to the checklist.

After the observation, the checklisted behaviors are put into a software program where the checklisted items are turned into data points. One of the results of the information gathered is the ability to see trends in at-risk behaviors – across the mine site.

The information gathering goes way beyond what is usually seen in the industry, which are documented cases of loss time accidents, equipment damage, first aid, and other after-the-fact incidents.

As Wagner noted, mining and industry conditions are dynamic as opposed to static. For example, on the particular day the safety team outlined their program, the weather changed from rain to sleet to snow in a very short time.

Wagner said, “Look at the example we have today; look at the conditions (employees) had to adapt to. We have to understand what they’re faced with – even with that little change in the weather.”

Once a problem is identified, one of two outcomes may occur. If the fix is easily addressed with the safety department – it’s fixed. Otherwise, the issue may go to a small subcommittee comprised of managers and the general manager whose task it is to remove any barriers that may exist in order that the issue be addressed.

Mastalka gave the following example: if snow or mud has blocked a crossover, employees may take shortcuts to get where they’re going – an at-risk choice. That is a problem within the process, or the infrastructure, that needs to be addressed.

So while it is true the process is employee-driven, the overall success takes organizational commitment.

According to Wagner, the drive to implement COEUR actually started at the corporate level with their leadership team. From there, the process was brought to the Pershing County site and later to the Kensington mine. The mine general manager is the COEUR sponsor, responsible for overseeing the general health of the process.

There are short term and long term goals associated with COEUR. One of the eventual goals is to have everyone on the mine site trained as observers. There are currently 117 trained observers of the approximately 300 people employed at the mine site. Mastalka facilitates the 8- 9 hour training course, which includes both classroom training and field work, but he is currently in the process of training more trainers, which will go a long way toward meeting the goal.

As part of the training, the employees learn how to observe, use the checklist, how to have conversations with their fellow employees in the non-confrontational manner promoted by the COEUR process, and the importance of the positive feedback so critical to the process goals.

With the proper training, Wagner explained, employees are in a position to eliminate discomfort and create the positive environment necessary for the observer and the person observed to engage in a free conversation.

“We’re hoping this becomes the standard not only within mining, but I think it is setting precedence for how we do business in every industry,” Wagner said. “I think that much of it because it drives down to the individual.”

Safety, he added, is personal to every individual and the COEUR process allows that to take place. Obviously, a person has to learn a lesson from things that have already happened, but COEUR places a priority on at-risk behaviors before something happens.

The data management has allowed CRI to track the health of the process in terms of the increase in safe behaviors and the decrease in at-risk behaviors.

According to Wagner, when the first quarter 2015 was compared to the first quarter of 2014, overall incidents and property damage were reduced by 50 percent. Loss-time-incidents have fallen well below what would be thought of as normal in the industry.

He said, “We have seen some pretty immediate benefits from process.

The COEUR process has done more than just improve safety, it has also improved morale by creating trust between managers and hourly employees and through the process of improving positive communication. There are avenues for discussion between hourly employees and the people they observe, which includes their peers as well as supervisors.

In terms of the long and short term goals, one of the hopes is by taking safety down to the personal level, employees will have an overall concern for safety – even in their personal lives and home, where statistically accidents are more likely to occur.

Mastalka said being involved in the safety aspect of mining has changed his behavior even at home. There might have been a time, he acknowledged, when he would have fired up the chainsaw to cut some wood without first donning a pair of safety glasses – something he would never do now.

Wagner joked the very first time he saw Mastalka he was limping from a motorcycle accident.

Wagner and Mastalka see a time in the future when COEUR is more than a process.

Wagner said, “Eventually the goal is to turn it into a culture: This is who we are. This is how we do things. It is really tough to do that with just policies and rules. When you get personal and give (the employees) ownership; then they’re going to go in that direction.”

The current plans for expanding the Marigold Mine which the BLM covered in its Draft EA is called the Valmy Development.

“An entirely new, and unexpected, Carlin-style mineralization potential has emerged from this drilling campaign and a future, deeper drilling program is justified ..."

Two underground projects will go forward at Round Mountain Mine in Nevada, while two surface mining projects are on hold.

US Gold announces Zinke's resignation from board

CHEYENNE, Wyo. — U.S. Gold Corp. has announced the resignation of Ryan Zinke from its board of directors effective Dec. 31, 2022.

Production increases for i-80 Gold

The company is pushing ahead with projects on several fronts in Nevada, along with producing gold from residual leaching at Ruby Hill and Lone Tree

An observer has a follow-up conversation after employees worked on a piece of equipment.

An observer watches as employees go about their tasks when working on a piece of equipment.

In other CRI news, Assistant GM Greg Robinson said the planned heap leach expansion is on track. Currently, the company is working through the EIS with the BLM, and the first draft will go out for public comment during summer 2015. Robinson said they still plan for full approval in 2016.