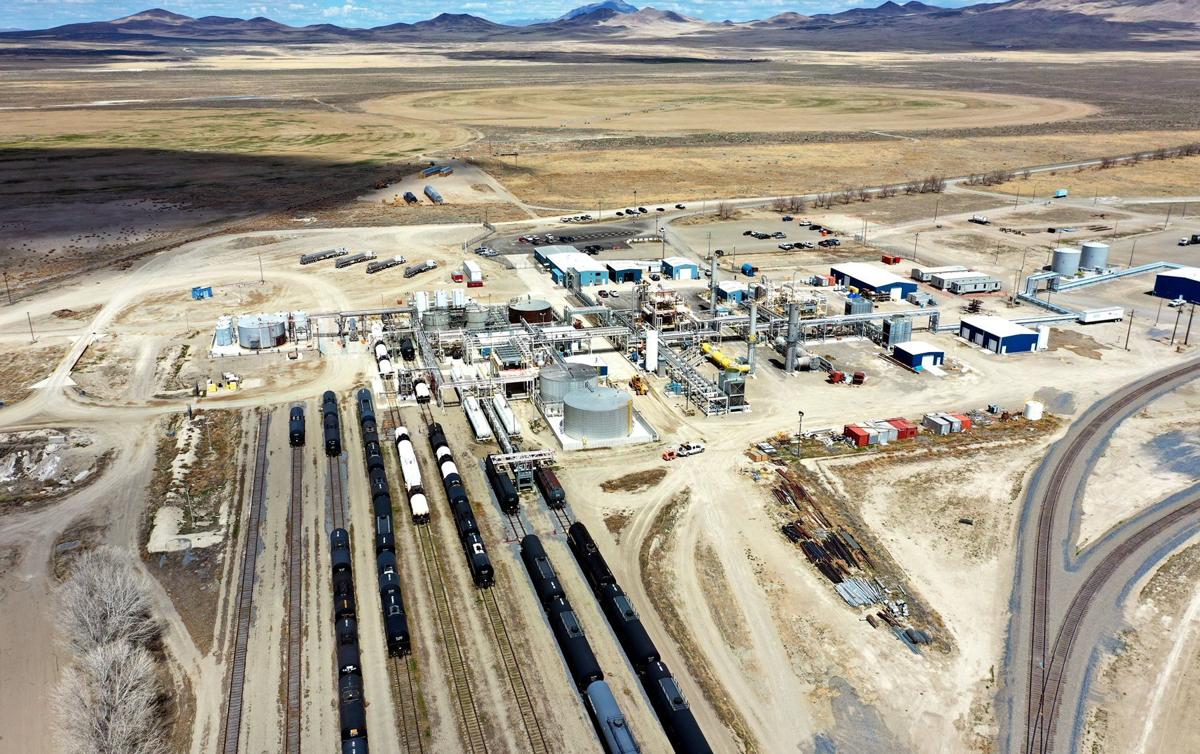 Cyanco has been operating since 1990 at Winnemucca, but the operations have expanded over the years, most recently with the addition of a solid sodium cyanide plant. The first two liquid sodium cyanide plants are to the right of the railroad tracks and the solid plant is to the far right. Cyanco ships its products by rail and by truck. 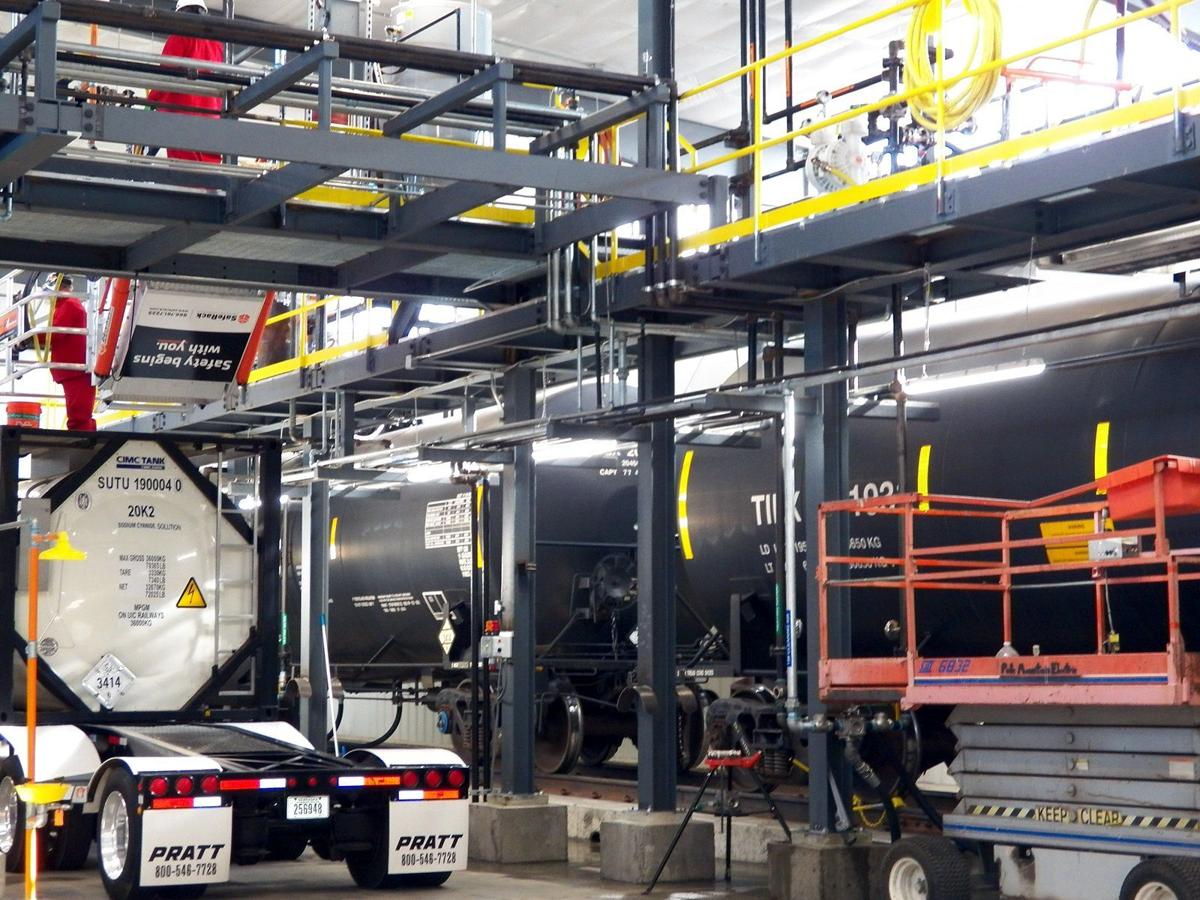 Cyanco’s transloading terminal at Cheyenne, Wyo., unloads cyanide product from rail cars coming from Winnemucca to trucks for transport to customers in Colorado. The terminal began delivering product on Jan. 2, 2017. There also are terminals in Mexico and Canada.

Cyanco has come a long way since opening a plant near Winnemucca in 1990, with expansions at Winnemucca, a new plant in Texas, international sales, transloading facilities in Cheyenne, Wyo., Canada and Mexico, and the ability to produce both liquid and solid sodium cyanide.

Cyanco has always produced liquid sodium cyanide for the mining industry but expanded the Winnemucca plant to produce solid sodium cyanide, as does Cyanco’s plant built in Texas in 2012-2013.

“Cyanco’s solids plant transitioned from the commissioning phase to operational in the second quarter of 2020. With all systems fully functioning and all safety measures firmly in place, the plant began producing its first briquettes and delivering inaugural shipments of product to customers in May,” said Justin Manganaro, vice president of Cyanco’s operations.

He said the Winnemucca plant is operated by four rotating crews composed of 16 individuals and supported by additional maintenance personnel.

“The solids product definitely has a larger shelf life and lends itself to being shipped around the world,” said Michele Duttlinger, vice president for Cyanco’s supply chain and planning.

The Winnemucca plant is the world’s largest sodium cyanide production facility, moving product by truck to gold and silver mines in Nevada and shipping cyanide by special rail cars beyond Nevada. The plant employs 65 out of 109 Cyanco employees companywide, according to Marketing Director Kelly Mandarano.

Before expansion, the Winnemucca plant was more limited in how far it could ship liquid sodium.

“Looking at the expansion that was brought online last year to bring solid sodium cyanide in addition to the traditional solution offered, that’s really allowed us to expand the base and utilize the plant in Winnemucca to its fullest capacity,” Duttlinger said in a phone interview.

The Texas plant near Houston produces the solid product for international sales.

“We can pull out of the Houston terminal by truck, rail or put it on ships for the international market,” Duttlinger said.

Solid cyanide going to Mexico from Texas is transported by truck.

Duttlinger said the rail cars coming from Winnemucca are hopper cars where solid sodium cyanide can be mixed with water to be loaded into tanker trucks at the terminals. The hopper rail cars stay in Cyanco’s fleet and are only used for cyanide.

Solid sodium cyanide also can be shipping in one-ton boxes or steel containers to distant lands. Mines receiving the boxes mix the solid with water into a hopper on site. The steel containers are connected to the local water supply to dissolve the briquettes, Duttlinger said.

There is a system in the reusable steel boxes that allows for mixing the water and solid product, and “there are pros and cons to both container types,” she said. Mines need to return the steel containers for reuse. The mines using the giant boxes must dispose of the packing material.

The key is that haulage of liquid sodium cyanide is kept to short distances for safety and liability reasons, and Cyanco tracks trucks with a system that has become “more sophisticated over time” to provide data on how long it takes to travel and how long trucks sit before being unloaded, she said.

The newest transloading terminal is in Val-d’Or, Canada, completed in 2020. The first transloading center was opened in nearby Cadillac, Quebec, in 1996-1997.

The Cheyenne terminal made its first delivery on Jan. 2, 2017. The plant serves customers in Colorado. Rail cars bring the sodium cyanide to Cheyenne for transloading onto trucks. The transloading terminal in Hermosillo, Mexico, also was started in the same time frame.

All truck drivers understand how to deal with cyanide and are specifically trained, and Cyanco provides training to mine customers so they meet the International Cyanide Management Code.

“As a founding member of the International Cyanide Management Code, Cyanco is 100% committed to safe manufacture, transport and use of sodium cyanide – from production line to mine site,” Manganaro said in an email.

Mines use cyanide in their processing mills and on their heap leach pads.

With added business, Cyanco is increasing staffing at Winnemucca and throughout the company, bringing in the “best talent,” according to Duttlinger, who said the Cyanco sales team is looking at the ability to get the company’s product into more international markets.

The company has operated throughout the COVID-19 pandemic under strict safety measures.

“Cyanco’s leadership team took action as early as January 2020 and implemented a workforce protection plan in response to the virus, including COVID-19 education and training, requirements that all non-production employees work from home, restricted access to our facilities, implementation of temperature checks and screening questionnaires for everyone who enters our gates and strict social distancing measures,” Manganaro said.

He said masks are worn at all times, and the company adheres to diligent health and cleaning protocols.

Cyanco also “significantly increased its community engagement across all its hubs, including support for schools, food banks, hospitals and local businesses,” Manganaro said.

Marketing Director Mandarano said Cyanco also contributed to the I-80 Fund established by Nevada Gold Mines to help businesses impacted by the pandemic, and Cyanco bought “a bunch of Chromebooks” for schools in Humboldt County for distance learning.

Cyanco marked its 30th anniversary in late November, with the Winnemucca plant as the starting point.

“At that time, Nevada’s gold and silver mining sector was on a steep growth curve, and Cyanco’s founders saw an opportunity to serve those mines with a new solution and unparalleled service,” he said. “While our original model was exclusively based on tank-to-tank delivery of a solution product, the company has since grown into the world’s largest sodium cyanide supplier, at over four times its initial size.”

Manganaro said that Cyanco is “committed to meeting or exceeding all regulatory and legal requirements, while predictably and reliably delivering superior products and services to customers around the globe.”

Beaudreau's appointment is widely seen as an attempt to win favor with moderates who are vital to a number of Biden's priorities, including his $2.3 trillion infrastructure and clean energy plan.

Cyanco has been operating since 1990 at Winnemucca, but the operations have expanded over the years, most recently with the addition of a solid sodium cyanide plant. The first two liquid sodium cyanide plants are to the right of the railroad tracks and the solid plant is to the far right. Cyanco ships its products by rail and by truck.

Cyanco’s transloading terminal at Cheyenne, Wyo., unloads cyanide product from rail cars coming from Winnemucca to trucks for transport to customers in Colorado. The terminal began delivering product on Jan. 2, 2017. There also are terminals in Mexico and Canada.