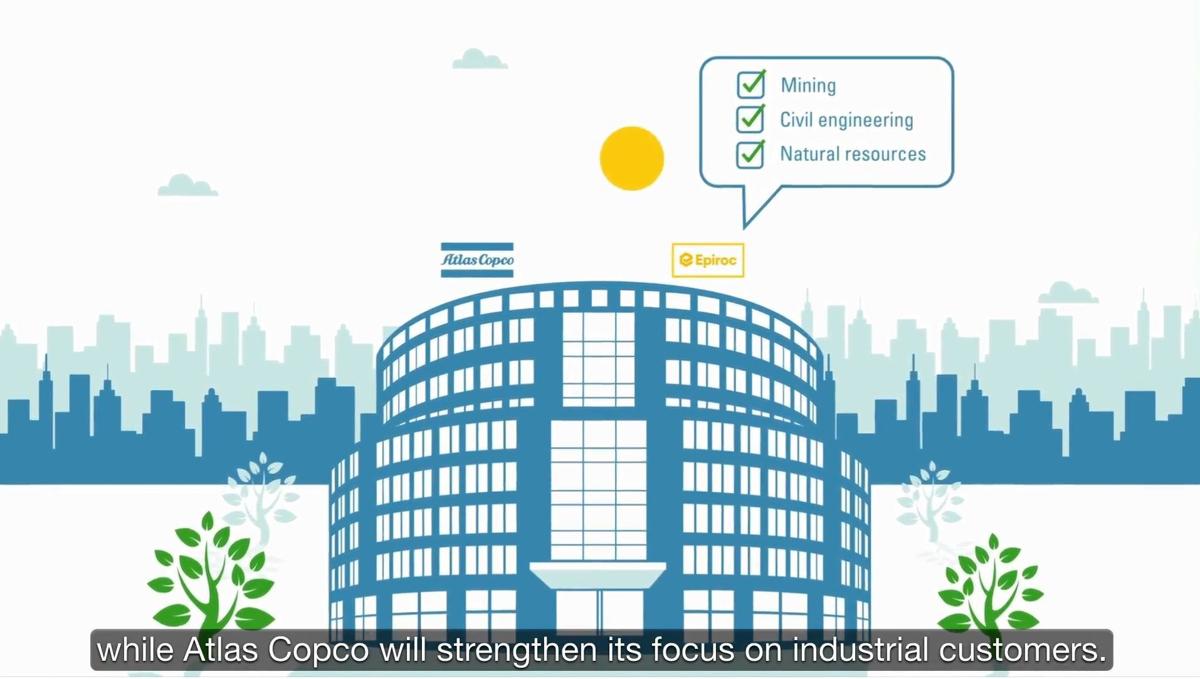 This Atlas Copco graphic from an online investor relations video shows how its subsidiary Epiroc, which could become a separate company this year, focuses on the mining, civil engineering and natural resources sectors.

Epiroc, a subsidiary of Atlas Copco, could split away from its mother company this spring, pending shareholder approval. The executive team is shown in a screenshot from an Atlas Copco presentation.

To better focus on its mining and civil engineering customers, Atlas Copco created Epiroc as a subsidiary that could become a separate company this year. Atlas Copco continues to serve industrial customers.

“We are building two world-class companies instead of one,” Atlas Copco states in an online video.

The decision to split came in early 2017 as a way to increase shareholder value and meet customer demand. Shareholders are scheduled to vote in April whether to dividend out Epiroc as early as this summer to be listed separately on the Nasdaq Stockholm stock exchange.

The 145-year-old Sweden-based company settled on Epiroc as the name to “signal stability and durability.” “Epi” is a prefix meaning “on,” and “rock is one of the most important materials the company works with,” according to a press release.

“With Epiroc we have found a short, distinct and timeless name that is spot on for the mining and civil engineering businesses,” said Annika Berglund, Atlas Copco senior vice president of corporate communications and governmental affairs.

The transition is expected to be seamless, with research and development, and products and services remaining the same under Epiroc as they were under Atlas Copco.

Epiroc has 12,5000 employees worldwide, and all will keep their jobs, said said Ola Kinnander, Atlas Copco media relations manager who will move to Epiroc after the change.

“What the split really means is that top management will come even closer to this business, not having to deal with Atlas Copco’s other businesses, and with that increased focus we will be able to serve customers even better,” Kinnander said.

Leading Epiroc are Per Lindberg as CEO, and Ronnie Leten, former Atlas Copco president and CEO, as chairman of a board of directors.

Nevada Gold Mines sponsored a medical student's rotation at Golden Health Family Medical Center by providing a $1,500 clinical scholarship and housing. A second student also participated at the Golden Valley Health Clinic in Winnemucca in May.

AB148 prohibits a business applying for a reclamation permit to receive one if the business or anyone with a controlling interest in the business has defaulted on an obligation related to reclamation anywhere in the United States.

Gold Standard makes plans for mine

The Bureau of Land Management's Elko District has started the environmental impact statement process for the proposed mine, and Gold Standard hopes to start mine development at the end of next year and produce gold in 2023.

RENO – The new i-80 Gold Corp. has given the new name of Granite Creek to the Getchell Property the company recently acquired, and i-80 Gold r…

This Atlas Copco graphic from an online investor relations video shows how its subsidiary Epiroc, which could become a separate company this year, focuses on the mining, civil engineering and natural resources sectors.

Epiroc, a subsidiary of Atlas Copco, could split away from its mother company this spring, pending shareholder approval. The executive team is shown in a screenshot from an Atlas Copco presentation.