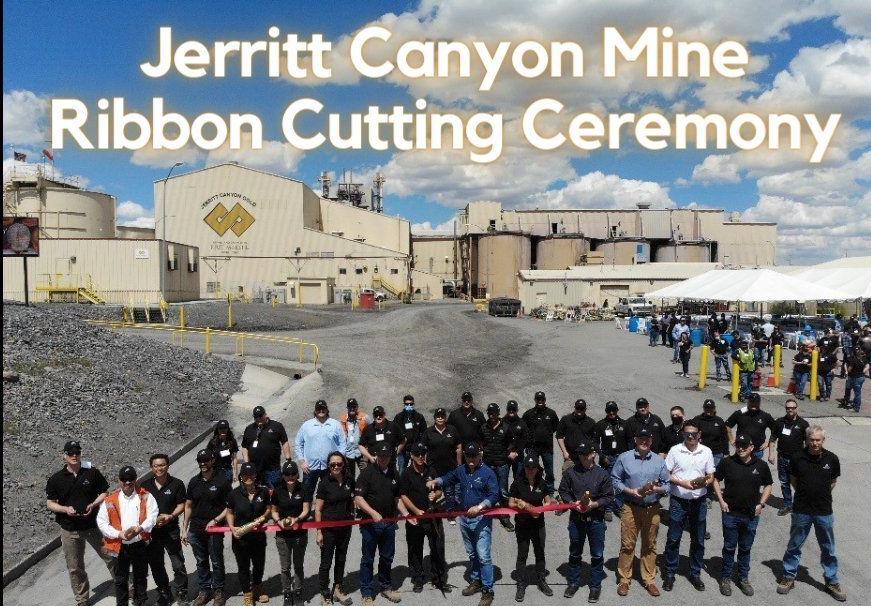 First Majestic Silver Corp. celebrated its acquisition of Jerritt Canyon with a ribbon cutting on May 13. 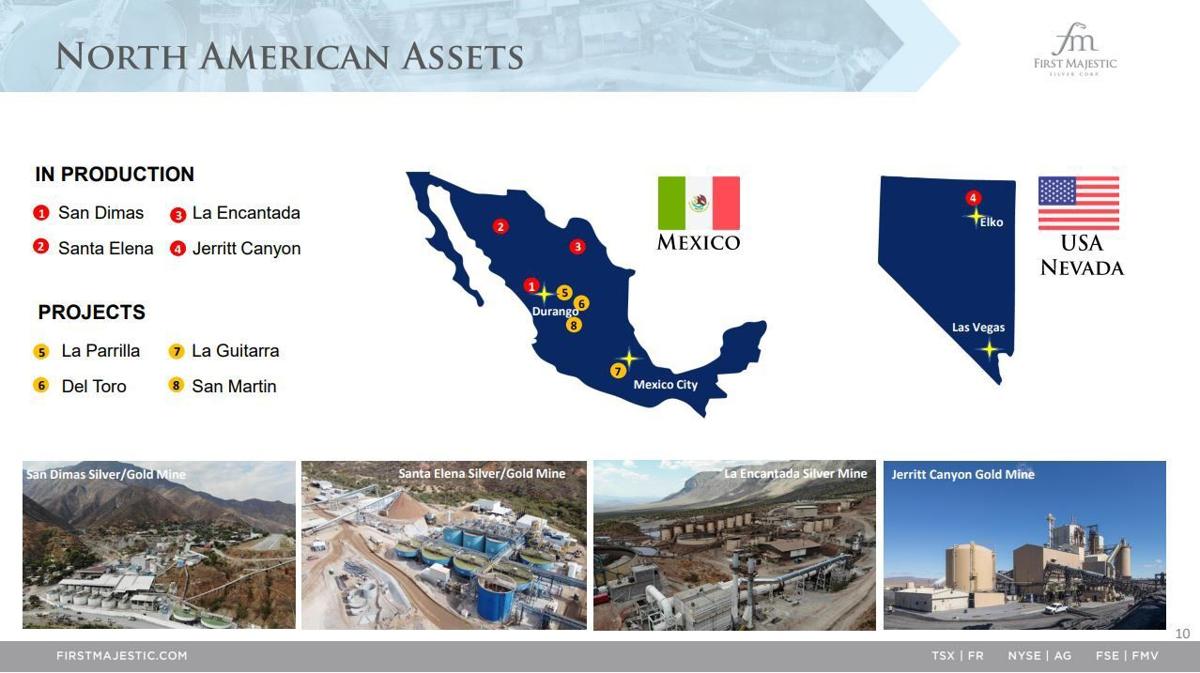 First Majestic Silver Corp. mainly produced silver from its portfolio of assets in Mexico before its purchase of the Jerritt Canyon gold mine site in northeastern Nevada. 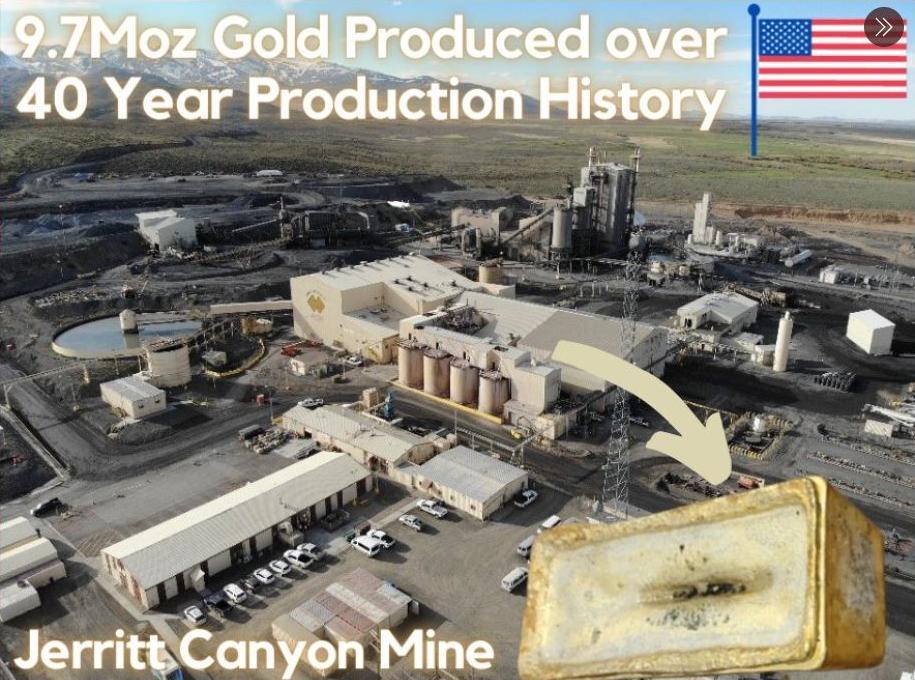 First Majestic Silver Corp. leaders are hoping to unlock value at Jerritt Canyon through increased exploration and development rates to boost production and lower costs, the company announced on Twitter.

The company’s chief operating officer, Steve Holmes, said the acquisition is “very exciting for us.”

Purchasing Jerritt Canyon gives the company diversification from mostly silver and, until now, mining only in Mexico.

“We’re a mid-tier company with more than 5,000 workers and contractors in Mexico,” Holmes said.

Jerritt Canyon’s acting general manager, Mani Alkhafaji, said that “the integration progress is going quite well. We’re using this opportunity to learn the best practices currently at Jerritt and bring the ones we’ve already developed at First Majestic throughout our 18 years of operating history.”

He said that First Majestic’s “focus is retaining and attracting talent. We do plan on growing over the next two to three years, so our resources will need to match this objective, as well.”

The mine has roughly 300 employees, and Holmes said First Majestic is bringing in people to boost the technical team.

“We have a very strong technical team,” he said, adding that resolving difficult issues at Jerritt Canyon requires a committed team. “That’s not to say we won’t run into roadblocks, but we are problem-solvers.”

Jerritt Canyon has two underground mines that are producing gold – the Lee Smith Mine and the SSX Mine—and the mill that is one of the few roasters in Nevada.

With the acquisition, First Majestic now has a 119-square-mile land package, and Holmes said First Majestic is confident it can boost gold production and see the mill operate at capacity through exploration and toll milling.

Exploration at the front end will strengthen Jerritt Canyon’s production profile, and First Majestic “will work on a pretty robust program for 2021-2022. We have to do lots more exploration drilling,” he said.

Holmes said First Majestic “thinks there is a huge opportunity to support the plant,” which is now at about 60% capacity. “That is the low-hanging fruit, and we will get busy and pick it.”

One solution while Jerritt Canyon awaits more ore production is to do toll milling, and the company is considering more than a dozen proposals to “see what options make good sense. We can toll mill two types of materials, raw ore and concentrates from other mines. We are looking at all these options,” he said.

More ore from mining and from toll milling for other companies should reduce mine costs, he said in a phone interview.

“As they ramp up underground, we can use tolling as a bridge to get the plant up to capacity,” Holmes said.

Scott Richey, senior geologist with the Humboldt-Toyiabe National Forest, said that an environmental assessment is in progress for “additional exploration all over the property.” He said the EA calls for up to 500 acres of disturbance over a “multi-year effort.”

Jerritt Canyon is on land managed by the USFS and on private land in checkerboard pieces.

Richey said the EA is scheduled for completion this year, so “they may be able to drill this fall.”

Small Mine Development is under contract to mine Lee Smith and SSX, and is drifting underground to connect them for the exploration and mining potential. SMD has 106 employees at Lee Smith and 142 at SSX.

Holmes said the connection “opens up incredible potential,” and surface drilling on the large land package also shows potential. First Majestic will consider open pit mining, but that takes more permitting time than continuing the exploration underground in the near term, he said.

First Majestic is in the process of rebuilding the budget for Jerritt Canyon that should show “significant investment” by the company, including for the connection between the two mines and work on a tailing facility, he said.

“Safe, profitable and sustainable production are the key cornerstone behind this growth objective we have,” said Alkhafaji.

The three operations in Mexico are expected to produce between 20.6 million and 22.9 million silver equivalent ounces this year, according to First Majestic.

The company produced 4.5 million silver equivalent ounces in the first quarter of this year, which was before the Jerritt Canyon acquisition was final on April 30. That figure included 2.9 million ounces of silver and 23,873 ounces of gold.

“We have a tremendous land position in Mexico,” Holmes said.

He said the president and CEO, Keith Neumeyer, who founded the company in 2002, believes “the future of silver is even more compelling than gold” because of the digital age and the technology that uses silver.

The company’s first-quarter earnings report showed revenue of $100.5 million, up 17% from the 2020 quarter, and net earnings of $1.9 million, compared with a loss of $32.4 million in the first quarter of last year mainly because of a $22.7 million loss related to mark-to-market adjustments on the company’s foreign currency derivatives.

“Due to the high demand for physical coins and bullion, our online retail store generated $4.8 million in silver sales during the quarter, or approximately 5% of our $101 million in total quarterly revenues, representing a new record in its 13-year online history,” he said.

Neumeyer also said that because of demand, the company is working with mints and refiners to direct as much silver sales as it can through its online store.

The average realized silver price was $27.13 per ounce in the 2021 quarter, up 56% over the 2020 quarter, according to the earnings announcement.

Before the new ownership, Sprott Mining owned and operated Jerritt Canyon Mine for the past five years, acquiring the mine from Veris Gold. The mine has been in operation since 1981 under owners that included Freeport-McMoRan, Independence Mining, AngloGold Ltd. and Queenstake Resources.

In the March 12 announcement that First Majestic would be acquiring Jerritt Canyon, Eric Sprott, president of Sprott Mining Inc., stated the arrangement was a “win-win for both parties, and we look forward to having continued exposure to Jerritt Canyon’s bright future through our increased ownership in First Majestic.”

He said then that he saw the deal as “a big step forward for Jerritt Canyon, where it can flourish under the larger umbrella of First Majestic.”

Holmes said Sprott and Sprott Mining improved and stabilized Jerritt Canyon, particularly water management, and the next phase will be “a phase of growth and expansion.”

First Majestic closed on the acquisition of Jerritt Canyon Canada Ltd. from Sprott Mining Inc. at the end of April, and in a concurrent arrangement Eric Sprott invested $30 million in First Majestic at a price of $17.59 per share for more than 1.7 million shares.

Through the acquisition, First Majestic acquired all the issued and outstanding shares of Jerritt Canyon in exchange for nearly 26.72 million shares of First Majestic and 5 million purchase warrants at an exercise price of $20 per share for a three-year term.

With the transactions, Sprott owns and controls more than 28 million common shares and 5 million warrants representing roughly 11.3% of the company’s outstanding common shares.  

Under the law, top legislative leaders from both political parties are required to submit a list of recommendations to the governor.

Sullivan has worked on all aspects of water resources throughout Nevada for more than 20 years and has been with NDWR since 2009.

The Illipah site in White Pine County covers roughly 3,950 acres, and there is a closed heap-leach gold mine that produced 37,000 ounces of gold in the late 1980s. The acquisition comes with data from 562 drill holes, soil samples, rock samples and surface mapping.

RAM Enterprise is celebrating its 30th anniversary in 2021.

The agreement states that Endeavour Silver would acquire a 100% interest totaling about 3,500 acres on patented and unpatented claims, subject to pre-existing net smelter royalties.

The conference will feature tours of historic Virginia City, the Pumpkin Hollow copper mine in Yerington and the ghost town of Bodie in California.

Mine reclamation heals past, preserves future

Nevada is seeing an uptick in mine and exploration projects for minerals. The state issued 261 reclamation permits in the first quarter of 2021. State law requires every one of those projects to reclaim any disturbed land when operations cease.

McEwen production up in quarter

TORONTO – McEwen Mining Inc. reported consolidated production in the second quarter rose, with the company producing 31,700 ounces of gold and…

Barrick production down in quarter

First Majestic Silver Corp. celebrated its acquisition of Jerritt Canyon with a ribbon cutting on May 13.

First Majestic Silver Corp. mainly produced silver from its portfolio of assets in Mexico before its purchase of the Jerritt Canyon gold mine site in northeastern Nevada.

First Majestic Silver Corp. leaders are hoping to unlock value at Jerritt Canyon through increased exploration and development rates to boost production and lower costs, the company announced on Twitter.