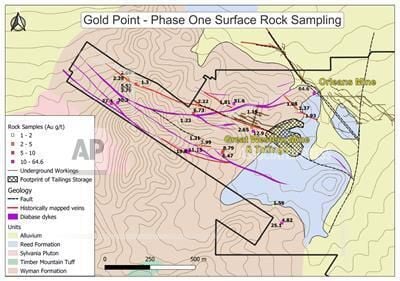 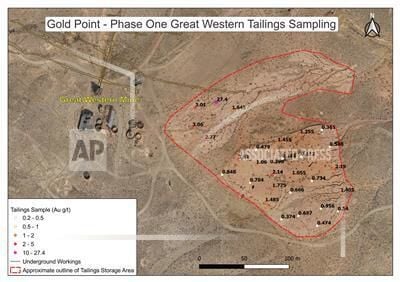 VANCOUVER, BC— GGL Resources Corp. has shared the results of reconnaissance-scale prospecting and surface sampling conducted in late October at its past-producing Gold Point mesothermal gold and silver project, located in the Walker Lane Trend, Nevada.

The company also reports that its initial program of underground sampling has recently been completed at the Great Western Mine, one of the two main former producers on the Gold Point property.

Highlights from surface sampling include:

-51.6 g/t gold and 230 g/t silver float sample collected from a structure parallel to the nearby Great Western Vein;

-25.1 g/t gold collected from a waste pile adjacent to a shaft targeting an undocumented vein.

"We are extremely excited about the results from our reconnaissance-scale exploration at the Gold Point property," GGL President David Kelsch said. "The results not only confirm the presence of significant mineralization at the known past-producing mines, but also demonstrate excellent potential elsewhere on the property in areas that have seen little historical work.

“We look forward to the results from our initial underground sampling campaign,” he added.

During the surface exploration program, samples were collected from historical tailings storage facilities to determine if potentially economical gold and silver remain. Records indicate the tailings storage facilities were established in the 1930s or earlier. They cover an area of approximately 23,000 m2 and range from 0.4 m to 2.0 m in thickness.

Detailed surveying, sampling, and testing are planned to accurately determine the volume and grade of the tailings, as well as recoverability of gold and silver.

Access to the underground workings at the Great Western Mine was re-established in December 2020. Field crews have now completed sampling of the 100 through 500 levels of the mine with the collection of 169 chip samples. Results will be released upon completion.

Planning and permitting are underway for the next exploration program, expected to commence in the first quarter of this year. This program is fully funded and will include reverse-circulation drilling, excavator trenching, rehabilitation work, and sampling at the Orleans Mine, the other main, former producer on the property. The initial drilling will test near to and along strike of known mineralization at the Great Western Mine. Later drill programs will be designed to test targets elsewhere on this under-explored project as additional results become available and comprehensive geological models are developed.

GGL is a Canadian-based junior exploration company, focused on the exploration and advancement of under evaluated mineral assets in politically stable, mining friendly jurisdictions. The company has recently acquired an option on the Gold Point project in the Walker Lane Trend located in Southern Nevada, which consolidated several gold-silver veins, two of which were past producing high-grade mines. The company also holds the McConnell gold-copper project located 22-kilometers southeast of the Kemess Mine in north-central British Columbia, and promising diamond exploration projects in Nunavut and the Lac de Gras diamond district of the Northwest Territories. Lac de Gras is home to Canada's first two diamond mines, the world class Diavik and Ekati mines discovered in the 1990s. GGL also holds diamond royalties on mineral leases in close proximity to the Gahcho Kué diamond mine in the Nor