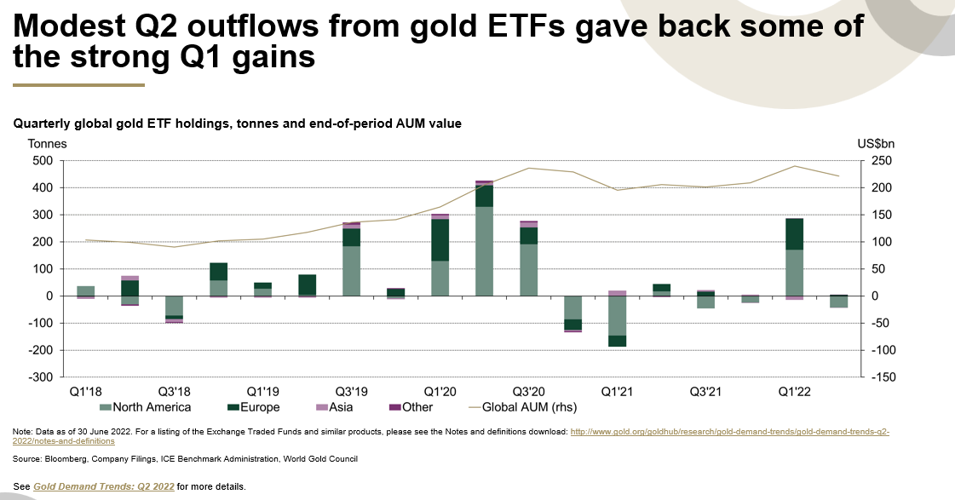 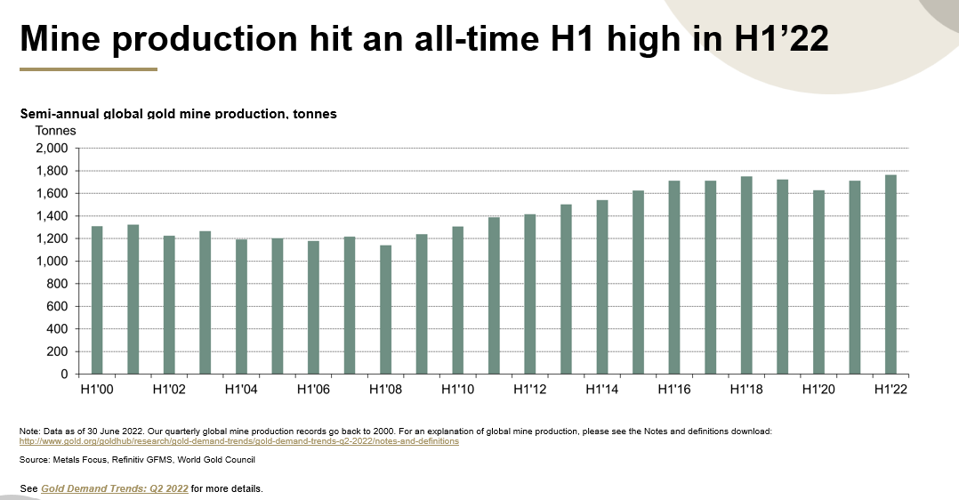 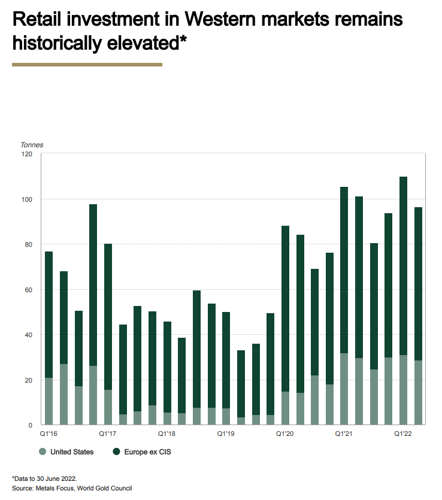 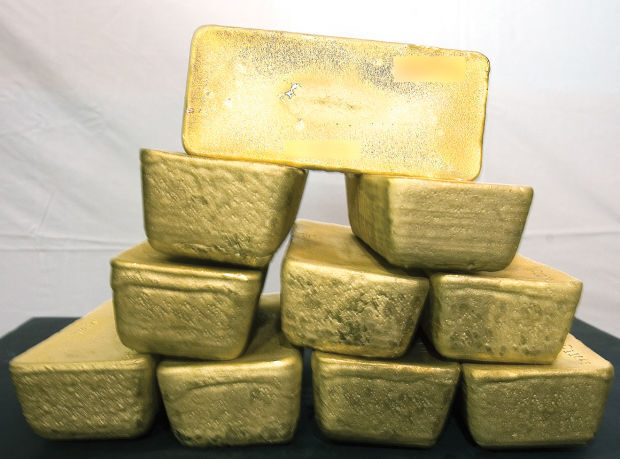 Gold demand for the first half of this year is up 12%, however, at 2,189 metric tons, which the report attributed to strong exchange-traded fund inflows in the first quarter of this year.

After an initial rally in the gold price in April on geopolitical risks and building inflationary pressure, the gold price dropped in the second quarter as investors shifted their focus to rapidly rising interest rates and a strong U.S. dollar, the World Gold Council stated.

The 6% decline in the gold price over the quarter impacted gold ETFs, which saw outflows of 39 metric tons in the second quarter, the WGC reported, adding that the second-quarter decline sets a weaker tone for ETFs in the second half of this year, given a potentially softening inflation outlook amid continued rate increases.

“In the first half of 2022, the global gold market was supported by macroeconomic factors, such as rampant inflation and geopolitical uncertainty, but it also faced headwinds from rising interest rates coupled with an almost unprecedented surge in the value of the U.S. dollar,” said Louise Street, senior analyst at the World Gold Council.

She said, however, that “while we have seen prices ease from exceptionally high levels in Q1, gold has been one of the best performing assets so far this year.”

The Federal Reserve raised the interest rate by a 0.75 percentage point in July, and Juan Carlos Artigas, global head of research for the World Gold Council said in an early August email that “most of the impact from the July FOMC (Federal Open Market Committee) meeting came from nuances within the statement and the reaction from the financial market participants rather than the 75bp (basic point) rate hike itself.”

He said that the subsequent “strong equity and bond rally and weaker U.S. dollar suggests to us that the current hiking cycle is mostly priced in, and markets are now viewing a more severe growth slowdown and softer inflation prints as the most likely scenario going forward.

“In the near-term, gold is likely to benefit both from the increasing risks of stagflationary conditions, the continuation of geopolitical risk and falling bond yields, as well as central bank buying and a recovering Chinese consumer. It is worth noting, however, that if inflation continues to escalate, the Fed may resume a more aggressive rate hike response, which could create some headwinds for gold,” Artigas said.

In the news release on the Gold Demand Trends report, Street stated that “looking ahead, we see both threats and opportunities for gold” in the second half of this year.

She said that as “many countries face economic weakness and the cost-of-living crisis continues to squeeze spending, consumer driven demand will likely soften, although there should be pockets of strength.”

Artigas said historical analysis of futures positioning in gold, the U.S. dollar and 10-year Treasury bonds “suggests gold could rebound in the near future. In the medium to long-term, gold’s performance will be determined between competing forces: on the one hand, demand for gold as a risk hedge, and on the other hand, a higher interest rate environment that may encourage investors to put more money on bond-like instruments.”

In the report, the WGC stated that it has revised slightly downward overall expectation for investment demand in 2022 based on a slightly weaker tone for ETFs in the second quarter, which continued well into July.

The report stated that growth in the demand for gold bars and coins in the second quarter was helped by a recovery in demand in India, the Middle East and Turkey, which helped balance weakness in Chinese demand that was partially driven by continued Covid-19 lockdowns.

Gold Demand Trends reported that in the jewelry sector, second-quarter gold demand increased 4% over the 2021 quarter to 453 metric tons, helped by a recovery in Indian demand that balances a significant 28% drop in jewelry demand in China.

In the outlook portion of the report, the WGC stated it was revising down its jewelry demand expectations for the full year because the largest risk to jewelry “comes from potentially weaker economic growth.”

China’s lockdowns have dented demand and a recovery will be slow due to the continued strict zero-Covid policy and stresses in the domestic real estate sector, but there could be an upside with pent-up wedding demand and dip-buying if gold prices are weak, according to the report.

Jewelry demand in India also faces downside risks in the second half of the year due to uncertainty over the economy, a higher import duty in India and the possibility of additional curbs on gold buying to “stem further depreciation of the Indian rupee,” the outlook states.

Mine production for the first half of the year hit record highs in the Gold Demand Trends data series, reaching 1.764 million metric tons, 3% higher than the first half of last year, the World Gold Council reported.

Production was boosted by some projects mining higher-grade deposits, and by the Chinese mining industry returning to normal output levels after safety stoppages last year, the WGC said.

Central banks were net buyers in the second quarter, increasing global official reserves by 180 metric tons, with net purchases reaching 270 metric tons, aligning with the World Gold Council’s recent bank survey, according to the report. Twenty-five percent of respondents to the survey said they intended to increase their gold reserves in the next 12 months.

“Over the first six months, central bank demand was boosted by significant purchases from Turkey, Egypt and Iraq, as well as more modest purchases from several regular buyers,” Artigas said. “This demand supports the findings from our 2022 annual central bank survey, in which one-quarter of respondents stated their intention to increase gold reserves in the next 12 months (up from one-fifth in 2021.)”

He said the survey also “shows that gold’s performance during a time of crisis and its role as a long-term store of value/inflation hedge are key determinants in the decisions of central banks to hold it.”

In the technology sector, demand for gold was down 2% in the second quarter from the 2021 quarter at 78 metric tons, which led to marginally lower demand for the first half of the year of 159 metric tons, compared with the first six months of 2021.

Gold Demand Trends stated that the electronics sector has continued to experience supply chain disruption and is now facing diminished consumer appetite for electronics as the cost-of-living crisis starts to bite. Both factors influenced the slight drop in demand. 

Gold prices slipped to new 2022 lows on Thursday as the U.S. dollar gained strength and amid fears that the Federal Reserve would raise intere…

“I would say that the industry is still in a relatively very strong position ... But I think that this is a warning of what we have always tal…

“Despite a shaky macroeconomic environment, demand this year has reflected gold’s status as a safe haven asset, underscored by the fact that i…