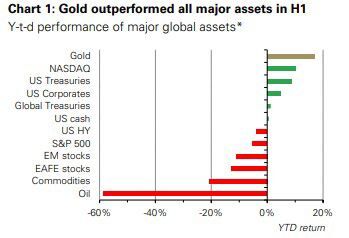 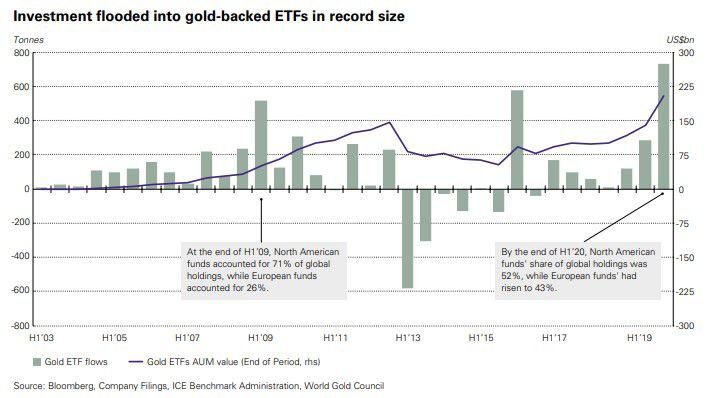 Gold prices have reached record highs, boosting investment, but overall gold demand is down due to the worldwide coronavirus pandemic.

“Gold has been generally trending positive for the past few years, but COVID-19 accelerated its performance,” Juan Carlos Artigas, head of research for the World Gold Council, said.

“The most recent price move came fast and may increase gold’s volatility in the near term. That said, the combination of a high risk and ultra-low rate environment are strong fundamental dynamics that will likely continue supporting gold investment despite weakness in consumer demand,” he said in early August.

Gold demand was down 11 percent in the second quarter at 1,015.7 metric tons as the COVID-19 pandemic influenced the gold market, severely curtailing consumer demand while supporting investments in gold, according to the World Gold Council’s Gold Demand Trends released in late July.

Gold demand for the first six months of this year was down 6 percent over the first half of 2019 at 2,076 metric tons.

Gold production from the mining industry was down, as well. Mine production fell 5 percent for the first half of this year to 1,603.6 metric tons, the lowest level since 2014, because of strict lockdowns in some parts of the world, including China, Peru, South Africa and Mexico, according to the report.

“Historically, a high price environment has allowed gold producers to invest in operations and mine more effectively. However, mine supply fell during the first half of the year given the unprecedented nature of the global pandemic and its impact on supply chains,” Artigas said in an emailed statement.

“COVID-19 created the perfect storm for gold investment as historic liquidity injections and low interest rates significantly cut the cost of carrying gold. We witnessed a surge in gold price along with record inflows into gold-backed ETFs in the first half of the year,” said Louise Street with market intelligence at the World Gold Council.

“On the contrary, consumer demand took a brutal hit from COVID-19 in the first of half of 2020. The lockdowns implemented across Asia, Europe and North America severely disrupted the consumer-focused sectors of the market, with jewelry demand falling to unprecedented low levels. Bar and coin investment slowed sharply as Asian demand masked the strong surge in Western investment,” she said in an announcement on the release of Gold Demand Trends.

Street also said that “consumer-focused sectors of the market will likely remain subdued for the next six months, but ongoing uncertainty and the threat of further waves of the pandemic mean gold’s safe haven status will appeal to investors for the foreseeable future.”

CNN Business, citing the Financial Times, reported that SPDR Gold Shares, an exchange-traded fund that holds physical gold in HSBC’s London vaults, has had to stockpile huge amounts as investors bought more gold shares, and as of early August the fund managed by State Street and the World Gold Council had 1,258 tons of gold holdings, more than the Bank of England or the Bank of Japan.

Many consumers remained under lockdown restrictions in the second quarter, and this took a toll on the gold bar and coin demand even as the gold price rallied, the World Gold Council states.

Still, demand for gold bars and coins in the United States more than quadrupled over the second quarter of last year to 13.8 metric tons as prices rose, and the July breach of gold to more than $1,900 an ounce triggered profit-taking for more robust two-day activity in July. Gold went above $2,000 in early August.

For the second quarter, central bank purchases were down 50 percent from the 2019 quarter to 115 metric tons, which Gold Demand Trends attributed to economics marked by continued lockdowns and widespread uncertainty over the ultimate impact of the impact.

Gold Demand Trends states that the electronics sector that uses gold recorded a large fall in second-quarter demand, 14 percent, to 55.6 metric tons in the second quarter. Demand for gold used in other technology applications was 33 percent lower at 8.4 metric tons.

In another World Gold Council report, an investment update states that gold broke a new high on July 28, reaching $1,940 per ounce, and investors were asking how this compares with previous highs and whether the price rally is sustainable.

Gold’s performance as of July 28 was up 27 percent for the year, outpacing all other major assets, and the World Gold Council says this is because of high uncertainty, low interest rates and positive price momentum. But the report cautions that there are reasons to believe that “we may still be early in the cycle.”

Another World Gold Council report, a mid-year outlook, states that gold outperformed global assets that include the stock market, U.S. treasuries, global treasuries, U.S. cash, and commodities in the first half of 2020, and the outlook predicts that gold investment will likely offset weak gold consumption with the downturn in gold jewelry demand.

The investment update report says that the pandemic is far from over and, more importantly, its impact on the global economy is yet to be determined.

Central banks have cut interest rates and governments have approved massive rescue packages to support their economics, “and much more may be needed,” states the World Gold Council, which also notes that these initiatives raise concerns that easy money rather than fundamentals is fueling the stock market rally.

This could result in high inflation and/or currency debasements, the update says.

The report additionally states that to put things in perspective, the gold price more than doubled from roughly $900 an ounce in early 2008 to its high more than three years later in the aftermath of the world financial crisis, but it has increased by just under 30 percent since the beginning of the pandemic.

Also, adjusting for inflation, the gold price today as of July 28 was still shy of the 2011 record and well below its Jan. 21, 1980, record high in today’s money, the update says.