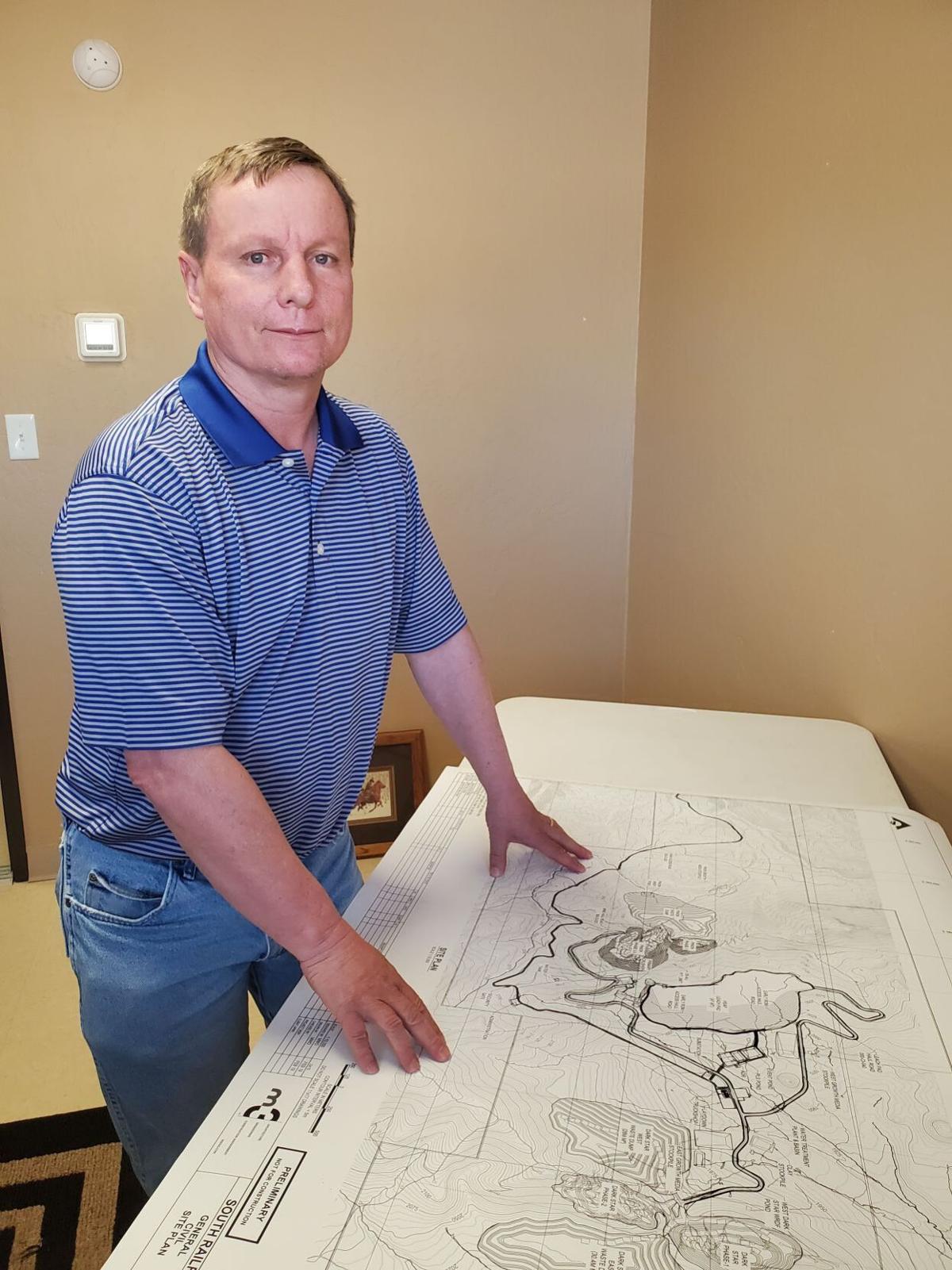 Larry Radford, chief operating officer for Gold Standard Ventures, looks over a map of the South Railroad Project that the company hopes will become an open pit gold mine south of Interstate 80 on the Carlin Trend. 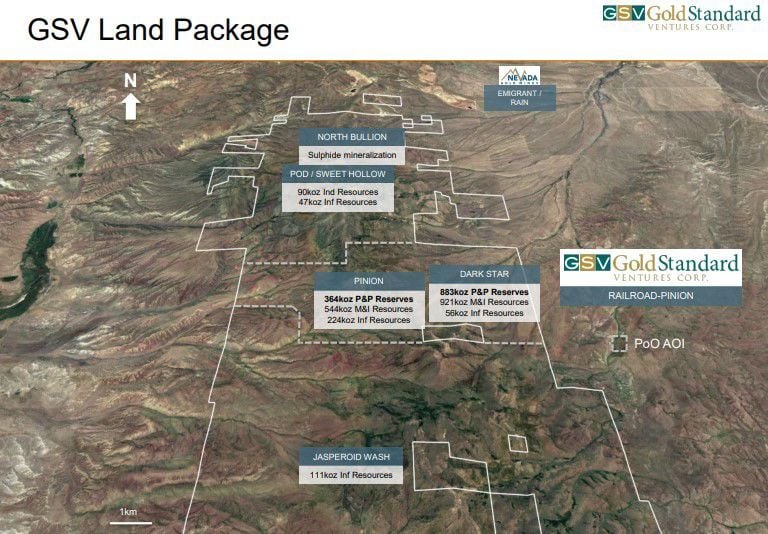 This map shows the relationship Gold Standard Ventures Corp.’s South Railroad Project to the Rain and Emigrant mines that are no longer in operation south of Interstate 80 on the Carlin Trend. 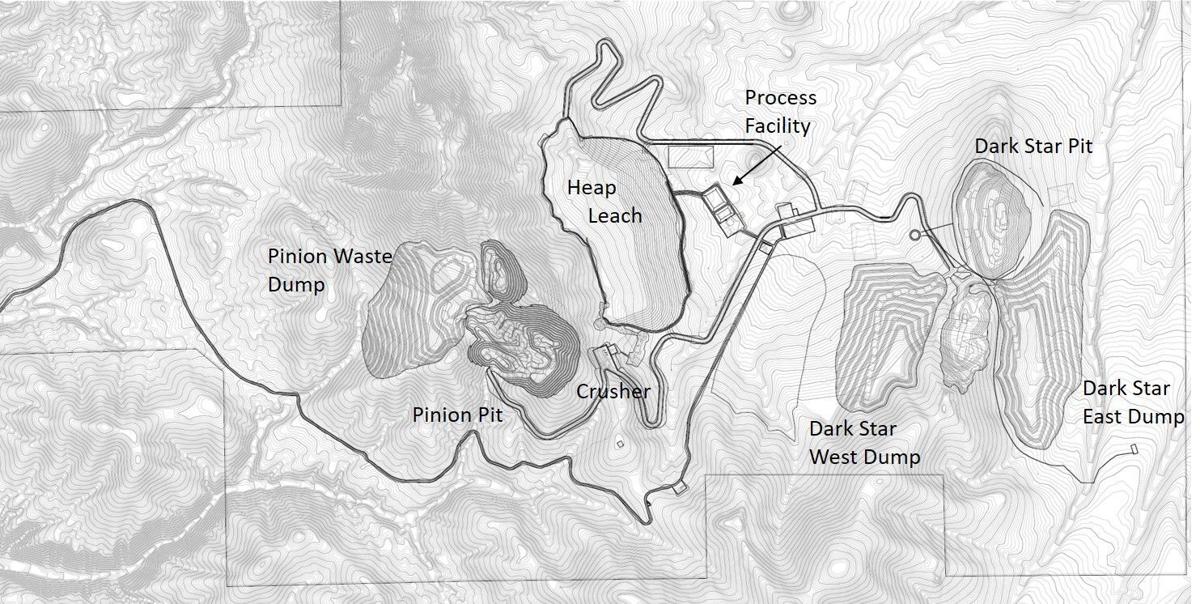 This map of Gold Standard Ventures Corp.’s South Railroad Project now in the permitting stages shows how the proposed open pit gold mine would be laid out. The company is currently completing a full feasibility study of the project.

Gold Standard Ventures Corp.’s South Railroad Project could become an open pit gold mine south of Interstate 80 on the Carlin Trend, pending the outcome of a U.S. Bureau of Land Management study.

“To me, it’s a pretty exciting time,” said Larry Radford, chief operating officer for Gold Standard, which has an office in Elko and headquarters in Vancouver. “Our goal is to be the low-cost producer on the Carlin Trend.”

Plans call for mining roughly 80,000 tons per day and feeding about 25,000 tons a day to a heap leach pad from the Dark Star deposit first, then the Pinion deposit, he said. There would be roughly 250 employees at full production.

More than 900,000 ounces of gold would be produced at South Railroad over the mine life and more than a million ounces of silver.

The BLM’s Elko District has started the environmental impact statement process for the proposed mine, and Radford said Gold Standard hopes to start development at the end of next year and produce gold in 2023, but “it’s depending upon permitting.”

The BLM’s memorandum of understanding with Elko County Commissioners for their participation in the EIS process says the mine life will be 10 years. The proposed mine is in Elko County.

Radford said the prefeasibility study for South Railroad estimated an eight-year mine life, however, the company is in the process of a full feasibility study that “we hope to publish around the end of year, depending on the turn-around of the assay labs.”

The prefeasibility study estimated annual gold production at 115,000 ounces at an all-in sustaining cost of $707 per ounce.

Gold Standard has a large land package of 51,892 acres, which Radford said is the second largest on the Carlin Trend after Nevada Gold Mines. The package is a checkerboard mix of public and private land south of NGM’s inactive Rain Mine and near the Emigrant mining property.

Mining has ended at Emigrant, where Newmont Corp. operated before the joint venture with Barrick Gold Corp. that formed NGM.

Radford said the EIS for South Railroad will include expected dewatering at the Dark Star deposit for the new mine, but the dewatering will be “quite modest compared to other mines.” The EIS also will look at the sage grouse habitat issue, he said.

The gold grades at South Railroad are “relatively low,” compared with the ore grades at underground mines in Nevada and more in line with surface mines like SSR Mining’s Marigold Mine, Radford said. “There won’t be any mill. We will use a solutions column and carbon chain” for the final gold production steps.

Minor amounts of sulfide ore could be toll milled at another company’s roaster, he said.

Mine access will require a new road. The project site is reached from Highway 278 about 15 miles south of Carlin.

Exploration continues and could extend the life of the proposed mine, with drilling beginning in mid-May for this season, including at the two proposed pit areas and on deposits quite distant from those, Radford said in a phone interview.

Gold Standard also had “a very active season in 2020, and those results are just coming now,” he said. “Probably the most exciting thing is that the Pinion pit extends to the south and is open.”

Radford said the work of assay labs in Nevada slowed during the COVID-19 pandemic and during a time of high gold prices that boosted exploration in the state, making more work for labs.

The company released an update on Dark Star on April 26 that stated the drilling continued to show that mineralization remains open to the east at the Dark Star Main deposit, and drilling designed to assess pit-wall stability and design intersected oxide mineralization along the West Fault.

“Dark Star Main remains open to the east and provides an opportunity to incrementally grow the resource base with further drilling,” said Jason Attew, president and CEO of Gold Standard in the announcement on drill results. “Any additional ounces delineated at Dark Star would be economically attractive given mineralization starts at surface and is planned to be mined early in the project life.”

Drilling on a zone of gravel east of Dark Star Main intersected gold grades representing an eroded portion of the deposit and were being evaluated for use as over-liner on the proposed heap leach pad, according to the news release.

An April 15 announcement on drilling results at the Pinion oxide gold deposit stated that decreased drill spacing at the Pinion inferred oxide resource continued to show support for converting to measured and indicated resources for the feasibility study.

“We are excited about the southern extension opportunity at Pinion,” Attew said. “The Pinion SB Zone has returned some of the highest-grade drill holes in the 40-year exploration history at Pinion. Mineralization remains open to the southeast, and we believe it represents one of the best opportunities across the property to extend mine life at the South Railroad Project.”

Gold Standard has been entirely focused on exploration, so South Railroad will be the company’s first mining operation, if approved.

He said that although the land is on the Carlin Trend, the geology is different south of Interstate 80.

Radford, who became COO in January, said a new management team is now focused on “bringing South Railroad into production,” but Gold Standard also has another exploration project in Nevada, the Lewis Project adjacent to the Phoenix Mine operated by Nevada Gold Mines south of Battle Mountain.

The Virgin Deposit at Lewis had an initial inferred mineral resource estimate of 205,827 ounces of gold and 3.54 million ounces of silver.  

The mines in northeastern Nevada are centered mostly in Eureka, Elko and White Pine counties, although much of the workforce dwells in Elko County, which has been flagged as an area with high COVID-19 transmission.

Mine Safety Olympiad returns to Elko this weekend

ELKO – Emergency skills will be put to the test by mine rescue teams as the Mine Safety Olympiad returns to Elko this week.

The U.S. does not collect royalties on those minerals in most cases. House Natural Resources Committee Chairman Raul Grijalva said the mining industry should pay at least as much as oil and gas companies, which typically pay royalties of 12.5% on the value of resources extracted from federal lands.

The judge ruled that four conservation groups failed to prove the trenches planned across a total of one-quarter acre would cause irreparable harm to sage brush that serves as critical habitat for imperiled sage grouse.

Mine reclamation heals past, preserves future

Nevada is seeing an uptick in mine and exploration projects for minerals. The state issued 261 reclamation permits in the first quarter of 2021. State law requires every one of those projects to reclaim any disturbed land when operations cease.

Judge allows Nevada tribes to join fight over lithium mine

The tribes say their ancestors were massacred in the late 1800s at the proposed Thacker Pass mine site.

Coeur also stated that the expansion project at Rochester near Lovelock is on schedule.

RAM Enterprise is celebrating its 30th anniversary in 2021.

Larry Radford, chief operating officer for Gold Standard Ventures, looks over a map of the South Railroad Project that the company hopes will become an open pit gold mine south of Interstate 80 on the Carlin Trend.

This map shows the relationship Gold Standard Ventures Corp.’s South Railroad Project to the Rain and Emigrant mines that are no longer in operation south of Interstate 80 on the Carlin Trend.

This map of Gold Standard Ventures Corp.’s South Railroad Project now in the permitting stages shows how the proposed open pit gold mine would be laid out. The company is currently completing a full feasibility study of the project.