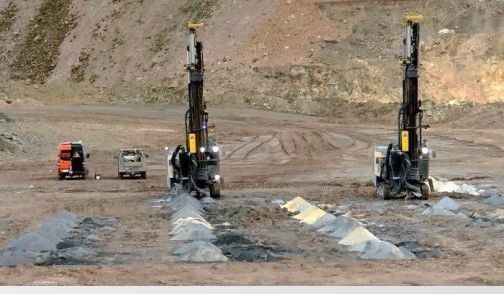 Drills operate in an open pit at the Hycroft Mine in Humboldt and Pershing counties. Hycroft stopped mining in 2015 but started back in 2019.

The Hycroft Mine, located 55 miles west of Winnemucca, is constructing a new leach pad. The first stage will have a capacity of 26.5 million tons with the ultimate pad to hold 550 million tons of ore. 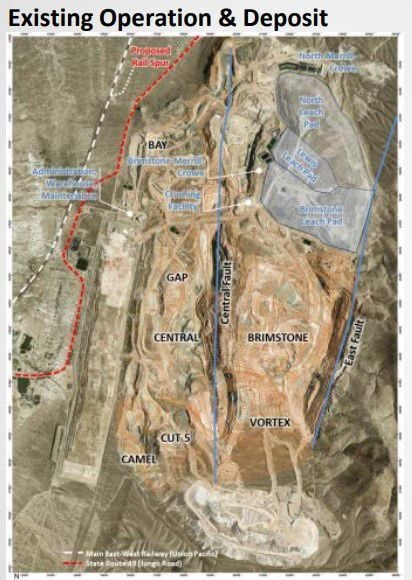 A map of the Hycroft gold and silver mine located 55 miles west of Winnemucca in Humboldt and Pershing counties. Hycroft resumed operations last year.

Hycroft Mine is pioneering new technology, and this sulfide oxidation process has “proven to be quite successful,” said Larry Giegerich, vice president of operations at the gold and silver mine 55 miles west of Winnemucca.

“What we’re doing now is focusing all of our mining on the sulfide portion of the deposit,” he said.

The ability to process sulfide ores at Hycroft increases the mine life by roughly 90 percent, Giegerich said, and the mine life is now at 34 years.

With the patent-pending sulfide oxidation process that was developed by Hycroft and M3 Technology, ore is placed on a leach pad and an alkali environment is created with soda ash, so there is no need for a large mill or processing plant, he said.

He said he and staff are in the process of revising a five-year plan for Hycroft, which has 204 employees but plans to be at 275 employees by the end of the year.

“We’re building a dream team” of people at the mine, Giegerich said. “The culture is fantastic. People are very upbeat.”

Hycroft Mining Corp. sold its equity interests and assets to Mudrick, and Mudrick paid or assumed all the Hycroft debts and liabilities, according to the announcement. The company’s stockholders received shares of the new company.

Once the deal closed following financial arrangements, the new Hycroft started with more than $50 million in cash, according to the announcement.

Hycroft Mining Holding Corp. remains headquartered in Denver. The new company operates the Hycroft Mine, which was restarted in 2019 after Allied Nevada Corp. went into Chapter 11 bankruptcy in July 2015 and stopped mining. Processing ore continued from leaching.

Allied Nevada emerged from bankruptcy in October 2015 and changed its name to Hycroft Mining Corp.

Funds received from the transaction also paved the way for Hycroft to expand its existing mining fleet. Geigerich said the mine has a dozen 230-ton haul trucks now, three large Hitachi excavators and backhoes and loaders.

He said the current high gold prices are helping with cash flow, as well as the high silver prices. Gold was at roughly $2,054 per ounce on Aug. 6, for example, and silver was above $28 per ounce.

Tracey Thom, vice president of investor relations and corporate communications, said the higher silver prices are “pretty significant to this mine.”

Mining currently is in the Central Pit, and the ore is crushed and then placed on leach pads while the new pad is under construction. The leached solution goes to the Brimstone Merrill Crowe processing plant at this point but once production steps up, the newer plant built in 2012 will be back in use.

Thom said the mine had to “Frankenstein what we had” at the site to begin testing the new sulfide oxidation process after the mine reopened.

Hycroft is constructing a new leach pad that should be ready in the fourth quarter, and Geigerich said his focus is on increasing mining from 1.5 million tons of material per month to 3 million tons in a month by next year. A presentation on the company website states that the new pad will be constructed in stages, with the first stage providing 26.5 million-ton capacity.

The rail spur that was planned before the 2015 shutdown is still probable, said Thom. She said the spur would allow Hycroft to ship in the soda ash, so there would not be big trucks hauling the ash on Jumbo Road.

“The rail spur will be constructed in a couple of years,” she said in a joint phone interview with Giegerich in late July.

Meanwhile, Hycroft is operating under COVID-19 restrictions, and the steps taken included adding one more bus to transport workers for social distancing, requiring masks and sanitizing lunchrooms and the buses.

Giegerich said he also encourages staff to call into meetings when they can, rather than attend in person.

There was one official COVID-19 case among employees, and that led to the quarantine of others possibly exposed to the coronavirus, he said.

Hycroft completed a heap leaching feasibility study on July 31 of last year that evaluated the sulfide oxidation process and updated mineral resources, as well as looking at the finances of a full-scale mining operation again at the mine.

Thom said the study went public this year, however, when Hycroft’s ownership changed and the company began publicly trading shares.

Hycroft began preparations for restarting the mine in January 2019, and mining began in April 2019, according to the study. Production began in August 2019. Ore was placed on new 50,000-ton test pads to learn more about the oxidation process.

The report states that an earlier closure of Hycroft happened when the mine was placed on care and maintenance in December 1998 after gold prices plunged to below $300 an ounce, but there was ore processing through 2004.

The study also says that Allied Nevada reactivated the mine in September 2007, after the Nevada-based holdings of Vista were spun out into Allied Nevada.

According to the study, modern mining at Hycroft began in 1983 with a small leaching operation known as the Lewis Mine, which was followed by production from the Crofoot property and the Bay, South Central, Boneyard, Gap, Cut 4 and Brimstone open pits.

Historic mining in the Hycroft area began in the late 1800s for sulfur, and the sulfur mining continued sporadically from 1900 to 1950, according to the study. Silver was mined from 1908 to 1912 in the area, too, and then in World War I, veins of nearly pure alunite were mined in the southern part of this Sulfur District.

The Hycroft property includes 30 private parcels combining for roughly 1,912 acres and 3,247 unpatented mining claims encompassing about 68,759 acres, according to the feasibility study.

NGM partners with department of education on digital learning

CARSON CITY — Nevada Gold Mines is investing $2.2 million in digital education in partnership with Discovery Education and the Nevada Departme…

More than 50 killed at collapsed gold mine

KINSHASA, Congo (AP) — More than 50 people are dead after landslides caused the collapse of three artisanal gold mines near the city of Kamitu…

Mine south of Carlin will be first to produce critical mineral

Nevada Copper back in production

Nevada Copper Corp. is on track toward full copper production from the Pumpkin Hollow Mine at Yerington after a COVID-19 hiatus for company em…

Drills operate in an open pit at the Hycroft Mine in Humboldt and Pershing counties. Hycroft stopped mining in 2015 but started back in 2019.

The Hycroft Mine, located 55 miles west of Winnemucca, is constructing a new leach pad. The first stage will have a capacity of 26.5 million tons with the ultimate pad to hold 550 million tons of ore.

A map of the Hycroft gold and silver mine located 55 miles west of Winnemucca in Humboldt and Pershing counties. Hycroft resumed operations last year.