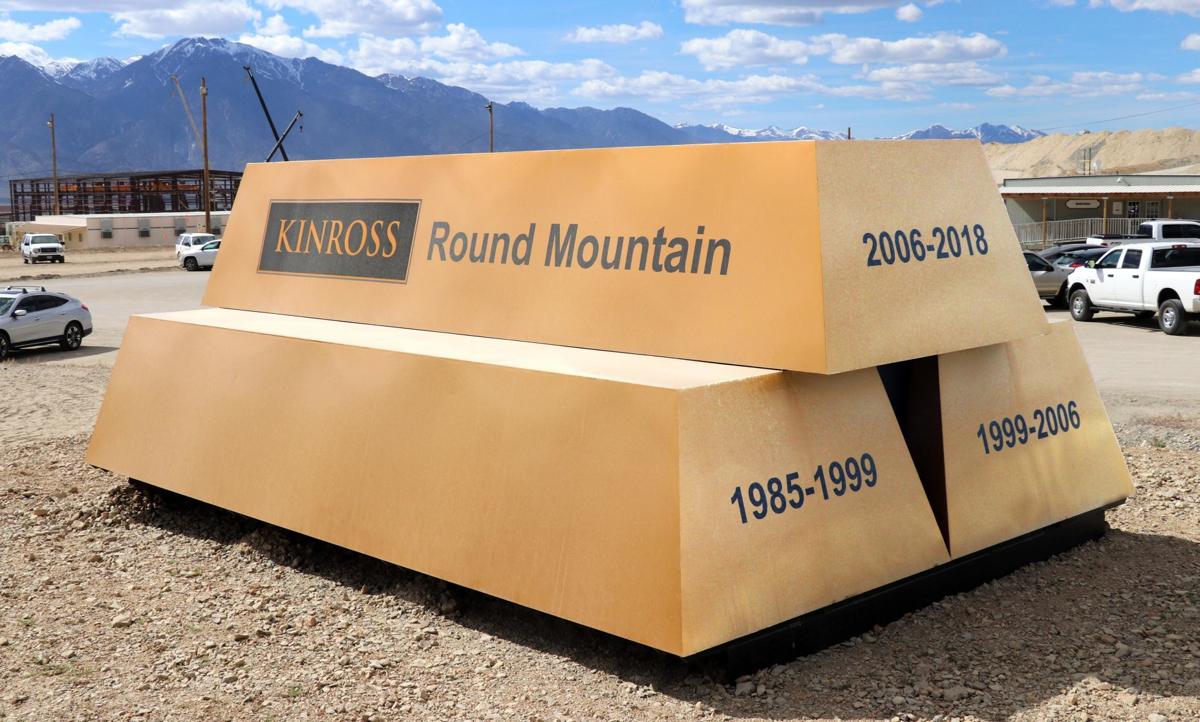 In 2018, the Round Mountain mine celebrated pouring its 15 millionth ounce of gold since 1985. The three giant gold bars sitting outside the Round Mountain offices depict what 15 million ounces of gold would look like if it was all poured into three five-million-ounce bars.

Kinross also reported all its mines remained in operation during the coronavirus pandemic.

The Toronto-based company stated in its earnings report that the mines were not materially impacted. However, operations could be challenged over time given the future global impacts of a prolonged crisis.

“During the quarter, we focused on protecting the health and well-being of our employees and communities against the spread of COVID-19 while maintaining the continuity of our operations in a safe manner,” Kinross President and Chief Executive Officer J. Paul Rollinson said.

He said in the earnings announcement that Kinross “also took steps to further strengthen our financial position against the economic and business uncertainties caused by the global health crisis.”

The company committed $5.3 million to support host governments and communities in their response to COVID-19, the earnings report states, and continues efforts to protect workers by following guidelines for screening, sanitation and social distancing.

Paul Tomory, executive vice president and chief technical officer for Kinross, said in the earnings teleconference that the crew buses that go to the mine from Elko used to hold 55 people.

“Now you can only do 12, so if Nevada doesn’t relax some of the restrictions, then yes, we’ll start to have these little impacts,” Tomory said. “We characterize them as paper cuts.”

He said the paper cuts “add up to something that could be a little bit more material, but as of right now, though we have stresses on productivity across the company, we are not terribly worried about them at this stage.”

The company committed $5.3 million to support host governments and communities in their response to COVID-19, the earnings report states.

Kinross also stated it is working to sustain its supply chain and maintain access to refining capacity and has initiated a process to increase stocks of key consumables to at least three months on hand.

Kinross reported that gold production at Round Mountain totaled 84,465 ounces in the quarter, compared with 85,135 ounces in the 2019 quarter. Cost of sales per ounce sold was lower in the 2020 quarter than the 2019 quarter mainly due to the focus on capital stripping during the quarter and lower milling supplies, according to the earnings report.

At Bald Mountain, production was lower mostly because of fewer ounces recovered from the leach pads, according to Kinross. Bald Mountain produced 42,087 ounces of gold in the 2020 quarter, down from 47,255 in the 2019 quarter. Costs of sales were higher at Bald Mountain mainly due to higher operating waste mined, higher labor and contractor costs, and the impacts from COVID-19.

Companywide, Kinross produced 567,327 ounces of gold in the quarter, down from 606,031 ounces in the first quarter of 2019, and the company attributed the drop to lower production at Paracatu in Brazil, Kupol in Russia and Chirano in Ghana and the end of production at Maricunga in Chile.

The average realized gold price was $1,581 per ounce, compared with $1,304 per ounce in the first quarter of 2019, according to the earnings report.

Kinross reported that although the pandemic didn’t impact Kinross operations in the first quarter, 2020 full-year production guidance was withdrawn, and the company said this was due to the significant effect of the pandemic on the world economy, the implications of government-mandated constraints on financial, commercial and business activities and the potential for future business disruptions and global health impacts.

Favorable fuel prices and foreign exchange rates were expected to offset some of the incremental costs resulting from the company’s contingency measures during the pandemic, Kinross stated.

“Looking forward, we are confident that our commitment to health and safety, our risk mitigation plans, our financial and operational strengths, and our positive relationships with our host governments put us in a strong position to effectively manage through this challenging time,” Rollinson said. “We have built a strong foundation, expect to continue generating strong cash flow, and offer an exciting future and a compelling value opportunity for our shareholders.”

Round Mountain expansion on track for Q2 completion

In 2018, the Round Mountain mine celebrated pouring its 15 millionth ounce of gold since 1985. The three giant gold bars sitting outside the Round Mountain offices depict what 15 million ounces of gold would look like if it was all poured into three five-million-ounce bars.