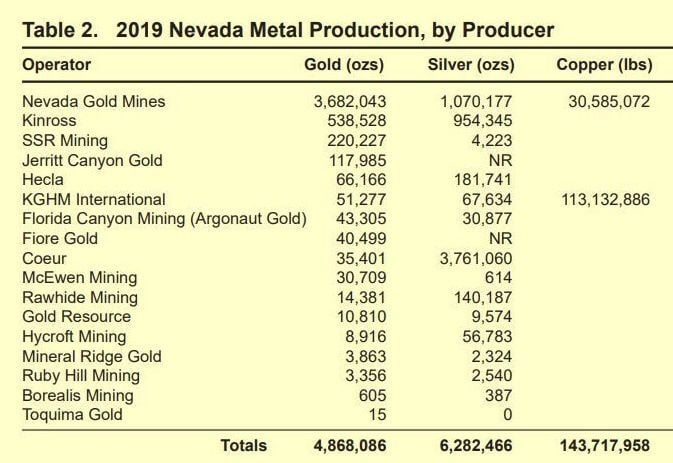 Statistics on metal production in Nevada are published annually by the Nevada Bureau of Mines and Geology. 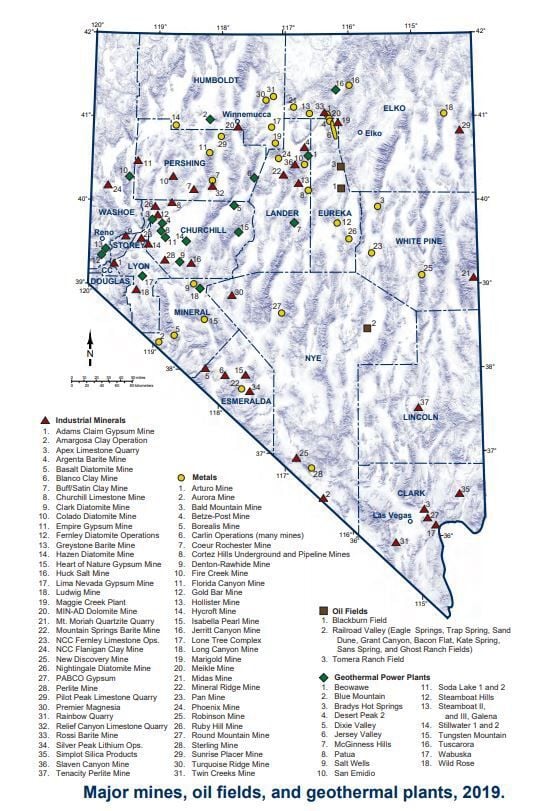 Major Mines of Nevada 2019 published by the Nevada Bureau of Mines and Geology is now available to the public.

RENO — Every year since 1988, the Nevada Bureau of Mines and Geology has published an official report on the Silver State’s mining operations. Known as “Major Mines of Nevada,” the 2019 edition of the book is now available.

“Suppliers, vendors and mining operators use this information for increasing potential sales and service,” Lucia Patterson of the Division of Minerals said Wednesday. “The publication represents an annual snapshot of the minerals industry, which documents commodity production, employment and value generated by the mineral industry.”

As reported in the publication, Nevada’s mining industry recorded approximately $8.1 billion in total value of all commodities in 2019, representing a 3.8 percent decrease from the $8.42 billion value recorded in 2018. Nearly 85 percent of all value was driven by gold and silver, which contributed over $7.1 billion, based on the actual gross proceeds reported to the Nevada Department of taxation.

According to Kitco Metals Inc., the average prices for gold and silver in 2019 were $1,392.60 and $16.21 per troy ounce. Nevada also led the nation in the 2019 production of gold, barite, lithium compounds and magnesium compounds.

According to the Nevada Department of Employment, Training and Rehabilitation, the Nevada minerals industry, including support activities and oil and gas extraction, directly employed an average of 14,887 people in 2019. The average yearly pay for mineral industry employees during this time was $105,862, the third highest average private employment sector in the state, behind company management and utilities.

Patterson said that under Nevada Revised Statute 513, the division is required to collect and publish the information on the current status of the minerals industry in the state.

Significant additions to the map of the state’s major mines are Isabella Pearl Mine in Mineral County and Gold Bar Mine in Eureka County.

The most significant recent mine to close is the barium-barite Big Ledge Mine located in Elko County, which ceased mining operations in January 2017, Patterson said.

Patterson said a mine being open or closed is not always so black and white, especially relating to smaller mining operations.

“Many small industrial mines have intermittent production and may report no production one year, but then have several years of production without actually being closed,” she said. “Other mines may produce from previously mined stockpiles to fulfill current orders, so mine amounts might be zero, but they are processing or shipping products.”

Close and open isn’t really a switch type of action, especially for smaller operations. While the mine might be active, actual production might be out a few years, due to permitting or drastic changes in commodity price or simply getting the mine fully up and going. There were three mines that opened in 2019.

Another recent addition for the Division of Minerals is a new interactive web map that showcases all reported mine production since 1987.

“I am especially excited to get that done,” she added.

Major mines information can be viewed online at http://minerals.nv.gov/Programs/Mining/Mining_Forms/

For a hard copy of Major Mines of Nevada 2019, contact the Division of Minerals at http://minerals.nv.gov/

ANCHORAGE, Alaska (AP) — A search is underway in Alaska for two men who went missing after their gold mining boat overturned.

TORONTO – Barrick Gold Corp. announced Wednesday that wholly-owned subsidiaries of Barrick and Bullfrog Gold Corp. have entered into a definit…

TORONTO – Barrick Gold Corp. announced Wednesday that wholly-owned subsidiaries of Barrick and Bullfrog Gold Corp. have entered into a definit…

DENVER-- Hycroft Mining Holding Corporation recently announced the closing of its previously announced public offering of 9,583,334 units at a…

Cortez Underground is actually approaching 900 days without a lost-time accident.

VANCOUVER – Fiore Gold Ltd. announced production for the fiscal year ending Sept. 30 of 46,031 ounces of gold from its Pan Mine in White Pine …

WINNIPEG, MANITOBA—Winston Gold Corp. said in a recent statement that development drifting is advancing along three vein headings; the Paralle…

Statistics on metal production in Nevada are published annually by the Nevada Bureau of Mines and Geology.

Major Mines of Nevada 2019 published by the Nevada Bureau of Mines and Geology is now available to the public.