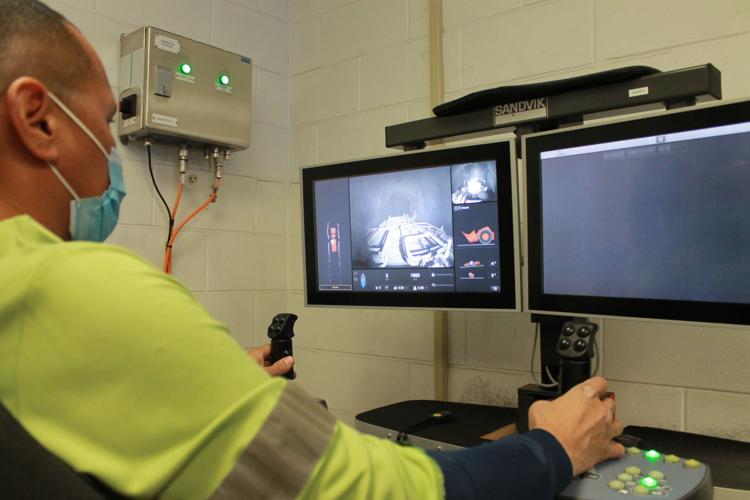 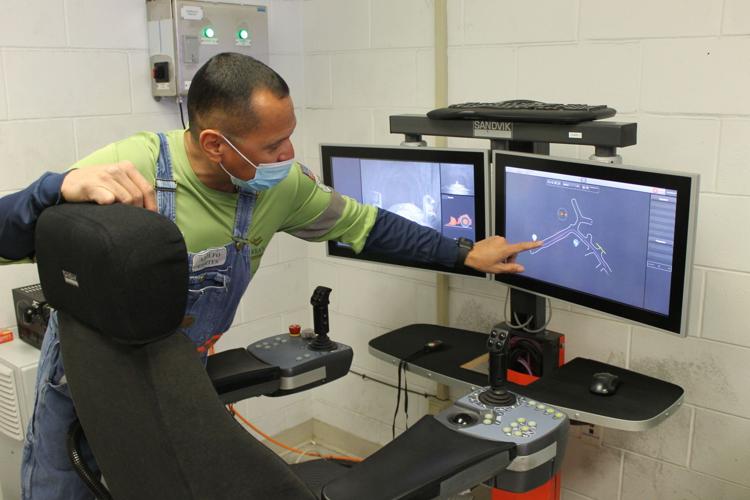 Nevada Gold Mines equipment operator Adolfo Cortez points out a route assigned to an underground autonomous loader that can be operated from an aboveground office at the Cortez Hills underground mine. 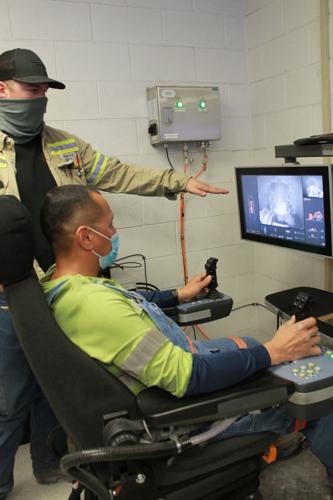 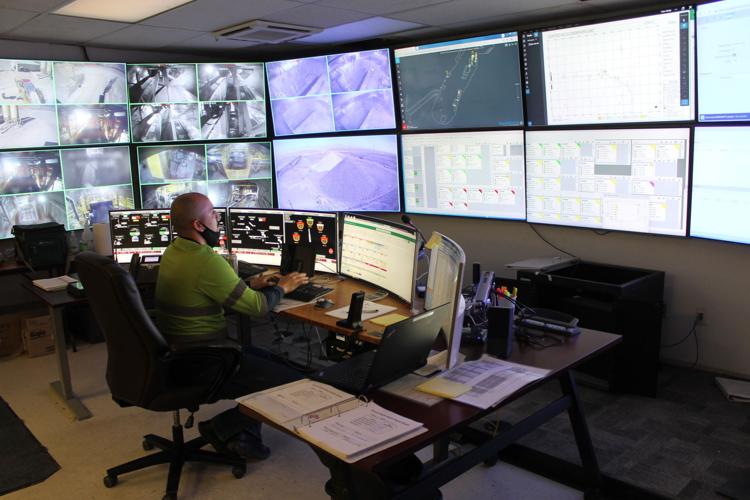 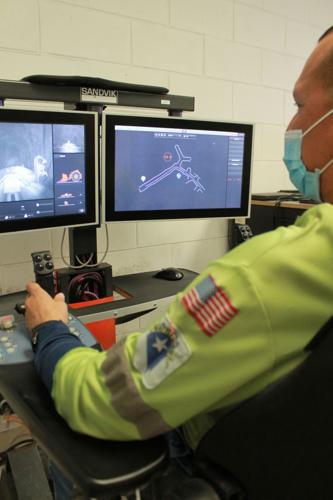 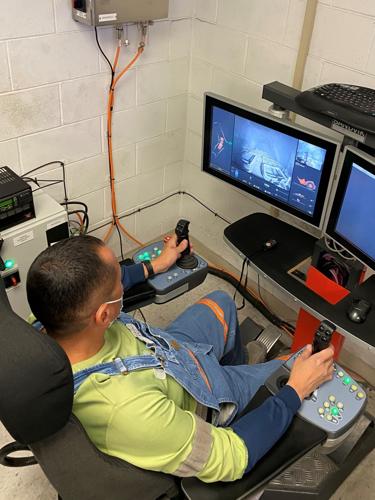 From an above-ground office at Nevada Gold Mines’ Cortez Hills gold mine, equipment operator Adolfo Cortez remotely controls an autonomous underground loader using an array of buttons and joysticks. In front of the seat, which looks like a gaming chair, a pair of monitors shows the truck dashboard with live statistics, a view out the windshield into a dark drift and a map of the operating area.

The process of autonomous mining at the site involves blasting to create a stope, or underground excavation, then setting up a loader in autonomous mode to scoop out the mineral-rich dirt in a 17-ton capacity bucket and tram the ore to a muck bay or ore pass.

For a setup in early August, an operator controlled the scooping and tramming through the horizontal underground opening, but the loaders can be programmed to do both actions automatically.

The Sandvik autonomous loader in operation is one of three, nine-yard loaders that has been working at the Cortez Hills underground mine since 2017, and the company is soon planning to deploy a fourth.

Cortez Hills is an underground mine that is part of the Cortez Complex in the Crescent Valley area in northeastern Nevada. The complex also contains three open pit mines, a second underground mine in the permitting stage, and processing facilities to make up NGM’s second-largest producing operation in its portfolio.

Some of the mines now under NGM, which formed as a joint venture between Barrick Gold Corp. and Newmont Corp. in 2019, have been using autonomous mining equipment underground since 2017. The mine operator continues to evaluate emerging autonomous technology to determine applicability in its portfolio—the largest gold-mining complex in the world.

In addition to working with Sandvik, NGM partners with myriad vendors including Caterpillar, Hard-Line and RTC Global, with equipment varying depending on the needs and complexities of each site.

Although autonomous technology is used on a large scale for some mine sites in other countries—namely surface mines in Western Australia—NGM sites tend to have complex mine plans governing steep and narrow pits mined in all kinds of weather with all kinds of equipment. Those conditions complicate deployment of large-scale autonomous mining fleets, said Matthew Majors, superintendent for projects at Cortez Hills.

If he finds a good fit, he pitches a business case to NGM.

The pitch would outline how the technology benefits safety and production, while balancing its effect on employees and infrastructure.

One of the main benefits of using autonomous equipment is its ability to go where it is unsafe for people. At the Cortez Hills underground mine, the autonomous loaders function under unsupported ground, moving ore to safer locations where in-person drivers can take over.

“It is significantly safer because it completely removes the operator from hazards,” said Anita Percy, Cortez Hills mine general manager. “We still have people that go and do inspections and make sure the machine is in good condition, but not having the operator at risk of rock fall or anything like that or at risk of being near a mobile piece of machinery is the main benefit.”

When the autonomous loader is running, safety gates block off the level so no employees can be near the equipment. Sensors cause the machine to shut down if anyone passes by, “so the machine itself is operating completely isolated,” Percy said.

Before deploying autonomous loaders, NGM used a remote system that allowed employees to run the trucks from the underground level using a line-of-sight method, much like driving a remote-control car.

The former process required operators to have the equipment in sight at all times, and for them to get in and out of their trucks repeatedly as they scooped remotely then trammed manually. That might require getting on and off the loader about 120 times during a shift, said Josh Jones, Cortez Hills operations superintendent.

“Because in these stopes, it’s unsupported ground, which is the whole idea behind this auto system,” said Marcus Dietz, network lead. “[Employees] are out of harm’s way when they’re running from here. It’s just the safe way to go about it.”

When asked if he missed anything about working underground, Cortez didn’t hesitate:

“No. This is a good gig. You’d be down there in the dust and heat, jumping out of the loader after every bucket versus being up here,” he said. “It’s easier on us. It’s easier on the equipment, and it’s a lot more productive. It’s nonstop. It’s go, go, go. The motor doesn’t have to be shut off or anything.”

The autonomous loading system increases productivity by streamlining processes and continuing operations when people cannot be present, such as during blasting or shift changes.

“Being able to operate 24/7 [means] we can get an extra hour every shift of operations,” Percy said.

That equates to 500 to 600 more tons of ore moved per shift change, depending on muck bay or ore pass capacity, Jones said.

At first, the loaders’ smooth operations made them look slow, so team members wondered if the trucks were really working more efficiently. They put the loaders to the test.

“The consistency of it seems slower, but because you don’t have the off and on, off and on, every trip, you gain scoops,” Jones said. “We timed it once … it was something like 12 scoops an hour in that particular spot where it was a short distance [to tram].”

Before any autonomous equipment could run underground, NGM had to install a wireless internet network with multiple access points beneath the surface. The loader connects to the network underground so it can be run from above.

“I would say the hardest aspect that we had when we first started this underground was doing Wi-Fi underground,” said Nathan Conk, general supervisor for electrical and network. “That was the biggest struggle underground, trying to get the correct signals in the correct places so that the loader can understand that when it leaves this area, it needs to attach to a different [access point], and tuning that was probably our biggest struggle at the beginning, understanding how to hand that off underground. On the surface, you have internet all over the place. Underground you’re stuck in a box, basically, so the Wi-Fi only travels so far.”

Yet once it’s set up, having internet underground allows for other technological advancements. NGM equips underground employees with tablets for communication and tracking tags that allow faster response time if someone has a problem.

“Because now we have Wi-Fi, we have the ability to use some other technologies,” Majors said. “We’ve elevated from the brass board to an actual tracking of people where they are spread out across their mine.”

When deploying autonomous technology, an important consideration is how it will affect employees. Majors looks into what training is required and how people can be taught additional skills to fill the requirements.

Management said involving employees in any technology rollout is crucial for gaining buy-in. When the company implemented autonomous technology at Arturo and Cortez four years ago, employees were running it on the first day, Majors said. “We develop and coach our people along with the system.”

Autonomous technology tends to make employees nervous at first because they worry their jobs will be replaced with equipment. Yet NGM is expanding its teams while using autonomous equipment.

“NGM is always in recruitment mode,” said Percy, “We need a whole lot of people going forward. This helps us ‘future proof’ in terms of people so we can train people up in a slightly safer area so they do less harm to themselves and others, so we can have less experienced people come in and do some of these tasks.”

Autonomous technology also creates new jobs for mines, as the need for instrumentation, programming and Wi-Fi opens up positions that are not traditionally mining jobs.

“We have different work,” Majors said. “But we are across-the-board recruiting at every site at every mine.”

In August, one of the loaders could not operate because an earlier blast knocked out an underground internet access point. The access point had to be repaired before the loader could resume operation from above ground.

Other challenges include repairing equipment if it makes contact with the ribs or other equipment, or re-establishing connectivity for the safety gates if the system is compromised.

Additionally, the process of shutting down a level around an autonomous loader requires careful planning so it does not interrupt other important mining processes.

“With us that is a challenge,” Jones said. “You have to try and mine and use our auto gear in the same area, so it’s a lot of effort put into planning to make that happen.”

Along with benefits in safety and production, autonomous technology over the past 10 years has created opportunities at mines’ processing plants.

“On the topic of automation, that’s where we’ve had the most success,” Majors said.

Going forward, NGM leaders hope to maximize the automation technology that is available with the equipment already at the mines.

At Cortez Hills underground, that means getting the autonomous loaders to scoop ore and tram automatically.

“Later on in the mine life, there are going to be places that we design so that it can actually scoop and dump itself into a pass,” Jones said. “That’s the ultimate goal here.”

Throughout the NGM portfolio, that means deploying new autonomous technology where it makes sense. All the autonomous equipment is underground for now, but NGM continues to evaluate its usefulness for surface operations.

If the case can be made, and the people and processes and technologies can support it,” Majors said, “we’re looking at trying to use it.”  

“This digital transformation project will rescue Elko from the bottom of the barrel to the top shelf,” Keener said.

Barrick Gold Corp. has agreed to pay Bullion Monarch Mining Inc. $25 million in a settlement reached Feb. 18 over a claim of non-payment of ro…

As equipment does the work it was designed to do, it also generates heat, and that can cause all kinds of problems if that heat accumulates. F…

BUTTE, Mont. — Steve McGrath stood in an empty lot a block from his home watching for dust.

Nevada Gold Mines equipment operator Adolfo Cortez points out a route assigned to an underground autonomous loader that can be operated from an aboveground office at the Cortez Hills underground mine.