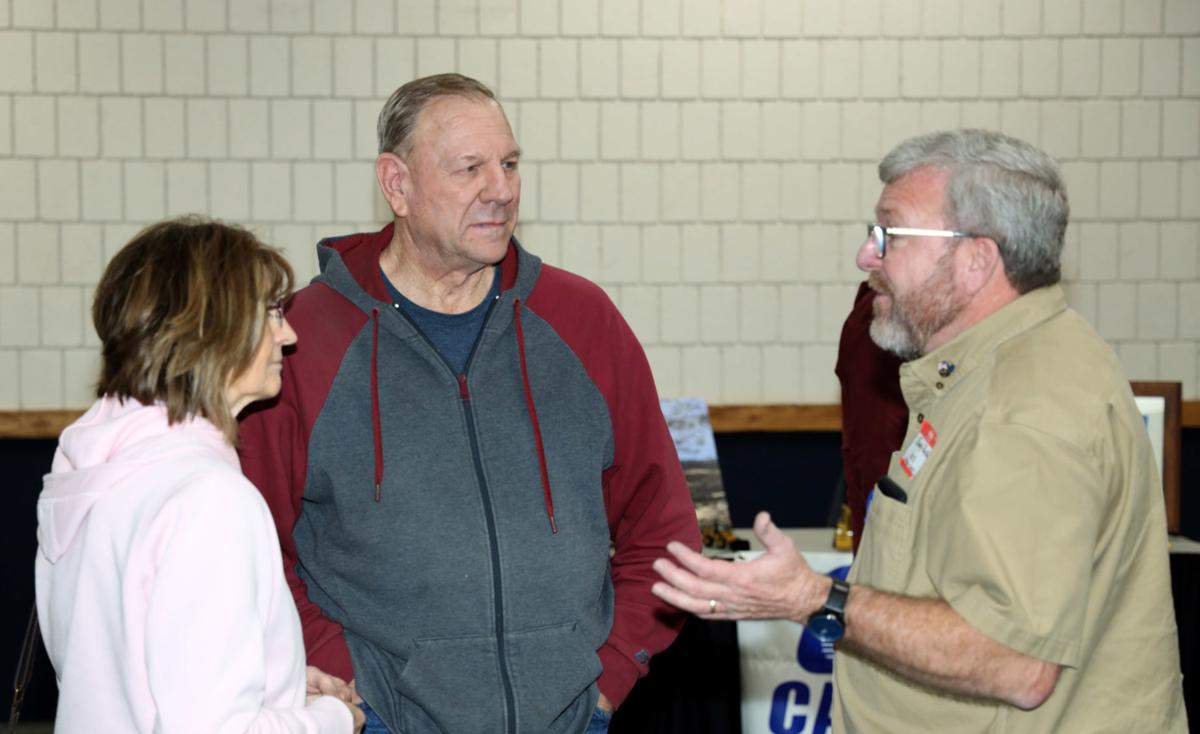 Barry Baker, right, an organizer with the Operating Engineers Local 3 union, talks with Lorri and Jim Sauer at the Miners' Rights Expo hosted Friday by the union at the Elko Convention Center. Jim Sauer works at the Nevada Gold Mines Exodus Mine in the Carlin Trend. 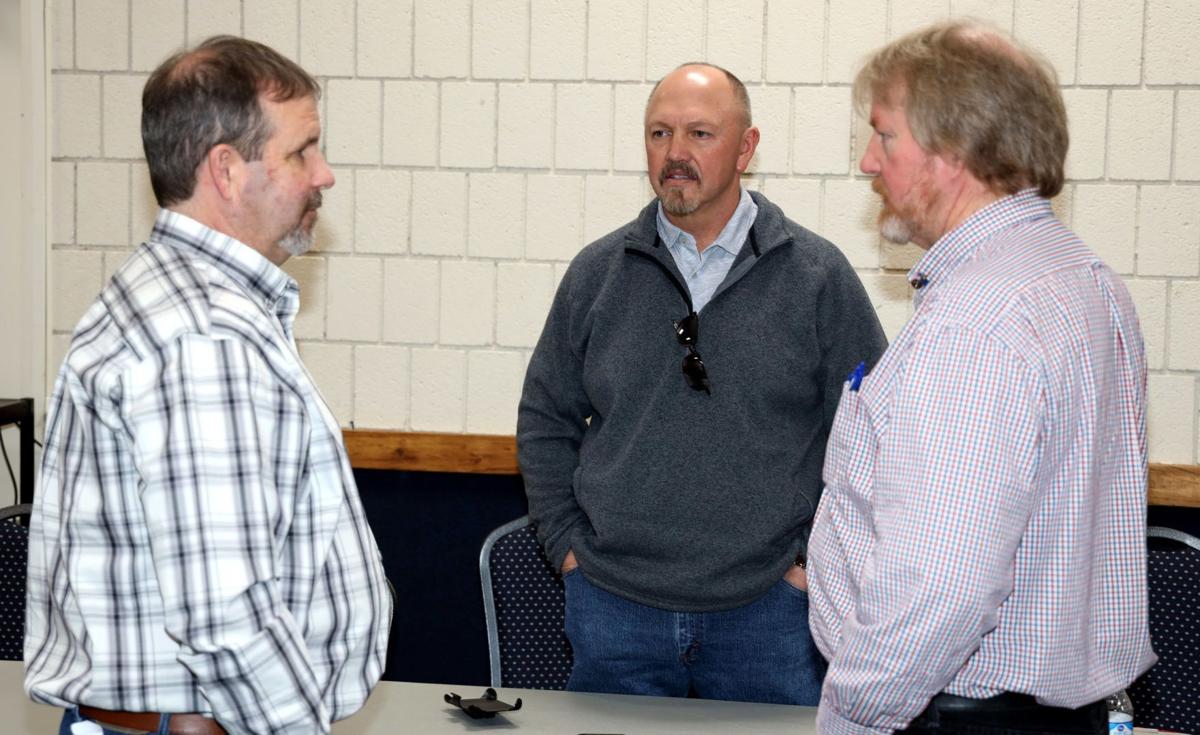 Is Nevada Gold Mines trying to shut down the union that has represented the Newmont miners in the Carlin trend?

Nevada Gold Mines has said it wants all the former Barrick and Newmont workers at the mines in the Carlin trend to vote on whether they want to be in the union, and the company has asked the National Labor Relations Board to proceed with a vote. The Operating Engineers Local 3 union, on the other hand, has said NGM is taking steps to prevent a fair and informed vote.

The OE3 union has represented the Newmont workers at the mines north of Carlin for about 50 years. The union finalized a three-year collective bargaining agreement with Newmont for the approximately 1,300 employees at the Carlin mines in January 2019. In the following months, Newmont and Barrick Gold Corp. agreed to a joint venture for all their Nevada mines. That put the status of the union at the Carlin mines in question.

In an interview on Jan. 31, Nevada Gold Mines Executive Managing Director Greg Walker said as the joint venture progressed it became clear that it was not tenable to have some union and some non-union workers at the combined Barrick and Newmont mines in the Carlin trend. He also said the former Barrick workers should not be forced to join the union without a say in the matter.

Nevada Gold Mines provided a statement on Feb. 7 saying, “At Nevada Gold Mines, our values include respecting each other as peers and communicating honestly, transparently, and in a way that enables our employees to voice their opinions and have a choice.

“NGM representatives have met with the IUOE Local 3 leadership repeatedly to offer an election for the employees working side-by-side at the Carlin integrated operations to decide whether they want to be represented by a union or participate in a more direct employee engagement structure. Our offer of a vote still stands and we want to protect our employees’ right to choose.

“It is clear to NGM that the union is not going to agree to a vote, so we petitioned the National Labor Relations Board to conduct a vote. We believe this was the best route for our employees to have freedom of choice.”

OE3 Nevada District Representative Scott Fullerton said on Feb. 7, “They filed a petition for a vote, but we’ve got other things that are out there right now that we feel need to be resolved before that is even a consideration.”

The union has filed an Unfair Labor Practice charge with the NLRB against NGM “for the company’s failure to recognize the bargaining representative chosen by these workers, or the contract for these workers that the company had previously agreed to adopt,” the union said in a press release.

Walker said in the Jan. 31 interview that he personally does not have a preference on whether the employees should join the union. Representatives of the union, however, have said there is a variety of evidence that Nevada Gold Mines prefers that the union representation comes to an end.

On Feb. 7 Operating Engineers Local 3 held a Miners’ Rights Expo at the Elko Convention Center, and some people came out to visit with union representatives and with the variety of employers and vendors who had set up tables.

“How do you have a fair election if the union side can’t even get access to the people?” OE3 Organizing Director Bruce Noel said in an interview during the Expo. “It’s impossible to have a fair election. The fact that they have gone out and done their best to try to educate their supervisors and their leadership people on how to talk people out of being union, but yet we’re not even allowed access to the people in the parking lots after they get off work. Those are just little things, but those little things become pretty significant if you’re going to try to have a vote and a fair vote.”

Noel said they have heard from workers at the mines and from others that people have been brought in to coach supervisors on how to speak to the workforce without creating unfair labor practice charges while discouraging them from being supportive of the union.

Fullerton said the day after he read the interview with Walker, he and others were talking with people in a Nevada Gold Mines parking lot when the police were called in.

“These people were waiting to go to work, and it was on a parking lot that we had visited repeatedly throughout the years to talk to our members,” Fullerton said. “It wasn’t that they just restricted us from talking to other people, they restricted us from talking to our members. … We had the cops called on us. Once they showed up we did what we were supposed to do, we removed ourselves from the property. But the question is, how do we get fair representation if you’re forcefully removing me from the access areas that we had continually had throughout the years to speak to these people?”

Noel said if Nevada Gold Mines does not care whether or not the workers join the union, “then why wouldn’t they provide the information when we sent out the original information request, and give us all the information about all the people, where they live, how to get a hold of them, so that we could actually give them the information that we think is important to them to make a legitimate, honest decision about what is best for the future?”

Noel said that although only the workers at the Newmont mines in the Carlin Trend have been members of the union, the wage and benefit packages that have been negotiated by the union through the years have affected everyone in the area.

“For 50 years you’ve had this, what I would say is a trend-setting agreement out here, that all the mines typically follow because if you get too far off that path, you can’t recruit people,” Noel said.

He said when they see NGM taking various actions which put the union at a disadvantage, “we see it for what it really is, and it’s an attempt to try to get the union out, so that they can control the whole environment.”

“If you look at the elements in a project in the gold mining industry, the easiest place to get concessions is labor,” Noel said. “And it’s really the only place. Fuel is going to cost what it costs, maintenance is going to cost what it costs, the equipment is going to cost what it costs. … Labor costs is the only variable. So if you can reduce labor costs, ultimately you earn profits. … That’s what they’re doing. They’re getting the union out so that they can control the only dynamics where they can save more money. And I’m not going to say that next week they’re going to make changes. But they will make changes as needed to make sure that they maintain their profit margins. That’s what this is about. It’s about taking away the worker’s right to argue about what their fair share is. And once they’ve gotten the union out of there, then at that point in time they will do whatever they want to do whenever they want to do it, and the workers won’t have any kind of recourse.”

Noel said he has been hearing complaints from Nevada Gold Mines workers about changes in benefits. He said he believes the biggest change is the elimination of Newmont’s defined benefit pension plan. The pension plan was included in the union’s collective bargaining agreement for the Carlin workers. Barrick employees have been using 401(k) plans for their retirement, and now former Newmont employees at NGM are also using 401(k) plans.

“That’s removing the company’s long-term liability for pension benefits,” Noel said. “That’s another characteristic of a company who’s trying to create a situation where they’re in control of everything. … Now it’s all on the workers … if you don’t take care of your retirement, that’s on you, and the company holds no long-term liability.”

Many people may feel that the union issues going on now are something that will only affect some workers at the Carlin mines. Noel believes, however, that if the union goes away there could be long-term effects on the entire community.

“What happens when they control everything, they can migrate people’s pay to the market standards that they want to adhere to for their profit margins,” Noel said. “Every single business will be impacted. People won’t have the money to go out, they’re not getting double time on their seventh day of work, whatever it is, but they’re going to make those changes that are going to impact the community at some level. It may not be today, it may not be tomorrow, it may not even be next year, but over time it will impact the whole entire community. Businesses will fail because people don’t patronize businesses because they don’t have as much money. And I think when you take the buying power away from the people that essentially move this economy in this community, I think that’s what people won’t recognize until it’s too late. And that’s one thing that I think people need to understand is that this is not just going to impact the people that are working out there, but it’s going to impact all the businesses and the community itself.”

Nevada Gold Mines asks for a vote on unionization at Carlin

ELKO – A union representing more than 1,000 miners is planning a Miners’ Rights Expo next week, claiming the two large mining companies that o…

Barry Baker, right, an organizer with the Operating Engineers Local 3 union, talks with Lorri and Jim Sauer at the Miners' Rights Expo hosted Friday by the union at the Elko Convention Center. Jim Sauer works at the Nevada Gold Mines Exodus Mine in the Carlin Trend.