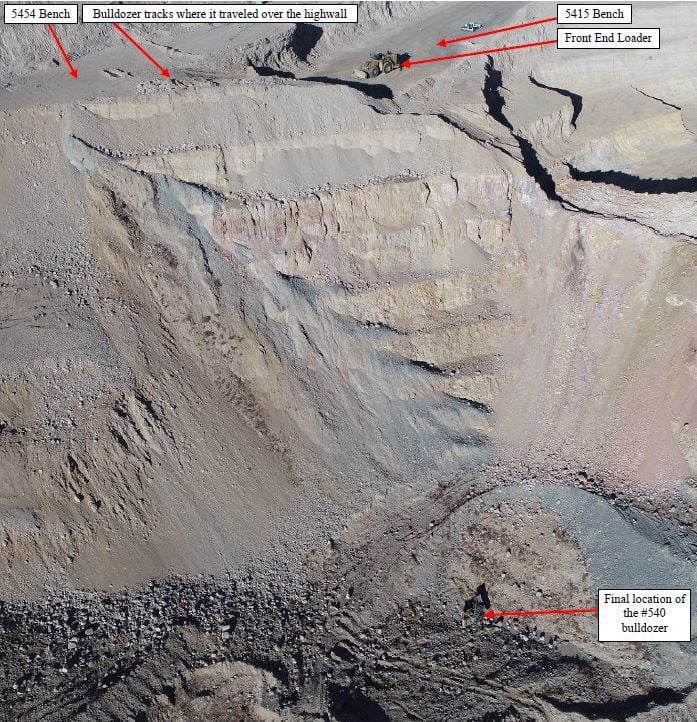 This photo included in a federal mine safety report shows the 300-foot fall of a bulldozer on Nov. 8, 2020, at Round Mountain Gold Corp.'s mining complex in Nye County. 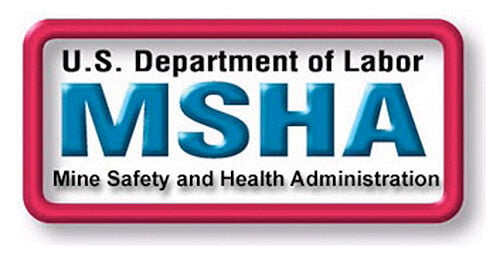 A central Nevada gold mine has been cited by the U.S. Mine Safety and Health Administration following a fatal bulldozer crash in November.

Round Mountain Gold Corp. failed to conduct a prior workplace examination of the high-wall area at the company’s Smoky Valley operations in Nye County on Nov. 8, according to MSHA. “Without a workplace examination for that area, hazardous conditions existed, such as a lack of work area illumination, and a lack of barricades or warning signs along the edge.”

Robert Larson, 58, was pushing blasted rock from a bench down to a front-end loader shortly before sunrise when his bulldozer backed up the slope in the open pit and veered to the right and over the edge of the high-wall, MSHA reported.

“I would like to offer my deepest condolences to the employee’s family during this unfortunate circumstance,” said Neil Jensen, vice president and general manager of parent company Kinross Gold Corp., following the fatality.

MSHA said investigators determined there were no barricades or signs to provide a warning of the extreme fall hazard at the edge of the pit high-wall, and mine management “did not follow their company policy that prohibited work in certain areas while it was dark.”

Light plants were available but not in use. “Since August 2019, MSHA inspectors cited the mine operator four times for not using light plants when it was dark,” stated the fatality report.

The temperature was below freezing and it was windy and snowing at the time, but those were determined not to be contributing factors.

Larson had approximately 41 years of mining experience, 21 of them at Smoky Valley. His experience included 14 years of operating Caterpillar D10T2 bulldozers. Investigators determined that his annual refresher and task training were current.

Three orders and one citation were issued to Round Mountain Gold Corp.

“The mine operator engaged in aggravated conduct, constituting more than ordinary negligence, in that a company-designated competent person did not perform a workplace examination prior to miners entering into the assigned area,” stated MSHA. “This is an unwarrantable failure to comply with a mandatory standard.”

In response, the company retrained all miners on its written safety policy prohibiting material to be cleared on the edge of high-walls when it is dark. Smoky Valley Common Operations also “developed written policies and procedures to ensure that workplace examinations of assigned work areas will be conducted and documented.” The company has instituted a written policy to post warning signs and barricades along the edge of the pit high-wall, and managers have been trained in the policies and procedures.

“The 2019 non-fatal days lost incident rate for Smoky Valley Common Operations was 1.38, compared to the national average of 0.79 for mines of this type,” stated MSHA.

Larson’s death was one of 29 mining fatalities in the U.S. in 2020, and Nevada’s only mining-related death since November 2018.

A preliminary report from the U.S. Mine Safety and Health Administration states that a 58-year-old man was operating a bulldozer when he was k…

Fatality reported at Kinross Round Mountain

Kinross Round Mountain reported an employee fatality at its Nye County mine Sunday.

This photo included in a federal mine safety report shows the 300-foot fall of a bulldozer on Nov. 8, 2020, at Round Mountain Gold Corp.'s mining complex in Nye County.