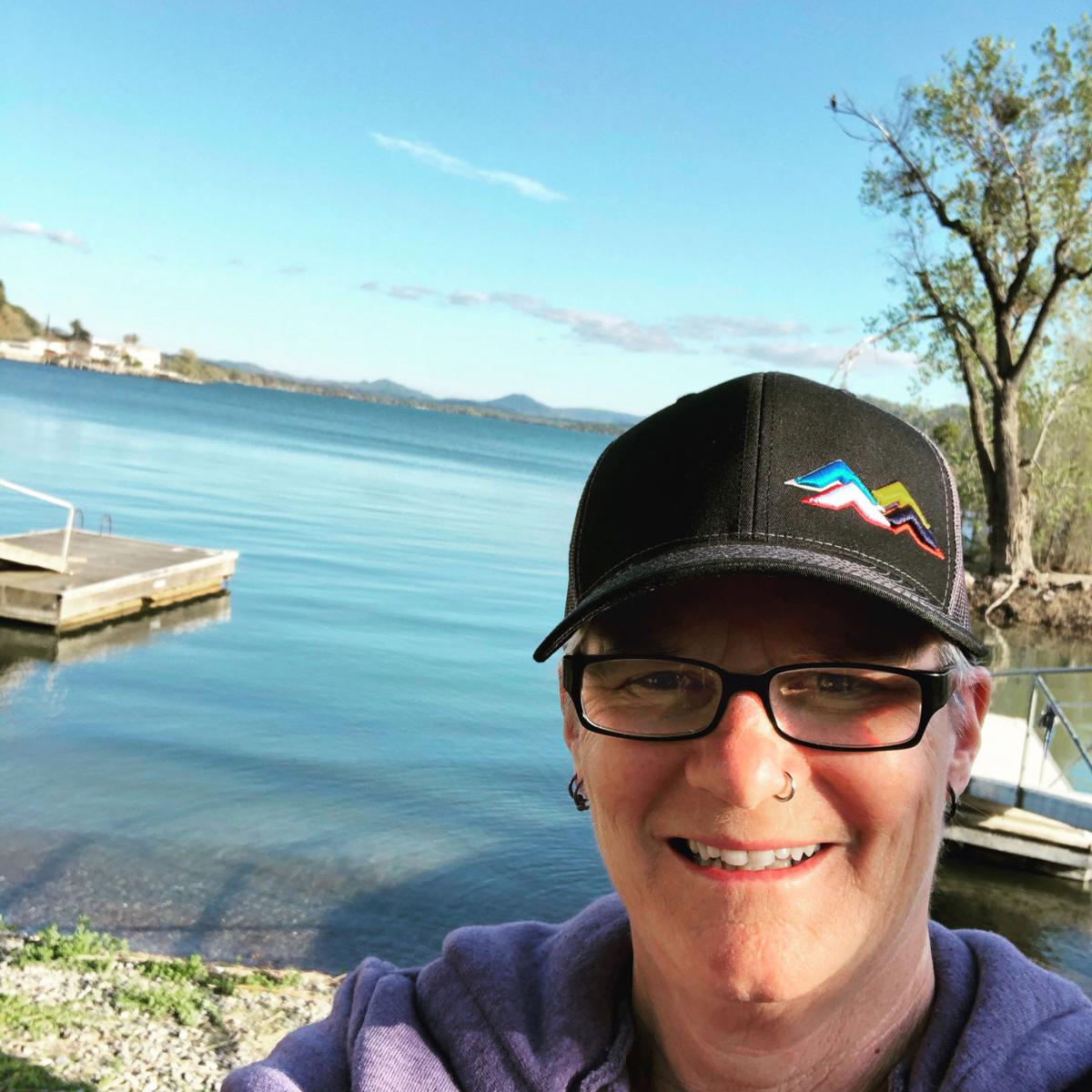 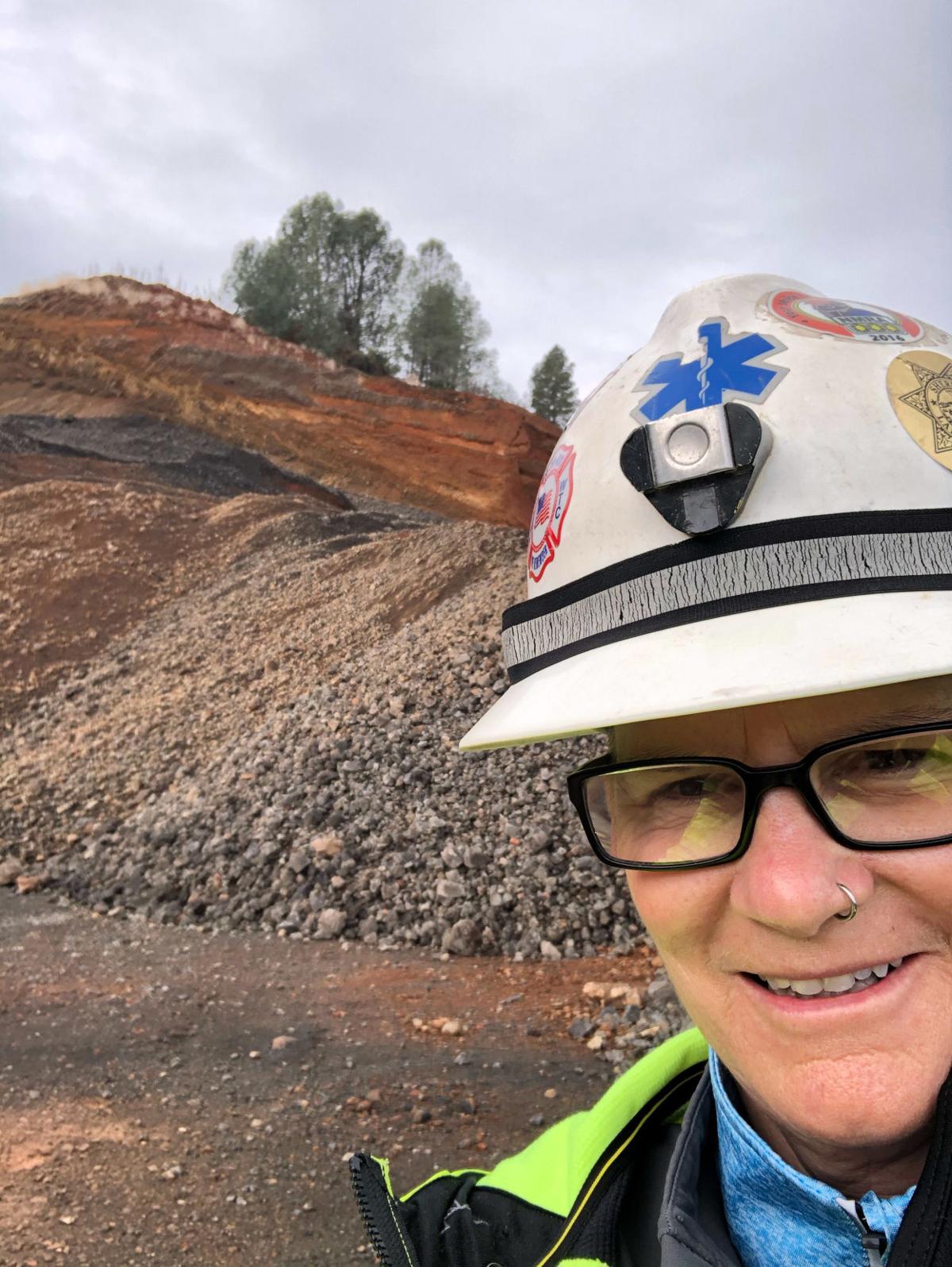 Diane Watson logged 22 years of experience with the Mine Safety and Health Administration. 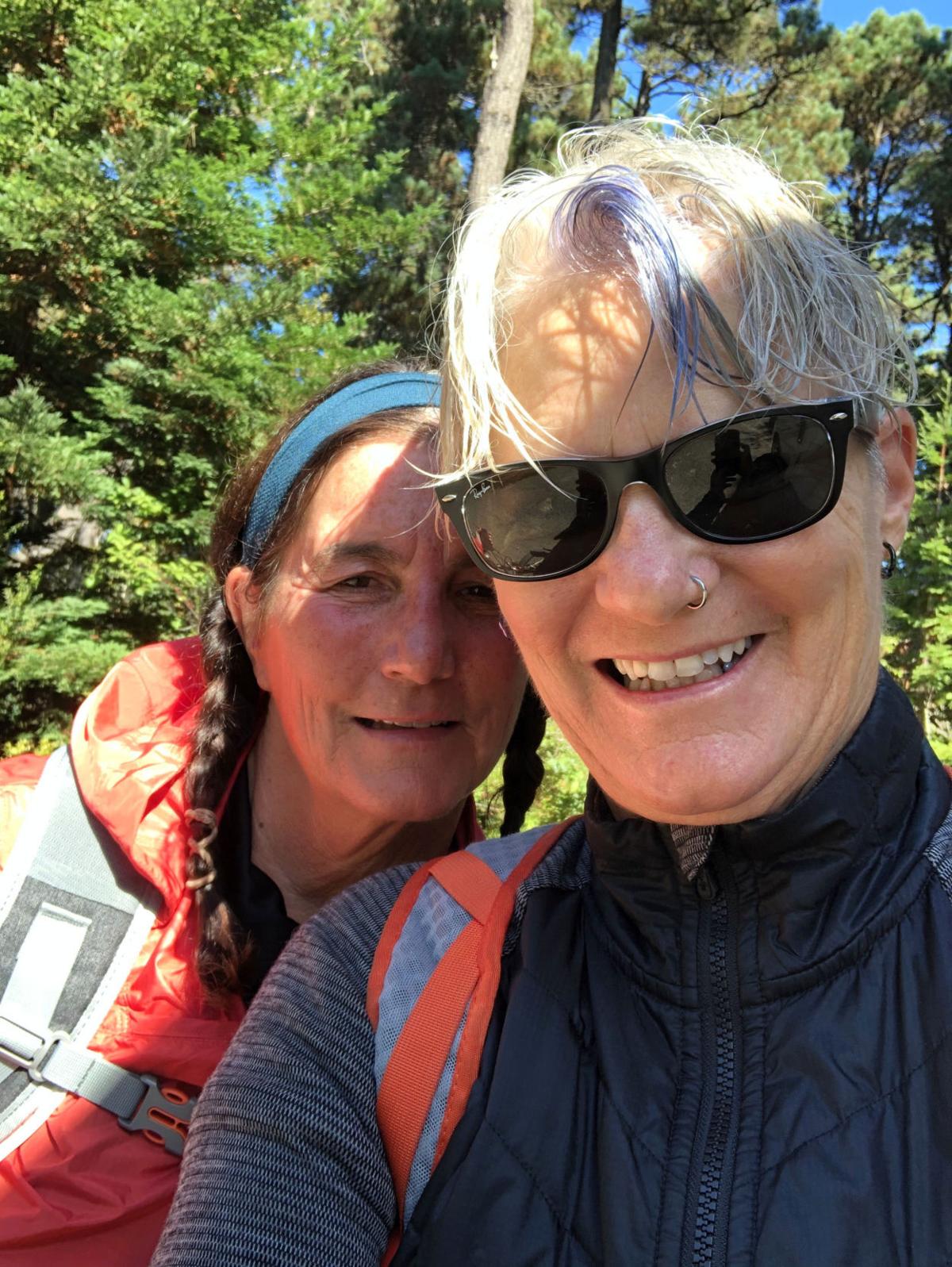 Diane Watson and her sister Donna, left, hike the Mendocino coast in California. 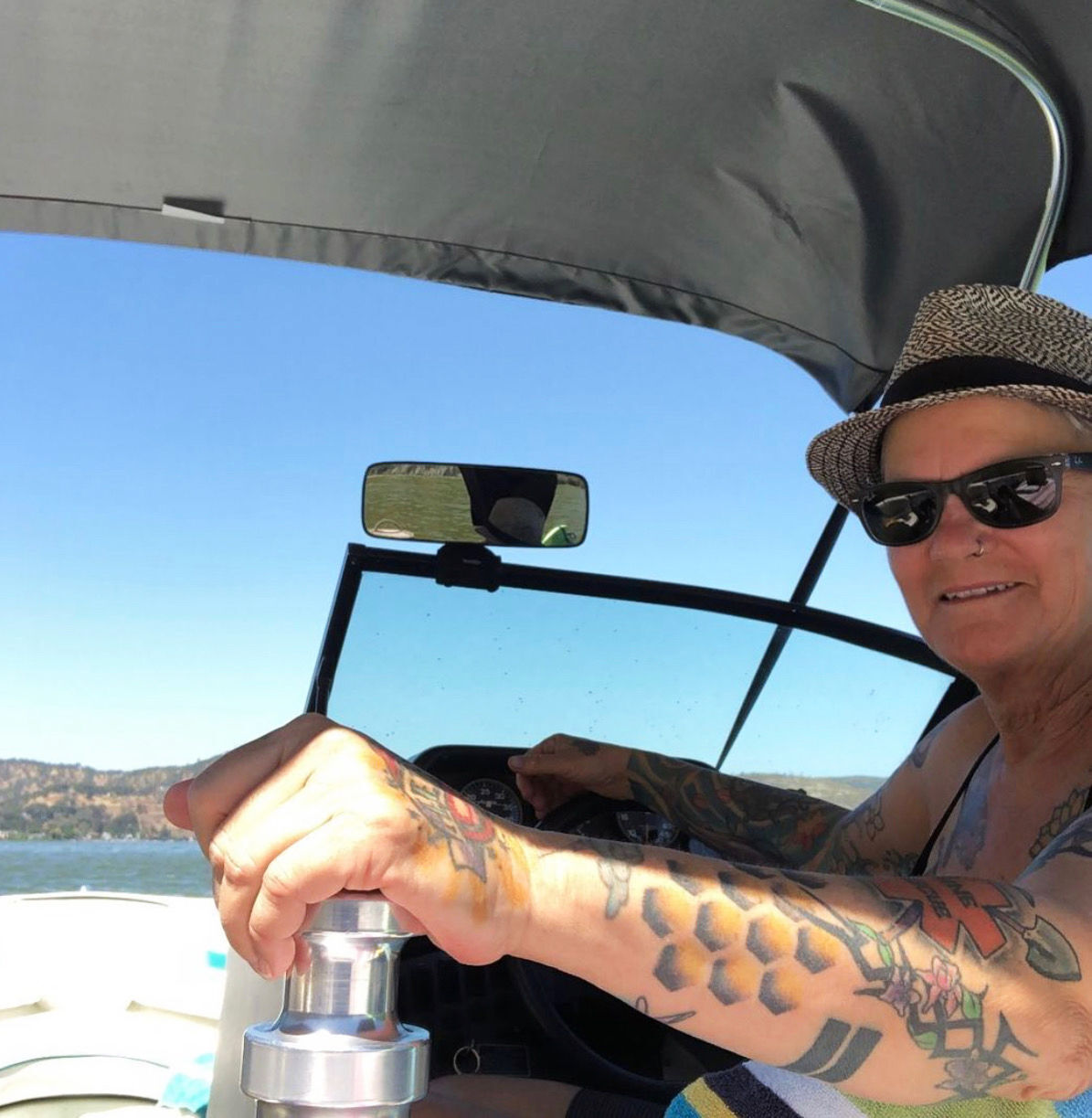 Diane Watson retired after 30 years of working in the mining industry, starting as a haul-truck driver, moving into safety and becoming a Mine Health and Safety Administration supervisory special investigator.

A Mine Safety and Health Administration inspection may not be a favorite part of the job for any miner, but it’s likely that over the years MSHA visits have helped prevent many injuries at mines around the country.

Diane Watson, who retired as a MSHA supervisory special investigator in December 2019, recently visited with the Mining Minds podcast hosts and talked about how she got into mining, her long-time interest in safety, and her years with MSHA.

Watson: It was tough, but I think it made me who I am. So I don’t look back and go, wow, that was a real bummer. Of course it was. … But I’m grateful for all the experiences I’ve had, bad and good.

Mining Minds: I think it is healthy to hear that other people went through stuff and came through on the other side, and have been as successful as someone like yourself.

Watson: I agree. If they’re going through a hard time, it gets better. And it gets wonderful, actually, if you just stick it out.

In September 1991, Watson decided to leave a job at a JC Penney distribution center and moved back to Clear Lake so she could spend more time fixing up her great-grandparents’ cabin.

Watson: The decision to move was a struggle. I left a really good job to move to an area that is economically struggling. But this is where I get into my mining history. Because here in the county where I live, McLaughlin Mine was the largest employer in the county. When I got here, the first thing I did was apply there.

I found out who the HR person was. I wrote a cover letter addressed to that individual, and I put things in there like, opportunities for women, thinking that was going to work. And it did. I was surprised, but it worked. I started at the mine driving a triple -seven haul truck hauling ore.

There were other women on the crews. I wasn’t the only one there. There were actually women that were running the loaders and stuff. It was really progressive back then.

I think I was on a haul truck for a couple years, and then I started running D10 dozers and 992 loaders. I think we had a 14G grader there that I got to run.

Then a job came open in the safety department. And I wanted that job. I was an outspoken advocate for safety on my crew. I was one of those people. You know those people.

So I put in for that job and I was up against three very capable guys who had a lot more experience at the mine than I did.

I think the one thing that really got me that job was … they asked a question about the previous safety technician. … They asked me, what would you do different than [him]?

And I was honest. I said, I really liked [the previous technician], but I really think he failed at getting buy-in from the miners. He did that because twice a year he would be running around like a chicken with his head cut off, because anytime MSHA was going to show up, he would be freaking out, because he knew it was getting close to inspection time, so he would go around and tell everybody, “MSHA’s coming, MSHA’s coming! You’ve got to get ready.”

I told the interviewer at the time that I would not do it that way. I would say that all day, every day, regardless of MSHA, we need to do this right, because we need to keep our people safe. That answer got me that job.

Once I accepted the job, I made sure my office was at the mine instead of at the admin area. So I started working down at the mine, and I had a presence down there all the time.

I took my first safety job, and you know, it’s funny, I think it was six or seven months after that they made an announcement that they were shutting the mine … Gave everybody eight months’ notice.

So my job transitioned from your routine safety job to a heightened effort at keeping everybody focused on the work and getting them home safe. I’ve got to tell you, that was incredibly challenging, but I’m happy to say there were no lost time injuries.

I think it really helped in my job at MSHA. Being able to communicate with people, and drawing information out of people, maybe people that didn’t want to give me information.

I was rehired by the mine, I think it was five or six months after I was laid off, they rehired me to work at the warehouse and to run equipment.

But because I was the previous safety person there, anytime the MSHA inspector would show up they would were like, let’s get Diane, let’s have Diane walk around with them. I was familiar with the inspectors.

There was one in particular … Mary Lou George. She kind of had a reputation. She was very passionate about safety. And I would take her around, and she would talk to the guys. The empathy that she had, just the way she spoke to them … it was just really impressive. She lost her best friend I guess in a mine shaft, they fell down a shaft … She also lost her brother, he fell down a shaft in a mine. And her father died of pneumoconiosis after working in the mines for years.

So she was very passionate about mine safety, and had a way of speaking to these guys that really drew them out. And I was so impressed by it, I kind of wanted to be like her. And she saw something in me. She said, you’ve got to apply for MSHA. I’m like, I don’t know. But she talked me into it.

I just want to clarify that it’s not like that now. The majority of the inspectors out there are fine, upstanding, decent people. And one of the things that I really like about MSHA, as opposed to OSHA, for example, is that MSHA hires people from the mining industry. They hire people that have mining backgrounds.

I was appalled by the way the judges were trained. They received no training at all to the scenario. … I judged the Peruvian mine rescue team who in my view … killed their patient. It was a sucking chest wound. The treatment they gave … it would have killed the patient. … But that team won the competition. … I was really kind of appalled by that.

There was a meeting afterwards of all the judges, for feedback, and I told my thoughts. I gave them a piece of my mind.

So then in 2003 I was tapped to be the first aid coordinator for the national mine rescue competition. Probably because of my background, but also because I was pretty outspoken. …

I did that up until the time I retired.

At a competition in New Mexico, Watson was upset by all the trick questions on the test.

Watson: I thought to myself, wow, that’s not my philosophy at all. My philosophy is, not to trick teams, but to teach teams. We’re here to teach, and I’m here to learn. You can’t do that if you’re trying to trick people.

So that’s another thing I learned what not to do. From then on, every first aid test that I developed was structured to the chapters, it was in context, and there were no trick questions.

Mining Minds: You weren’t trying to mislead them, or get them to second-guess themselves, because that’s the worst thing that you can do.

When it comes to my career with MSHA—and I’ve got 30 years of mining experience, 22 years with MSHA—the thing I’m most proud of is the mine rescue, relationships that I established, the competitions that I did, the learning. I learned so much.

The investigators, they’re special people. … They try not to pass judgment; they gather all the evidence before they will make a determination. … I have a lot of respect for the investigators out there.

I loved the job. It was fantastic. It was different every day. And because I was the supervisor, I was able to cherry pick investigations. So that was really nice. Unfortunately, nothing ever came open in Hawaii.

A lot of people don’t realize this, but most of the MSHA investigations, I would say a good majority of them, go nowhere, because investigators are looking at everything. They’re not taking the inspector’s side and going, OK, this is a good violation. … A lot of times it doesn’t rise to that level, and so that case gets closed.

Now that she has retired, Watson has started her own consulting business. She is also a county fire commissioner, she still is an EMT, and she continues to teach people. She lives in her great grandparents’ cabin in Clear Lake that she lived in as a child and that she was remodeling when she started in the mining industry.

Mining Minds: As we started the story and you were talking about the cabin—not only is it the resiliency of Diane that was captured throughout the podcast, but it was coming from 15 years old, making a life decision, and going, you know what, this is just me, this is what I’m doing—and to listen to the story all the way through is truly inspiring to me. That amazing story of just keep pushing, keep pushing, you don’t know where life is going to get you. And the metaphor I guess that I took from it is that cabin that was rough and gruff that you had to fix up, and now you’re standing in it. Truly inspiring.  

Editor’s note: Transcriptions from the podcast have been lightly edited for length and clarity.

MSHA: Vaccine-or-test rule for employers does not apply to mines

Biden announced in September that the Labor Department would draft a rule requiring large employers to vaccinate or test employees for COVID-19. But mines do not operate under the oversight of OSHA. They have their own regulatory agency: MSHA.

The proposed plan, a recorded presentation discussing the plan, a summary brochure, and the site files are available at http://epa.gov/superfund/carsonrivermercury.

Barrick’s production estimate for 2021 is between 4.4 million and 4.7 million ounces of gold and 410 million to 460 million pounds of copper.

Tribes: New evidence proves massacre was at Nevada mine site

RENO (AP) — Tribal lawyers are asking a U.S. judge in Nevada to reconsider her earlier refusal to block digging at a proposed lithium mine nea…

Diane Watson logged 22 years of experience with the Mine Safety and Health Administration.

Diane Watson and her sister Donna, left, hike the Mendocino coast in California.

Diane Watson retired after 30 years of working in the mining industry, starting as a haul-truck driver, moving into safety and becoming a Mine Health and Safety Administration supervisory special investigator.