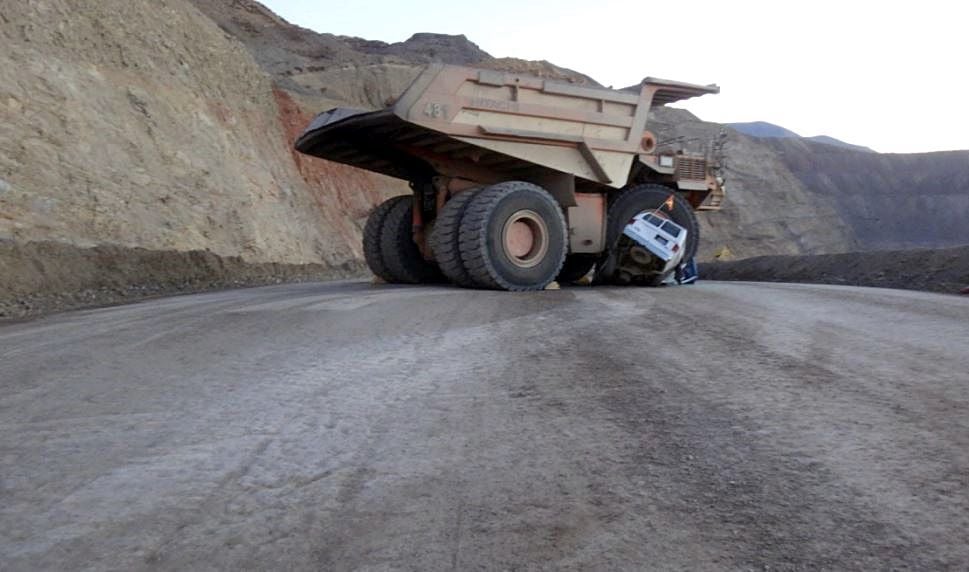 This photo included in the Mine Safety and Health Administration investigation report shows the aftermath of an October 2017 accident at the Marigold Mine. 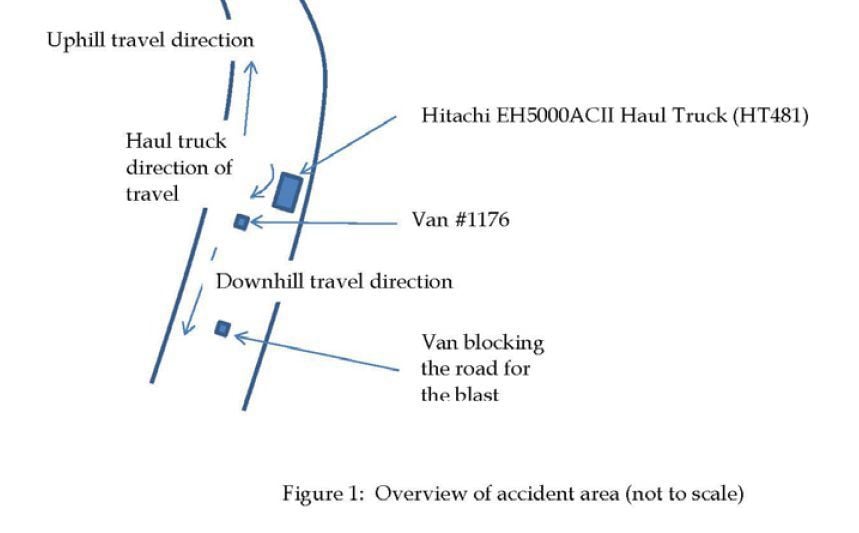 A screenshot from the Mine Safety and Health Administration's report of investigation on the Oct. 31, 2017, fatal accident at the Marigold Mine in Valmy shows the position of a passenger van parked in the blind spot of a haul truck. Two people were killed when the haul truck crushed the cab of the passenger van.

Unenforced policies, lack of communication and ineffective traffic rules resulted in last year’s double-fatality accident at SSR Mining Inc.’s Marigold Mine, according to an investigations report from the Mine Safety and Health Administration.

A loaded 340-ton haul truck struck a passenger van during a fatal powered haulage accident just after 2 p.m. Oct. 31, 2017, at the surface gold mine near Valmy.

Two mine employees — safety superintendent Pete Kuhn, who was driving the van, and equipment operator Omar Bernal, who was riding in the front passenger seat of the van — were killed in the accident. One of the seven other passengers was treated for a leg injury while the remaining passengers and haul truck driver were assessed and treated for shock. The passengers were new employees taking an introductory mine tour, according to the report.

MSHA’s root cause analysis states that the van operator did not make radio contact with the mobile equipment operator and parked in the haul truck’s blind spot on the right side toward the front.

The report indicates that the van operator was allowed to pass a barricade into a congested area while traffic was suspended for a blast and a safety check of another piece of equipment. When traffic resumed, the haul truck operator took a right turn, crushing the cab of the van, according to the report.

The passengers riding on the bench seats behind the front seats were able to escape through the side door or window, the report states.

MSHA issued the company a citation for a violation of the Code of Regulations regarding traffic control. Penalty assessments consider factors including history of previous violations, size of the business, any negligence by the operator, gravity of the violation, and the operator’s good faith in trying to correct the violation promptly, according to MSHA’s website. The penalty amount was not included in the MSHA investigation report.

The company also was cited under a different event number for missing the MSHA experienced miner training record for Kuhn, the report states; Bernal’s training records were in compliance.

Kuhn, 60, had more than 25 years in the mining industry including more than one year as safety superintendent at the Marigold Mine. Bernal, 39, had 16 weeks of experience as an equipment operator as a temporary employee at the mine, and Oct. 31 was his first day as a Marigold employee.

Under Trump, Interior officials said mining or grazing would not pose a significant threat to sage grouse

To help solve a gap in employment, NGM is looking to its longstanding relationship with the University of Nevada, Reno.

SSR Mining Inc. reported a strong financial performance in the first quarter of this year, including adjusted net income of $102.4 million, or…

Argonaut Gold Inc. announced record revenue of $105.3 million and net income of $27 million, or 9 cents per share, for the first quarter, and …

Mining Quarterly to get new look and name

The revamped magazine will be called Mining the West.

“At Round Mountain mining was impacted in the first quarter by precautionary measures taken after movement in the north wall of the pit,”

“Barrick majority-owns and operates five of the world’s 10 largest gold mines, with a sixth in the form of Turquoise Ridge waiting in the wings"

“In the near future, we will be communicating our plan for Jerritt Canyon, which will include ways to further improve productivity and reduce operating costs.”

US fights new deadline for rare plant protections in Nevada

The Fish and Wildlife Service was supposed to decide last October whether to list the plant as endangered.

Newmont's Tom Palmer said there have been 12 COVID-19 deaths at its operations over the past year, and they have had “a profound impact on the entire Newmont family.”

This photo included in the Mine Safety and Health Administration investigation report shows the aftermath of an October 2017 accident at the Marigold Mine.

A screenshot from the Mine Safety and Health Administration's report of investigation on the Oct. 31, 2017, fatal accident at the Marigold Mine in Valmy shows the position of a passenger van parked in the blind spot of a haul truck. Two people were killed when the haul truck crushed the cab of the passenger van.