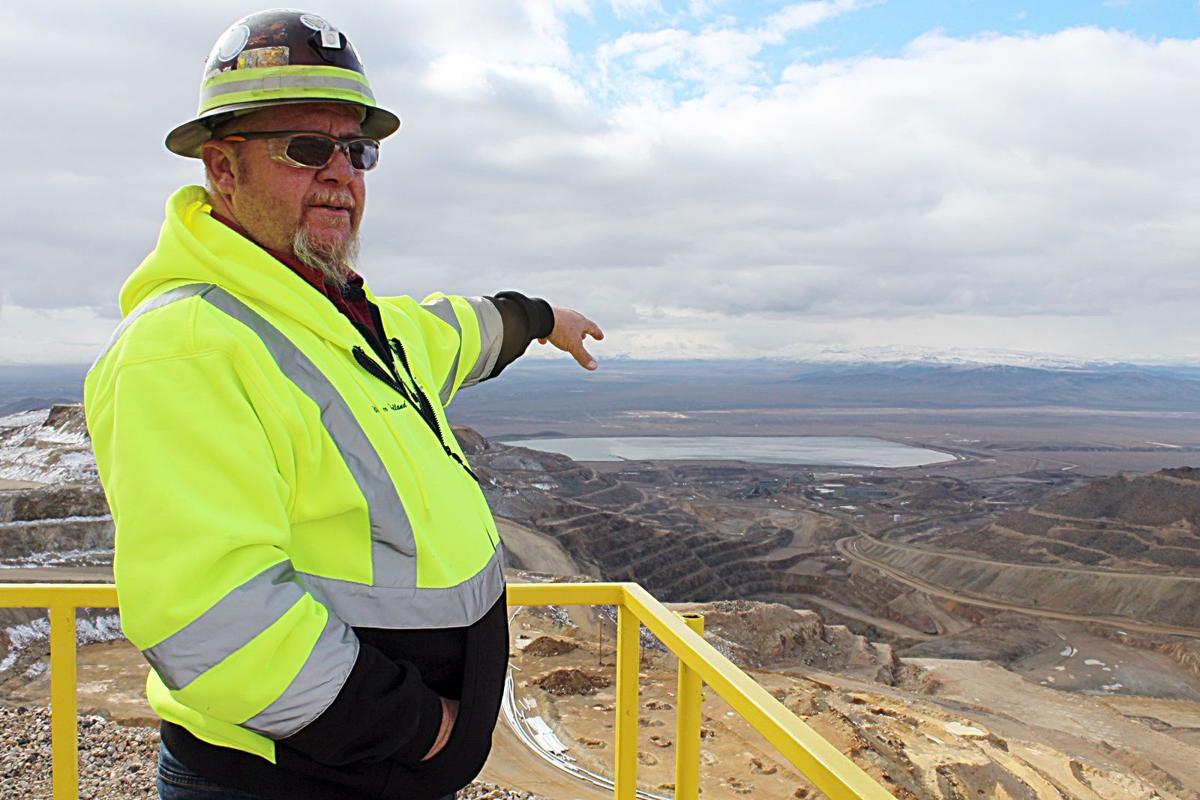 Phoenix Mine Manager Walt Holland talks about the proposed expansion at the site. 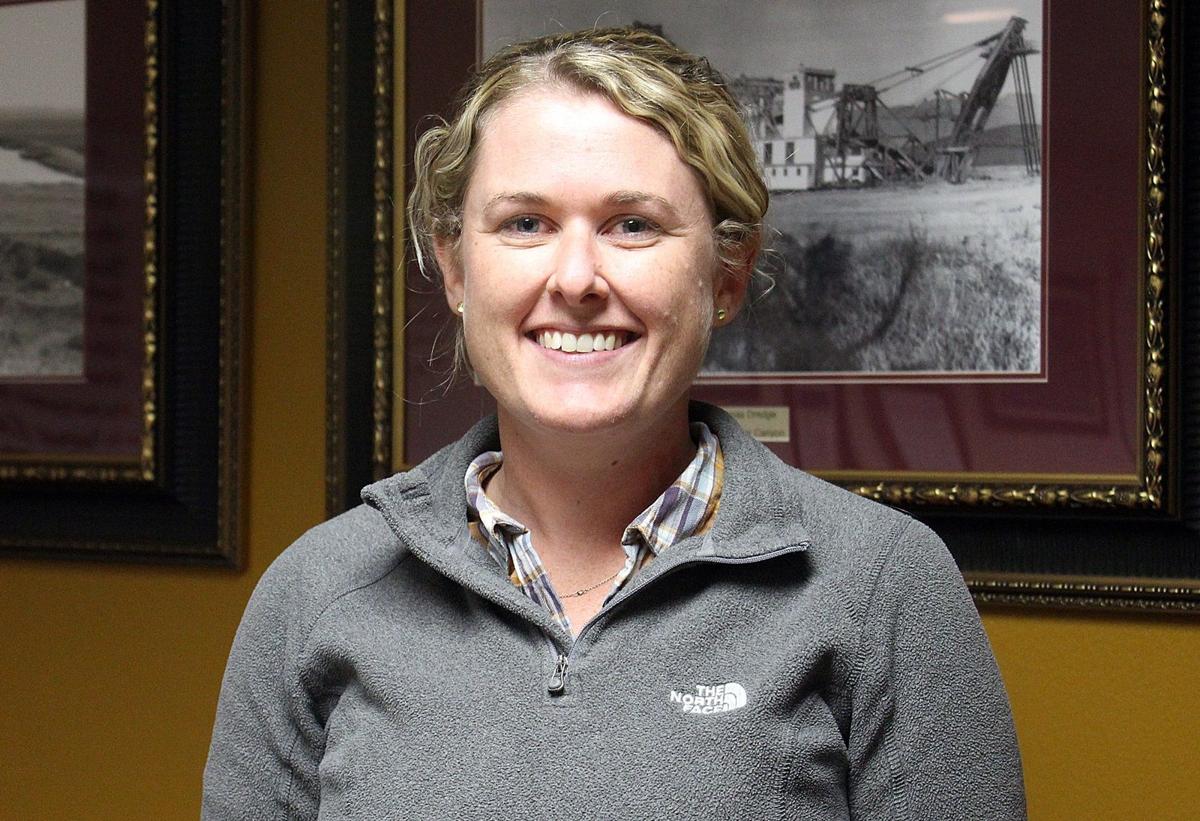 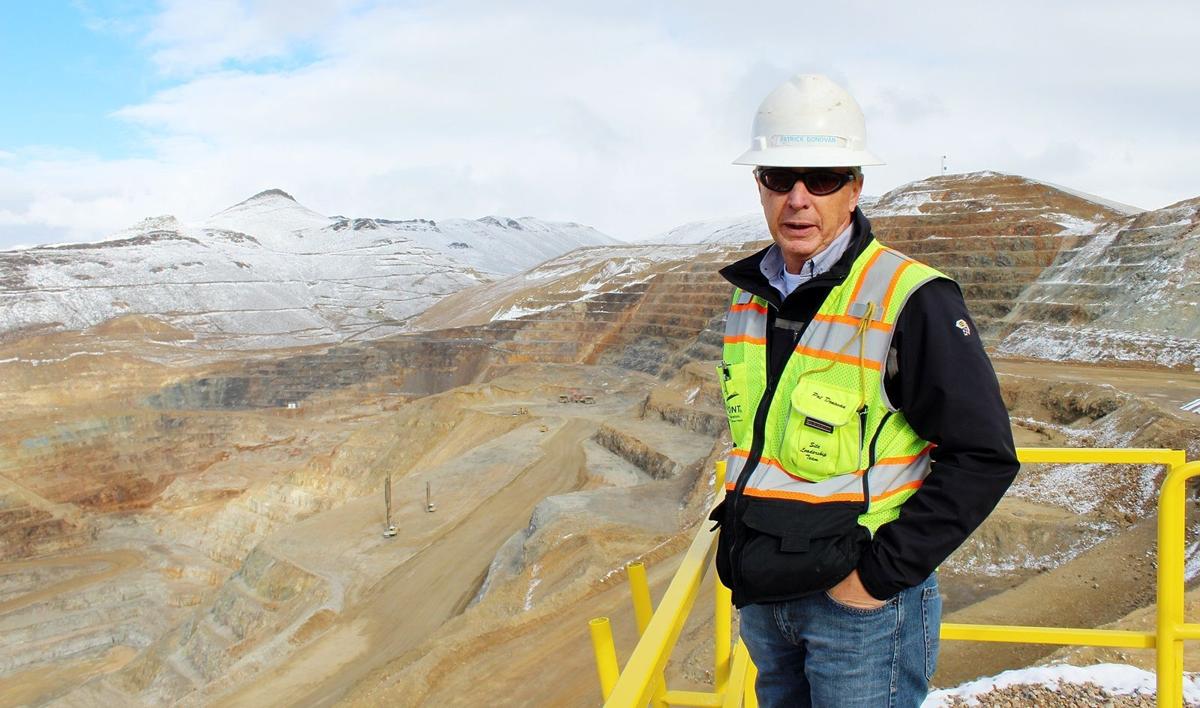 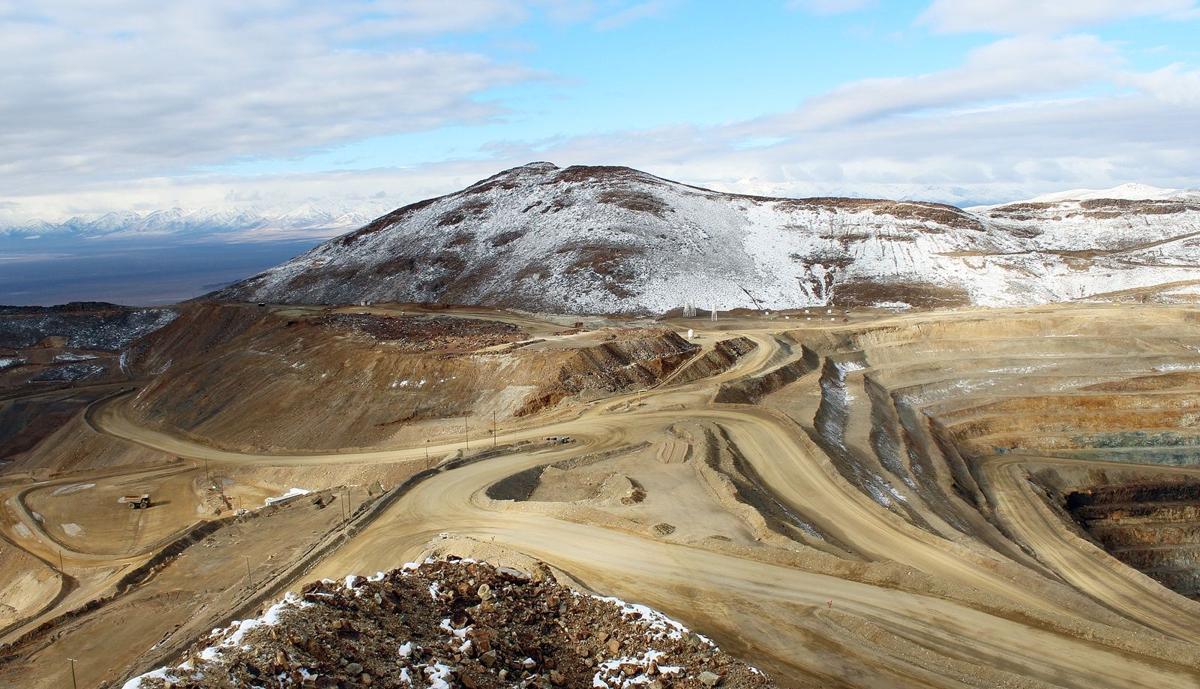 This portion of land between the two pits will be mined if the expansion plan is approved for Newmont Mining Corp.'s Phoenix Mine. 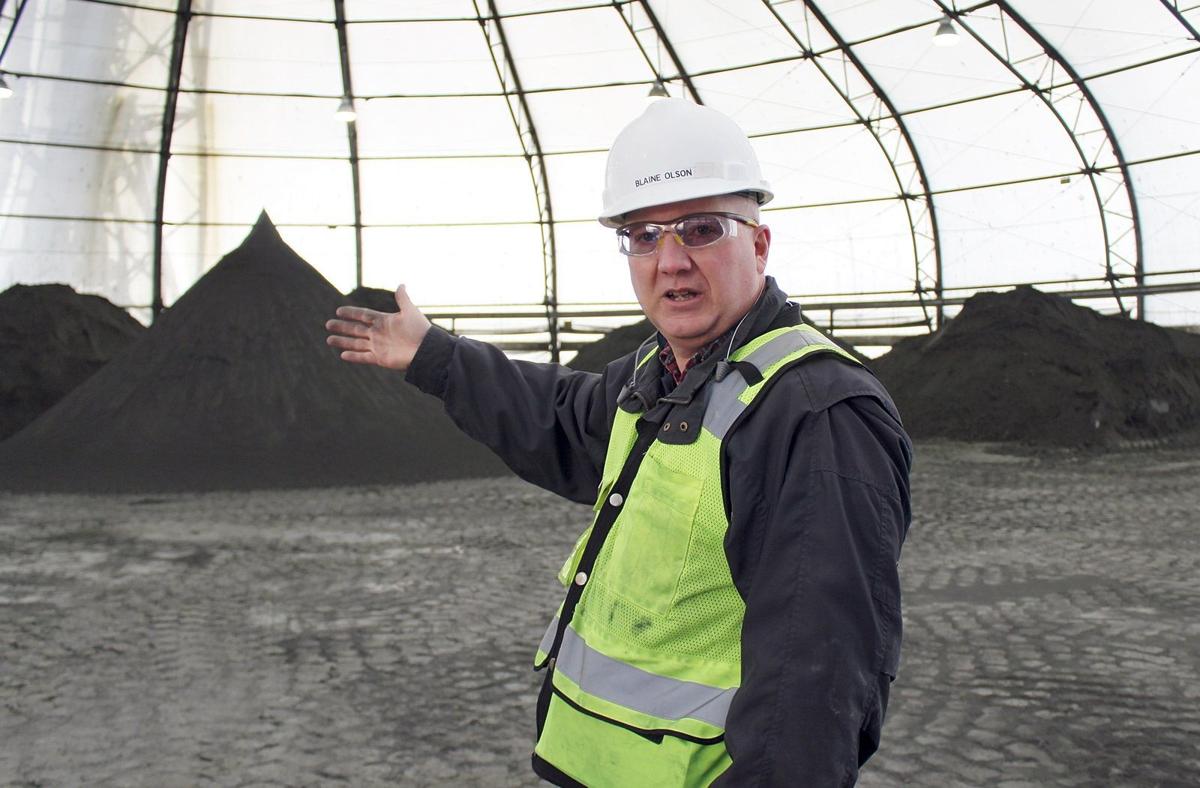 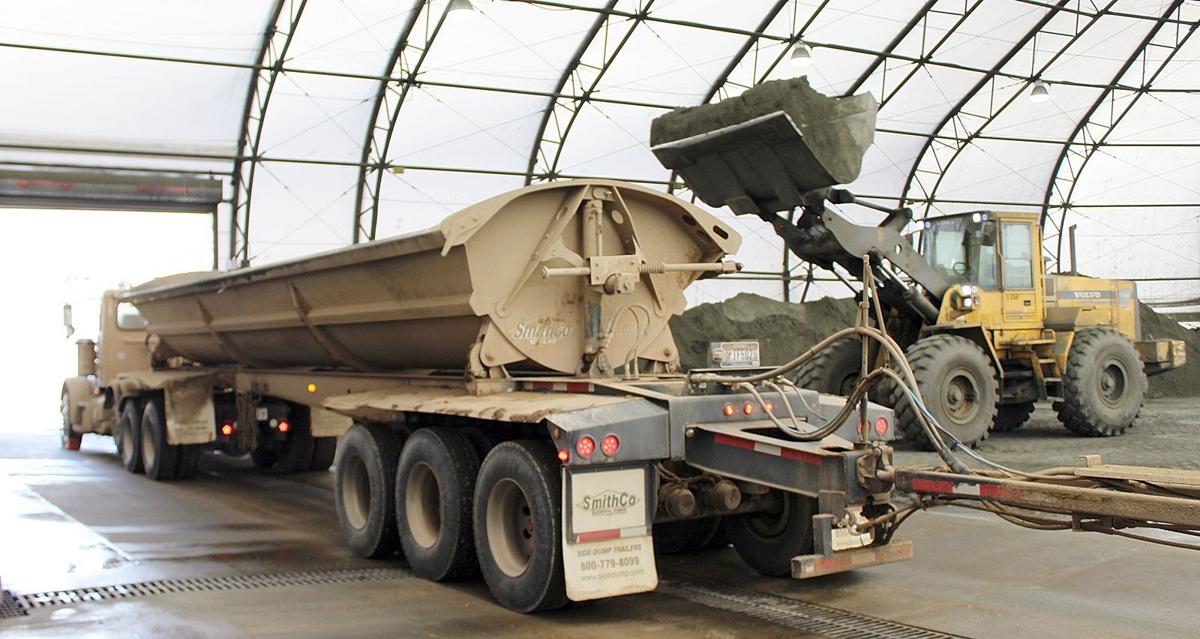 A driver from Quality Transportation Inc. from Battle Mountain loads the concentrate from the Phoenix Mine into a trailer. 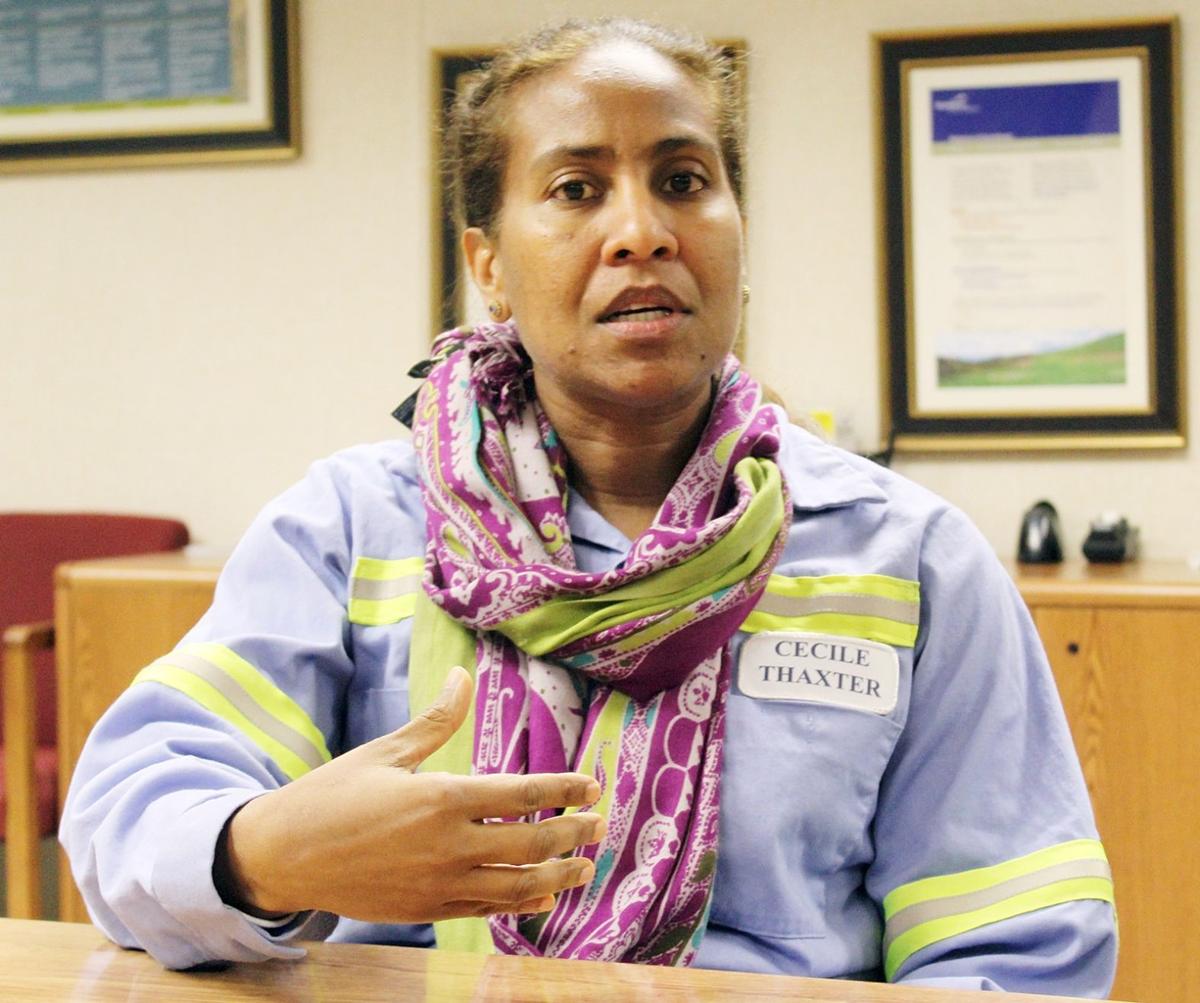 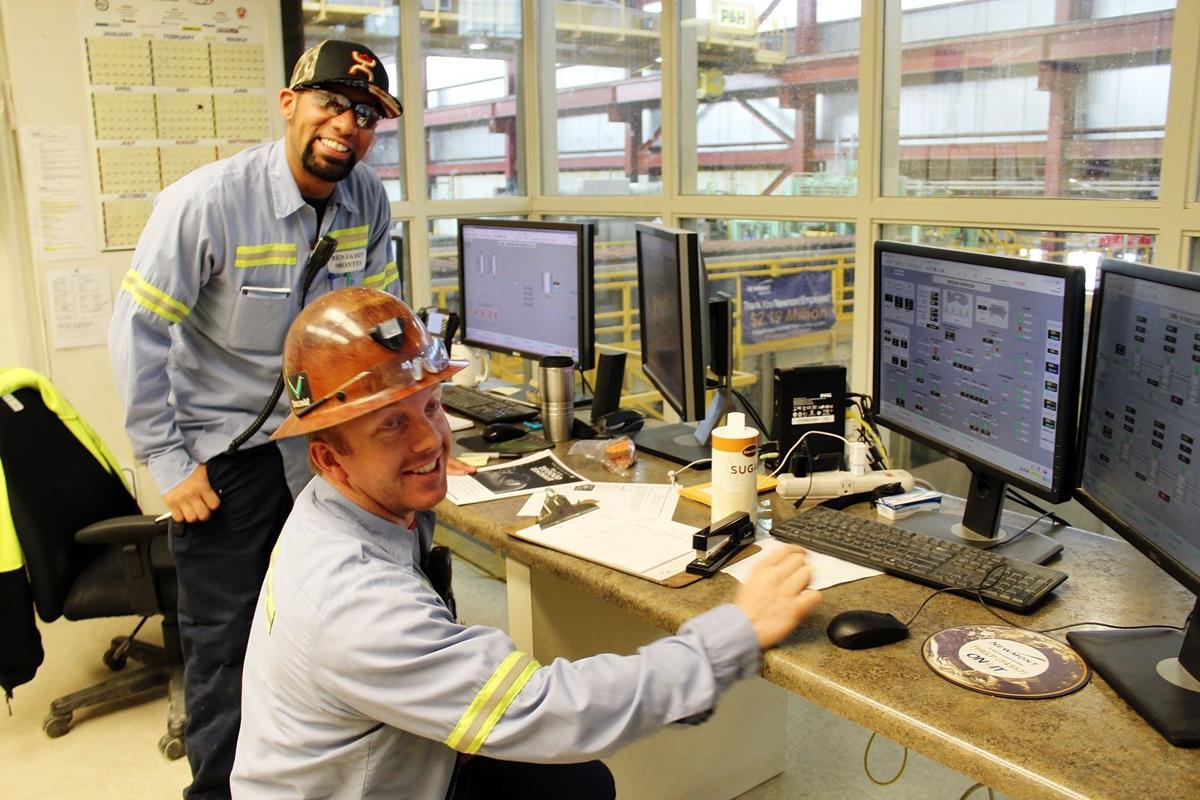 Phoenix Operations Supervisor Cory Mills, talks about how the copper leach facility is monitored in the process control room. Benjamin Montes, SX-EW operations, stands behind him. 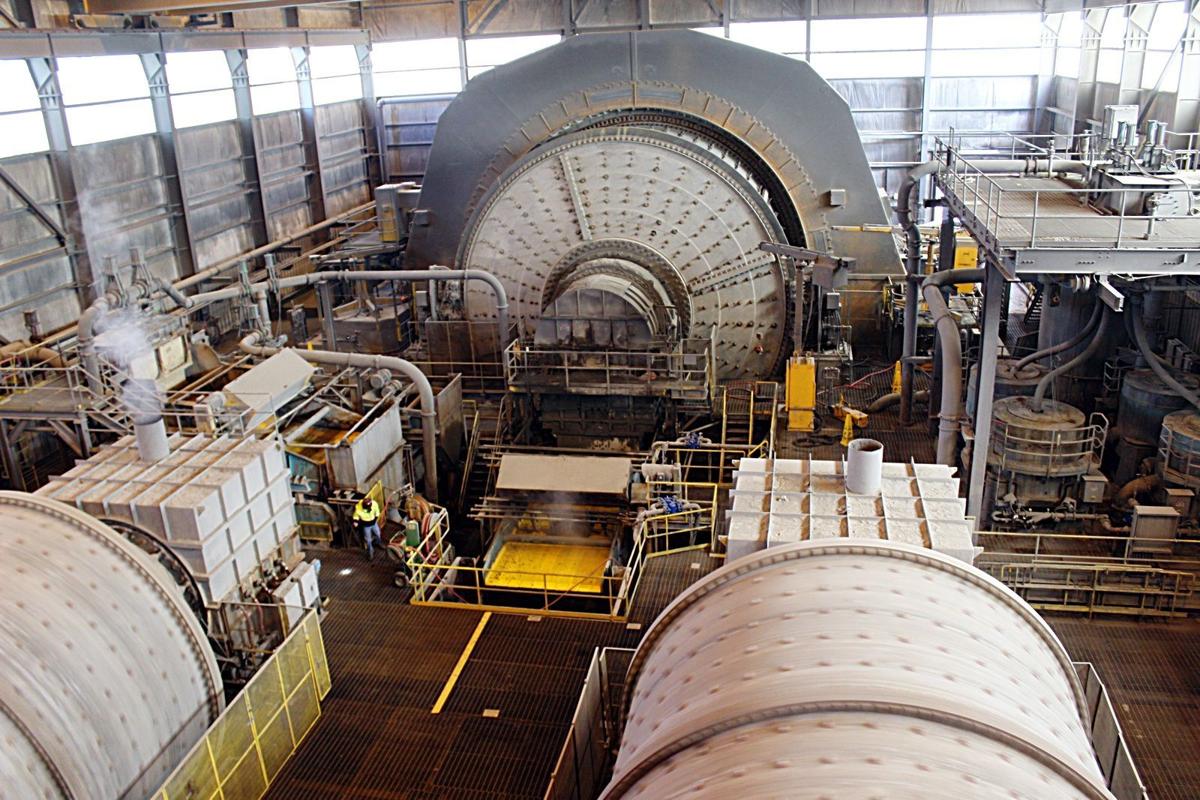 The ball mills are operating while the sag mill is motionless in the background at the Phoenix Mine. 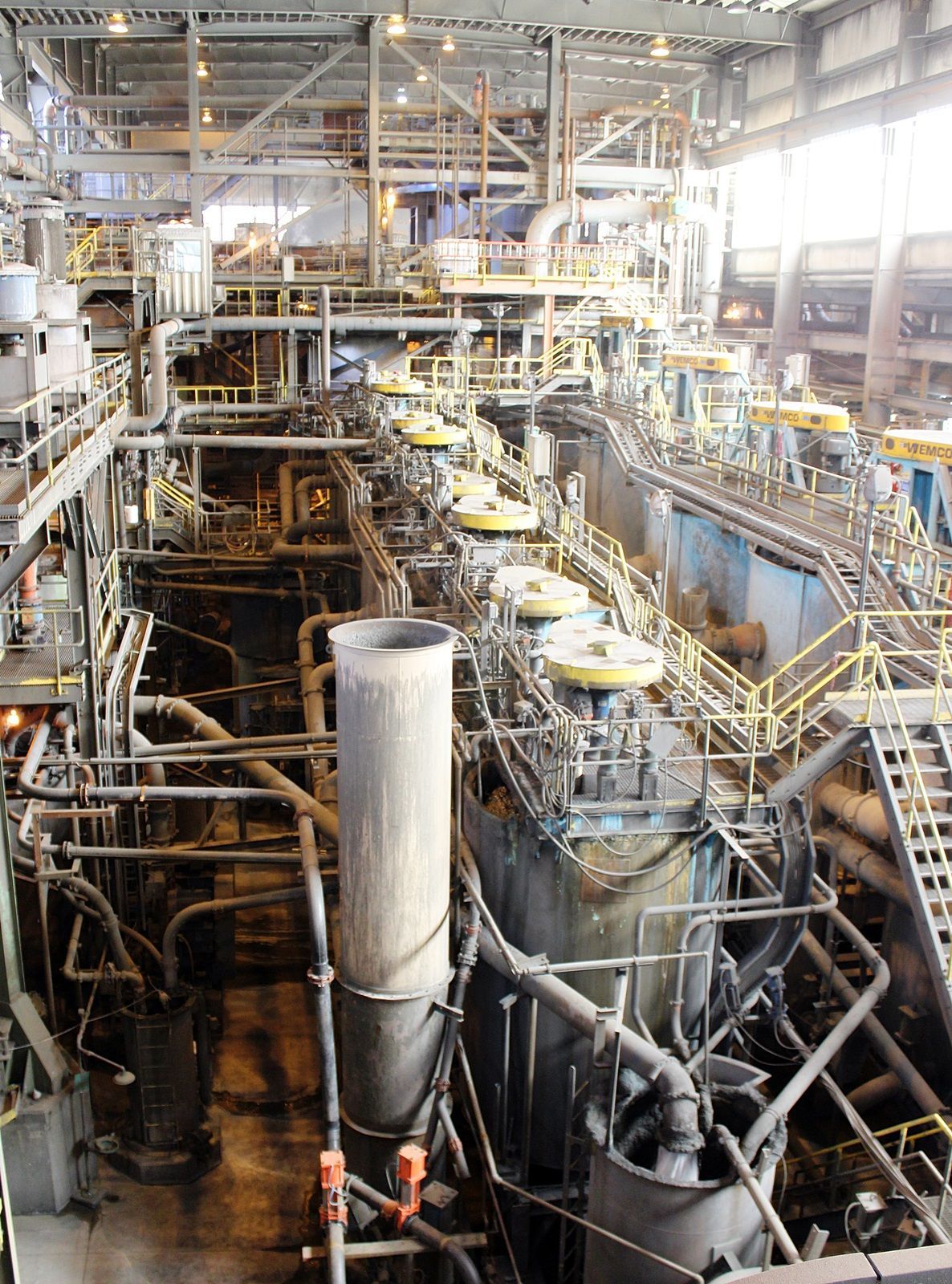 Cells in the foreground are cleaners and the roughers are in the far bank of cells in the processing area of Phoenix Mine. The cylinder tank is part of full potential. 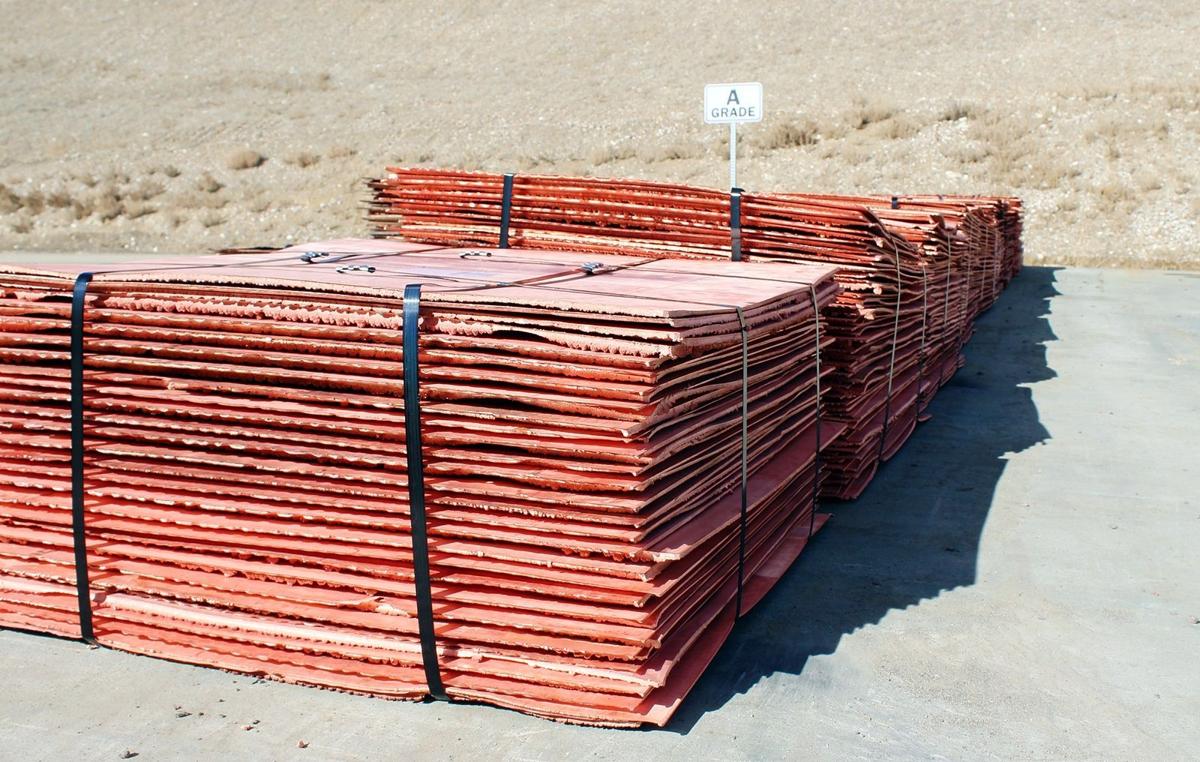 Copper plates await to be shipped outside Newmont Mining Corp.'s SX-EW facility at the Phoenix Mine.

BATTLE MOUNTAIN – While trying to expand the mine, employees at Newmont Mining Corp.’s Phoenix Mine are also continually improving.

Under the Greater Phoenix Mine Project, Newmont is proposing to expand the mine, which produces gold, silver and copper. The mine is located on public land about 12 miles south of Battle Mountain in Lander County. The land is administered by the Bureau of Land Management.

The site will also expand its copper leach facility, waste rock facilities, and tailings storage. The expansion won’t need an increase in employees, but it will “significantly” extend the mine’s life from 2040 to 2063, Coleman said. The throughput in the mill will be the same, just for a longer period of time, said Walt Holland, mine manager.

The expansion won’t increase the number of jobs at the site. Phoenix employs almost 500 people, Holland said. Mining is done at Phoenix with its 13 Caterpillar 793Ds, which are 250-ton haul trucks, one EX5500 Hitachi shovel and two EX3600 Hitachi hydraulic shovels and various support equipment. The 5500 has a 37-yard bucket and the 3600s have 32-yard buckets.

The plan of operations boundary will increase from 8,500 acres to 18,500 acres if the expansion is approved, Coleman said.

“Essentially we’re combining our two main pits into one, and then we will be expanding the area as well of that pit area,” Coleman said.

The two main pits are Fortitude and Bonanza. When they are combined, the larger pit will be called the Phoenix Pit.

The site only has about eight acres of core sage grouse habitat being affected, Coleman said. The site does have the lesser categorized habitat being impacted as well.

“Certainly the pit expansion is over what areas are already disturbed currently by operations,” she said.

The south portion of the property – where most of the expansion is happening – does not have any sage grouse habitat.

Coleman said Newmont won’t know until after the EIS is finalized if the site will have to do any mitigation work for sage grouse habitat.

“The next step is that we develop a draft EIS,” Coleman said. “Then there will be another opportunity for public comment after that. We are hoping to have the whole process completed by early 2017 -- we hope to have permits in hand.”

She said the permitting process had not seen any unexpected obstacles.

“It’s going along really well actually,” Coleman said. “It is quite a large project, but it’s something that we hope to get for the life of our mine.”

While employees work to expand the mine, it isn’t just business as usual on the site. Phoenix staff is focused on the company’s full potential program.

This program has been called by many other names over the years, said Phoenix General Manager Cecile Thaxter.

“We call it full potential but really what it is, is continuous improvement,” she said.

The structured program is being driven across all of Newmont’s mine sites across the globe, said Phoenix Full Potential Manager Pat Donovan.

“Every mining company has continuous improvement programs in place, but it’s particularly critical now because we’re in a low metal price environment,” he said. “We’re at a higher cost in capital environment and that has eroded our profit margins, so there’s only a few things that we can control, and that is our cost. So we are looking at opportunities in every aspect of the mining cycle for savings or more ways to create more revenue in order to increase our profit margin.”

“We have a lot of fixed costs at our mine site,” she said. “So whether or not you have 10 people operating and you get throughput up 40,000 or 30,000, you still need those 10 people. So it’s more the per unit cost that’s going to come down. It’s not like we’re going to reduce overall cost, but we’ll be able to spread that fixed cost among a lot more ore going through the plant, so that unit cost comes down, which is very important.”

She said the “nice thing” about the full potential program -- diagnose, design, deliver -- is that it is employee driven.

“You actually go talk to people and you interview and you get ideas from the folks,” Thaxter said. “So all these ideas come up from our workforce and they can be from our salary guys or our hourly guys. It doesn’t really matter. Everybody has an idea, or everybody has different ways of thinking about things.”

Donovan said the full potential program is structured the same way at every site and his job is to corral the employees together to work on continuous improvement.

“The structure of it is, you diagnose the issues, you design solutions and then you deliver the opportunity in the form of savings or increased efficiency,” he said.

The program has a “three-pronged approach,” Donovan said.

At the site they look at floatation recovery, which recovers more metal, and throughput, which is getting more rock through the mill, he said.

“The more rock you get through the mill, the more metal you recover and your costs come down. So you get a two-fold benefit from that, both from recovering more metal and lowering your cost,” Donovan said.

The other approach is in cathode production from copper leach. The site produces copper plates in its SX-E facility and then the plates or cathodes are shipped to manufacturers.

Donovan said the site has already solved all the technical issues around the solvent, extraction and electrowinning facility, and will be looking at “operational excdellence to get the plant running exactly as we would want it to.”

Donovan said “the greatest thing” about the program is that Newmont “made it important for us to sit down and talk.”

Thaxter agreed that “employee engagement” is key to the program. The company is driving employees to “take on ownership,” she said.

“So they know that they can contribute to this and they can make a difference,” Thaxter said. “So at the end of the day, when we make a profit or we have cash left over, or we’re able to keep our people employed, then they’ve all contributed to it.”

The Society for Mining, Metallurgy & Exploration is returning in person to Salt Lake City for its 2022 conference.

Phoenix Mine Manager Walt Holland talks about the proposed expansion at the site.

This portion of land between the two pits will be mined if the expansion plan is approved for Newmont Mining Corp.'s Phoenix Mine.

A driver from Quality Transportation Inc. from Battle Mountain loads the concentrate from the Phoenix Mine into a trailer.

Phoenix Operations Supervisor Cory Mills, talks about how the copper leach facility is monitored in the process control room. Benjamin Montes, SX-EW operations, stands behind him.

The ball mills are operating while the sag mill is motionless in the background at the Phoenix Mine.

Cells in the foreground are cleaners and the roughers are in the far bank of cells in the processing area of Phoenix Mine. The cylinder tank is part of full potential.

Copper plates await to be shipped outside Newmont Mining Corp.'s SX-EW facility at the Phoenix Mine.