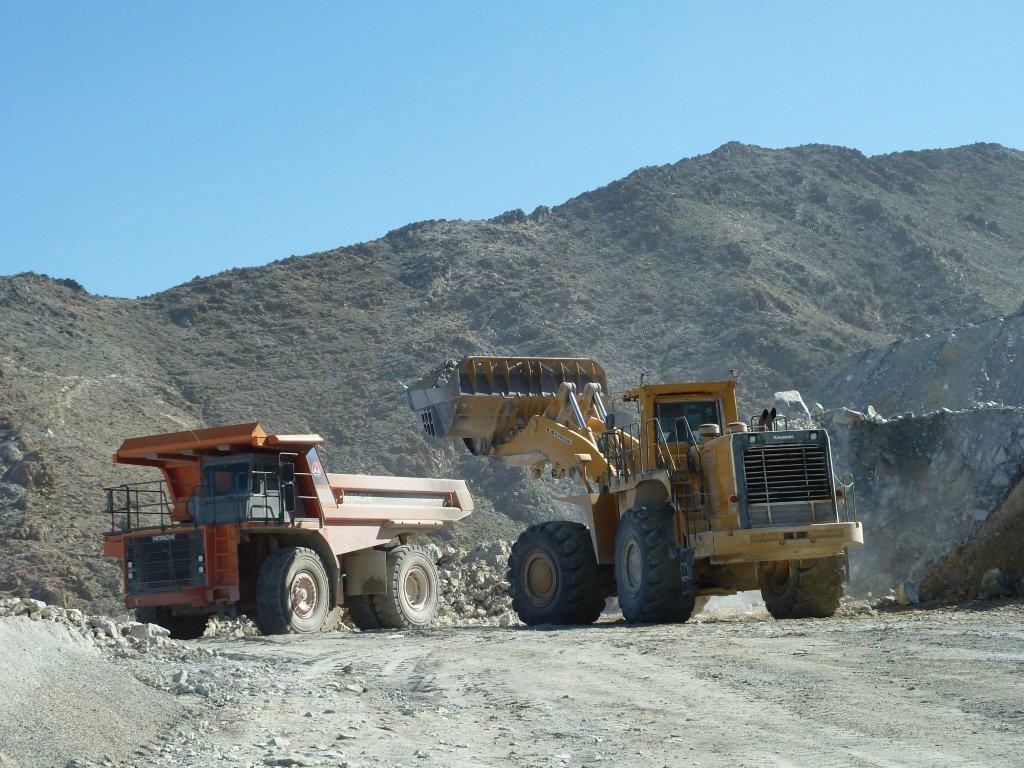 A Premier Magnesia LLC crew mines magnesium at its operations near the town of Gabbs in Nye County.

Deposits were discovered near Gabbs in 1927, leading to the founding of Premier Magnesia. 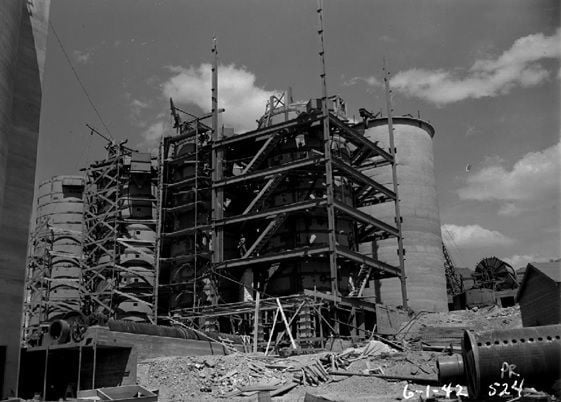 Plant construction at Premier Magnesia began in 1941 near Gabbs. 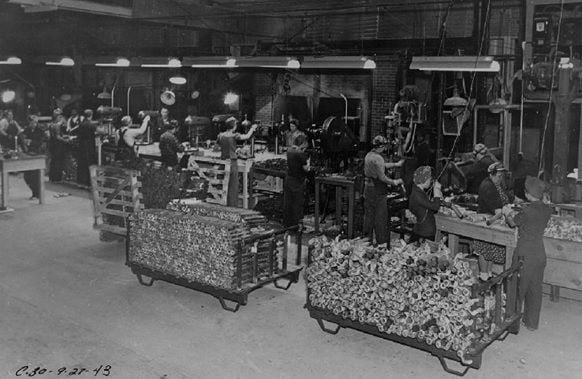 Premier Magneisa produced metal magnesium for a plant in Henderson as a major supplier during World War II.

Premier Magnesia is the only magnesium carbonate mine in the U.S.

Premier Magnesia Inc. operates the only magnesium carbonate mine in the United States, and the Nevada mine 83 miles southeast of Fallon has another distinction, as well.

“It is my understanding that the Premier Magnesia operation in Gabbs is the longest continuously operating mine in Nevada,” said Richard Perry, administrator of the Nevada Division of Minerals.

The operations in Nye County got their start in World War II, when the U.S. Department of Defense needed magnesium for metals. Plant construction started in 1941.

“There was a huge effort to get it in operation for the magnesium metal for the war effort. They essentially built it in a year or two, which was phenomenal back then,” said Lynden Johnson, who has been working at the magnesium mine more than 40 years.

He said the final war-time plan was for mining 112 million pounds per year.

Although the big push was for the war effort, the Nevada Bureau of Mines and Geology’s 2016 Mineral Industry Report states that magnesium mining at Gabbs started in 1935. The deposit was discovered in 1927, according to Premier Magnesia.

After WWII ended, the government got out of the magnesium-mining business. Yet the Department of Interior’s inclusion of the compound on the draft list of critical minerals – nonfuel minerals considered crucial to U.S. economic and national security – could bring added emphasis to magnesium.

Magnesium compounds are the eighth-most abundant element that make up about 2 percent of Earth’s crust, according to the U.S. Geological Survey.

Johnson, now a contractor with Premier Magnesia after so many years at the mine, including as the mine’s general manager before retirement, said that when he started at the mine in 1972, the operations were owned by Basic Inc.

These days, Premier Magnesia sells its magnesium-based compounds from the mine in a variety of ways and for a variety of uses.

“The biggest user is animal feed supplement. Our product is one ingredient” for the feed mix used by feedlots and dairies,” Johnson said.

The second-largest seller is a slurry product used as an acid neutralizer, such as in sewage affluent. This slurry also could be used in pit lakes, he said.

Premier Magnesia also ships product to its sister company, Giles Chemical in South Carolina, to make magnesium sulfate, known as Epsom salt, that is sold across the country. Premier Magnesia’s headquarters are in Waynesville, S.C.

The company website states that Giles Chemical is the largest producer of magnesium sulfate in North America.

“The uses have changed over the years,” Johnson said, noting that before the steel industry tumbled in this country, the mine produced deadburn magnecite for lining furnaces and high-temperature mortars for the insides of furnaces. That portion of the plant stopped when the need vanished.

Now, the company is looking at new uses, as well as selling current products, including one that can be mixed into concrete to prevent cracks, Johnson said. Another product is used to identify spills off trucks. The product shows first whether the spill is an acid or an alternative and turns colors.

“That stuff is cool,” said Johnson, who added the company also sells a product for environmental cleanup when there are heavy metals present, to neutralize them. “It’s project-specific and called EnviroBlend.”

The mines on the Nevada site are open pit, but ore is mined differently than a gold operation. There aren’t deep pits, but rather Premier Magnesia uses a selective mining process where cuttings from drill holes are analyzed for chemical content, and the drill sites can be color-coded for extraction using a map.

“It’s all invisible. The whole ore body up there is magnesium,” Johnson said, so the analysis looks for insoluble content, such as iron silica, and the lime content. “We want a low percentage of insolubles and of lime and a large percent of magnesium.”

Mining is on a need basis, depending upon orders, and in late April the ore was coming from the waste stockpiles. The mine operates on a four-day work week.

Premier Magnesia has 125 employees at the Gabbs location, which includes a mill.

Johnson said there are eight workers for the quarry, and they use five 60-ton haul trucks and front-end loaders. These eight people do the drilling, mining and crushing and haul ore to the mill. Ore goes through primary and secondary crushers before going to the mill.

The ore goes into furnaces. There are three multiple-hearth furnaces to allow for temperature control. Each furnace has 14 hearths.

“By getting precise burn, we are making a consistent and better product,” Johnson said.

Ore coming out of the furnaces is segregated by size and may go through a ball mill or a grinder to become the product Premier Magnesia sells from the site.

Production capacity is more than 150,000 tons a year at the Gabbs site.

“We sell in 50-pound bags and 2,000 and 3,000-pound bags and ship out in bulk trucks 80 miles to Fallon and load them on rail cars,” Johnson said. “There, they are shipped all over the nation. We also have customers that don’t want to pay for bagging.” Those come to the plant to load up.

Johnson’s work at the mine is now in research and development. The project is gleaning usable magnesium ore from waste stockpiles with technology that allows rock-by-rock analysis to get to the good ore.

There aren’t any major reclamation projects on-site because the operation is ongoing, but along with re-examining the waste piles for ore, the magnesium waste is used on roads and sold or given away to employees and communities, Johnson said.

He estimated mine life at another 70 years, but there are 120 years of reserves and resources.

“We’re in the middle of nowhere here,” he said.

VALMY- The Marigold mine owned and operated by SSR Mining Inc. (NASDAQ: SSRM) (TSX: SSRM), has mined its four millionth ounce of gold, a compa…

RENO — The Nevada Mining Association has announced the recipients of its annual Individual Safety Awards. The annual recognition celebrates th…

ELKO — It has exactly been one-year since Barrick Gold Corp. and Newmont Corp. combined their Nevada assets to form Nevada Gold Mines.

CARSON CITY — The Nevada State Museum will be firing up its original Coin Press No. 1 this Independence Day, giving visitors a chance to see N…

TONOPAH– The Bureau of Land Management, Tonopah Field Office, has prepared an Environmental Assessment to analyze the proposed Hasbrouck Mine …

A Premier Magnesia LLC crew mines magnesium at its operations near the town of Gabbs in Nye County.

Deposits were discovered near Gabbs in 1927, leading to the founding of Premier Magnesia.

Plant construction at Premier Magnesia began in 1941 near Gabbs.

Premier Magneisa produced metal magnesium for a plant in Henderson as a major supplier during World War II.

Premier Magnesia is the only magnesium carbonate mine in the U.S.