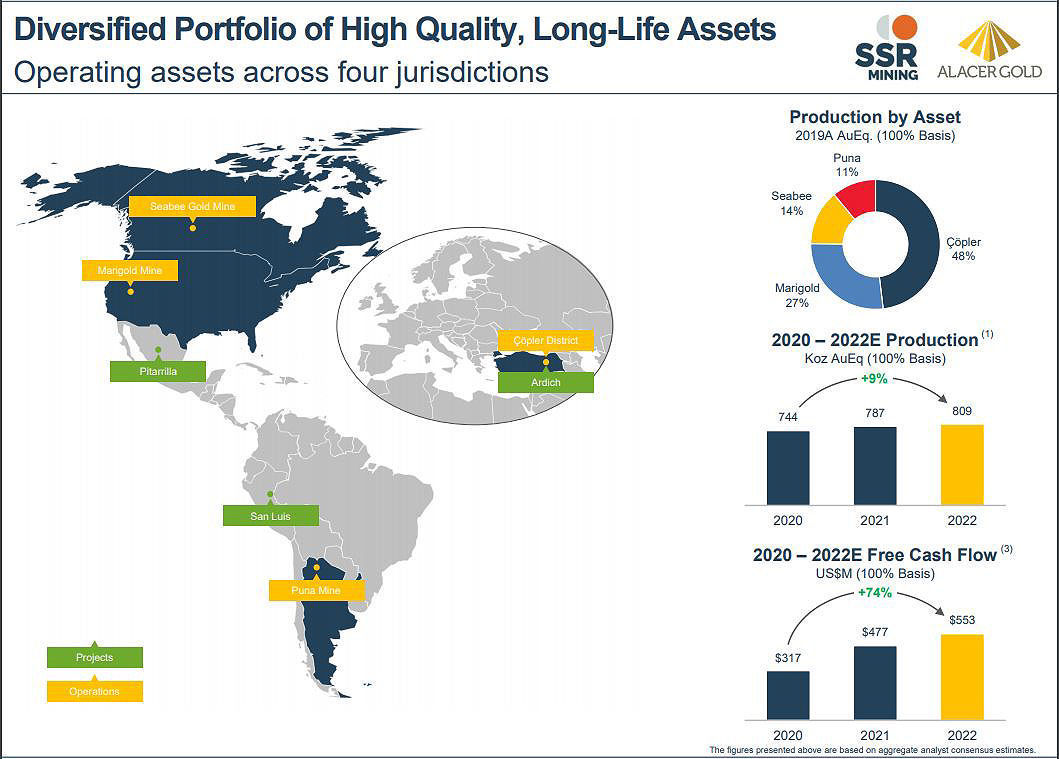 This map of the assets of the combined SSR Mining and Alacer Gold is from a PowerPoint presentation on the merger.

The transaction is expected to close following the receipt of regulatory and court approvals and other customary closing conditions.

Mining Quarterly reported last month that the companies were planning the all-stock merger,a nd would keep the SSR Mining name, and the Marigold Mine in Nevada and Marigold’s exploration potential will be a key part of the new, larger company.

SSR’s current CEO, Paul Benson, said previously in a teleconference that a synergy of the merger will be the savings on his CEO pay and possibly other executive-level changes, but both Benson and Antal said the benefits of the merger will come in the combination of skilled people rather than major financial savings.

Marigold’s land package doubled last year with the acquisition of the Trenton Canyon and Buffalo Valley properties adjacent to Marigold that were owned by Newmont Corp. The land deal was completed before Newmont and Barrick Gold Corp. formed the Nevada Gold Mines joint venture for their operations in Nevada.

The Marigold Mine is north of the Nevada Gold Mines Phoenix Mine, and is west of Battle Mountain. It has been in continuous operation since 1989.

Marigold General Manager Greg Gibson told the Free Press in an email last month that, “we currently have 430 employees and do not anticipate any changes to our workforce.”

SSR Mining operates Marigold, the Seabee gold mine in Saskatchewan, Canada, and the Puna Mine in Argentina, and Alacer brings to the table the Copler Mine in Turkey. There also is exploration potential in Turkey and SSR has two potential projects—Pitarrilla, a large silver deposit in Mexico and San Luis, a gold and silver deposit in Peru.

Michael Anglin, now chairman of the SSR Mining board, will chair the new board that will include five directors each from the two companies.

“The zero-premium merger of SSR Mining and Alacer creates an exciting leading intermediate gold producer with exceptional financing strength, robust margins, strong cash flow generation and long mine lives that will be run by highly experienced management with a track record of value creation,” Benson said in a pervious announcement.

He said the new SSR Mining will be “well-positioned to build on the strong foundations of both companies.”

ELKO – Gold prices are the highest since 2011, reaching above the $1,900 mark on Friday with the spot gold price on the New York Mercantile Ex…

This map of the assets of the combined SSR Mining and Alacer Gold is from a PowerPoint presentation on the merger.