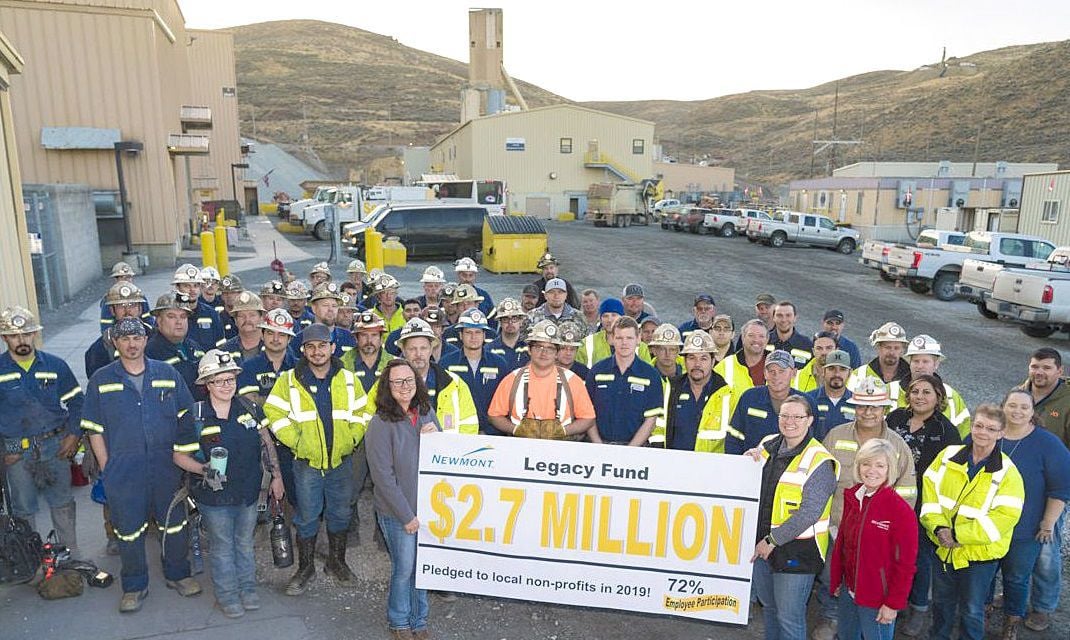 Newmont's Leeville mine employees present the total pledge and company match for the 2019 Legacy Fund on Oct. 25.

Elko County 4-H Shooting Sports contestants display their awards. Support from the Newmont Legacy Fund allows more youth to participate in the Shooting Sports project and use the equipment without having to buy their own. 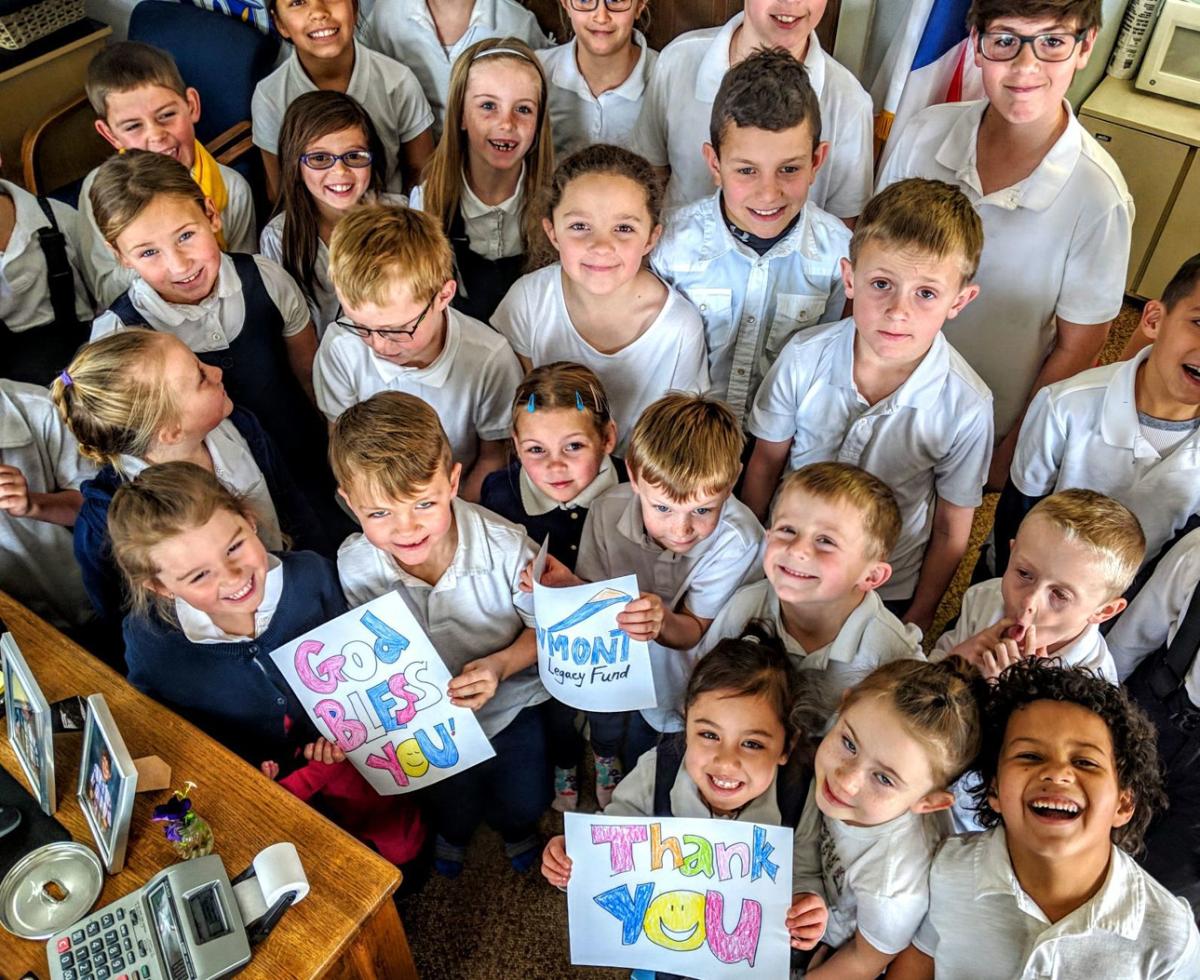 Children at the Spring Creek Christian Academy show their appreciation for the Newmont Legacy Fund. The fund gave the school a check for $30,540 last September.

ELKO — The Legacy Fund, the charitable giving program for Newmont Mining employees, has had a huge impact on local communities since the program started eight and a half years ago. So with Newmont Goldcorp now entering into the Nevada Gold Mines joint venture with Barrick, a lot of people are wondering: What is going to happen with the Legacy Fund?

Work on putting together the joint venture will continue through the coming weeks, and the details of Nevada Gold Mines’ charitable giving program have not been finalized, but recently Newmont Legacy Fund Executive Director Nancy Ostler received this statement from Rebecca Darling, head of community and corporate affairs at Barrick:

“Barrick and Newmont Goldcorp have always shared a strong commitment to community partnership and sustainability that will continue with the formation of the joint venture operation. We understand the importance of the Legacy Fund to the workforce and local community organizations. The JV plans to establish an employee gift match modeled after the Legacy Fund. We are working closely with Newmont Goldcorp to learn more about how the Fund is administered and will share more details about future employee gift match programs following the close of the JV transaction.”

Following a joint venture reception held in Elko on May 9, Barrick Chief Executive Officer Mark Bristow said, “One of the things that I’ve always believed is that our community commitments are part of an investment into the community. They should make a difference. And we’ve got our own commitments, and Newmont has as well, and we’re going to be combining that and making sure that it goes further and reaches to more parts of the community. We’re definitely not planning to cut back on our commitment to the community.”

Ostler and Lisa Becker, director of communications and external relations at Newmont Goldcorp, said these statements from Barrick are very exciting.

“We’ve realized that with the Legacy Fund,” Becker continued, “the way we developed it to be a stand-alone 501©(3) nonprofit, that created some complications in how we move forward. How does Newmont move forward with the Legacy Fund, and how does the joint venture? So we’re still working through a lot of those specifics, just to try to iron out some details. But the joint venture, as Rebecca said, will plan to have a similar program.”

“And that’s critical for our communities,” Ostler said.

The Legacy Fund kicked off in the fall of 2010 as a new charitable giving campaign for Newmont employees. Employees could give to any nonprofit of their choice, and Newmont agreed to match every dollar, with no limits on the size of the contributions. In 2011, Newmont employees gave a total of $650,000, so with Newmont’s match, $1.3 million went to nonprofit organizations, mostly in northern Nevada communities.

Since then, the Legacy Fund has continued to grow, reaching a record high in 2018, with an unprecedented 75 percent of the Newmont employees participating, giving over $1.5 million dollars, so that the total going to nonprofits with Newmont’s match was $3.1 million.

From 2010 through the end of this year, a total of more than $21 million will have been given to organizations across northern Nevada, from Winnemucca to West Wendover.

“The cumulative effect of having year after year after year of these substantial and impressive contributions to the communities has helped build more robust programs and more robust nonprofit organizations,” Ostler said. “It’s not just a one-time check. It’s been a lot bigger than that, a lot broader and a lot stronger of a foundation.”

Allowing employees to choose any nonprofit lets them give to the organizations they feel most passionate about.

“There’s no steering of funds by the company. It’s all up to the employee,” said Adrienne Green, a HR manager at Newmont. “Each employee gets to donate where it’s meaningful to them. So if they’ve had family members or they themselves have utilized services in our community and they want to give back to that organization, they can choose to do that. It’s all in their hands.”

Currently the Legacy Fund provides funding to about 350 nonprofits in the region.

Green was on the board of Newmont’s previous charitable giving campaign, and she and another woman decided to brainstorm ways to improve the program.

Green said they wanted to “get employees more excited about it, get them more engaged and get them a little bit more rooted in our communities as far as seeing some results. We came up with a plan and presented it. Today you see the results of what that plan ended up becoming.

“It’s improved over the years and Nancy and the board have done a great job of growing it each year and getting people more excited … I think that’s a key factor in its success over the years is that we as employees can see the results in the community.”

Ostler said that nationwide at companies which have charitable giving programs, an average of about 24 percent of the employees participate in the program.

To help prepare for the possibility of a future slowdown in the mining industry as resources are used up, the Legacy Fund also has an endowment fund, a nest egg which will bear interest for future charitable giving. Currently there is $2.9 million in the endowment fund. It has been growing at about $350,000 per year, with Newmont putting in $130,000 per year and the remaining amount coming from employee contributions and Newmont matches.

Some more good news that Ostler shared is that all of the money which Newmont employees and Newmont Goldcorp have pledged to give to nonprofits in 2019 – a total of $2.7 million – will continue to go to the nonprofits throughout the remainder of the year.

“I’m happy to be able to say that Newmont Goldcorp is going to fulfill the pledges through 2019,” Ostler said. “So even though there are a bunch of changes going on, the community can be assured that the 2019 pledges will be paid out. That’s a huge commitment for Newmont Goldcorp. They’ll stand by that commitment even though effectively the joint venture will have taken over. But they didn’t want to leave the community without that funding after they had already promised and committed to that funding.”

Ostler credited the success of the Legacy fund to the generosity of the Newmont Goldcorp employees and their passion for supporting their communities.

Ostler also pointed out that there are so many benefits to a program like the Legacy Fund, in addition to the obvious benefits of helping lots of local organizations. She said that statistics have shown that “the more you have employees engaged in something like this, the safer they are, and the healthier they are.”

With the Nevada Gold Mines joint venture promising to continue a giving program like the Legacy Fund, the many benefits that local communities and miners have seen through the Legacy Fund should continue far into the future.

School thanks Newmont in a big way

Merriam-Webster defines “Legacy” both as a noun and as an adjective. As a noun, “a gift by will, especially of money or other personal propert…

Nevada employees of Newmont Mining Corp. pledged $1.34 million to nonprofit organizations in the state through the 2019 Legacy Fund Campaign, …

Newmont Giving: By the Numbers

To provide community investment in its host communities across northern Nevada, Newmont Mining Corp. established two funds in 2010 supported b…

ELKO – Communities In Schools of Northeastern Nevada recently received a donation of $61,968 from Newmont Legacy Fund, the annual employee giv…

ELKO — The board of directors from the Newmont Legacy Fund visited The Terrace to personally celebrate Valentine’s Day with Elko seniors.

ELKO – Newmont donated $80,000 in June to the Elko County School District as part of its ongoing support of education.

Investing in the community

It’s time for the startup of the new Legacy Fund.

Newmont's Leeville mine employees present the total pledge and company match for the 2019 Legacy Fund on Oct. 25.

Elko County 4-H Shooting Sports contestants display their awards. Support from the Newmont Legacy Fund allows more youth to participate in the Shooting Sports project and use the equipment without having to buy their own.

Children at the Spring Creek Christian Academy show their appreciation for the Newmont Legacy Fund. The fund gave the school a check for $30,540 last September.