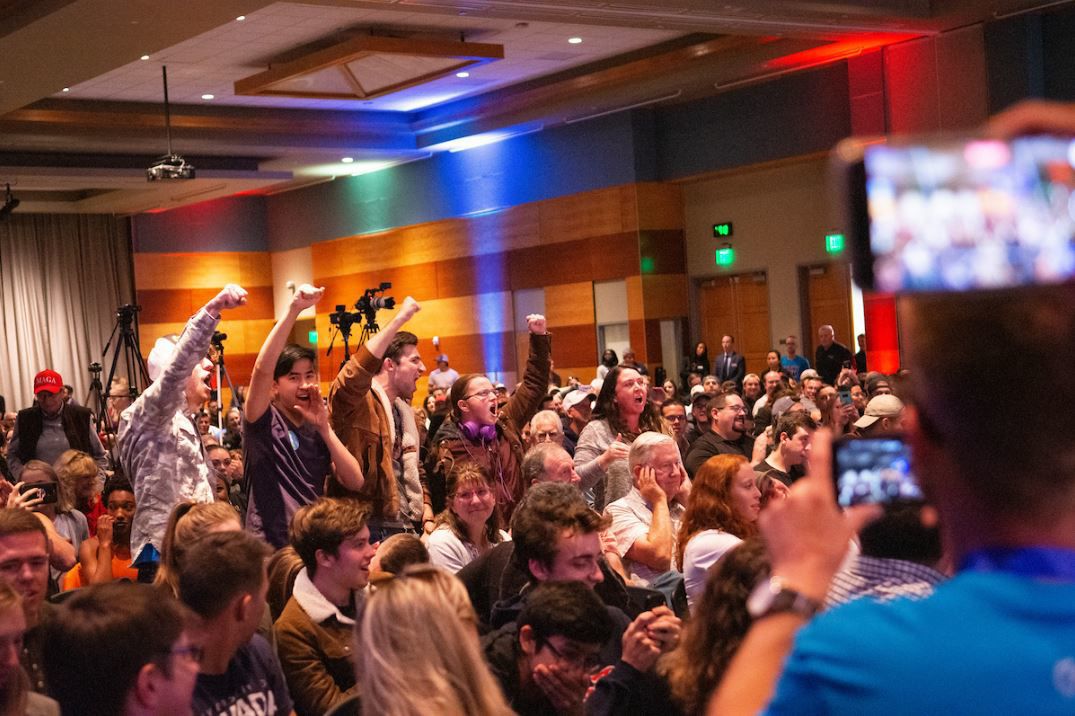 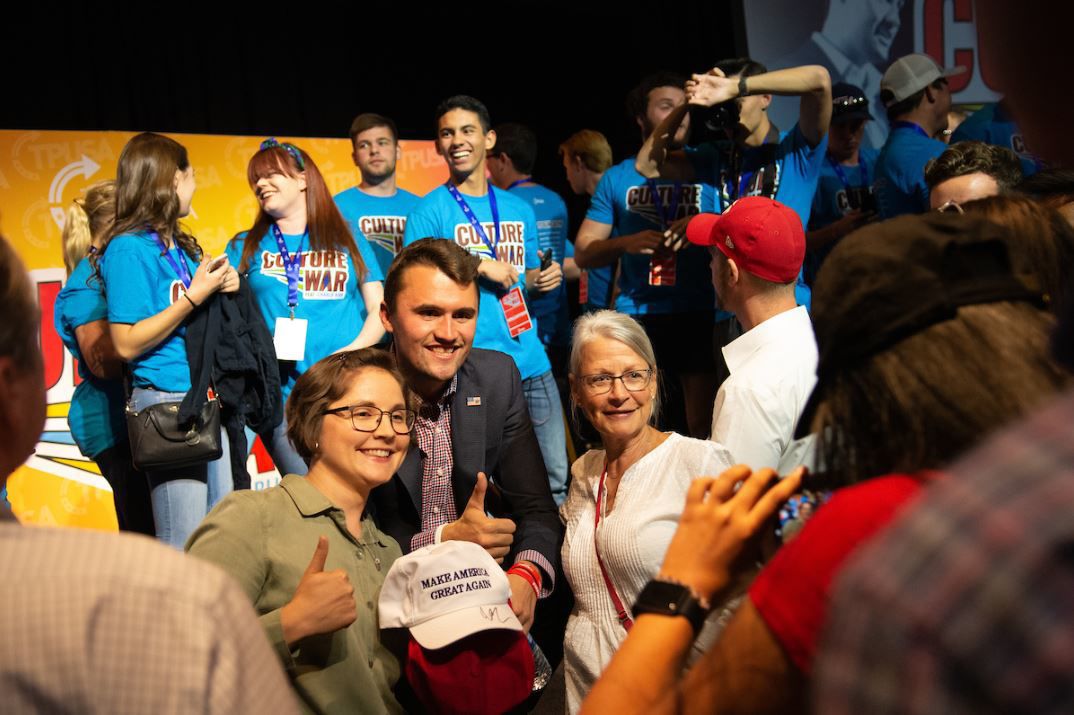 Charlie Kirk, founder of Turning Point USA, poses for photos following his speech at the University of Nevada, Reno on Oct. 7 inside the Joe Crowley Student Union. The event was the first stop of Kirk's 2019 fall Culture War tour.

Tensions flared on the University of Nevada Reno campus on Monday as conservative activist and Twitter icon Charlie Kirk spoke about what he calls a “culture war” in the United States, and demonstrators protested against the administrators who allowed him to speak.

UNR officials said more than 600 people came to the ballroom at the Joe Crowley Student Union to listen to Kirk, who is the founder of Turning Point USA (TPUSA), a conservative group with chapters at hundreds of universities. Kirk, 25, has 1.3 million Twitter followers, and his recent posts defend President Donald Trump against impeachment efforts, criticize Democratic lawmakers and cite statistics about food insecurity in Venezuela with the hashtag #SocialismSucks.

In his speech, Kirk touted “the belief that if you work hard and play by the rules your life and your kids’ life and your grandkids’ life will improve over time,” adding that “that guarantee does not exist in most of the world.”

Kirk’s “Culture War Tour,” which kicked off with the Monday event, is going to eight universities around the country and will feature Donald Trump Jr. in the upcoming stops at Grand Canyon University and Colorado State University. Recent events that Kirk has attended have sparked protests against him and his organization along with criticisms that he is linked to extremism and white supremacy.

“There have been several white nationalist organizations recruiting on our campus and we feel that administration and Marc Johnson [UNR President] in particular have not been taking substantive action against those white nationalists,” said UNR student Paige Flippin, who was protesting outside the student union. “Our side is protesting the policies that are allowing those groups to exist on our campus and just the inaction of the administration.”

The event comes at a sensitive time for race relations at the university. Several swastikas have been found on campus in recent years, and a UNR student was photographed at a neo-Nazi rally in Charlottesville, Virginia in 2017 that prompted a national outcry.

A campus climate survey released in recent weeks found that more than 25 percent of UNR students surveyed reported that they do not feel that they belong and have considered leaving the school.

A slate of campus events before and after the Kirk event included a “resist hate” teach-in at the same time as Kirk’s speech, lectures on extremism and genocide, performance art and an “antiracist poster” printing workshop.

While signs at the protests described Kirk as a “racist coward,” and Trump supporters and demonstrators outside of the student union verbally clashed before the event, Kirk said his group denounces white supremacy.

“The evil, wicked ideology of white supremacy has no place in our organization,” he said at the beginning of his speech. “We repudiate it, we reject it, wholeheartedly and completely as should any decent American.”

During the event, different groups of protesters interrupted Kirk five times with chants including “immigrants are welcome here” and banners including one that said “Abolish ICE” before being escorted out of the ballroom. The disruptions were met with counter-chants from the crowd and Kirk offering them the mic to voice their concerns.

“We have a fun thing we do at all these events which is if you disagree, you’re allowed to go to the front of the question line,” said Kirk.

After addressing the crowd about American exceptionalism, freedom of choice, and freedom of speech, Kirk opened the floor to questions. Many people stood in line waiting to ask questions with others used the opportunity to challenge Kirk and his organization.

After the event, Kirk answered questions from The Nevada Independent about his ideas and influences.

“Milton Friedman had a huge impact on my life,” Kirk said, referring to the Nobel Prize-winning economist who was a staunch advocate for free-market capitalism. “He was so instrumental, not just because of what he said but the clarity of which he talked and the whimsy that he carried and he was so contrary to everything I was hearing in middle school and high school.”

Others that influenced Kirk, he said, ranged from William F. Buckley, founder of the conservative magazine National Review, and Renaissance philosopher Francis Bacon to Socrates and Plato. When asked what makes a good question, Kirk said to come with curiosity and not combativeness.

Asked which modern politician best aligns with his views, he said Kentucky Sen. Rand Paul, pointing to Paul’s foreign policies and views on the scope of government.

TPUSA started in 2012 and is an activist and conservative nonprofit with more than 300 chapters on university campuses across the U.S., including UNR. Chapters must organize at least one activism initiative per academic semester and adhere to the TPUSA chapter code of conduct.

“Turning Point USA’s mission is to educate students about the importance of fiscal responsibility, free markets, and limited government,” the group said on its website. “TPUSA activists are the community organizers of the right.”

Another project of TPUSA is Professor Watchlist, whose mission is “to expose and document college professors who discriminate against conservative students and advance leftist propaganda in the classroom.”

Kirk is also the chairman of Students for Trump, a pro-Trump student group that is working to get the president re-elected in 2020.

If you’ve never been to a political convention or conference – and I’m talking about a multi-day/multi-speaker event, not just a rubber-chicke…

UNR: Students will not be punished for gun-related protest

RENO – On March 14, a national school walkout is scheduled to be held as a protest to congressional inaction regarding gun violence. We wish t…

In 2007, former University of Nevada, Reno (UNR) student Amanda Collins-Johnson was raped at gunpoint in a parking structure on campus — on th…

Charlie Kirk, founder of Turning Point USA, poses for photos following his speech at the University of Nevada, Reno on Oct. 7 inside the Joe Crowley Student Union. The event was the first stop of Kirk's 2019 fall Culture War tour.