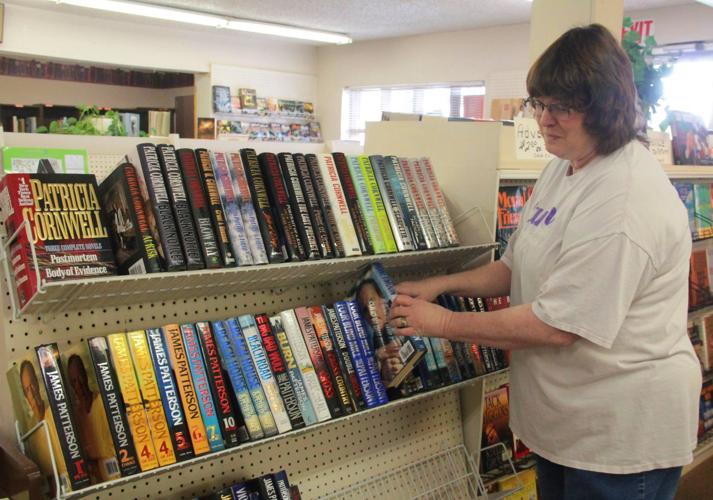 Bookstore owner Tammi Santistevan shelves a copy of a Jake Patterson novel. The store is set to close Saturday after 26 years in the same location. 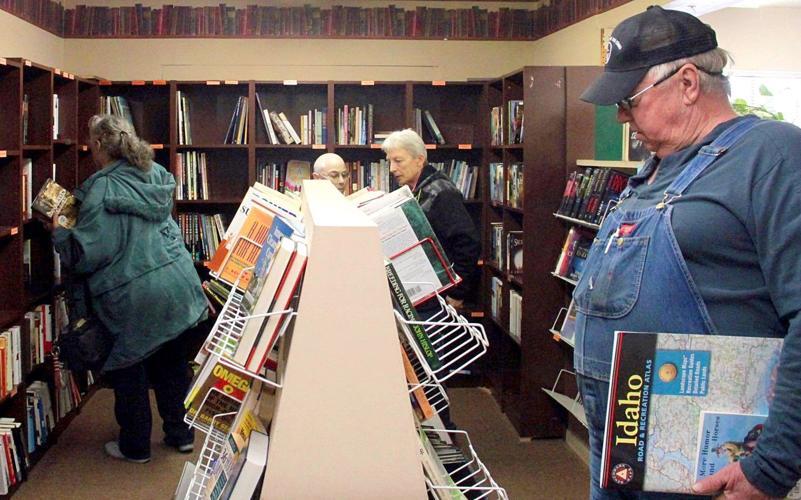 Customer Norm Culley looks over the selection of used books Wednesday in the Bookstore. Culley, along with his wife Mary and other customers, are saddened by the loss of the store.

ELKO — Loyal customers to the Bookstore are making one more trip to find a book before the store closes Saturday after 26 years in business.

The going-out-of-business sale this week includes a 35 percent discount on new books, and all used books at $1 for paperbacks and $2 for hardbacks, along with store fixtures and shelves also priced to sell.

Bought by Sandy Wilson in 1991, the Bookstore located in the Rancho Plaza sold new and used books and developed longtime relationships with customers who also took part in the used book exchange.

Tammi Santistevan bought the store from her mother in 2006, but recent trends in brick-and-mortar retail and reading habits are causing her to close the store.

“We cannot compete with Amazon and the Internet,” said Santistevan, who noted that people were coming in to take pictures of books to order a cheaper copy online.

“We can’t be a showroom and not have people buying,” she added.

In addition to changing retail habits, Santistevan also cited the use of Kindle and other electronic books for the closing, which follows generational lines.

“They’re just not reading physical books as much,” Santistevan said of the younger generation of readers.

“Our elderly customers are really upset,” she said. “They came in all the time and traded used books; the younger generation not so much. They read on their phones and tablets.”

A draw for the store over the years was the used book credit allowing customers to trade used books. Santistevan said another indicator to close was when 200 cards of customers’ book credit were found inactive and pulled from the file this year.

While national retailers have felt the impact of technology in recent years, such as Borders shutting down in 2011, smaller franchise stores also went out of business such as the Texas-based Hastings Entertainment Inc. The company, with five locations in Idaho, filed bankruptcy last year and closed all of its 126 stores last year.

In the late 1990s, the Bookstore expanded its retail space and added a coffee bar, but low sales made Santistevan scale back.

“No one else has come forward to open a bookstore,” said Santistevan.

Last summer, the Missing Text Bookstore opened in Battle Mountain, possibly the closest shop in the area for die-hard readers.

Thacker’s Timeless Treasures, also in the Rancho Plaza, will move into the location after Saturday.

Customers came in to the store Wednesday morning to look over Santistevan’s wide selection including audiobooks, science-fiction/fantasy, classics, mystery, coloring books and a room full of used paperbacks of various genres.

“I’m saddened,” said Priss McAbee about the closure. “She’s the only one that carries certain authors.”

“My grandma’s going to be really upset,” said Chancy Yates, “She’s in here once every two weeks.”

Norm Culley called the closure “terrible” as he and his wife looked over the shelves for books.

Santistevan also lamented the loss of being part of the community through donations of books to the Veterans Hospital, Elko County Jail, gift certificates to schools, and holding book signings for local authors to get them started.

The best part of the business over the years for Santistevan was the customer interaction and helping someone to find a book.

“I truly appreciate all of the business over the last 26 years,” Santistevan said. “A lot of loyal customers. I’m going to miss them.”

Skiers evacuated from lift at SnoBowl

“Thank you to everyone stuck on the lift for your patience as the crews worked as quickly as possible to get you down.”

ELKO – An Elko man was arrested on multiple charges early Monday morning after police responded to a “theft in progress” at a motorsports dealership.

Alexandra M. Molina, 27, of Elko was arrested Jan. 15, 2023, at Albertson’s for violation of probation or condition of suspended sentence, and…

ELKO – Police say they have identified the people involved in a Jan. 19 shooting on the 12th Street Bridge.

ELKO — Hello Elko readers, my name is Tiffany Williams and I am the new vice principal at Elko High School but not new to Elko County or the s…

Ukrainian soldiers at the frontline plea for Western tanks

Ukrainian soldiers at the frontline plea for Western tanks

Bookstore owner Tammi Santistevan shelves a copy of a Jake Patterson novel. The store is set to close Saturday after 26 years in the same location.

Customer Norm Culley looks over the selection of used books Wednesday in the Bookstore. Culley, along with his wife Mary and other customers, are saddened by the loss of the store.