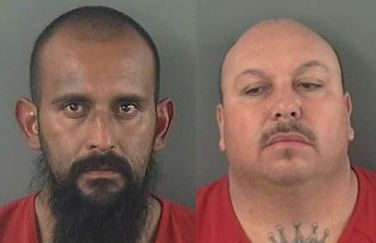 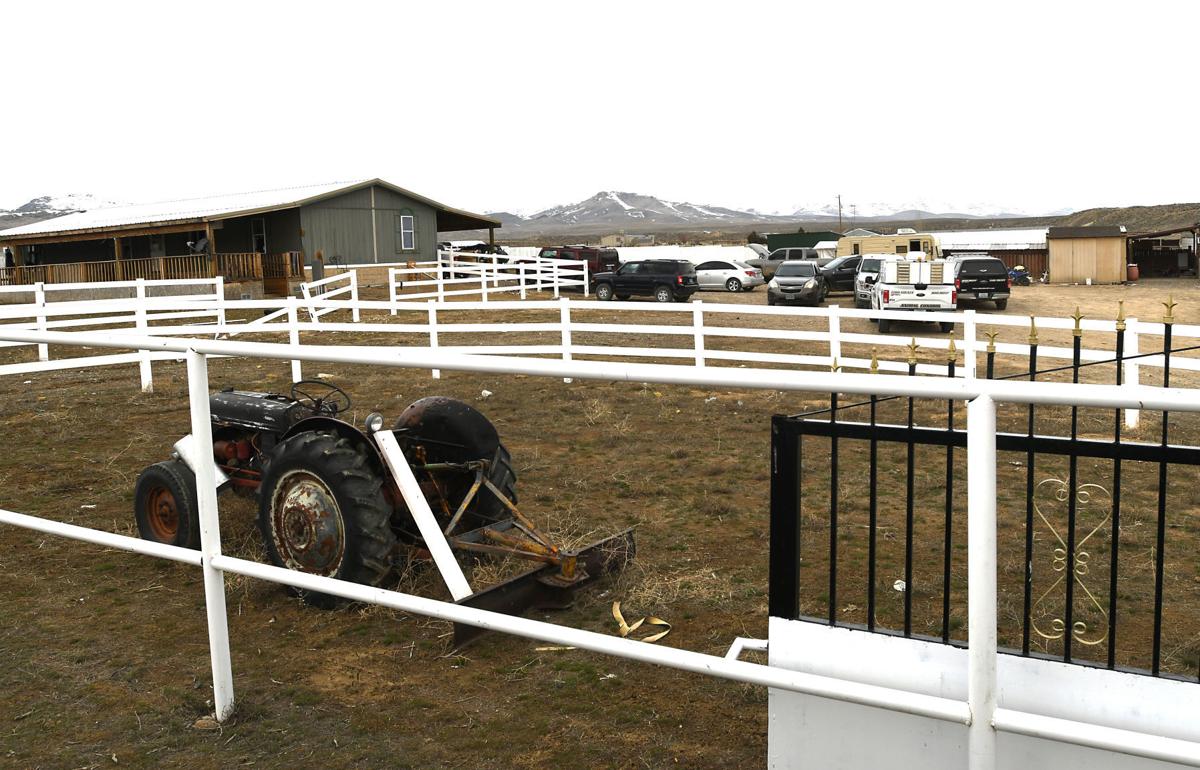 Hundreds of roosters and hens were found at this home on Kale Drive in Osino. 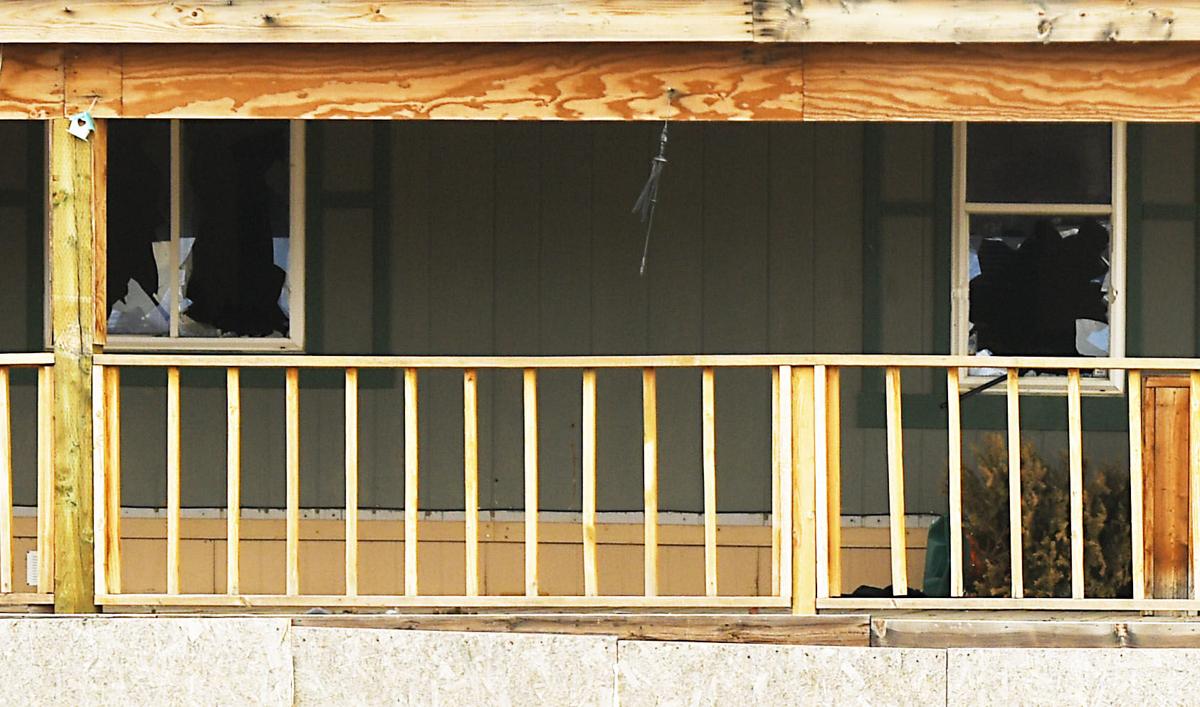 Windows are broken out at a home on Kale Drive in Osino in this March 20, 2019 photo, more than 24 hours after three men were arrested on drug and animal abuse charges.

ELKO – Two men accused of drug trafficking and running a cockfighting operation east of Elko are in district court for a trial that is expected to last three weeks.

Hector Hugo Ramirez-De La Torre and Jorge Landeros Ruiz pleaded not guilty before Judge Al Kacin to about two dozen felony counts related to drug trafficking and pitting animals — specifically chickens and roosters — against each other with the intent to fight, and the unlawful killing or maiming of said livestock.

The two men, along with Eduardo Ruiz, were arrested March 19, 2019 at an Osino residence after a raid of the property led by the Elko Combined Narcotics Task Force.

More than 500 chickens, nine dogs and four horses were also found in the raid. Under a court order, 248 roosters were euthanized along with a horse in poor physical condition.

In a sweep of the property days after the arrest, investigators found several hundred chickens, with deceased chickens still in their cages. Evidence of rooster combs and/or wattles removed from the roosters for the purpose of fighting and suffering injury was also discovered.

Eduardo Ruiz pleaded guilty to two drug charges and five charges of unlawful killing or maiming of an animal, and was sentenced to 6-18 years in prison by Kacin about nine months after his arrest.

Ramirez-De La Torre and Jorge Ruiz were scheduled for trial last summer, but it was postponed due to the coronavirus pandemic.

Barainca told jurors they would hear about the undercover operation to set up a controlled buy of drugs from the defendants, what law enforcement found during their search of the property for drugs, and the physical condition of the livestock that were discovered during the raid.

Regarding the roosters and chickens, Barainca said each animal euthanized was documented by law enforcement with a note about any physical alterations made to the birds.

Woodbury told jurors that “the defendants’ theory of defense is essentially that Mexican cartels were involved” in the case.

Ramirez-De La Torre was living in a travel trailer belonging to Jorge Ruiz on Ruiz’s property and did not receive any money from any trafficking operations, Woodbury said.

Instead, Ramirez-De La Torre was “on the bottom level” of the cartel where “you’re also told to keep your mouth shut and the penalty for that can be death. It is the case you will not be hearing the testimony from Mr. Ramirez.”

“In the end, you will see that the evidence suggests whoever the cartel member was, assuming it was anybody in the Elko area, or even from someplace else, that was the person who was making the dough and that Hector Ramirez was merely doing what he was told and how he was told and it was under the penalty of death,” Woodbury said.

Dunn opted to reserve opening statements on behalf of her client, Jorge Ruiz, and did not speak to jurors.

On Jan. 19, Kacin decided to close the courtroom to spectators as a matter of safety for attorneys, defendants, and jurors.

Citing a combination of factors due to social distancing appropriately within the smaller County Commissioner’s meeting room, Kacin stated it would be best to close the court to spectators for the protection of trial participants, some of whom have underlying medical conditions or are over 60 years old.

Conducting the trial in a larger, open space, such as the Convention Center, where other trials have been held during the pandemic, was best to give the public a view of the proceedings, Kacin said in an address to the defendants, attorneys and jurors at the end of the third day of the trial.

Within a larger venue, more people could have been accommodated safely, including spectators, he said. But due to the limitations of the county commissioner’s room, spectators flowing in and out during the trial could exceed the state-mandated 25% capacity rule enacted by Gov. Steve Sisolak during the statewide pause.

Kacin stated his judicial duty was not only to the defendants’ right to a speedy trial but to protect the attorneys, staff and jurors.

“In a perfect world that is far from perfect now, we would have a facility to try this case in over three weeks where we could have spectators. We just don’t,” he said.

UPDATE: More than 8 pounds of meth found at Osino residence

ELKO – One of three men charged with selling drugs and conducting a cockfighting operation in Osino could spend six to 18 years in prison.

“The damage to the white car was so severe that it did not seem possible that someone could have walked away from the accident without major injuries.”

Hung jury on one defendant's drug charges in cockfighting case

ELKO – The Elko County’s District Attorney’s office plans to retry a man on drug trafficking charges after jurors were undecided as to his guilt.

Hundreds of roosters and hens were found at this home on Kale Drive in Osino.

Windows are broken out at a home on Kale Drive in Osino in this March 20, 2019 photo, more than 24 hours after three men were arrested on drug and animal abuse charges.